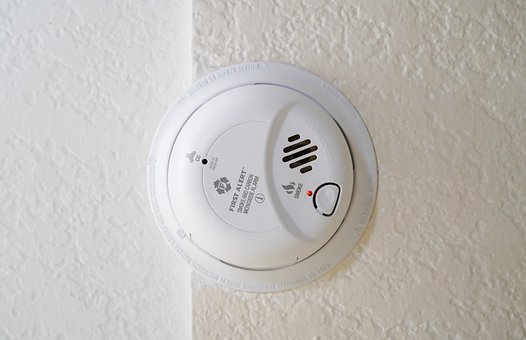 How to Change Smoke Detector Battery to Stop the Chirping

Posted at 14:00h in General by Ian Mutuli 0 Comments

First, we agree that we are not doing this because of the constant chirping at the ceiling. We change smoke detectors because the smoke alarm needs to be functional and ready when smoke is detected. Smoke alarms are the not so silent protectors of our homes, but they do a great job in ensuring we are safe all the time. Therefore, the signal to replace the battery will not be as subtle as a smoke signal, battery-operated detectors get to a point where the battery runs out, and you need to know how to change smoke detector battery sets when the time comes.

How to Change Smoke Detector Batteries

Step 1: Turn off the Power

Changing the smoke detector battery is a cool thing to do. However, you do not want to be smoked while at it. Some fire alarms and smoke detectors are hard-wired to the home's electrical system in the house. Before embarking on such activities, safety comes first. Battery replacement is not as important as your life. You would rather live with the annoying chirping noise than remain in silence some feet under forever.

Many homeowners know the wiring system or the installation method used on the smoke and carbon monoxide alarms. However, if you live in a joint apartment, you might not know the method used to install the smoke detector. Therefore, you have to be very careful when changing the smoke alarms.

You need to open the plastic cover to access the smoke detector inside. This is the part where you will truly start feeling like an electrical engineer. Screw-in your hands making repairs and being the hero of the moment. But, do feel yourself while at it.

There are different types of caps. Some caps pop off while others need a twist. Some others will require the screwdriver to access the battery. You can Google the specific model used to see how to open the smoke detector, or you can discover how the smoke alarm cap opens. Pretty sure you can figure that out.

If there were a way to fit both the new batteries and the old ones all at once, I would go for it to avoid any future chirping. Unfortunately, however, both batteries can not fit in simultaneously, and the old has to give way to the new, which is the tragedy of life anyway.

Before you remove the battery, you might want to check the orientation to be sure you will install the next one correctly. Most detectors have a more direct way of installing the batteries, but being sure about it does not hurt. You do not want to get off the ladder or table..wait, how did you get to the ceiling? We must have missed that part. You will need a strong ladder or table to step on to reach the ceiling. If there is someone around to support you, that would be great.

Back to our train of thought. You do not want to get off the ladder or table just to second guess whether you got the connection right. Let ave the second-guessing to locking doors. Once you are sure about the orientation, remove the old battery and install the new batteries. The chirping will be gone. But more importantly, the smoke detector will be fully functional. Also, the annoying chirping will be gone. Don't you feel like smashing the detector just to shut it up sometimes? I do too, but changing the batteries is the way to go.

Step 3: Put the Cap Back On

Most detectors have a test button that comes in handy when you want to be sure the detector is working. Once you have installed the new battery, it should be a no-brainer that the system will work. However, that is not always the case for a variety of reasons. For example, if the sensing chamber is the problem, new batteries will not solve that. Therefore, we need to put aside assumptions when it comes to safety matters.

Once you have tested the smoke detector, you will need to go to the circuit breaker and turn back the power on. I am sure you can not miss this step because you want to watch your favorite channel, but this time in silence. It's always the small things.

Step 5: Dispose of the Old Battery

Old batteries need proper disposal because they can be a hazard to the kids or pets. Properly dispose of the batteries you are not using and ensure none is left lying around. When changing batteries, there is the temptation to overhaul the whole house. The remote will get a battery, the modem, the toys, the other toys, and everybody will get a battery. No one buys a single piece of battery because they come in pairs most of the time. Just ensure none is lying around, new or old.

What about the Compact Smoke Detectors

The chirping has not Gone Away.

Some batteries have pull tabs that need to be removed before installation. Ensure the tabs are removed to allow the current to flow efficiently in and out of the battery. Another reason for chirping may be an expired smoke and fire alarm. When the alarm is outdated, the chirping may continue even after replacing the batteries.

Replacing your battery on a regular schedule is better than waiting for the beep to come on. For example, you can use a reminder to set the daylight savings time or set your clocks back to standard time. Of course, you do not do this often, but you can change the alarm battery when you do.

Fire and smoke alarms save lives. Half of the fire fatalities are found in houses without alarms. It would help not change the alarm because it is beeping, but rather because the time has come to do so. Your house has safety installments that ensure you're well-being. It is very common to find households with beeping alarms, and it has become somewhat a social joke. However, the underlying risk outweighs the puns, and you should do something about your smoke detector in case you need to change the batteries.