Posted at 14:00h in Architecture by Samuel Nguma 1 Comment

The Szczecin Philharmonic Hall is a thing of beauty: a bright, translucent and upstanding object. Located in Poland’s city of Szczecin, the building that was designed by the Spanish architectural firm, Barozzi Veiga, is an interesting addition that strikes up a contemporary dialogue with its context. Replacing an old concert hall that was destroyed during the Second World War, the building marks a pivotal point in Szczecin’s timeline as the city gathers its energies to be a historical, cultural and tourist destination. Surpassing worthy opponents, including the London School of Economics Student Centre by O’Donnell + Tuomey and BIG’s Danish Maritime Museum, Barozzi Veiga’s modest architecture went on to win the 2015 European Union’s most coveted architecture prize, the Mies van der Rohe Award.

This winning project finds a convincing formal and spatial strategy for a city which strives for a better future in a fast-changing economy and social patterns, delivering a dignity to urban life and the same time enhancing the city’s specific historical identity with a contemporary monument – The Jury

The architects took cues from the pitched roofs of the nearby picturesque residential buildings, the grandiosity of Szczecin’s neo-Gothic churches and the pointedness of the cranes at the city’s port; to conceptualize a mass of slender silver icebergs. Maintaining the streetscape’s height, the elevation design achieves an upbeat rhythm, finding that sweet spot between massiveness and verticality. In a city that is saturated with deep historical narratives and a ‘baroqueness’ of architectural detailing, Barrozi Veiga have made a commendable attempt to distill the most salient motifs and suggest a way forward for Szczecin’s built environment.

Visitors approach via an ample piazza that gives room for one to appreciate the vast whiteness and sublime industrial aesthetic. The entrance is purposefully aloof and understated. It is a sly move, a classic denial and reward manoeuvre by the architect to create an ‘aha’ moment once one crosses the threshold into the reception hall. If the building seems introverted from a passers-by perspective, then the reception hall goes all out! It’s a massive pristine space that toys with the senses. Light filters through the roof and one can appreciate the interplay of volumes on display. Two major staircases grace this transition space. One is large and plain; the other, sculptural and attention seeking. An eating space is tucked under a large cube-like form, next to the sculptural stair, to achieve a comfortable human scale.

The building houses two concert halls designed to host musical and cultural performances. They are accessed through various staircases and are cushioned by foyers and a host of multifunctional spaces. The principal hall has 951 seats and has been praised for its incredible acoustic ambience. The ostentatiousness of the opera houses of old is given a modern restatement by triangular gold-leaf plates that grace the ceiling plane. The walls at the front and back of the concert hall are bathed with light from skylights. As a result, during the day the play of light makes the hall gain an ethereal and golden quality. The second hall hosts 192 seats and stands in stark contrast to its counterpart – bare and pitch black.

The philharmonic hall comes packed with a host of building technology ingenuity. The building’s enclosure is made up of a double skin system that acts both as thermal and acoustic insulation. At night the facade lights up, courtesy of an intelligent LED lighting system that can be configured into different colours. Inside, the walls on the periphery of the reception hall are ‘treated’ with thin slits similar to those on the exterior. This acoustic buffer diffuses sound and gets rid of echoes; and creates a conducive envrionment for light conversation by large crowds waiting in the large foyer before an event. For an architecture that seems simple and pristine, such as this, it sure took intense design thinking to fit in a complex program and let all the obtrusive construction details fade into the background. Barozzi Veiga have added to their elaborate portofolio and set a benchmark for architects looking to design a cultural facility. 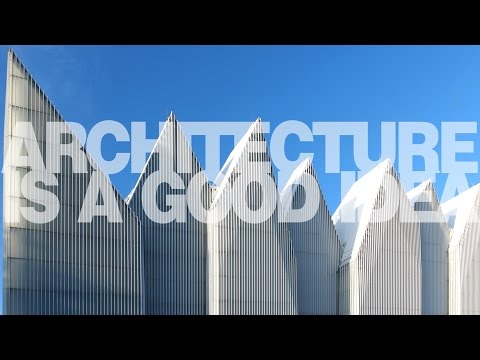