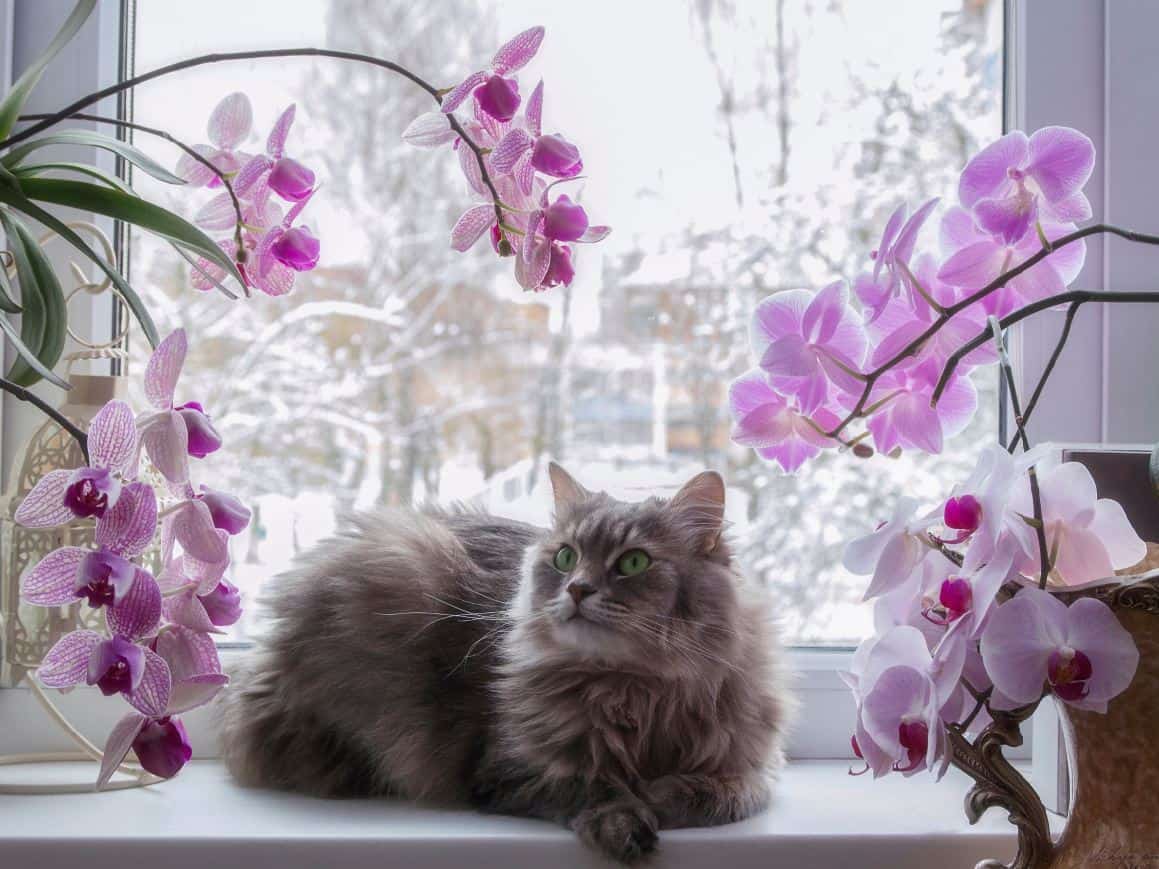 Are Orchids Toxic To Cats?

Posted at 14:00h in Garden by Ian Mutuli 0 Comments

Spring is in, and many flowers are in bloom. Many people love cats - these furry balls! On the other hand, many people also love fresh flowers- orchids, to be specific. Like many cat owners, you'd wonder whether your indoor plants and orchids are poisonous to cats.

Short answer: No. A Phalaenopsis orchid is a definite no. Not all flowers in the orchid species are poisonous or harmful to your kitty; others are quite safe for your feline friend. The sad news is that most people believe the misconception that orchid leaves are poisonous to cats and a lot of pets in general.

This also relates to the stomach upsets that cats usually experience after a good flower snack. Yes, it's a little hilarious, but cats also can't help but eat flowers at times. For this reason, they might experience an upset stomach which might require a trip to the vet if they nibble on certain plants.

This has had a lot of people assume that flowers, orchids included, are poisonous to kitties. Generally, it's not the best idea for your fluff ball to nibble on most plants, but some orchids such as Moth orchids are not poisonous for either cats or dogs. Like other flowers, a beautiful orchid makes such a gorgeous addition to your space. Orchid species are well over 25,000, and there are more than 100,000 orchid hybrids to tickle your fancy. But, you'd wonder, are orchids poisonous to cats? Are orchids safe?

But, like with everything else, there's a catch- while some orchids are safe for kitties, modern hybrids are entirely a different ball game. Some carry one specific and quite odd gene that causes problems with regards to the toxicity and poison of the orchid to cats. This particular gene may cause your kitty to suffer from vomiting, diarrhea and a stomach ache as its body tries to get rid of all the toxins in its digestive tract.

Why Do Kitties Eat Flowers?

Generally, your cat is an obligate carnivore- meaning its digestive system best digests pure animal proteins, not plants. So the only way to keep your little kitty healthy is to feed her with meat.

Fun fact- a little gross actually, but you'll live; cats in the wild consume partially digested plant matter from the stomach of their prey to help with digestion. So unlike their cousins in the wild, house cats get this plant matter from nibbling on flowers. At times, eating plants with a naturally highly insoluble fiber content can also help a sick cat vomit so that it can feel better.

Are Most Orchids Safe?

If you are thinking of getting orchids and probably wondering, "Are orchids poisonous to cats?". Phalaenopsis orchids are a great place to start; they're not only safe, but they are also easy to care for and have a way of warming up your space with such radiance for months since they bloom for several weeks.

What Toxic Plants/Flowers Are Poisonous To Cats?

Even though orchids generally aren't poisonous to cats, there are many other popular plants that are toxic and are best avoided altogether. So, when it comes to cats and flowers, which plants should be avoided?

Here's a list of several popular plants toxic to cats:

These are only a handful of toxic plants that are poisonous to cats. The ASPCA maintains a whole extensive list of poisonous plants that cats should be kept away from. This is wort checking worth checking out, especially you're a pet owner who's also a flower gardening or enthusiast.

In case your cat ends up eating plants listed here, rush them to the vet. The vet will advise you what signs of poisoning to watch out for, depending on toxicity.

According to the ASPCA, non-toxic plants that are safe for cats include:

Are roses poisonous to cats? Generally, roses are classified as non-toxic plants to cats by the ASPCA, but if ingested, they can also cause tummy upset. Additionally, not all cats will readily gravitate towards the catnip. The current estimates indicate 25-50% of cats might not be affected by cat grass or catnip at all.

How Do You Keep Cats From Nibbling On Flowers?

It's still wise to keep your cat or dog and generally pet away from all plants, including orchids, especially since you're not sure of the pesticides and fertilizers that may have been used on the orchid. Here are some ways to do that;

b) Another way to keep your cat safe is by keeping your orchid in an inaccessible spot to your pet. You can elevate them using hanging pots or hang planters. Alternatively, you can use wall-mounted vases or keep your flowers in a place or room that's off-limits to the cat

c) After checking whether it's safe for the particular plant, you can also consider mixing up a simple blend of vinegar and water. This also acts as a stronger deterrent.

d) Another way to protect your flowers and kitty is using a motion-activated pet repellent. It's an extra cost, a little pricey but it's also perfectly safe for your cat. The system uses cans that are full of compressed air, which make a loud hissing sound when the cat comes close to plants.

e) If you don't want your cat near your plants, cat caves create an attractive alternative. You can create a nice little cat cave. Creating a cozy cat cave will need a scratching post a window seat since cats love a good view. However, this is a great way to keep them engaged.

What Are Some Symptoms of Flower Poisoning in Cats?

Depending on the flower and amount ingested, symptoms vary from mild to fatal on your cat. Some symptoms include:

What Are The Levels of Toxicity In Plants/Orchids?

Not poisonous doesn't necessarily mean free of all harm on cats. There are 4 levels of toxicity, which include;

When ingested, these plants can cause cats and pets in general serious damage or illness, which may even result in death. The great news is that no orchids are listed in this category, but a lot of other houseplants are. So if your cat ingests any plant in this category, rush them to the vet asap.

This level of toxicity won't include death, but cats experience vomiting and severe diarrhea, which is another clear sign that your cat or pet has eaten a minorly toxic plant. The good thing is that no orchid is listed in this category as well, but many common houseplants are.

These are serious side effects that occur when the animal's body senses this poison and urgently needs to eliminate the poisonous matter quickly. A scenario such as this might not need you to leave the house; you can call your vet immediately and get them to help over the phone.

A common reaction that animals, experience when they ingest flowers that fall in the oxalates category, is what we'd classify as a severe allergic reaction. Pets experience irritation on their nose, skin, eyes, throat or develop mucus that makes it difficult to breathe. In severe cases, the cat's throat could swell shut.

If the vet isn't able to answer or is a little occupied, you can also contact the poison control services in your area. Again no orchids are listed in this category as well. However, orchids are definitely winning as a safe plant around your cat.

Of the 4 categories, this is the least serious but ironically the one you need to take a closer look at if you have pets at home. When animals come into contact with a toxic plant ( either through its juice, sap, or thorns), the skin can develop a blister or rash.

A common potting mix to look out for is Redwood. It'sconsidered toxic to cats but not really poisonous, and it's still used in certain potting mixes as chunks or barks. Redwood does pretty well for the orchid since it lowers the pH of the root system, which then helps with moisture control. It's commonly believed that Redwood also aids in the reduction of insects and pests that would normally infest an orchid pot, thereby letting the orchid thrive.

For humans and cats alike, Redwood has been linked to causing rashes. In addition, the fine dust that might come up while you use the potting mix can cause you eye and lung allergies. Redwood contains highly volatile oils (they easily evaporate), making inhalation while you handle this mix the main problem. Its also been proven to have toxins.

Another area of concern you might have is inflammation. For example, if your cat decides to play with those beautiful flowers that contain this potting mix and gets a splinter, then the area might get infected. Additionally, Redwood releases toxins that suppress the immune system, also making it hard to cure.

What's In Your Fertilizer or Potting Mix?

A quick search on the internet, "Are orchids poisonous to cats?" will bring up a lot of articles that show nothing wrong with the cohabitation of animals, cats more specifically and orchids. So you can certainly keep your orchids and certainly don't have to donate your little cat.

But one thing many people never mention a lot, that's also not within the orchid itself but could still harm your cat, is what the orchid is planted in. Always, take a closer look at what's been used as the potting mix or fertilizer. This is widely overlooked and can be potentially quite destructive.

Additionally, a lot of animals, cats included, always love to dig around in the soil and potting mixes. To make it safe for both you and your cat, always take a look at what's put in your potting mix. Some of the main ingredients that should be fine include;

Pesticides are common ingredients in some potting mixes that can cause severe stomach upsets. In addition, to promote exponential growth and health, a lot of potting mixes are packed up with chemical fertilizers that may be potentially harmful to home animals. It's great for the flower, not so much for the cat.

On the bright side, orchids use a special potting mix that's considered safe, but unfortunately, most houseplants don't use an orchid potting mix, and theirs may contain a lot of fungi and bacteria. Additionally, the fungi here could also affect your lungs while you pot the plants, which is why you should be wearing gloves and a mask while you handle soil.

Styrofoam in itself is not toxic or poisonous, but it can also be a choking hazard. Kittens are the culprits here since they don't have proper teeth to chew. The only way you can eliminate the risk to endangering your pet, more specifically cat, while you grow orchids, is to find a plant species that can thrive without needing to add herbicides.

Alternatively, you can only apply the fertilizer to the roots. Avoid spraying it over its foliage since it's poisonous to cats. You can also consider using natural or organic alternatives, which may be a little pricey, but might be the best solution for your furry friend.