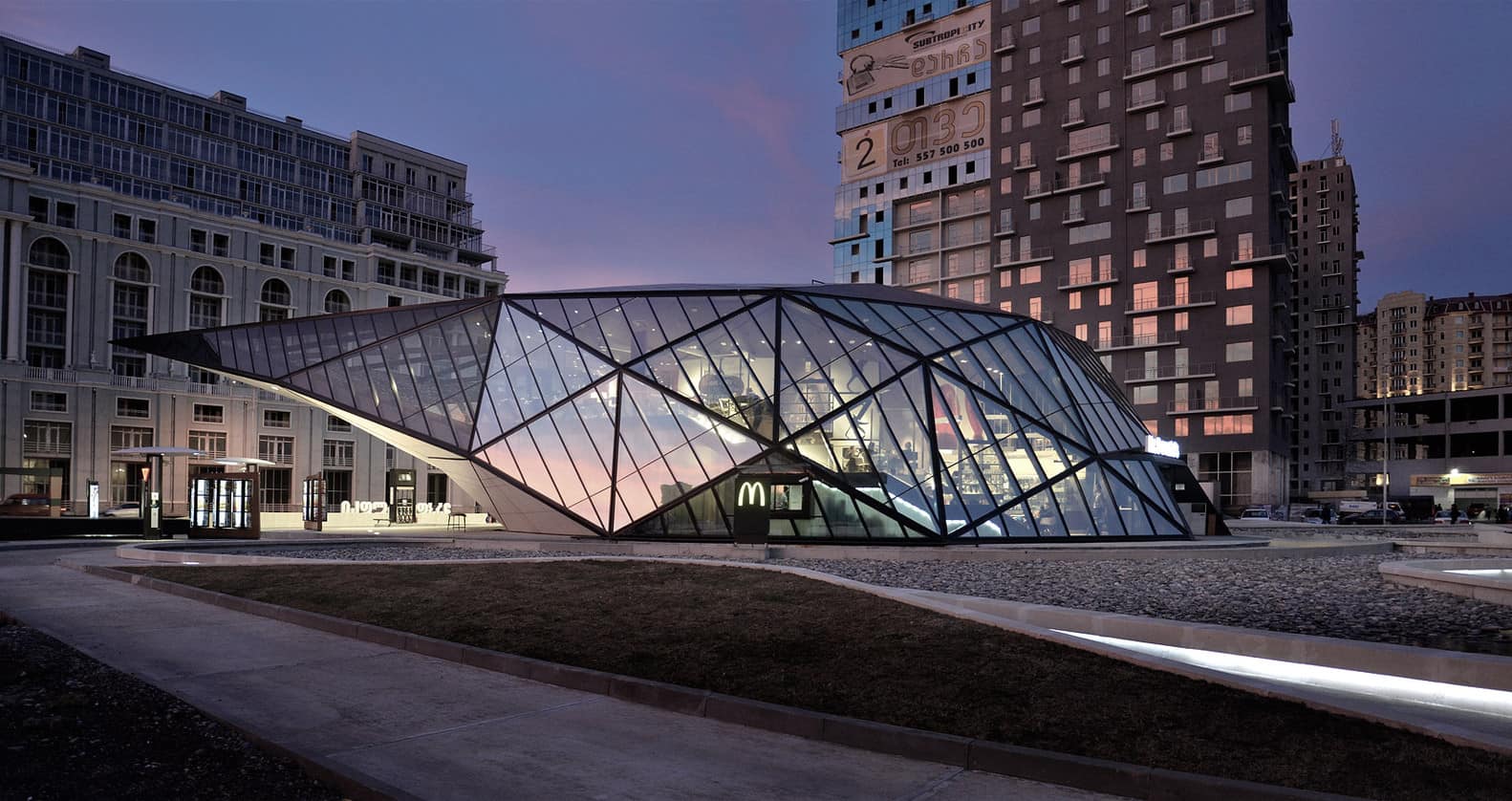 Architecture is truly the visible catapult that pushes everyday life into the future. Walking down the street and coming across such a daring piece of art awakens the urge to do something new and different. As architecture in a city advances, it gives the occupants permission to do the same. One particular fuel station in the city of Batumi in Georgia is no exception. This design by Giorgi Khmaladze is a one of a kind faceted glass shell that adds an exclamation mark to the city square. Stepping away from the traditional model used for most McDonald’s outlets worldwide, Khmaladze has created a futuristic design with a soaring structure.

It is described as a faceted glass shell that houses a fuel station, a McDonald’s restaurant, recreational spaces and a reflective pool. Its transparent facade maintains the view into the city, but first and foremost the captivating view of the water feature. By night, its transparency makes it a city landmark and reference point, like a lighthouse.

From the aerial view above, it is fascinating how the design uses hard and soft landscaping to define pedestrian walkways, separate from vehicular driveways. The structure itself is elongated to extend into a tiled canopy for the fueling section. Its angular glass exterior features a series of glass panels, 460 in number, which reflect the above skies and surrounding environment. Its core, which has washrooms and a stairwell, is lit by a skylight. A steel grid supports the dramatically overhanging roof anchored to the building’s concrete core by girders.

The building limits its footprint by incorporating all functions within. It is a perfect balance between two fueling facilities — one for vehicles and the other for human beings. Inside,the spatial disposition is in such way that then two major functions – vehicle services and dining are isolated from one another both physically and visually so that all operations of fuel station are hidden from the view of the customers of the restaurant. The bravely cantilevered steel canopy over the fueling section also has a dual function as an ecological shield for the diners on the terrace. Rather than looking down to the fueling section, the diners have a natural view of greenery and the sky.

The service and utility spaces are located on the ground level next to the fueling section for servicing purposes. The McDonald’s entrance is on the opposite end of the structure. The floor levels step gradually to give customers a smooth transition upwards to the open air patio. This patio is enclosed on the sides to protect the space from outside noise and to provide ambiance for customers.

Of course on the flip side, economically this is quite some ambitious and exaggerated architecture and engineering just for two fueling spots, parking space and a McDonald’s. It looks nothing like a home for Ronald McDonald, the clown. The yellow ‘M’, a trademark of McDonald’s is hardly visible. Furthermore, where are the golden arches? This spectacular design has neglected the familiarity and relate-ability that has built the reputation of the franchise. Also, there seems to be no provision for elevator access, meaning the patio lacks universal access.

In conclusion, the structure is outright iconic and thankfully does not bear any resemblance to McDonald’s golden arches. This facility provides two necessities in the modern western culture – a gas station and a fast food restaurant. It goes about it in such a way that raises the standards of both institutions from being just another stopover in the neighbourhood to an actual destination. I’m Lovin’ It.