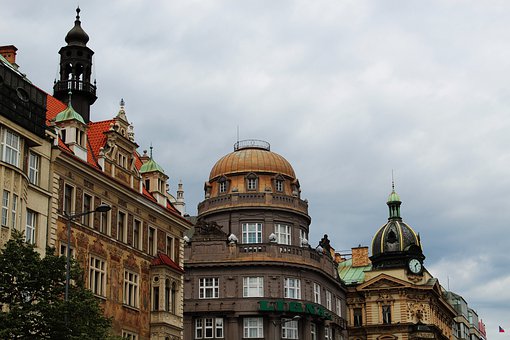 Art Nouveau, also known as Stile Floreale, Sezessionstil, and Jugendstil, is a decorative style in architecture and design that swept across the internet in the late 18th century and early 19th century. It was characterised by flowing organic shapes and curved lines based on some plant forms and flourished from 1890 to 1910 throughout the United States and Europe.

People most often used this style in interior design, architecture, glass, jewellery design, illustration, and posters. The main aim was to create a new style free from the imitative historicism that had dominated the 19th century. Architects like Antoni Gaudi and Hector Guimard became famous for their organic-inspired designs, including colourful flourishes and detailed iron and glasswork. 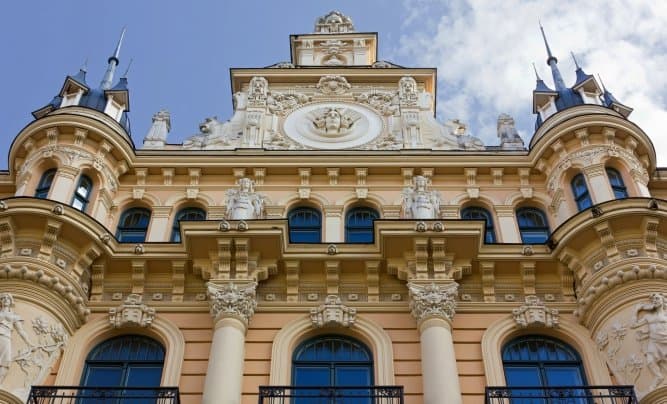 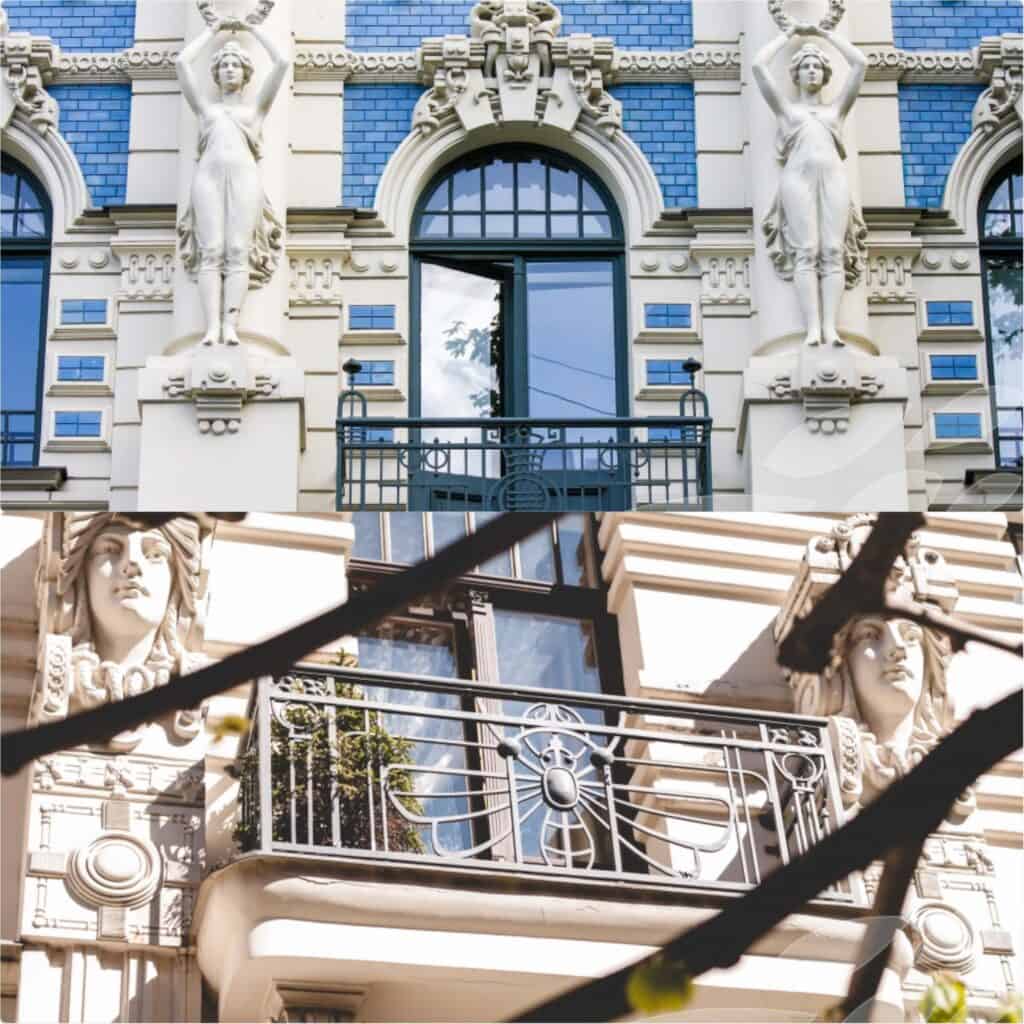 The Albert street in the Latvian city of Riga is known for its incredible amount of Art Nouveau buildings. Russian-born Mikhail Osipovich Eisenstein, a prolific designer, devised a number of these structures, including a number of the greatly ornamented apartment buildings along Albert Street. 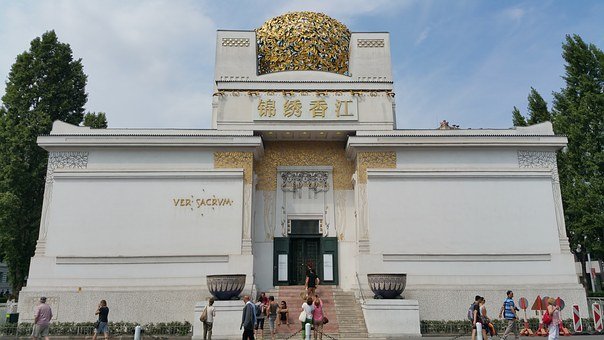 The white cubic building, which was designed by architect Joseph Maria Olbrich, was made as an exhibition hall for designers and artists of the Secessionist movement. It was opened in 1898, where the secession style was topped off with a distinctive dome of gilt. 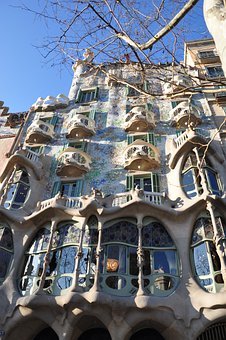 Casa Batlló, located on the Passeig de Gràcia, features allusions to the legend of the Dragon and St. George. It is one of the widely known works of Antoni Gaudi, who brought his great designs of Art Nouveau to Barcelona and has created a number of architectural landmarks around the city. The roof of this building is covered with scale-like tiles, while the exterior is designed with colourful pieces of broken ceramics. 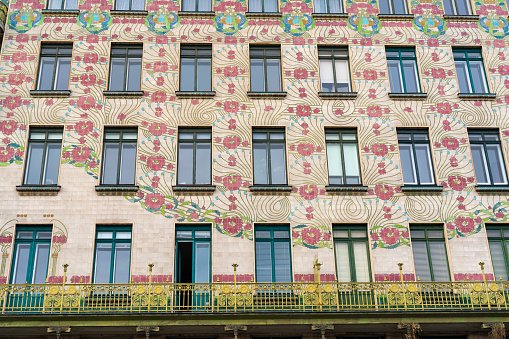 Architect Otto Wagner was a key contributor during the reinvention of Vienna at the beginning of the 20th century. Majolikahaus apartment building was one of his best architectural works. It is decorated using vibrant floral motifs and was completed in 1988. 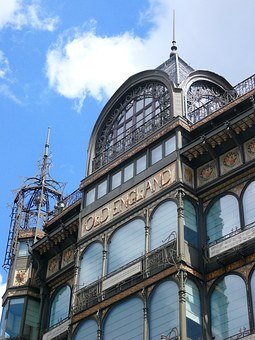 The Old England Building, which was designed by architect Paul Saintenoy and constructed in 1899, was one of the best art nouveau architecture in Brussel. Currently, it the Museum of Musical Instruments, which was formerly a department store. 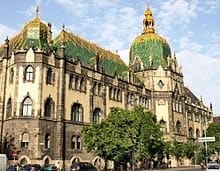 The Museum of Applied Arts building, another example of art nouveau, was designed by Ödön Lechner and constructed between 1893-1896. This building combined both Oriental features with regional styles of Art Nouveau. 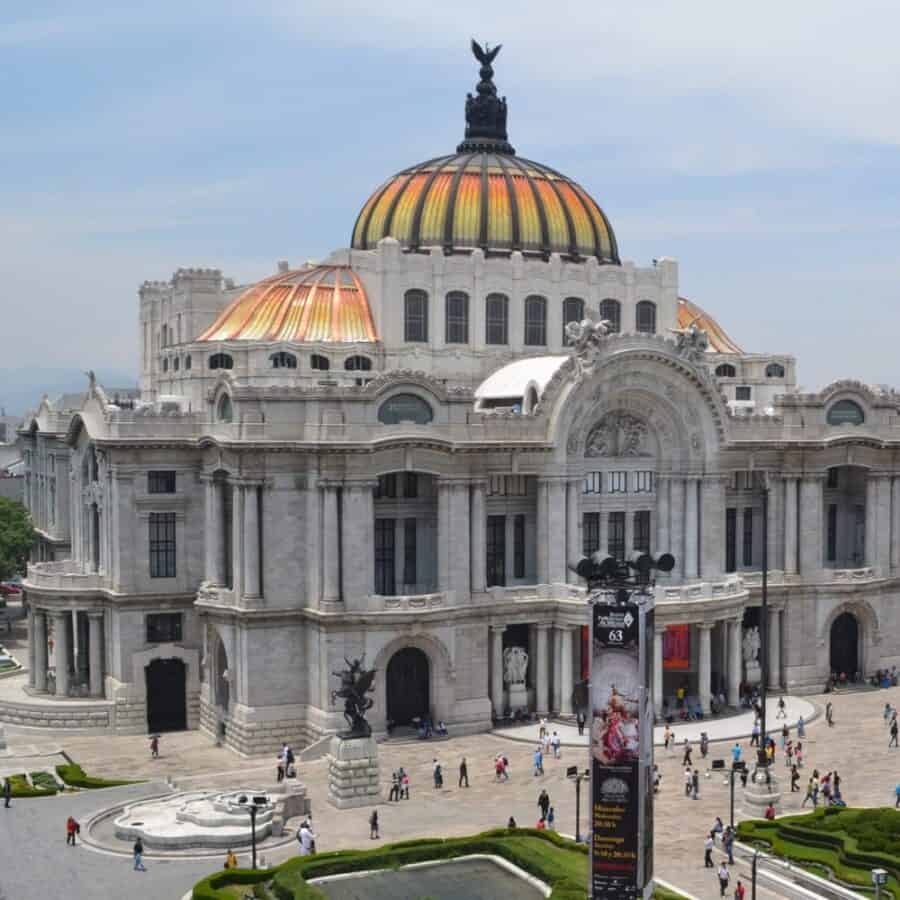 The fine arts palace in Mexico is known to be the cultural centre of Mexico. It showcases both aspects of Art Deco and Art Nouveau. 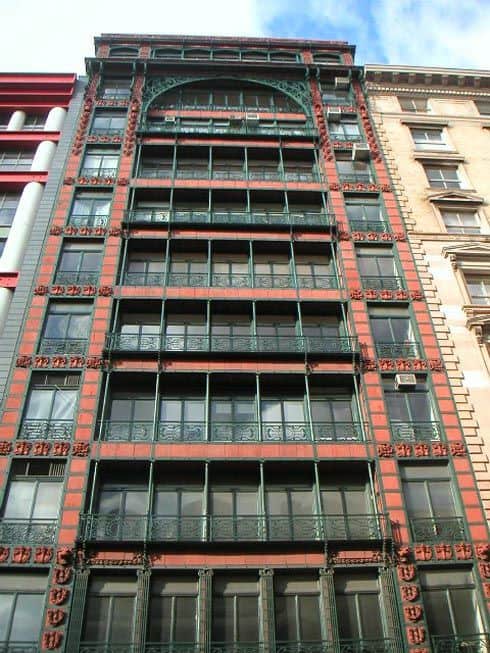 The Little Singer, 12 stories wrought-iron building, is one of the clear examples of the Art Nouveau movement that paralleled the timeline of Beaux-Arts. 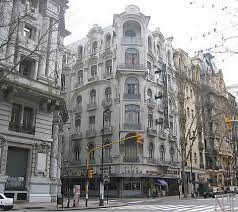 The Hotel Chile architecture art nouveau building in Argentina doesn't have many of its original ornaments due to a fire and repairs in the 1980s. However, this structure is still on Avenida de Mayo in Argentina. 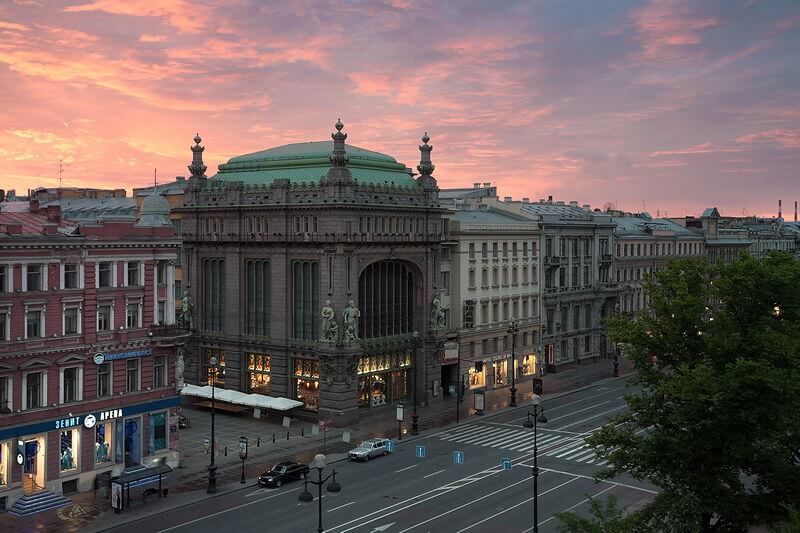 The Eliseyev Emporium is currently the home to theatre and retail spaces. The architect Gavril Baranovsky built another building for the Grigoriy Grigorievich Eliseyev family’s already large portfolio. It was temporarily named during the Bolshevik Revolution; however, it has always been known as the Eliseyev Emporium by people in St. Petersburg. 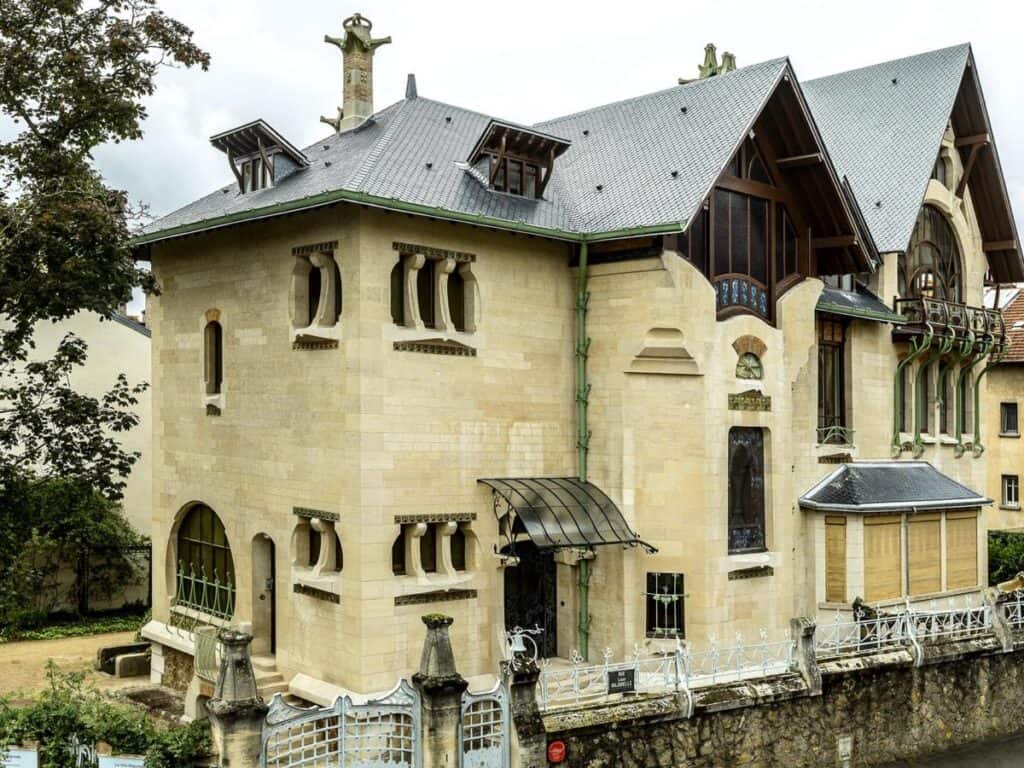 The Villa Majorelle, a French home with Art Nouveau style, was designed by Henri Sauvage in 1901-1902. It was constructed for a furniture maker called Louis Majorelle. Since the late 1970s, this building has been opened to the public. This structure sparked off new Art Nouveau ideas that architects then took up at the time. 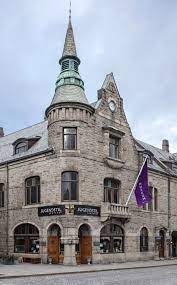 Alesund, commonly known as the Art Nouveau town, was the centre for Art Nouveau architecture in Scandinavia. It was called "Jugendstil" (Youth Style), from a popular German magazine called Jugend. In 1904, a terrible fire ravaged the city, but it was rebuilt using Scandinavian regional styles in mind. The Jugendstilsenteret is one of the city’s Art Nouveau arhitecture. 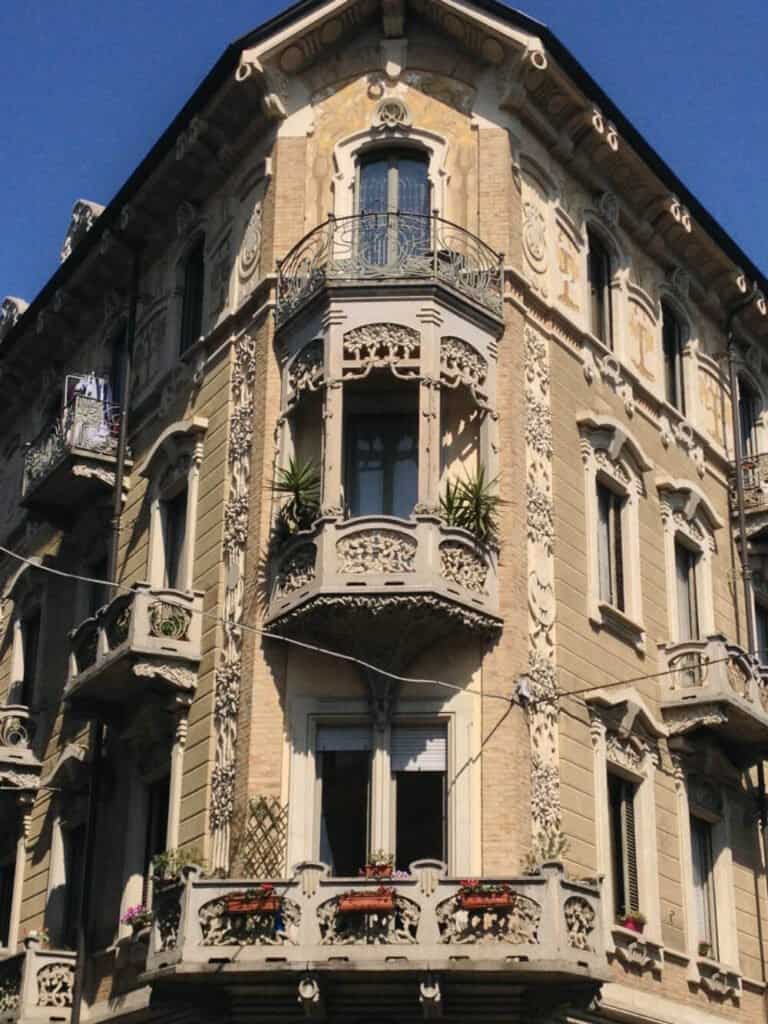 Another great architecture Art Nouveau is a building found in Cit Turin. The Casa Fenoglio-Lafleur, along Corso Francia. There are several other art nouveau neighbourhoods in Turin, most notably the dreamy villas on the other side of the Po River. 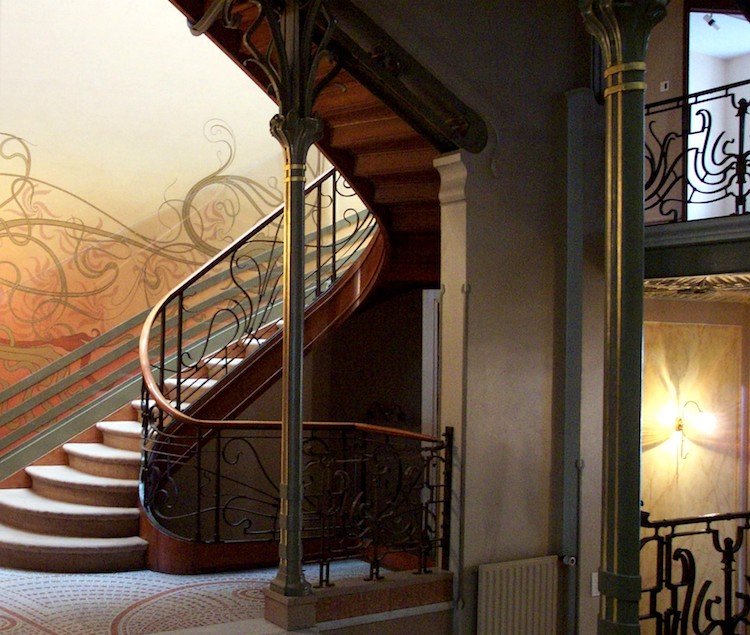 This Hotel Tassel, the Belgian townhouse building built between 1893 and 1894, was for scientists and professor Emile Tassel. The use of iron and glass building materials by architect Victor Horta has made the Hotel Tassel the first Art Nouveau architecture. It features wallpapers and interior railings with Art Nouveau patterning. 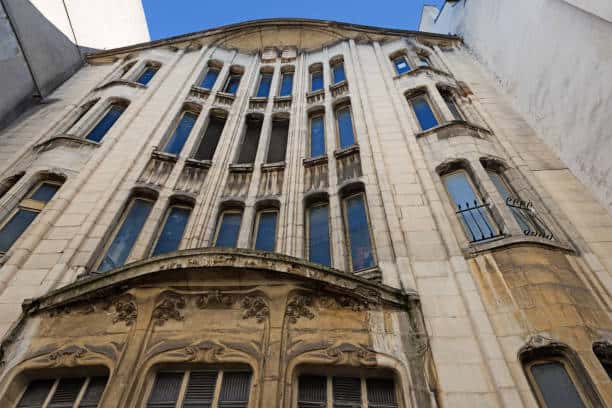 Hector Guimard, a practitioner of Art Nouveau in Paris who designed the Agoudas Hakehilos Synagogue, also known as Synagogue de la rue Pavée, is known for his ironwork in the city's metro. This structure was constructed in 1913 and featured an exterior art history that the ten commandments have inspired. 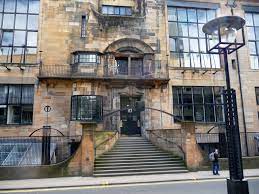 Charles Rennie Mackintosh, a Scottish architect, designed the Glasgow School of Art, which he completed in two phases. Mackintosh blended the traditional Scottish influences and Art Nouveau Glasgow style. The second phase was an iconic library that he completed in 1910. 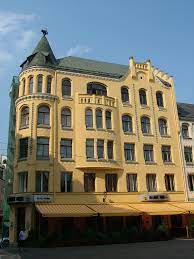 If you love Art Nouveau architecture, then Riga is one of the best places to go because it has been estimated to have one-third of the city's building constructed using this style. The cat house was build in 1909 and took its name from two cat sculptures on the roof. 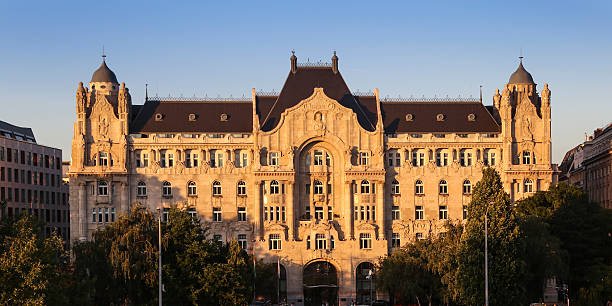 The Gresham Palace in Budapest, now called the Four Seasons Hotel, was an apartment building that was completed in 1906. The Red Army used the space on the site as an army barracks during World War II. 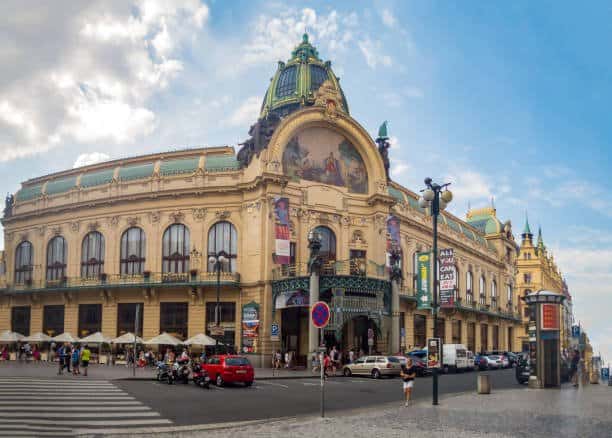 The Municipal House was built on the site of the former Royal Palace and opened in 1912. The house features ornate finishes and allegorical details that add beauty to the city. Some touches were inspired by exotic cultures, for example, the Egyptian. The building has a ballroom, concert hall, offices and cafe, all functioning even today. 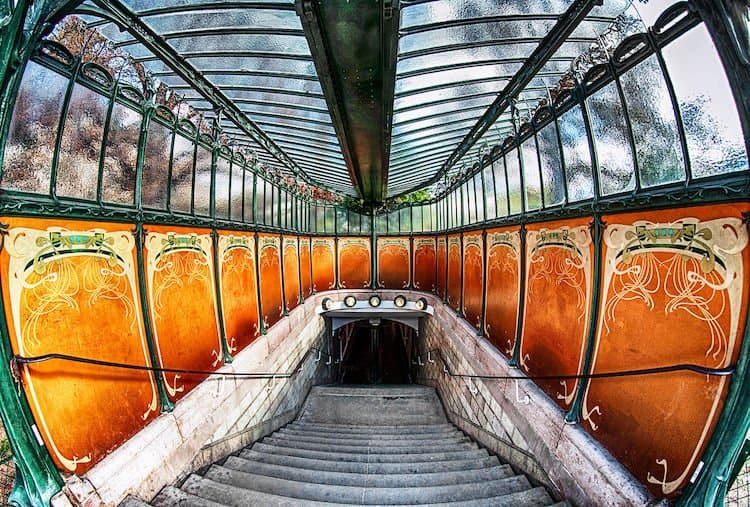 The architects installed 141 Art Nouveau metro entrances in Paris between the year 1900 and 1912. Architect Hector Guimard designed them two Art Nouveau styles, 86 of which are still available today. There were two types of entrances, without and with glass roofs, while some feature panelling with floral motifs. Today, with the roofed entryway built in 2000 at Chatelet stop, these entrances have become a symbol of Paris.