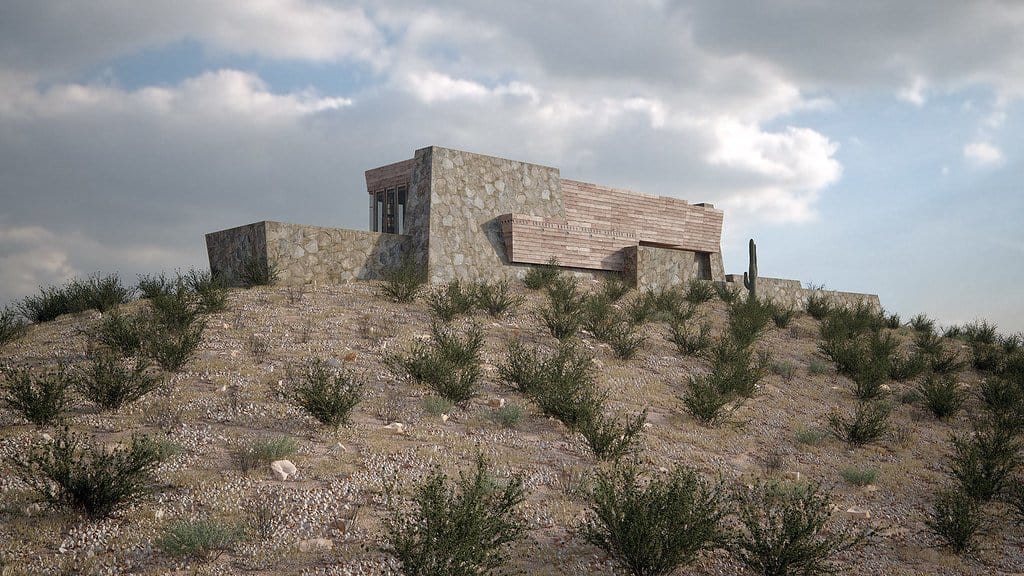 Posted at 16:43h in Features by Jacky Chou 0 Comments

Frank Lloyd Wright is a star in the world's architectural sphere because of his pioneering design philosophy, the Prairie Style. The architect was born on June 8th, 1867, in Richland Center, Wisconsin, to Anna Lloyd Jones and William Carey Wright. He spent his formative years in Madison, Illinois, where the prolific architect undertook his education.

Frank Lloyd Wright caught his big break when he started at an apprenticeship program in Adler Sullivan, a Chicago-based firm. He worked there for years under the tutelage of Louis Sullivan, where he sharpened his talents. Later on, the budding architect got a loan to buy land in Oak Park, Illinois, where he built his studio and home.

The Prairie Style of Architecture 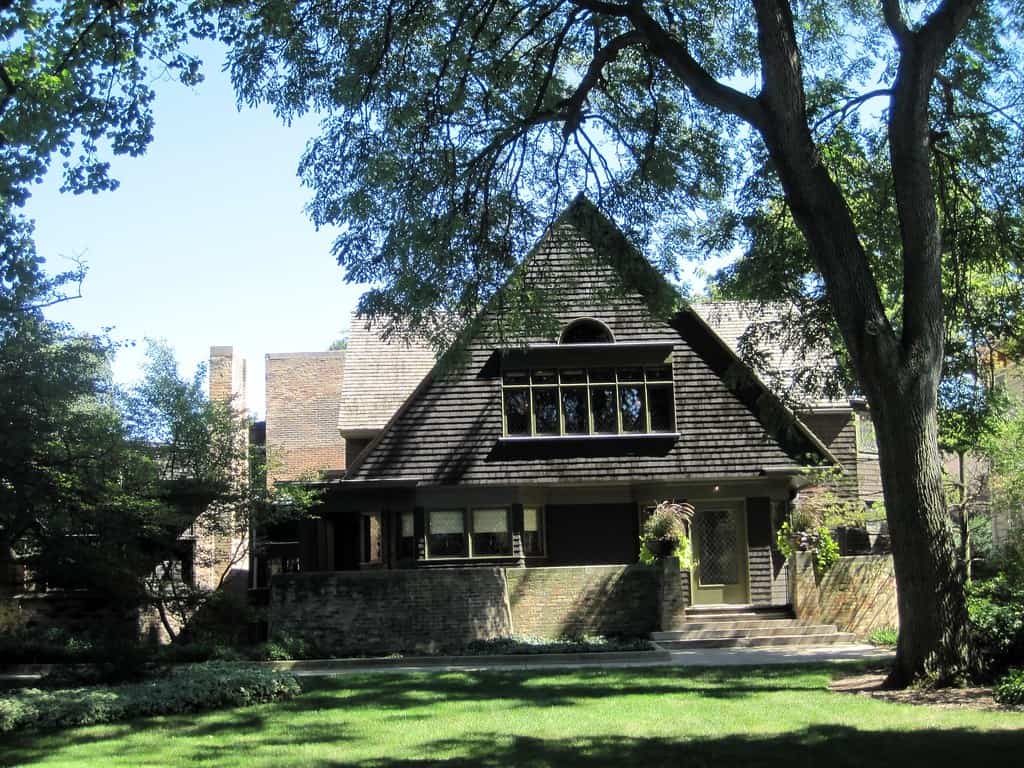 Frank Lloyd Wright's architectural firm, established in 1893, purposed to pioneer a new take in domestic architecture that represented the broad, flat landscape of the American Midwest. He believed buildings should be molded after the environment where they are built. Thus, the Prairie School focused on evoking the vast flatlands of the area in their structures.

You can see these influences in the striking horizontal lines and structures Frank Lloyd Wright's buildings are known for. Moreover, the legend's belief in individualism ensured that he found a way to create uniquely American works in their space, form, pattern, and movement. Still, this need for self-identity caused friction between him and the American Institute of Architects, where he refused to become a member.

Although the prolific architect died on April 9th, 1959, his works survive in archives managed through the Frank Lloyd Wright Foundation partnering with the Museum of Modern Art and the Avery Architectural and Fine Arts Library.

We have compiled a list of 8 iconic structures that showcase the genius of Frank Lloyd Wright.

From his studio in Oak Park, Illinois, Frank Lloyd Wright began to cultivate his unique architectural philosophy while designing buildings on the side. He had an inclination towards the finer things in life, and this disposition ensured he was always short on funds. However, the practice he got from his side projects allowed Wright to formulate his architecture design philosophy called the Prairie School.
Table of Contents
The Prairie Style of Architecture
8 of the Most Iconic Buildings by Frank Lloyd Wright
1. Solomon R. Guggenheim Museum in New York
2. Fallingwater in Pennsylvania
3. Taliesin in Spring Green, Wisconsin
4. Taliesin West in Scottsdale, Arizona
5. Frederick C. Robie House in Chicago, Illinois
6. Unity Temple in Oak Park Chicago, Illinois
7. Hollyhock House in Los Angeles, California
8. Grady Gammage Memorial Auditorium in Tempe Arizona

8 of the Most Iconic Buildings by Frank Lloyd Wright 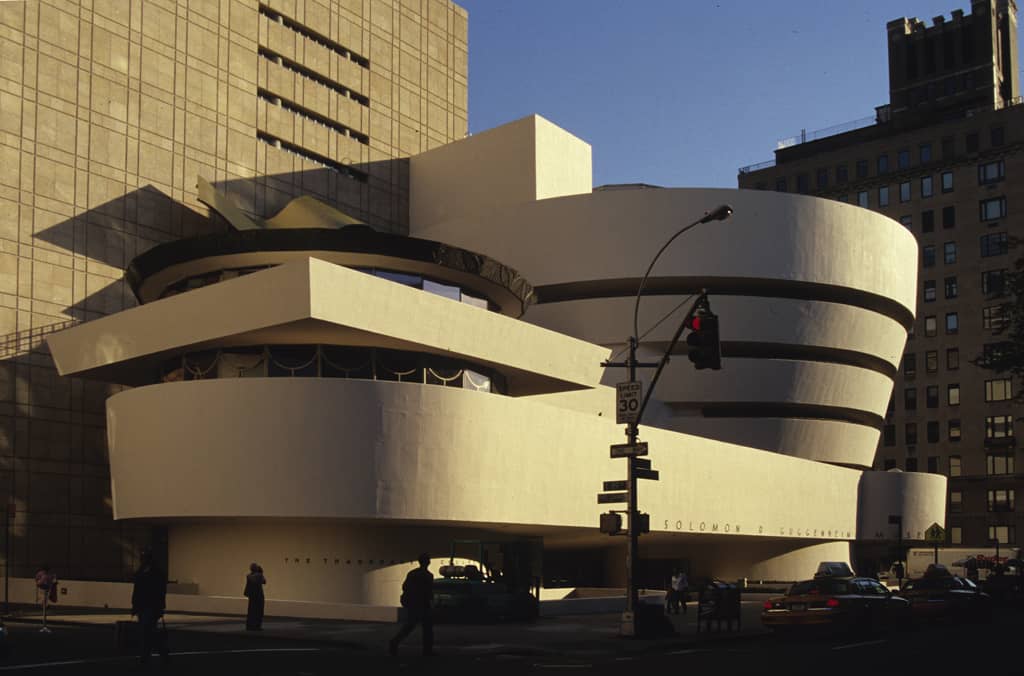 Commissioned in 1943, the Solomon R. Guggenheim Museum is a cultural monument that shows the culmination of Frank Lloyd Wright's career. The inverted-ziggurat design features modernism, pioneering use of space, a spiral ramp and a domed skylight. To this day, visitors are impressed by the expressive yet acutely personal museum.

The spiral movement within the building means that art is displayed along the concave walls of the museum. Consequently, the modern architectural monument tends to outshine the pieces displayed there. Critics of Frank Lloyd Wright claim the building has failed in its core purpose.

The Solomon R. Guggenheim Museum was renovated then opened to the public in 1992. In 2008, the structure was designated as a National Historic Landmark and eventually became enlisted in the UNESCO World Heritage List in 2019. Frank Lloyd Wright has inspired generations of museum architects to think outside the box. 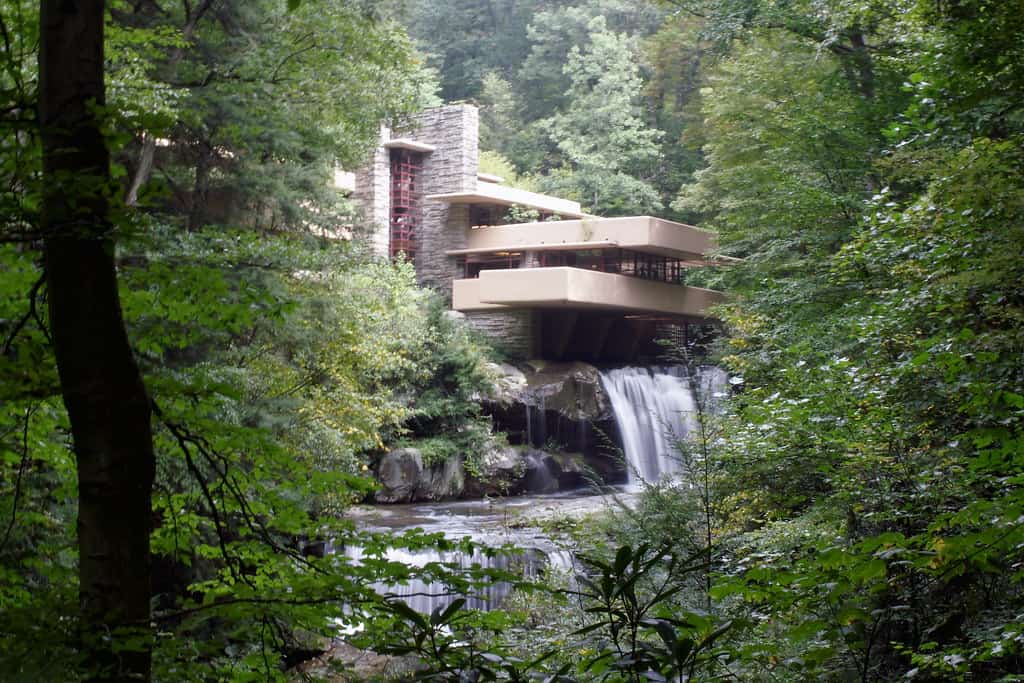 When the Kauffmann family commissioned Frank Lloyd Wright to construct a weekend residence, they wanted to have a fantastic view of the waterfalls. Their property was located on the most breathtaking site and they wanted the experiences while inside.

However, the brilliant architect sought to blur the lines between indoor and outdoor spaces with a modern structure. The result was a legendary work of architecture that effortlessly merged with its surroundings.

Since Frank Lloyd Wright believed that any construction should mimic its underlying landscape, the Fallingwater home is a fantastic example of the Praire School of architecture philosophy. If you tour the building today, you will witness the seamless way it captures the natural world in the materials, colors and forms.

Later the Fallingwater property was turned into a museum that is open to the public. People can visit and marvel at one of the buildings that cemented Frank Lloyd Wright's name in the halls of fame for America's architects. 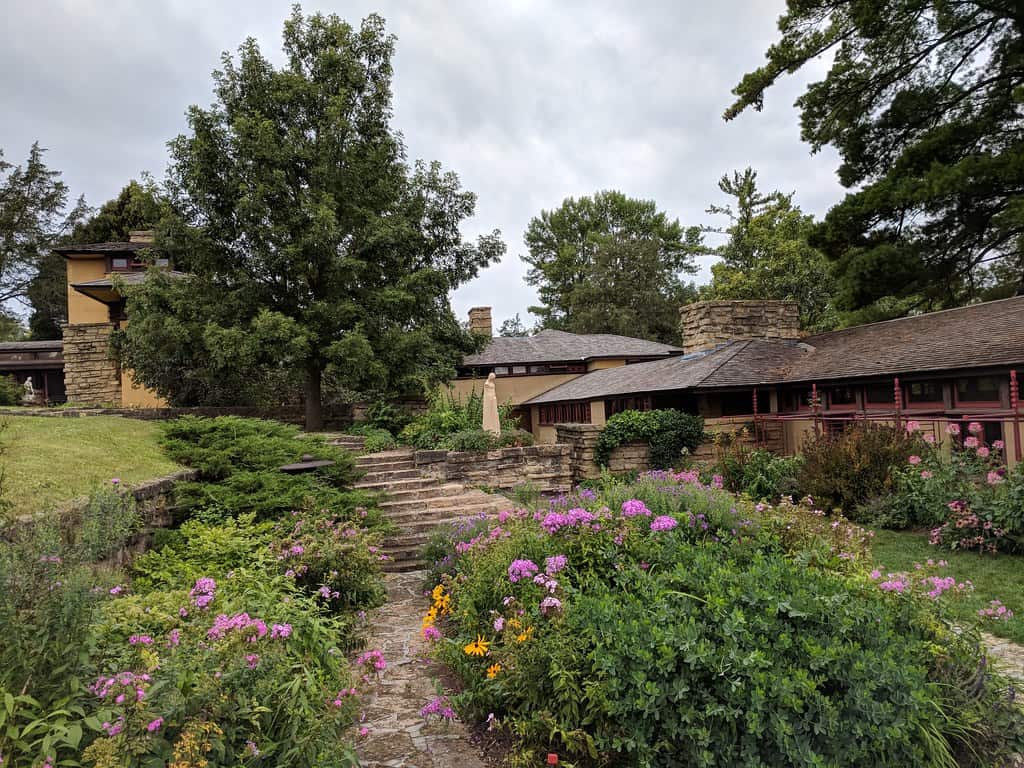 In 1911, Frank Lloyd Wright started design work and construction on a new house called Taliesin in Spring Green, Wisconsin. The name is a Welsh word that means 'shining brow' or 'radiant brow'.

Thus, this structure became the Hillside Home School, home and studio of Frank Lloyd and other architects to come and test out architectural ideas.

The expansive 600-acre Taliesin property is a testament to the legacy of Frank Lloyd Wright as it was designated a National Historic Landmark and later a UNESCO World Heritage Site. Today, you can tour the houses in the area and take in the Prairie Style's uniqueness. 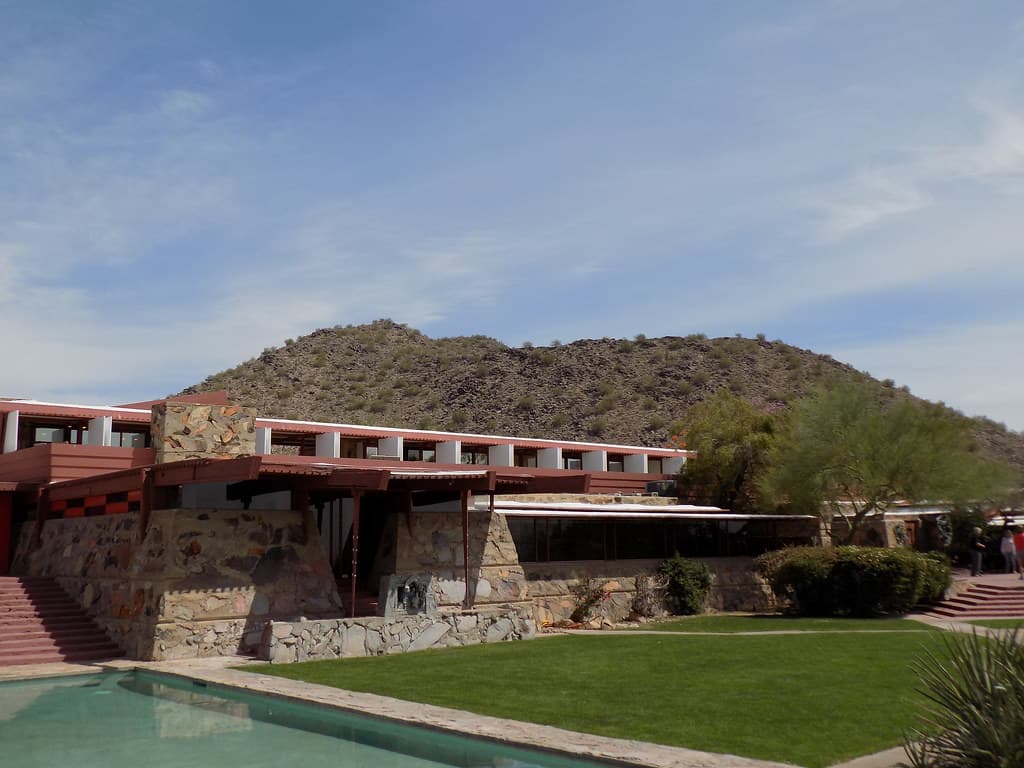 The Taliesin West is one more building that portrays the legacy of the Prairie School because of its undeniable connection to its surroundings. Built on the expansive deserts of Paradise Valley in Scottsdale, Arizona, the structure became Wright's family residence from 1937 to the end.

Frank Lloyd Wright, and his students, started design and work on the building using locally sourced materials. The desert masonry included sand, stone, and rock that mimicked the landscape, animals and plants of the area.

The Taliesin West highlights Wright's career as a seamless blend between buildings and their environment. The stunning work of architecture today serves as the headquarters for the Frank Lloyd Wright Foundation. 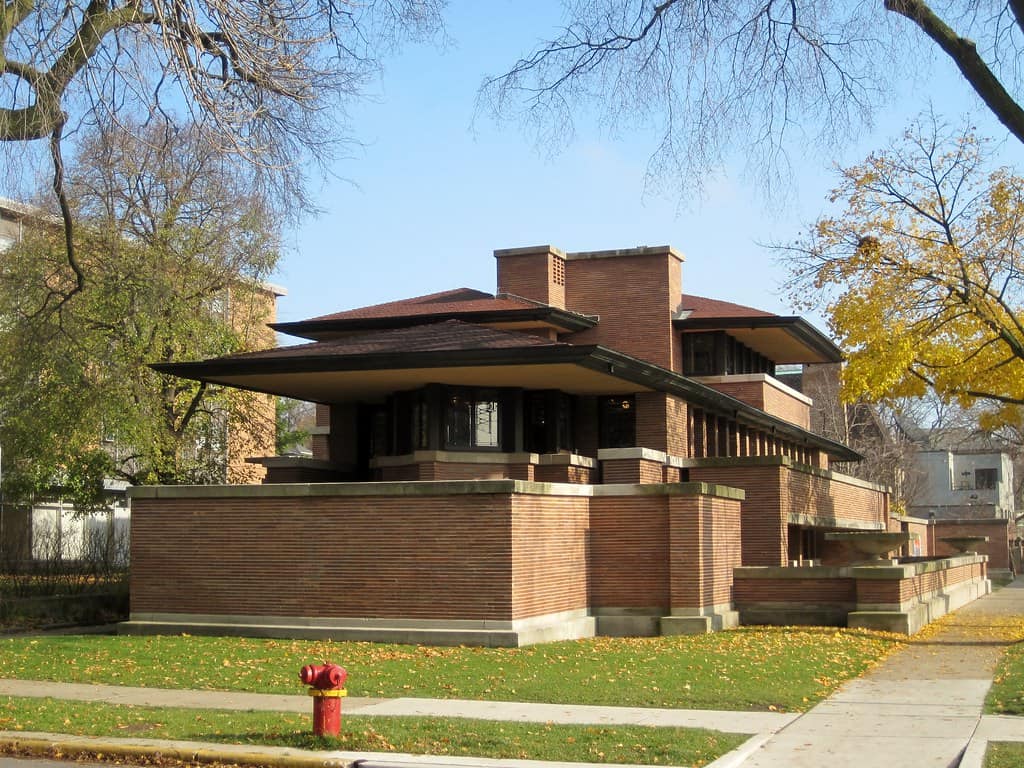 The Frederick C. Robie House is a prime example of American architecture. The masterpiece illustrates Frank Lloyd Wright's Prairie style as a product of the Midwest landscape and American culture. As such, the building brings together exterior and interior elements to create a seamless work of art.

The building emphasizes horizontal lines through the bricks, support joints and projecting cantilevered roof eaves that all focus on the chimney. Plus, the artistic window bands and piers established the legacy of the architecture philosophy. The Frederick C. Robie House was one of the last Prairie houses that Wright worked on late in his career. 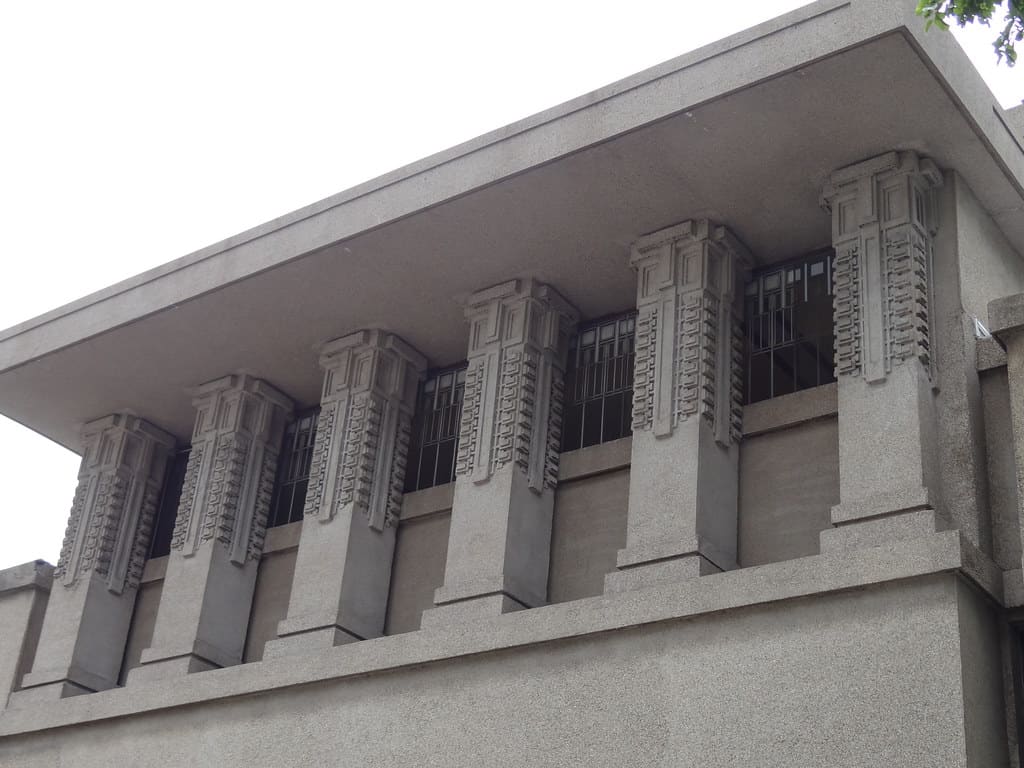 Unity Temple inspired generations of architects in the 20th century as the forerunner to modernist movements. This work was challenging to Wright as he needed to overcome the noisy street and corner to create a quiet place of worship. His response was thick walls with slight openings and a magnificent skylight.

The internal volume further emphasizes the theme associated with Frank Lloyd Wright in the horizontal planes. Furthermore, the architecture looks like it belongs in the bustling streets of Chicago.

Wright's mother, and her liberal religious movement, found a new home in the church after their's had burnt down. The design work stands tall as an unconventional but modern place of worship. 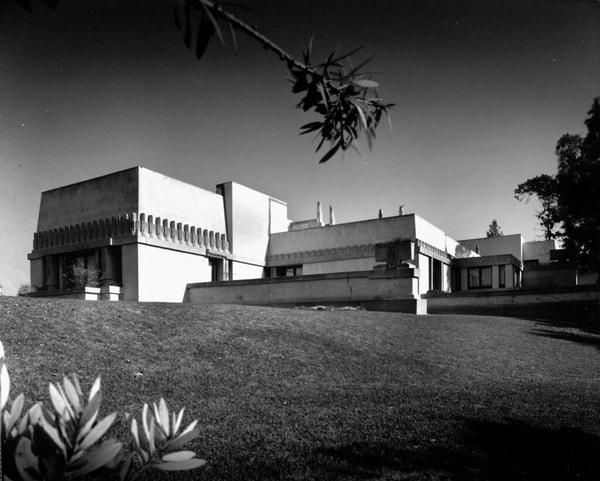 The West Coast Hollyhock house combines Mayan Revival architecture with the Prairie Style philosophy. The combination of the two design schools of thought was known as the California Romanza architecture style. 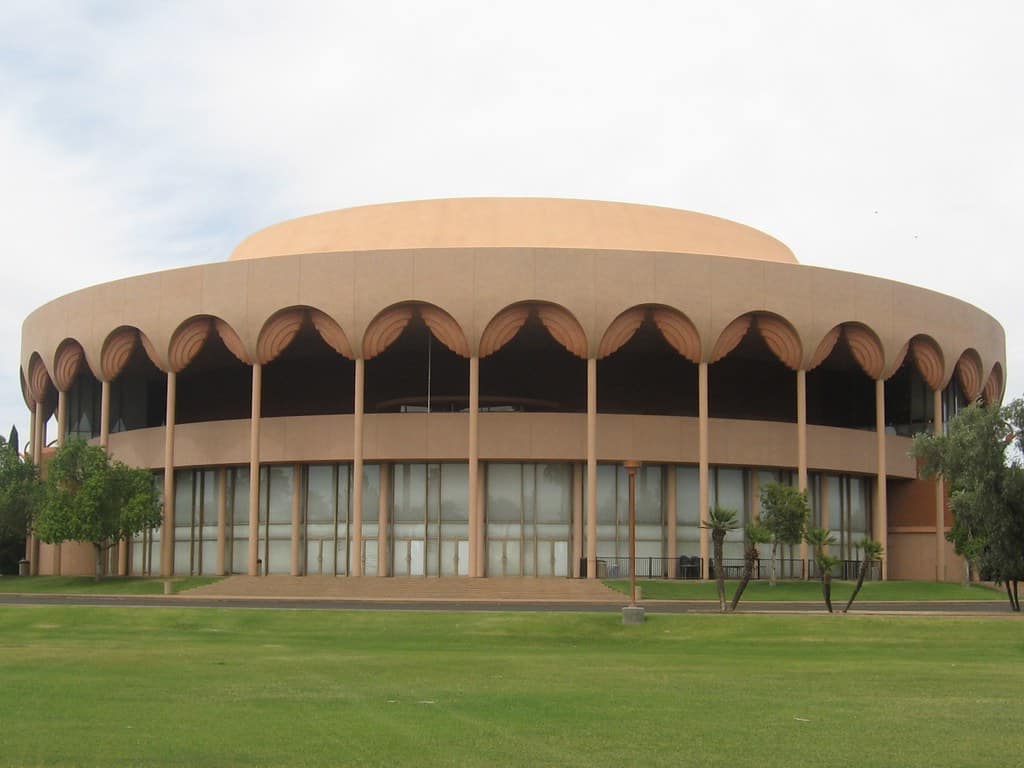 The Grady Gammage Memorial Auditorium was Frank Lloyd Wright's attempt at recreating an opera house design whose time would have never come. The original client for the Baghdad building was assassinated, and Wright seized the opportunity to modify the work and adapt it for the Arizona project.

The Usonian architecture style of the auditorium features two circles that house all the sections. The intelligent design of Lloyd Wright ensured that sounds from the stage would envelop the audience. Unfortunately, the legend passed on before it was completed, but capable architects finished the interior design.