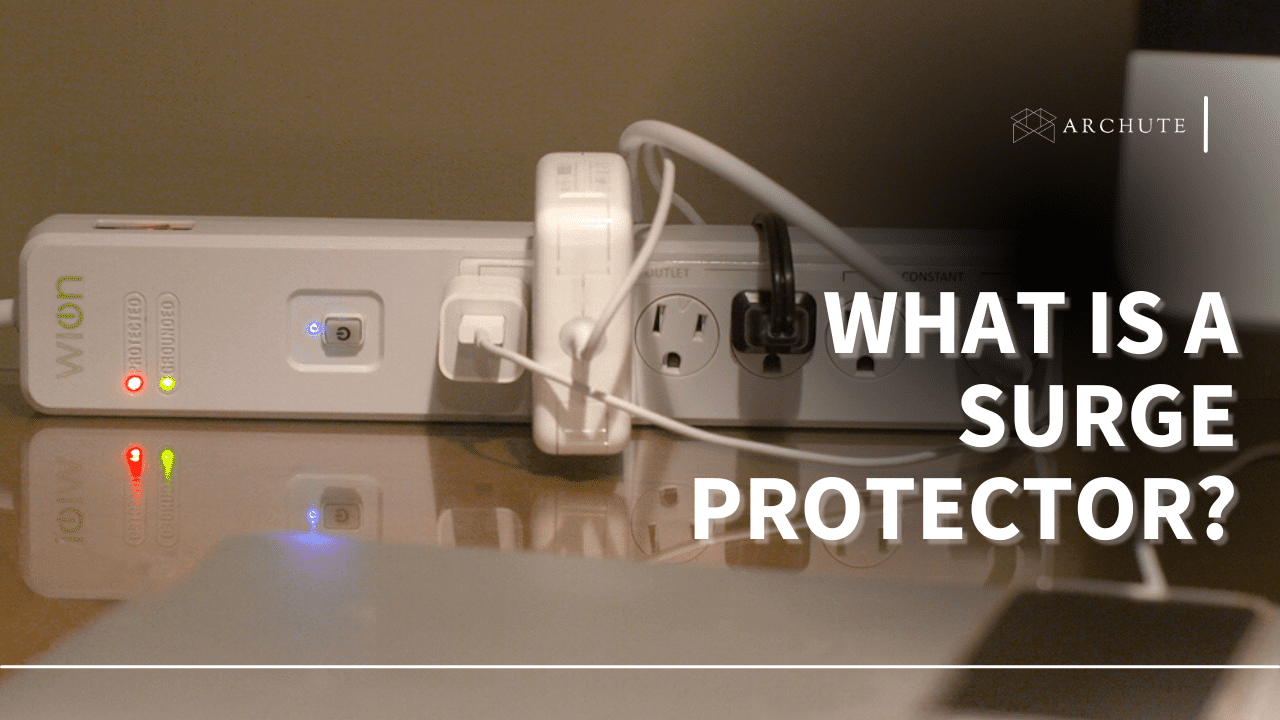 What Is a Surge Protector & Why Do You Need One?

What Is a Surge Protector?

A surge protector (surge suppressor) is a device or appliance designed to shield electrical appliances against voltage spikes in alternating current (AC) circuits. It manages voltage spikes and power irregularities and maintains an even flow of electricity into appliances. Power surges usually happen often and, for the most part, go unnoticed. However, an intense power surge can result in thousands of dollars of damage in seconds.

Joules is the unit of measurement used to measure the surge energy that electrical appliances can absorb. So, knowing a surge protector’s joules rating is important to ensure it’s appropriate for the appliances it’ll secure. The joule rating is usually indicated on the surge protector packaging.

How Do Surge Protectors Work?

A surge protector draws current from one outlet and passes it to the devices connected to the power strip. If the voltage exceeds the acceptable level, the protector will direct the excess power into the outlet’s grounding wire. Grounding wires usually run parallel to the live and neutral wires. They offer a pathway for electrical current if the hot and neutral wires that carry it fail.

Surge suppressors have a MOV, redirecting any excess voltage and ensuring that electronics get consistent power levels. The MOV usually operates like a pressure-sensitive valve. When the MOV detects a rise in voltage levels, it reduces resistance. On the other hand, if voltage levels are too low, resistance increases. So it will automatically activate to divert excess voltage.

Furthermore, the MOV comprises three parts, one of which is a metal oxide, which is connected to the power and grounding lines by two semiconductors. The semiconductors feature variable resistance, which causes electrons to move in such a way that the resistance varies when the voltage is too high or too low.

When Should You Use a Surge Protector?

The appliances you are using will determine whether or not you require a protector. For instance, there is no point in plugging a lamp into a surge suppressor since a power surge going through a lamp will burn out its lightbulb. Conversely, electronics such as laptops and desktops have voltage-sensitive components that power surge can easily damage.

Therefore, without a surge protector, a power surge can reduce the life of your laptop or computer, wipe out all of your data, or even completely damage the system. Therefore, we recommend using a surge protection device with any high-end electronic device, such as gaming consoles and entertainment centers. You will end up extending the device’s life and protecting it from damage.

What Are the Main Types of Surge Protectors?

This type of protector usually protects the entire house from external power surges.

The surge protector is usually cordless. It is plugged into a power line and fits well against the wall. Perfect for small spaces that cannot handle power strips.

This surge suppressor provides a constant battery backup safety net for electrical appliances. This net keeps the appliances working without interruption if there is a power surge.

Factors to Consider When Choosing a Surge Protector

The market has a lot of surge protector options making it a bit overwhelming to choose the right model that meets the demands of modern electronics. However, here are the factors to consider for a decent protector.

Keep in mind that surge protectors also have a short lifespan, though that depends on how hard they work. Besides, the surge suppressor can sustain direct damage when redirecting a power surge.

Surge protectors with a lower clamping voltage will activate much earlier and protect appliances and electronics from a power surge much faster.

Before buying the surge suppressor, consider its cable length. If it cannot reach the wall socket, then it’s ineffective. On the other hand, using an extension cable often voids the warranty and is not recommended. That said, choose a protector with a long power cable since you never know when you’ll need to connect devices to the other side of the socket wall.

Power surges often happen when you switch on your high-powered appliances like your air conditioner or refrigerator. Since they require power to switch on, they can sometimes trigger an electric power surge to get that power supply.

Switching creates transient power demands that upset the current constant voltage flow. The damage generally occurs in the structure’s electrical system and can be instant if not protected or gradual over time.

Power surges can also be caused by a problem with your home’s electrical connection. For example, your utility company may cause a spike accidentally during maintenance and repair operations. Furthermore, there are several possible points where an error might cause an uneven power flow, resulting in a power surge, with the complex power lines providing electricity to your home.

Another rare reason for power surges is lightning strikes. Though it is uncommon, it could be fatal.

What Is the Difference Between Surge Protectors and Power Strips?

Surge protectors and power strips are often mistaken. This is understandable, given how similar they look in many ways; however, a power strip only adds outlets and doesn’t provide any protection.

Tips on How to Care for and Maintain a Surge Protector

Do’s of a Surge Protector

1. Use three-prong or polarized plugs (one blade thicker than the other). According to the Consumer Product Safety Commission (CPSC), this reduces the risk of electric shock.

2. When you first connect a surge protector, ensure the status lights don’t indicate any issues. Most surge suppressors feature a single grounding light that signals whether there is a ground fault. If it indicates the presence of one, contact an electrician as soon as possible to assess whether you have a wiring issue. A ground fault might destroy your electronics, electrocute someone, or cause a fire.

3. Replace surge protectors that do not have an auto-shutoff feature. Otherwise, they will continue to pass power your devices even after their protecting MOVs have worn out.

4. After a major event, such as a lightning strike down the street or several outages in quick succession, always replace your surge suppressors. Besides, check each outlet for burn marks or signs of damage if you’re plugging in a new appliance.

5. We recommend recycling old and damaged surge suppressors when done with them. If not well disposed of, materials inside a surge protector might harm the environment.

Don’ts of a Surge Protector

2. Do not daisy-chain several surge protectors together to increase outlets. Also, never connect a surge protector to an extension cable. Doing this will trip a breaker or blow a fuse, and the worst-case scenario will be that something will start melting, which is the first act of an electrical fire.

3. Do not cover any part of your surge protector with poufs, rugs, or other decorative items. This direct contact keeps heat from escaping and potentially starting a fire.

4. Do not connect a space heater to a surge protector. Space heaters and other equipment with an open heating element (such as hair dryers or toasters) usually use much power, increasing the likelihood of overloading. A surge protector provides even more resistance, allowing heat to accumulate, catch fire, or damage the electronics.

1. Can you plug surge protectors into an extension cord?

You can if the power cable can carry the same amount of electricity as the surge protector, and not more. If the power is more than that of the surge protector, you should not because it’s a fire hazard. Note that although you can use it, it’s against the National Electrical Code (NEC) and the Occupational Safety and Health Administration (OSHA) standards.

2. What is the lifespan of surge protectors?

It depends on the joule rating of the device, the frequency of use, and the intensity of the surges it absorbs. Check the LED indication to ensure your device offers the right protection, or buy a surge protector with an auto-shutoff option.

4. Which electronic devices are at risk of a surge?

Dishwashers, laptops, televisions, and washing machines (even the best portable ones) are some of the vulnerable electronics to power surges. A large power surge can damage any of these devices irreparably. This shows the need for a power surge. A few dollars on a surge protector can save you hundreds of bucks in damage.