Laser projectors are the advancements in entertainment as they have many features to offer. However, they differ from home theatre projectors since they use a different light source to provide a broader range of colors and a sharper image quality. In other words, if you get the best laser projector, you will display superior picture quality compared to a lamp-based projector.

Our article discusses the top picks of laser projectors in the market to help you decide on your taste. But before that, here is a brief description of a laser projector that will help you understand our article better.

What is a Laser Projector?

A laser projector is an electronic device that projects images and videos onto a screen or a surface using laser light. The projection system can use one or more lasers to create an image, which the projector scans across the surface to be projected. If you are looking for a laser projector with superior image quality, then choose Optoma P2. The Optoma P2 matches the Optoma P1's best features but with added technology, making it a better choice for some users. In addition, we were impressed with the P2's image quality; it had a native 4k resolution supported by a dynamic black contrast ratio with over a billion displayable colors. Overall, it was truly cinema quality. We also got expanded smart home support with the Optoma P2. More custom commands, such as Google Assistant and Alexa, gave us control. In addition, it allowed us to manage complex routines and integration with our other devices through IFTTT.

Another advantage of Optoma 2 was that it was more responsive. Its input lag was around 55 ms, which was high for us during gaming, but we didn't experience any delays while on single-player games and casual games.

If you are looking for an all-in-one performance laser projector, we recommend you choose the Samsung LSP7T. It had a 2.2-channel sound system with dual woofers and mid-range drivers, providing a balanced and clear sound across the frequency range. In addition, it used only 30 watts of power to produce enough volume to fill our viewing area. The LSP7T had built-in wireless connectivity and a TIZEN smart TV system. So we could stream popular apps like Prime Video, Apple TV, and Youtube.

It had a powerful processor and vivid picture that produced clear, colorful images on the white surface. We were impressed that it did not need a screen for projection, so whether you hang a bedsheet in your backyard or project it on a wall, it still gave clear images. Since it did not require a screen, we could use it straight out of the box- without adding extra accessories.

We had an easy time setting up the LSP7T. Its throw distance was short even for laser projector standards; thus needed about a foot of distance for a 100" screen, making it versatile for different setups and rooms. Its only downside was it did not have the unshift key or keystone correction options as with other projectors.

If you are looking for a high-quality projector that is budget-friendly, we recommend you choose the Optoma UHZ50. It had a 4K resolution, four times the 1080p resolution. It also had HDR adjustment options that gave us more control over the image quality. Additionally, the laser projector had a 1.3x zoom and a vertical lens shift, allowing us to install it in various locations. Finally, we were impressed with the Optoma UHZ50's image quality as it had Cinematic color technology that gave us an immersive viewing experience.

The projector was easy to install and worked with Google Assistant and Alexa, thus enabling us to control it from a distance. The only downside we experienced was that it was not wireless, which was a non-issue to us as we used an HDMI cable to connect to our devices. 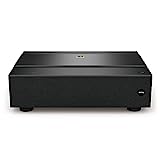 We recommend the BenQ V70500i laser projector to people who want to experience the benefits of 4k resolution without breaking the bank. The projector was easy to set up and use. In addition, it produced excellent image quality. The colors were accurate, and we were impressed by the level of detail. In addition, the 4k projector had an outstanding contrast ratio, making it ideal for watching movies and shows during our movie nights.

We were impressed by how it delivered stunning image quality and supported HDR content. The laser projector was equipped with BenQ's exclusive CinematicColor technology, ensuring accurate color reproduction. In addition, it was a short throw ratio projector making it ideal for our small space.

The projector also supported Amazon Alexa and Google Assistant, thus enabling us to control it from afar. We were also impressed that we could connect to it via Bluetooth or Wi-Fi and stream shows on our gadgets.

The only downside of the BenQ V7050i 4k projector was that it lacked a built-in speaker, but that was not an issue as we purchased the speaker separately. It was easy since we knew how to set up our home theatre system with the projector. The BenQ V7050i laser was a great value and option for us since we were on a budget and wanted a 4k projector. 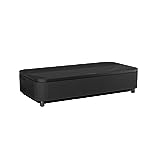 If you want to bring big-screen entertainment with smart streaming to your home or any room, the Epson LS800 is a great choice. It is an ultra-short throw projector that produces a 150-inch image with less than 2 feet of distance.

Its laser phosphor light source is also bright enough to maintain a clear picture in ambient light. We were impressed with this laser projector's versatility, as its low 16.7ms lag made it suitable for gaming. It had built-in Wi-Fi, Bluetooth, and connectivity to dual HDMI ports, thus giving us more access to its content. Additionally, it had an integrated Android TV OS that enabled us to stream directly from platforms such as Hulu and HBO. Finally, its Chromecast feature enabled screen mirroring and Google voice control.

We were impressed with its 3LCD display that produced lifelike hues and a wide color gamut without causing rainbows. It also had a 4k resolution and 10-bit HDR processing that created realistic images with no blur, even during fast-paced sequences.

Factors To Consider When Buying The Best Laser Projector

You must look out for several essential features before buying a laser projector. These features will help you determine whether you are getting a good product. They include:

There is no certain answer when looking for the best laser projector with a good contrast ratio. However, you can choose anything above 1000:1 as it will produce quality images. Still, if you want to get outstanding image quality go for 2000:1. Of course, the ratio you choose depends on your preference and how you intend to use your laser projector. In general, choose a laser projector with a higher contrast ratio than a lower one to take advantage of the best image quality.

Choosing a laser projector with a good color gamut will produce a wide range of colors. In addition, the projector will display more accurate colors giving you the best viewing experience. You can choose to measure a projector's color gamut but the most important aspect to focus on is the standard Rec.709. It is the international standard for HDTV color reproduction and covers the majority of the colors that the human eye can see. Therefore, if the projector meets or exceeds this standard during a test, it can produce excellent color quality.

When choosing a laser projector, you should always consider the brightness levels. A rule of thumb is the laser projector should be at least twice as bright as the ambient light in the room. This ensures you get visible images even in rooms with low ambient light.

While at it, consider that brighter laser projectors are always expensive, so you should budget well before making a purchase.

Light output is among the most important factors when choosing a laser projector. The light output is measured in lux and lumens, bringing us to the question," how much light is enough?"

Most people opt for the bare minimum of 1000 lumens. However, if your project is in a room with ambient light, you should use a laser projector with 2000 lumens or more as a baseline. Lux is a measure of the amount of light that hits the screen. Here are some common lux levels that can help you determine the appropriate lux.

As stated above, an average room ranges from 100 to 10000 lux. Therefore, you will need a laser projector with at least 100 lumens to get a good picture quality. However, if you want the best image quality, go for a 4k laser projector.

These have twice the resolution of 1080p projectors, enabling them to produce sharper and more detailed images. However, they need more light to produce optimal pictures. So, you will look for 4k laser projectors that have 2000 lumens.

Ultimately, choosing the right projector will depend on your preferences but remember to consider the ambient light in your room and the resolution you want before deciding.

When buying a laser projector, you should always consider the throw ratio. The throw ratio is the distance between the projector and the screen divided by the image's width. The three types of throw ratios include; long throw, ultra short throw, and short throw. 1. How do laser projectors work?

The types of laser projectors include DLP( Digital Light Processing) and LCD( Liquid Crystal Display) projectors. The DLP projectors use mirrors to reflect light from the laser onto the screen, while LCD projectors use a liquid crystal to display the image.