Posted at 23:00h in Architecture by Samuel Nguma 0 Comments

Where does one start when looking to put up a cultural building next to Frank Gehry’s Walt Disney Concert Hall in downtown Los Angeles? Like Philanthropists Eli and Edythe Broad of the Broad Art Foundation, one may start off by selecting the right architect for job by organising a closed competition of A-list architectural practices. Diller Scofidio + Renfro had to beat Rem Koolhaas, Herzog & de Meuron, Christian de Portzamparc, SANAA amongst others; to win the commission for a museum that would hold some of the world’s most eminent collections of postwar and contemporary art.

Gehry’s Walt Disney Concert Hall is a quintessential descontructivism icon. It has an opulent, baroque-like and even defiant presence along Grand Avenue. Instead of taking design elements from this ornate palette, DS+R were wise enough to change the whole conversation by presenting a different design vocabulary. For a building that has been teased for looking like a cheese grater, the Broad, despite being modest and introverted, is a marvel in its own right. Compared to its striking neighbour, the museum presents much needed contrasts: orthogonal vs curvilinear, matte vs shiny, singular vs disjointed, spongy vs impervious, modest vs flamboyant.

The complex is home to over 2000 works of art from the Broad Art Foundation. To reconcile the building’s two main functional programs, DS+R devised a ‘veil and vault’ concept to bring together the art collection archive and the exhibition gallery in a symbiotic relationship. Liz Diller, principal of DS+R, is quoted to have said: “At first, we found the brief paradoxical, with its unusually high storage-to-exhibition ratio and its great urban aspirations for a prominent site, paired with an enormous emphasis on warehouse functions. Then we realised we could make the storage a visible asset at the building’s core. It was a very clear diagram.”

The Broad will be porous and absorptive, channelling light into public spaces and galleries. The veil will play a role in the urbanisation of Grand Avenue by activating two-way views that connect the museum and the street – Liz Diller

Ordinarily, the archive and storage programs would have been relegated and placed in the basement or the topmost part of the building – away from prying eyes. Here, however, the ‘vault’ which houses the archival spaces, is an integral part of moulding the visitor experience throughout: from once they set foot into the building until they exit. The ‘vault’ is raw, heavy and opaque. Since it’s placed midway in the building’s section, it’s underside morphs the entrance lobby with an organic cave-like ambience; while its top surface is the floor of the exhibition floor itself.

The ‘veil’ is the ‘vault’s’ antithesis. Its airy and cellular exoskeleton structure envelopes the vault on all sides and provides filtered natural illumination for the exhibition gallery. It is this veil, that is lifted at the corners to offer entrance opportunities into the Broad Museum. Once inside, visitors appreciate the underbelly of the vault that creates a dark and ethereal spatial atmosphere within the lobby. They are then led up from the lobby using an escalator that tunnels itself through the ‘vault’ onto an acre of flexible double-volume exhibition space that is gloriously lit naturally. From the gallery, one goes down a winding flight of stair that offers glimpses into the belly of the vault; in a way showcasing the vast art collections at the Broad.

2500 rhomboidal modules of fibreglass reinforced concrete were used to create the skin of the building. This honeycomb-like exoskeleton is suspended on a steel frame and is the brise-soleil of the Broad Museum. Along the exterior elevation, the skin curves inwards in a concave fashion to offer reprieve to the visual monotony. This wormhole dramatically pierces the auditorium that is located within the ‘vault’ and in turn offers an interesting fenestration surface.

Inside the gallery, the ‘veil’ toys with the visitor’s perception; creating a warped illusion that the surrounding surfaces are more complex than they really are. As one moves, so does the play of light and shadow shift – resulting in an ever-shifting dynamic that encourages movement. Considering how sensitive an issue lighting is in exhibition architecture, it is remarkable how well lit the gallery is. The 3 700 sqm of gallery floor area is almost matched in area to the suspended ceiling glazing that floods the interior with filtered light.

With a view of being eco-friendly, the Broad was designed with the hopes of attaining LEED Silver Certification. The complex offers charging stations for electric cars; parking slots for bicycles; rainwater harvesting for landscaping purposes; high efficiency plumbing fixtures that curtail water consumption by around 40%; and its easy pedestrian accessibility due to its proximity to the public transit metro. In design of the Broad Museum, Diller Scofidio + Renfro have made a commendable attempt to create an architecture that has a resolute charisma that can stand unabashedly against the lyrical Walt Disney Concert Hall. 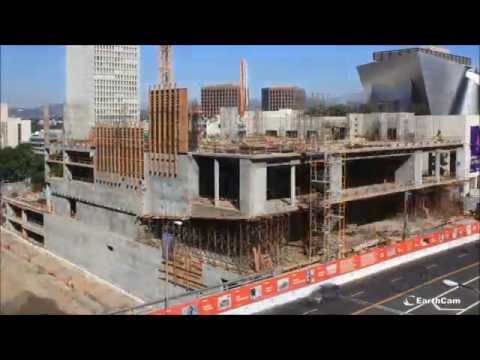