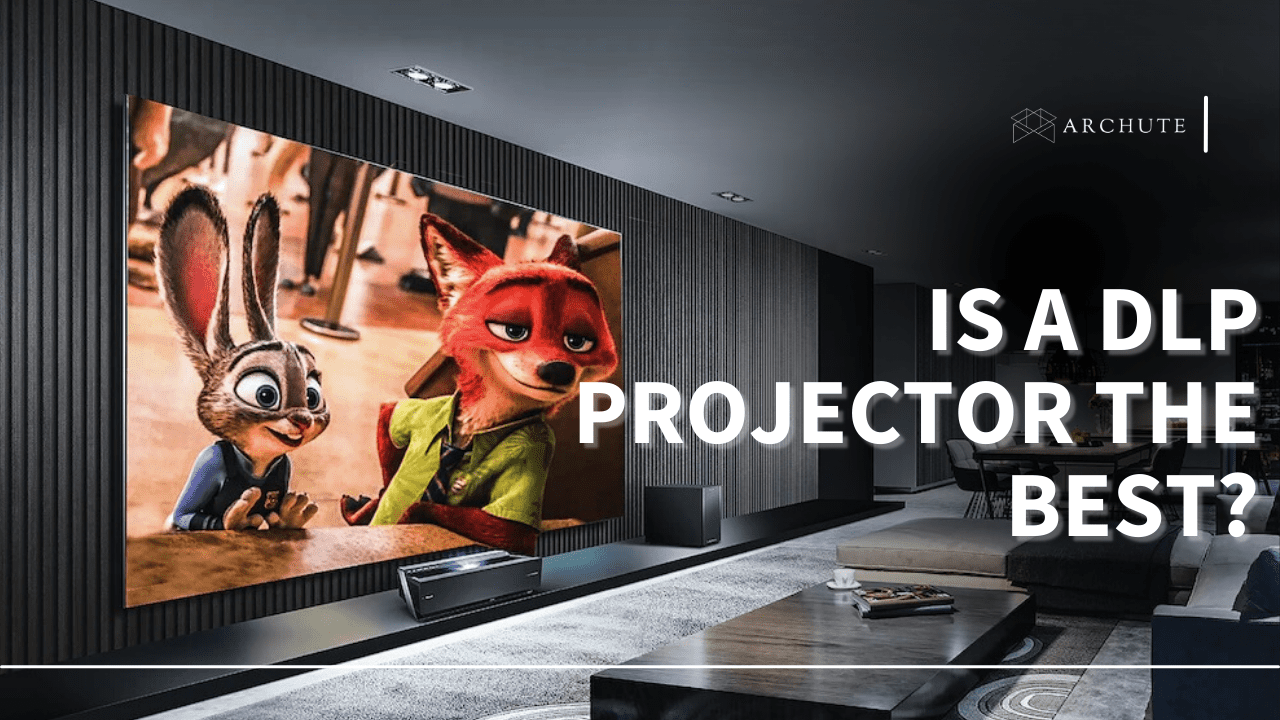 by Ian Mutuli
Updated on 1 December 2022

Projectors are popular right now since everyone seems to be purchasing one, whether the projector is for a home theater system, workplace, classroom, or even their upcoming camping trip. In short, people are purchasing mini and portable projectors to carry the excitement of watching on a huge screen.

When shopping for the best projector for you, you might have come across the debate on which one is better, DLP and LED projectors. So, if you are wondering which one is the best for you, we have explained the differences.

What is a DLP Projector?

DLP projector is a video display using a digital micro device that reflects light towards the screen. DLP is also known as Digital Light Processing and is the name of Texas Instruments’ original patent.

It has a DLP chip known as a Digital Micromirror Device or DMD, which has millions of micro mirrors where the mirrors can be adjusted independently, meaning they can move on their own. Each mirror in your DLP projector’s DMD Chip represents one pixel in the digital image. So moving closer to the light source forms a darker pixel, while moving away creates a lighter pixel.

The DLP projectors also have a spinning color wheel in combination with three arrays of red, green, and blue light-emitting diodes (LEDs), which provide color and project it on the screen.

How Do DLP Projectors Work?

Inside the (DLP) Digital Light Processing Projector, you will find a chip with tiny mirrors, and each mirror will stand for a separate fraction of the projected image. The mirrors are angled in one direction or another to give your image exceptional brightness and contrast.

DLP technology makes a single blue laser diode the sole light source. A complex optical system with rotating elements is used to divide a single laser beam into the colors red, green, and blue. The DLP matrix is where this beam collides through the lens and onto the image projection screen; this matrix transmits the image.

What are the Types of DLP Projectors?

There are two types of DLP projectors, based on the number of DLP DMD chips it contains. They include:

Single-chip DLP projectors are the most common types of home theater projectors, and they produce sharp images. However, this type depends on the color wheel to get its color.

A Single-chip DLP projector either uses a color wheel to separate the white light from the primary projector bulb into its component Red, Green, and Blue (RGB) colors or use a colored LED or laser as the light source.

On the other hand, three-chip DLP projectors are costly and are mainly used in digital movie theaters. These three-chip systems have RGB (Red, Green, and Blue) DLP chips responsible for maintaining color accuracy without rainbow artifacts.

The DLP 3-chip projector is suitable for high-brightness applications and high performance in large rooms like digital cinemas, large audience venues, and lecture halls. In addition, these 3-chip systems are perfect for producing stunning images.

What is an LED Projector?

An LED projector is a DLP device backlit by LEDs. Also, too often refers to the light source for the projector, so you need to check your projector for the type of technology. For technology, LED projectors can use the ones of both DLP and LCD projectors, which means they can have man qualities of either DLP or an LCD projector, depending on your choice.

Advantages of DLP over LCD Projectors

DLP projectors have many advantages over LCD (liquid crystal display) projectors, including:

Although there is no difference if your DLP projector uses an LED lamp, there are DLP projectors that don’t use LED lamps.

LED projector is a mixed projector technology that uses DLP or LCD technology which uses an LED light source to produce the images.

DLP projectors use a laser light-emitting diode. However, they are not referred to as laser projectors due to the nature of the technology and marketing reasons.

How Does a DLP Projector Compare to a LED Projector?

DLP projectors are usually more expensive than LED projectors, but their price is okay with their advantages. While the cost of an LED projector can range from extremely inexpensive to very expensive, they are excellent at reducing maintenance costs because the light source is designed to last the full lifespan of the projector without ever needing to be replaced.

The projector’s brightness, otherwise known as the lumen ratings, is the main determinant of the light output of a projector. The light output is different with different models and projector types, but generally, the DLP technology has the best light output.

Notably, the modern versions of other projectors integrate features that improve light output. However, if you shop for home theater projectors with minimum ambient light, you will not need a projector with so much brightness.

Observe how the sun’s effect on a flashlight compares to the impact of ambient light. You can’t see the difference between the two lights if the sun is very bright. You should consider a laser projector if you require the highest light output.

The contrast ratio is the difference between two extreme pixels meaning the dark and white pixels.

As its name suggests, the rainbow effect enables a projector-generated image to emit a blended spectrum of multicolored light. This technology uses the color wheel and can be achieved with a range of single chips.

It occurs because the DLP projectors use different chips, which show different colors, and the projector will show all the colors before it moves to the next one. So you can see the rainbow effect when you move the eye quickly across light areas of the projected image or video scene, and you will see a fringe that looks like a rainbow.

LED projectors have lower maintenance costs and frequency than DLP projectors since you will only need to replace the projector lamp after 2,000-5,000 hours. However, DLP projectors are easy to maintain since they are filter-free and have a sealed chip design so that no dust can get in, and the maintenance is less.

An LED projector will last 20,000 hours, while a traditional lamp model will give a maximum of 5,000 hours. However, after 2,000-5,000 hours, you will need to buy a projector lamp replacement and replace it.

LED projectors use LED lamps, while DLP projectors work using an LED or a standard lamp.

Color is an important part of the display, influencing how attractive a projector’s output will be. At close ranges, color breaking can occur in projectors with a spinning color wheel.

Although it might not be popular among the best long-throw projectors, DLP projectors frequently include this feature because the wheel needs to adjust itself multiple times in a minute to produce each color image.

However, color breaking does not affect LED projectors that use LCD technology or other projection methods without a color wheel. These projectors use variously colored LED bulbs to produce the colors. Therefore, brands reduced the color-breaking tendency by doing away with the color wheel.

Although LED and DLP projectors work within the same color space, their color accuracy is quite different. The fact that LED bulbs are available in various hues, as opposed to traditional lamps, which employ white light with a color filter, contributes to this characteristic.

As a result, LED devices, especially the newer models, use 4LED to offer improved color accuracy and black levels. In addition, the devices are meant to create consistency around the projector’s lifetime.

Is a DLP Projector the Best?

It depends on your needs. DLP projectors are the best for you if you are looking for an affordable option and are mostly concerned about eye fatigue. However, an LED projector will be the best if you need a small and lightweight projector.

In addition, DLP projectors have a higher light output with at least 2,000 ANSI lumens than LED projectors with an output of up to 2,000 ANSI light lumens. They also don’t need filters and include a better response time with 3D capabilities.

Frequently Asked Questions on Is a DLP Projector the Best?

1. Do DLP Projectors Get Hot?

Yes. About 98% of the projectors on the market are powered by traditional lamps and bulbs, which can easily get to 200 or 300 degrees while using.

2. Which is Better Between, DLP and LCD Projectors?

DLP and LCD projectors are different, and you can know which is better depending on what you are looking for. Let’s see the differences: