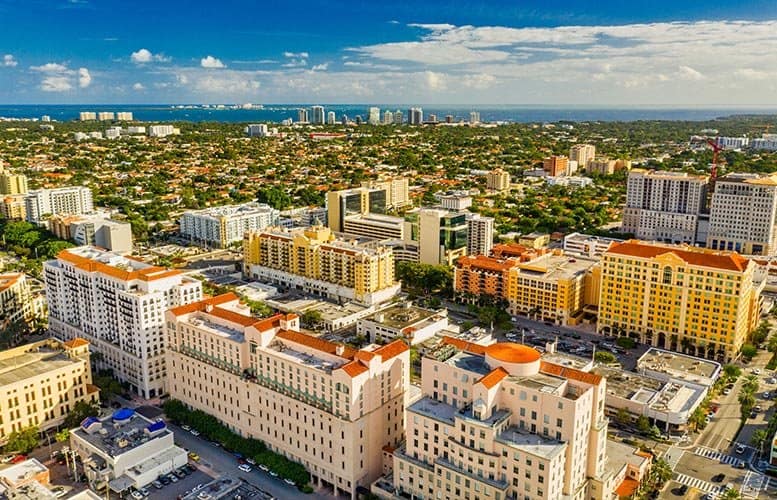 Posted at 18:37h in General by Ian Mutuli 0 Comments

While Art Deco buildings dominate public perceptions of Miami’s architecture, there’s so much more to Miami than the pastel-hued gems from the early 20th century. Miami is filled with beautiful buildings in a range of architectural styles, including at least one style that exists only here. Let’s dive into some of the most popular architectural styles in Miami: 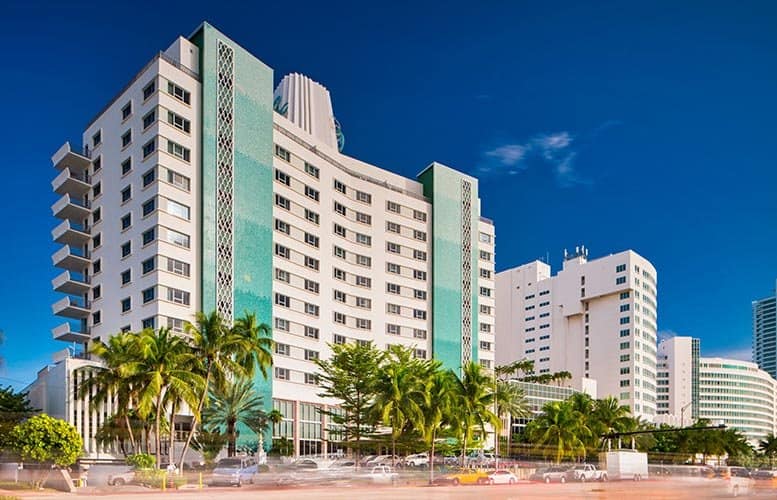 The architectural style of many of Miami’s most beloved and iconic buildings, Miami Modern, or MiMo for short, is a movement that has been recognized throughout the world for its historical significance.

Miami Modern architecture was developed in South Florida during the post-war period, as an internationally recognized response to the Bauhaus movement, which promoted a “less is more” aesthetic through its architectural design. In the years following the end of World War II, South Florida was booming. The hospitality, construction, and real estate sectors, in particular, were all benefitting from rapid population growth and newfound optimism.

Within a few short years, Miami was propelled from being a sleepy resort town to an exciting and glamorous metropolis, replete with lavish waterfront hotels and new, modern single-family homes. Miami Modern architecture was born from a combination of a new generation of young architects, all of whom were keen to break from the past and create something new, and a constant need for the latest outstanding hotel.

Emerging talents such as Morris Lapidus, Norman Giller, and Robert M. Nordin were given the task of designing buildings that would exemplify glamor, fun, and excess; all themes which had come to define the popular image of Miami experience. A sense of community quickly developed in architectural circles, with designers collaborating on ideas and challenging each other to try new things.

This exciting atmosphere was responsible for the wide range of features that define Miami Modern buildings. Embellishments such as curved surfaces, bright colors, walls with circular, rectangular, and lace pattern cutouts, and boomerang angles are all signature elements of MiMo buildings. Architects also employed a range of extravagant features like pylons, marine imagery, and swooping curves. Some of the most impressive examples of the style promote more natural imagery such as patterned stucco and exposed brick, and ornamental ironwork and decorative railings often finish things off perfectly. 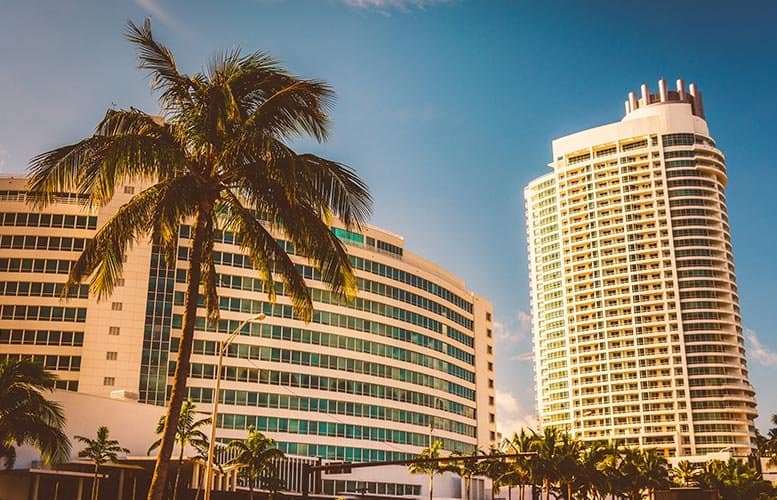 Morris Lapidus is, perhaps, the most celebrated architect associated with the Miami Modern movement. His self-confessed career highlight is the ubiquitous 1954 Fontainebleau Hotel, which has long been a revered symbol of style and sophistication. In 1963, Lapidus designed the incredible Temple Menorah, a North Beach landmark that employs his trademark ‘cheesehole’ cutouts on all sides.

Also in North Beach, the 1952 Bayside Condos building is a wonderful MiMo treasure. Designed by B. Robert Swartburg, the building’s dramatic entrance of intersecting planes and angled poles looks retro today, but at the time it seemed incredibly futuristic. Another iconic building that created an exciting sense of freedom and fun is the Waterside Hotel. Designed in 1957 by Robert M. Nordin, this colorful hotel features a chalet-style roof which creates a grand entrance to the inner courtyard pool and surrounding catwalk. 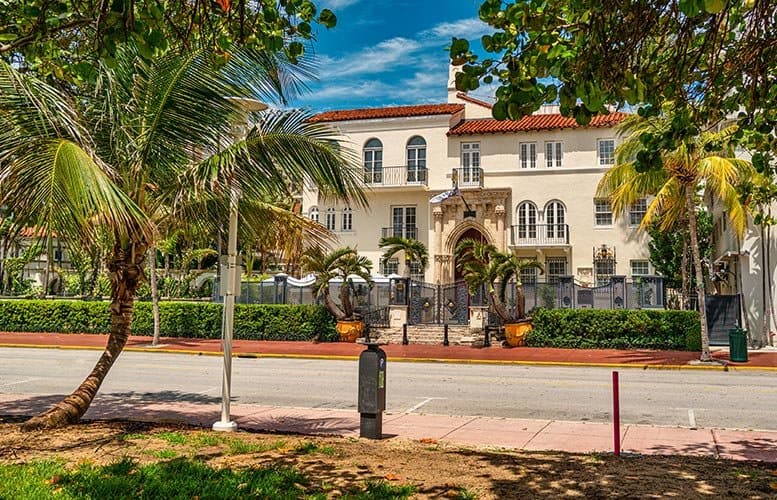 The Mediterranean style of architecture defined Miami during the boom-times of the 1920s, and gorgeous, historic buildings of this style can be found throughout the city.

Classic Mediterranean Revival architecture was employed to evoke the grandeur of the old world, and the most archetypal examples of the style have a whimsical feel, combining elements of various Mediterranean styles including Spanish Renaissance, Italian Renaissance, and French Colonial. The resulting “fantasy architecture” began to gain a foothold in South Florida during the late 19th century, although the majority of classic Mediterranean Revival-style buildings in Miami were built during the 1920s.

Drawing heavily on the styles of European palaces and seaside villas, the Mediterranean Revival architectural style was most commonly applied to hotels, apartment buildings, and opulent residences. Notable architects who designed Miami buildings in this style include F. Burrall Hoffman, Henry Maloney, Maurice Fatio, and the Shultze and Weaver firm. Mediterranean Revival is still extremely popular in Miami, with homes and commercial buildings continuing to be designed and built in the style.

Some of the best examples of the style feature Spanish Baroque decoration around openings and balconies, parapets, arches, and twisted columns. Mediterranean Revival buildings also usually feature patios, courtyard, loggias, and ornately designed landscaping surrounding the property. Examples of Mediterranean Revival architecture can be found in every corner of Miami, including Little Havana, Buena Vista, and Morningside.

There’s a celebrated collection of buildings in Coral Gables, which was designed as the first planned community in the area. South Beach is home to Española Way, a Mediterranean Revival street that transforms a portion of South Beach into an atmospheric European-style village. Elsewhere, the ultra-luxury Fisher Island is home to a collection of more modern Mediterranean Revival style villas and condos, all of which draw inspiration from the island’s original 1930s Vanderbilt Estate.

Villa Vizcaya is one of the most beloved Mediterranean Revival structures in Miami. Overlooking Biscayne Bay in Coconut Grove, this iconic structure was designed by F. Burrall Hoffman and built in 1914. Now a popular museum, the gorgeous and impressive villa imitates classic Tuscan design. Located in nearby Coral Gables, the Biltmore Hotel is another important local landmark. Designed by Shultze and Weaver and built in 1926, the hotel’s extraordinary tower was inspired by the Giralda tower in Seville. Measuring 315 feet, the Biltmore was, for two years, the tallest building in Florida.

The exclusive and private Fisher Island is home to the Vanderbilt Mansion, a fabulous building that was designed by Maurice Fatio in the 1930s. The mansion - now a private club and hotel - has been restored to its former glory, and still features an octagonal entryway and antique oak- and mahogany-paneled walls in the original dining room. 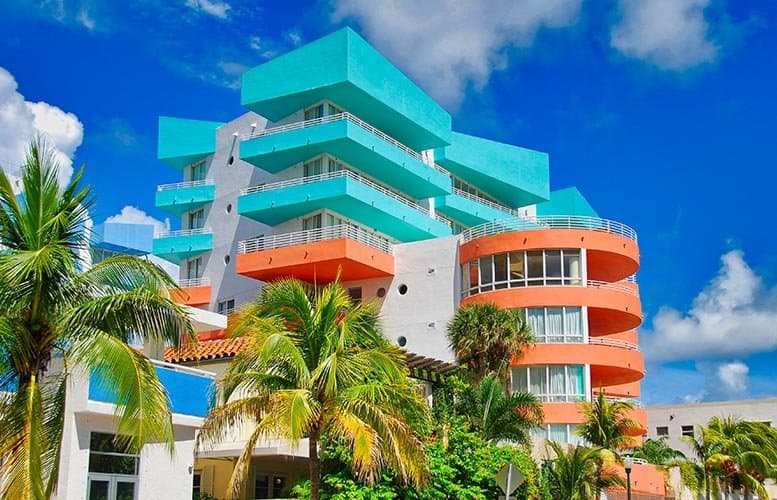 Easily the most well-known and iconic of Miami’s architectural styles, Art Deco is a style of visual arts, architecture, and design that first appeared in France before World War I.

Art Deco quickly began to influence the design of buildings, furniture, fashion, cars, and everyday objects. Encompassing modern styles, fine craftsmanship, and employing rich materials, Art Deco represented luxury, glamor, exuberance, and social and technological progress. Art Deco spread throughout the world during its heyday in the 1920s and 1930s and was particularly popular as an architectural style in booming Miami.

Equally historic, retro, and brilliant, Art Deco architecture in Miami is marked by its use of bright colors in pastel shades, ranging from baby blue to orange, unusual and glamorous materials, and whimsical design features and exotic motifs. Geometric shapes and a hodge-podge of different design types, including Cubism and Fauvism, are also hallmarks of Art Deco architecture in Miami, as well as chrome accents, geometric fountains, and statues.

The principal architects of the Art Deco period in Miami were Henry Hohauser and L. Murray Dixon, both of whom hailed from New York. Their specialty came to be known as Tropical Deco, a sub-style that reflected regional influences like palm trees, cruise ships, and the ocean. Although the Art Deco style’s dominance began to wane with the onset of World War II, when more functional and unadorned styles took over, hundreds of Art Deco examples remain in Miami, standing as a testament to a brief and exciting period of architectural flamboyance. 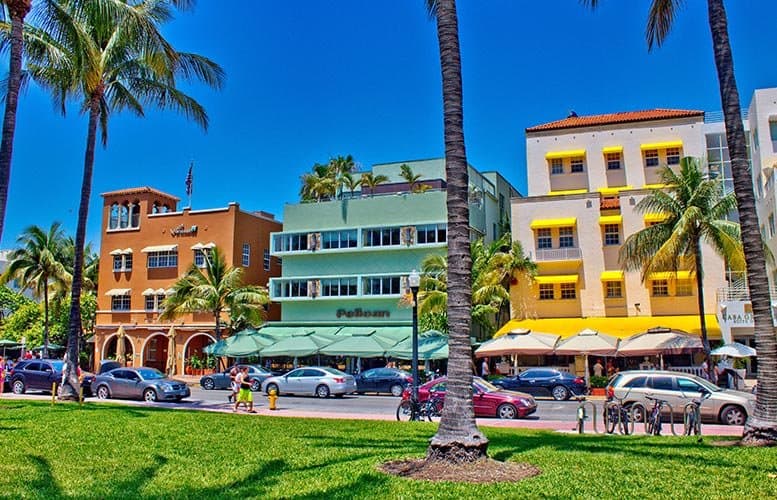 As incredible as it might seem today, by the mid-1970s, many of Miami’s Art Deco treasures were in danger of being destroyed to make way for modern development. The Miami Design Preservation League was formed in 1976 with a mission to protect the buildings, which eventually led to the recognition of the Art Deco Historic District in Miami Beach.

Although Art Deco architecture can be found throughout the city, Miami Beach is home to the highest concentration of Art Deco architecture in the world The Historic District - with over 800 buildings and structures built between 1923 and 1943 - was the first 20th-century neighborhood to be recognized by the National Register of Historic Places.

Miami’s Art Deco architecture has been celebrated in popular culture for years, and visiting the Art Deco Historic District - located between 5th Street and 23rd Street - can feel like stepping onto a movie set. The Park Central Hotel, located at 630 Ocean Drive, features bold vertical bands and window “eyebrows.” Located in what was a crime-ridden area during the 1980s, this hotel has featured in episodes of Miami Vice as well as the movie Scarface. Another iconic hotel to feature in the aforementioned Al Pacino classic, The Carlyle is unchanged since its opening in 1941 and features vertical piers, horizontal lines, and classic curvy corners.

Designed by Howard Lovewell Cheney in 1937, the fantastic Miami Beach Post Office is an example of “Deco Federal.” While the exterior is on the minimalist side, the interior is classic Art Deco, featuring an extravagant cowboys-and-Indians frieze, a starburst ceiling, and shiny brass accents. Perhaps most encapsulating Miami Beach’s Art Deco style, The Breakwater will be familiar to most people. There’s an emphasis on symmetry here, and the central tower and splashes of neon are just perfect. 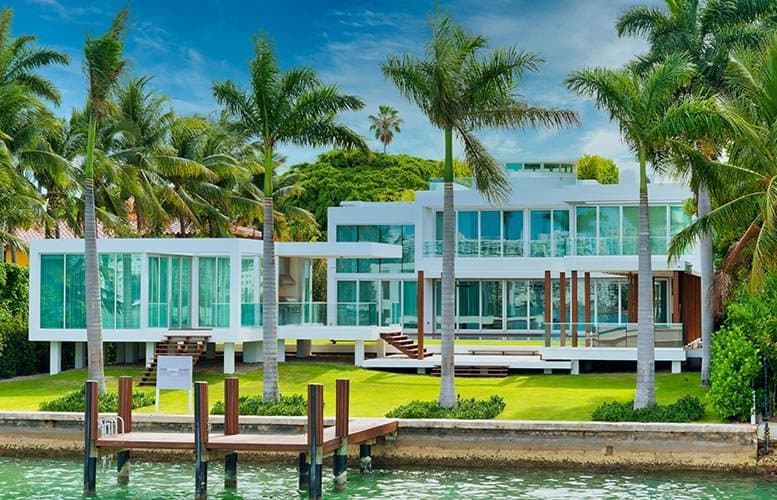 The infamous Miami Vice era during the 1980s shone a light on a new style that has since been recognized as the Miami Beach School of Architecture. Much of the construction that was completed during the 1980s and 1990s was located downtown and has become an iconic part of Miami’s architectural landscape.

A major player in the contemporary architecture scene in Miami has been the landscape architecture firm Arquitectonica. Many of the buildings that now define central Miami, including the American Airlines Arena were designed by this mighty firm. Other designers quickly followed suit, with much of the design choices taking inspiration from the surrounding environment. A prime example is the Cesar Pelli-designed Adrienne Arsht Center for the Performing Arts, which features a cruise ship-inspired shape.

More recently, Miami has become a stomping ground for renowned “starchitects,” including Iraqi-born Zaha Hadid, Danish architect Bjarke Ingels of Bjarke Ingels Group, and Lord Norman Foster of Foster + Partners, based in Manchester, England. Contemporary architecture can be found throughout Miami, most notably in neighborhoods such as Brickell, Downtown, and Mid-Beach, where the stunning Faena District has transformed the neighborhood. 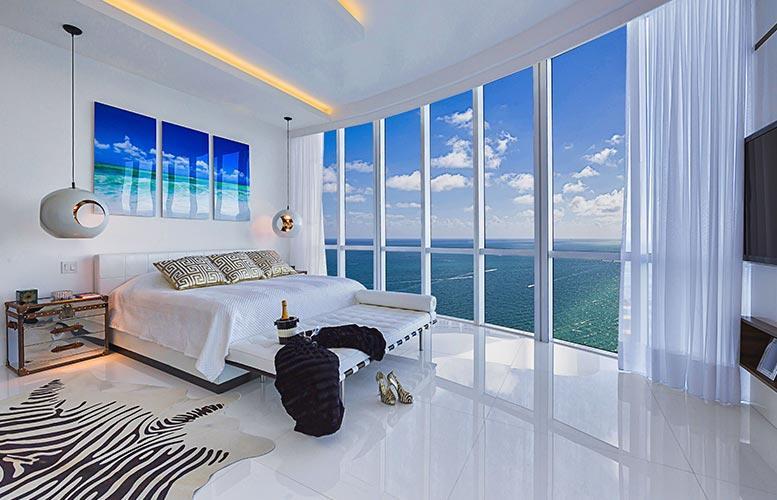 Completed in 2008, Arquitectonica-designed 500 Brickell stands as a testament to how exciting Contemporary Miami architecture can be. These two apartment buildings in the Brickell neighborhood feature a Pop Art-style bridge with an o-shaped hole, rectangular-slatted balconies, and an eye-catching grid of red and white bubble windows.

Another Arquitectonica creation is the Miami Children’s Museum, which continues the theme of colorful whimsy. Completed in 2003, this striking building features waves and cones, as well as colors to represent the four elements.

Located on Biscayne Boulevard, One Thousand Museum Condos is a 60-story residential tower designed by Zaha Hadid. Featuring a stunning and gracious design, this luxury tower appears as a continuous piece of contemporary sculpture, with fluid curves and a striking modern exoskeleton.

Designed by Bjarke Ingels, The Grove at Grand Bay in Coconut Grove is another stunning example of Miami Contemporary style. Featuring floor plates that rotate every three feet from the 3rd to 17th floors, the pair of gracefully twisting towers appear to be turning in slow motion.