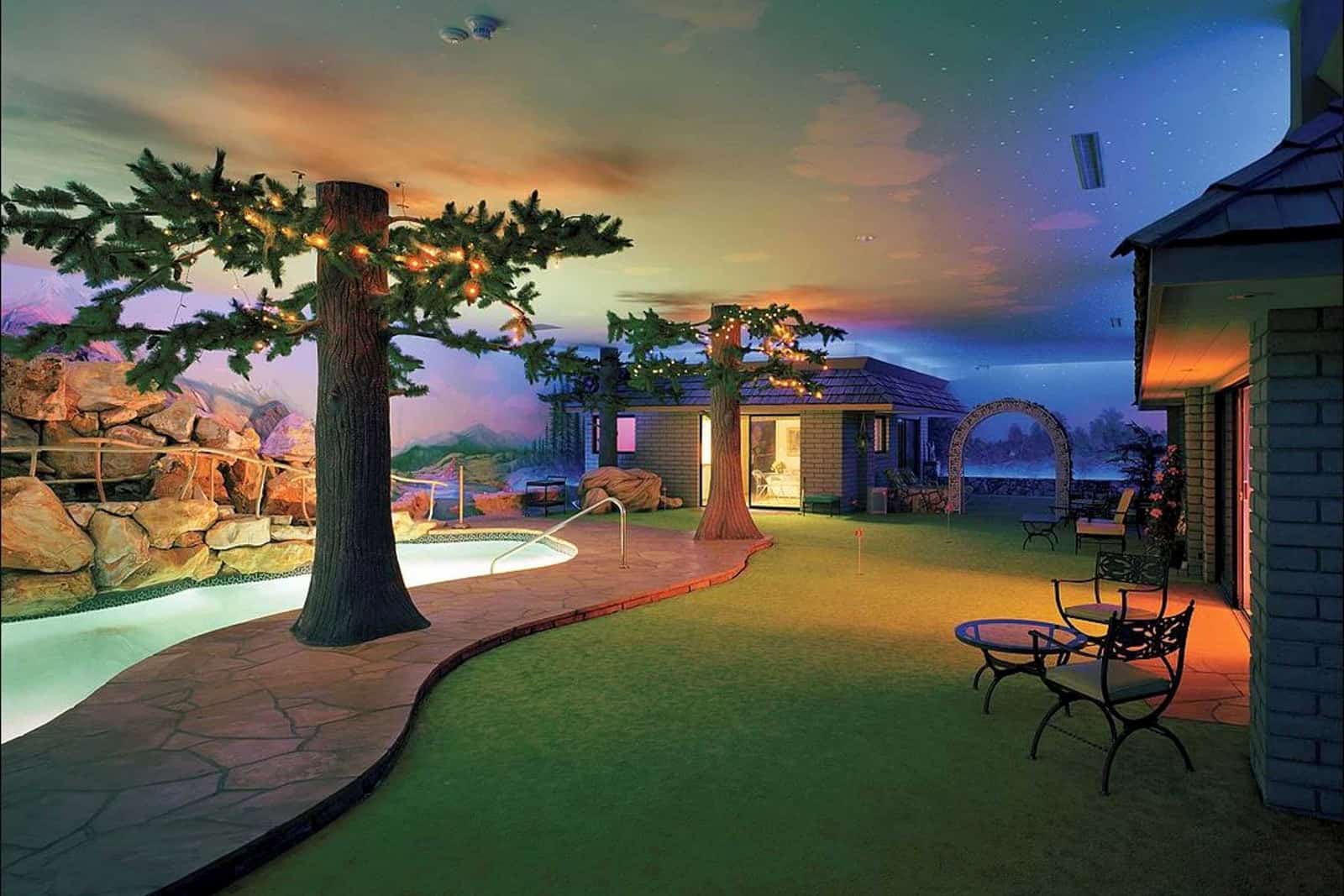 15 Luxurious Underground Bunkers Around the World

Posted at 16:34h in Knowledge by Jacky Chou 0 Comments

The need for luxurious underground bunkers has grown quickly in recent years, especially during the pandemic and increased global tensions.

To ensure protection should catastrophe strike, most people are investing in bunkers where they can wait out the worst in style.

The amazing bit is that you can easily find an underground banker packed with everything from golf courses to swimming pools, movie theatres and bowling alleys.

Here is a guide to the most luxurious underground bunkers around the world.

What are the benefits of a Bunker?

Ideally, a good underground bunker should provide you with a good rest and escape space.

Additionally, a fallout shelter or bomb shelter will protect you from nuclear war or pandemics.

Underground bunkers are cost-effective since they rely heavily on natural warmth to keep you warm. Therefore it is possible to save up to 70 percent of the cooling and heating expenditure.

Let's get started and look at the 15 most Luxurious Underground Bunkers Around The World with that understanding.

Vivos Europe One is one of the most luxurious fallout bunkers founded by Robert Vicino. The underground bunker costs around $1 billion and is built for millionaires in the event of an apocalypse. The Vivos Europa One is well built, and it can withstand chemical attacks, earthquakes, nuclear war, tsunamis, and other natural or artificial disasters. 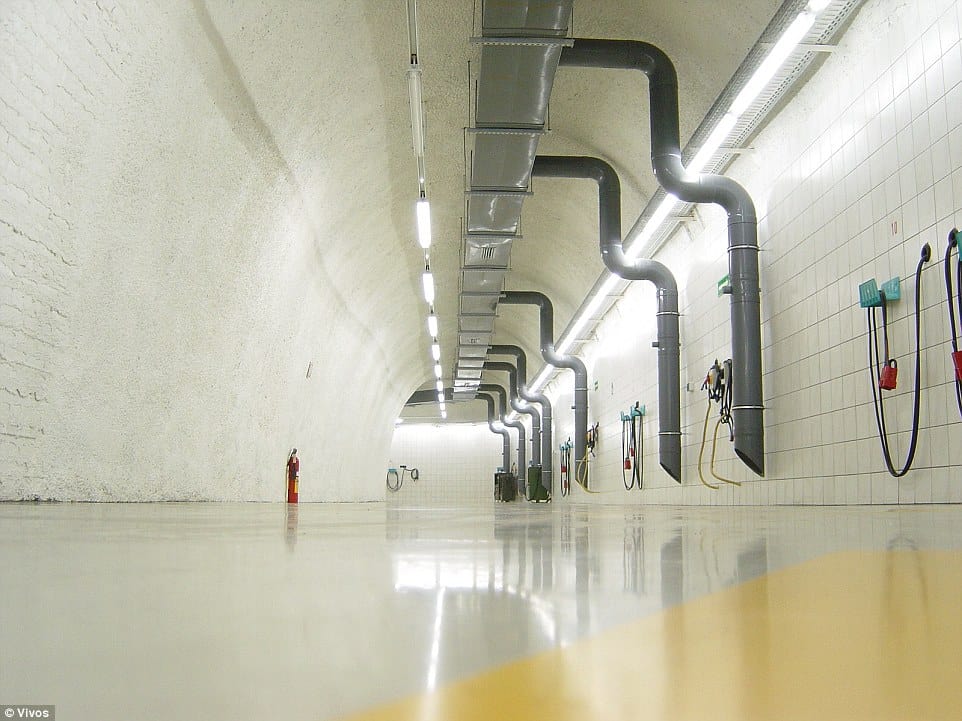 The concrete bunker is located in Rothenstein, Germany, and boasts lavish amenities like gyms, swimming pools, theaters, restaurants, outdoor service, customized apartment units, and even a helicopter service. The amazing part is that the apartment units are Custom Built for Any Size Group. It also has roads, railways, tunnels, a top-grade security system, a self-contained water system, blast-proof doors, and generators.

The Survival Condo was the former network and data center developed and transformed into a doomsday bunker by Larry Hall. This luxury apartment underground is perfect and will serve as a shelter for people looking to survive an apocalypse. This underground space costs around $20 million to build, and it can house several families simultaneously. 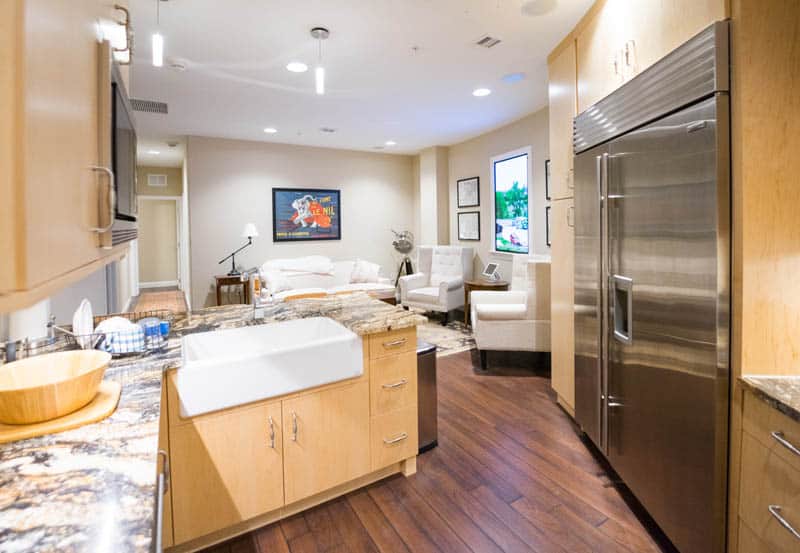 The good bit is that the bomb shelters can survive for a couple of years since it features food stores, garden planters with grow lamps, and fish tanks. Apart from providing a safe home, the Survival Condo Project also offers a five-year food supply per person. The Survival Condo Project comes with 15 floors divided into 12 family homes, including the main house and space for operations. Each unit or apartment has three bedrooms, a kitchen, a dining room, two bathrooms, and a wash and dry area. 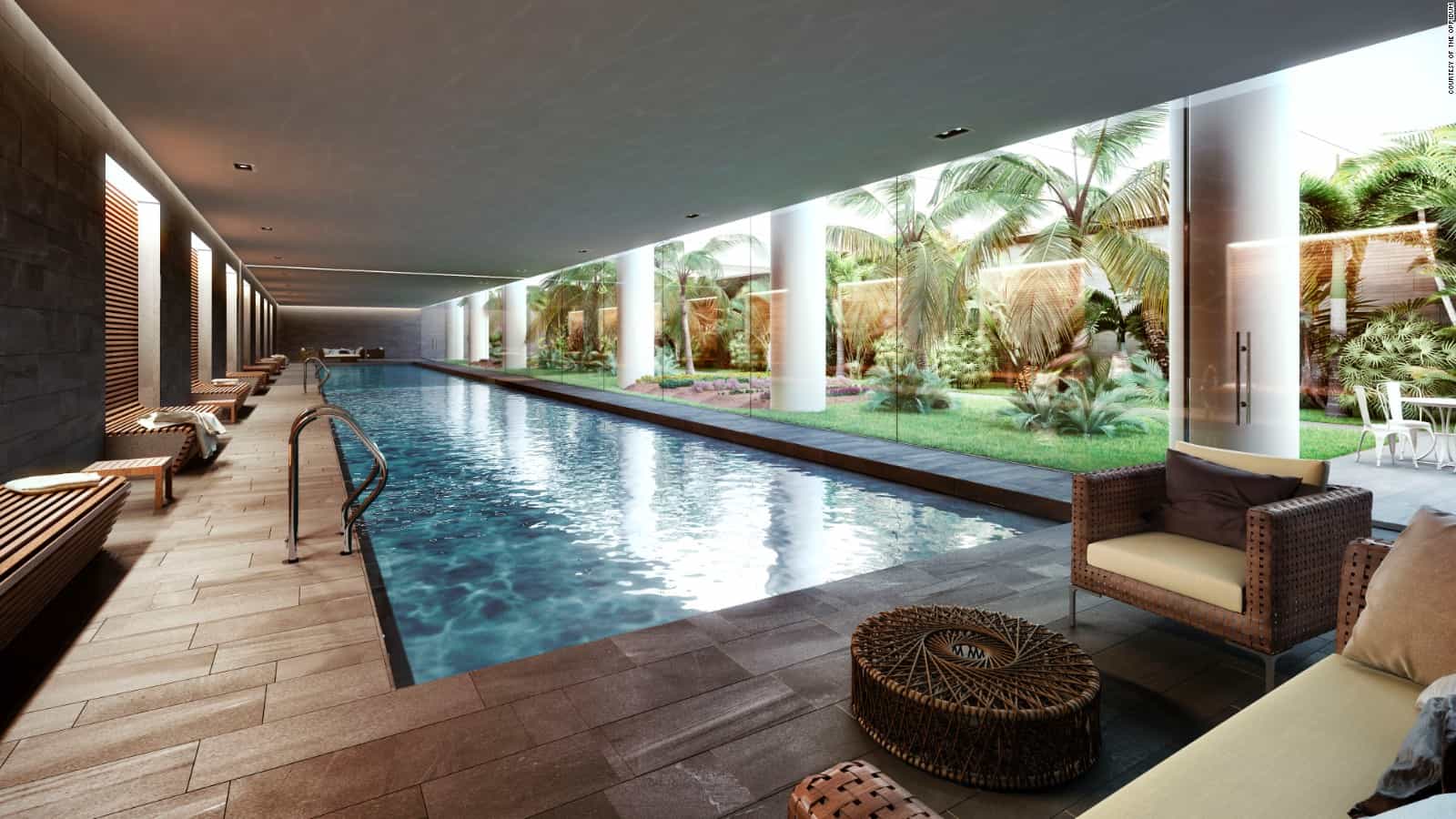 The Oppidum bomb shelter compound has around 77,500 square feet, and the room has a 13-foot high ceiling. These underground bunkers' main features include a high-end spa, swimming pool, library, cinema, and other interesting leisure facilities. Apart from that, its defense against nuclear weapons or a strong earthquake is pretty good, and its location recreates a huge role in its security.

Atlas Survival Shelters is one of the most affordable places to hide during the world's end. With around $50,000, you can purchase an underground bunker that will protect you in the event of a nuclear attack, civil war, or even zombie apocalypse. The storm shelters are 20 feet below the ground, and it provides a comfortable deluxe shelter with complete amenities like kitchen, dining area, restroom, storage rooms, ans sleeping quarters. Additionallty, these bunkers also have solar panels and other exterior pieces concealed so that no one can find your fallout shelter.

The luxury underground bunkers are located in Tifton, Georgia. It is a two-story house with 12 bedrooms, and it serves as the greatest escape house from the worries of life. This bomb shelter has around $17.5 million, and it promises safety and high-quality entertainment during an apocalypse. 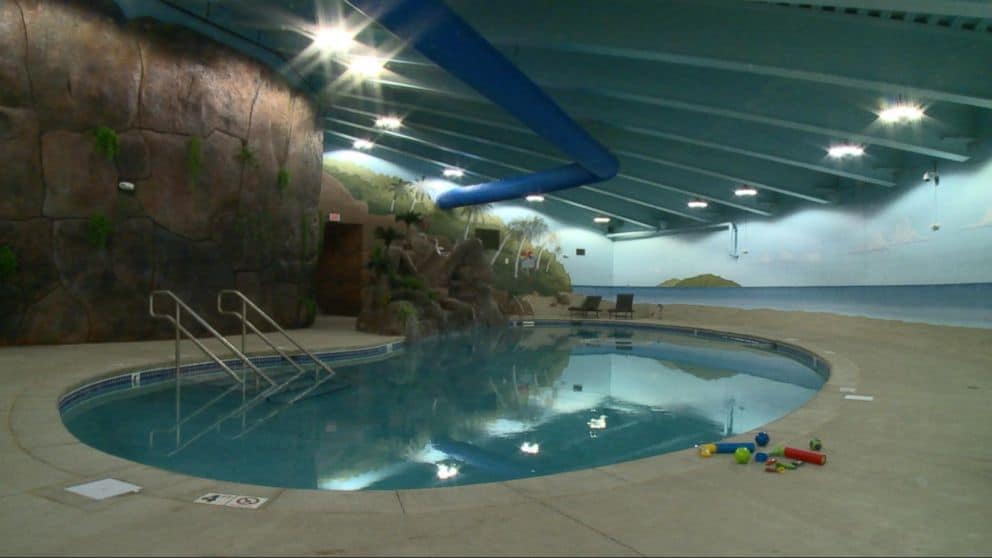 The luxurious underground bomb shelters have amazing features, including a conference room, computer room, commercial kitchen, theater, recreation room, library, and workshop room. In addition, the storm shelter helps you remain connected to the internet through a 2 DSL technology.

The fortress guarantees safety against chemical attacks, nuclear explosions, asteroids, and zombie outbreaks. It has a 3-foot elevated concrete wall that can resist a 20-kiloton nuclear blast. Moreover, the storm shelter is fitted with decontamination showers and private water systems, and it has a solar power backup.

The Survival Condo is located in Kansas, and it was built from the remains of a missile silo from the US government during the Cold war span. This bolt-shaped underground shelter has fifteen floors that accommodate various amenities. It will protect against any nuclear explosion, tornados, fires, heat waves and floods. 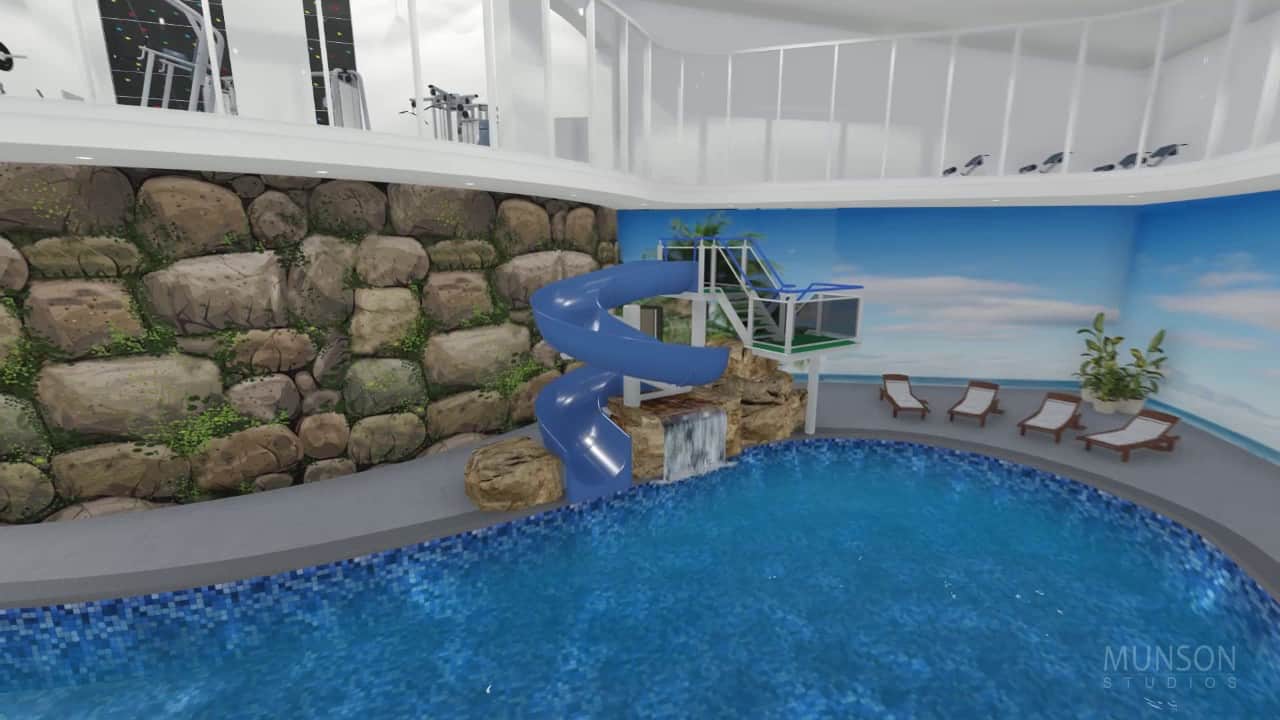 These bomb shelters are 210 feet deep and has luxuries like an indoor dog walk, a rock climbing wall, a shooting range, a water park, an indoor pool, a library, a bar, a theatre, and a command center to help keep the people inside active.

The amazing part is that the power backups and fresh-water storage in the underground space
can sustain for over five years. Additionally, Organic plants are grown under artificial light inside the bunker to keep the people using this facility healthy physically and psychologically.

The Silo Home is another ideal bunker you could go for. It is located in Saranac, New York, up in the Adirondack Mountains, making it an incredible underground shelter to help keep you alive any time there is a disaster. This property costs roughly $750,000, documented on the Saranac real estate. 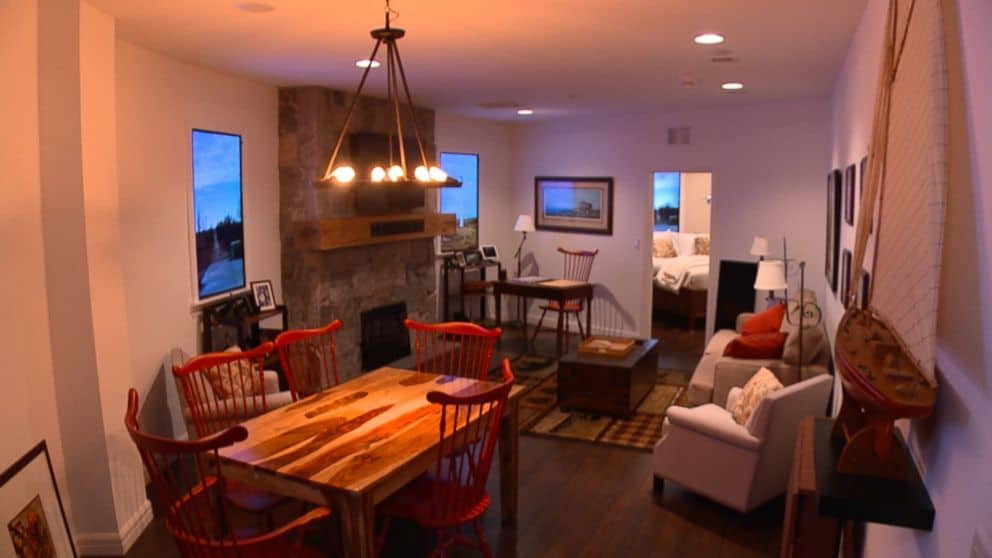 It looks like a cabin home acting as a decoy house at the site, though the real home lies beneath the closet. Once you are in the decoy house, you will enter the closet that will lead you to the 2000-pound steel door. The decoy area acts as the command center, and it covers a space of over 2,000 feet for the living area with a bedroom and kitchen. On the other hand, its base part is where you will find the restrooms and additional bedrooms.

These bomb shelters have windows with views that mimic the outdoor lighting. Again, the Silo Home also delivers luxurious amenities like the main suite, a tiled jacuzzi, and a gourmand kitchen.

Trident Lake is another great option that you could go for if you are looking for a safe room. These bomb shelters are spread over 700 acres, and it has 600 condominiums, an athletic center, a golf course, polo fields, seven outdoor and indoor sports courts, gun ranges, 45 acres of water sports, and 12 helipads. 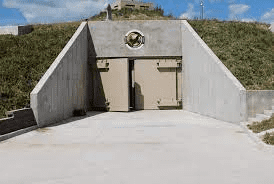 The gigantic 55,000 square feet fountain acts as a symbol of wealth and luxury. Ninety percent of the underground bunker faces a waterbody to deliver a safe and calm environment. The internal space varies from 900 to 7200 sq ft per your desire.

The Grand Canyon Cavern Suite wil provide sufficient thrill to people who visit the place. It is located in Peach Springs, Arizona and once acted as a fallout shelter. In 1927, Walter Peck uncovered the underground caverns while looking for gold and eventually decided to turn it into an attraction. 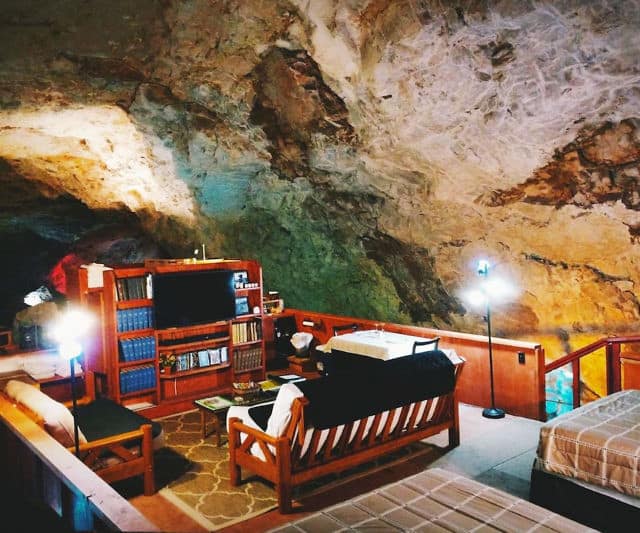 Most owners have bought this property and use the caverns for different purposes. A group of pals bought the property in 2001 and turned it into a luxurious suite with 220 feet by 400 feet range.

The Global Seed locker is one of the world's largest bomb shelters. If you are trying to protect yourself from any upcoming apocalypse, you could purchase the Global seed. It is located deep inside the mountain on a remote island in Svalbard Archipelago. It is a long-term seed storage structure built with durable material and can withstand the challenge of natural or artificial disasters. 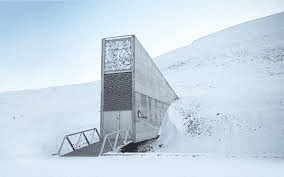 This luxurious seeds bunker can hold up to four and a half million seed types in 3 cold storage units. Since the bunker is 100 meters into the mountain, the temperature reduces the need for electricity-powered storage and creates a secure environment.

The Greenbrier bunker was initially built to protect the US government Congress during the cold war. The storm shelter was the secret hiding place in the West Virginia Wing of the renowned Greenbrier Hotel for most years until it was revealed in the Washington article. 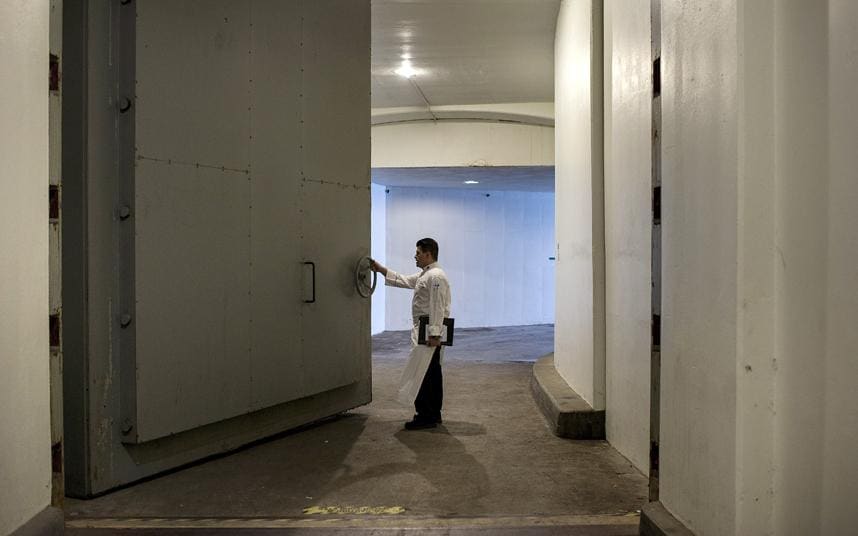 These bomb shelters have two conference spaces side by side, with 435 and 100 seats, respectively. The bunker is designed to protect from nuclear attacks, and it has the most delinquent technologies.

The Subterra Castle is a great bomb shelter that shields its users from harsh weather, thermonuclear war, earthquakes and other apocalyptic events. It covers 34 acres of the estate, which has great facilities, including an airstrip. This Subterra Castle was purchased by Ed Peden for $40,000 and converted from a former junk heap into a modern-day castle. The complicated underpasses of the site last 10-15 feet underground.

The US Safe Room is a luxurious underground bunker that provides a perfect framework for your resting plan. The bunker is a completely underground unit that will shield you from danger outside. The best part is that it's custom-built for your needs, meaning it can design the bunker as a media room, gym, home office, or fallout bunker. 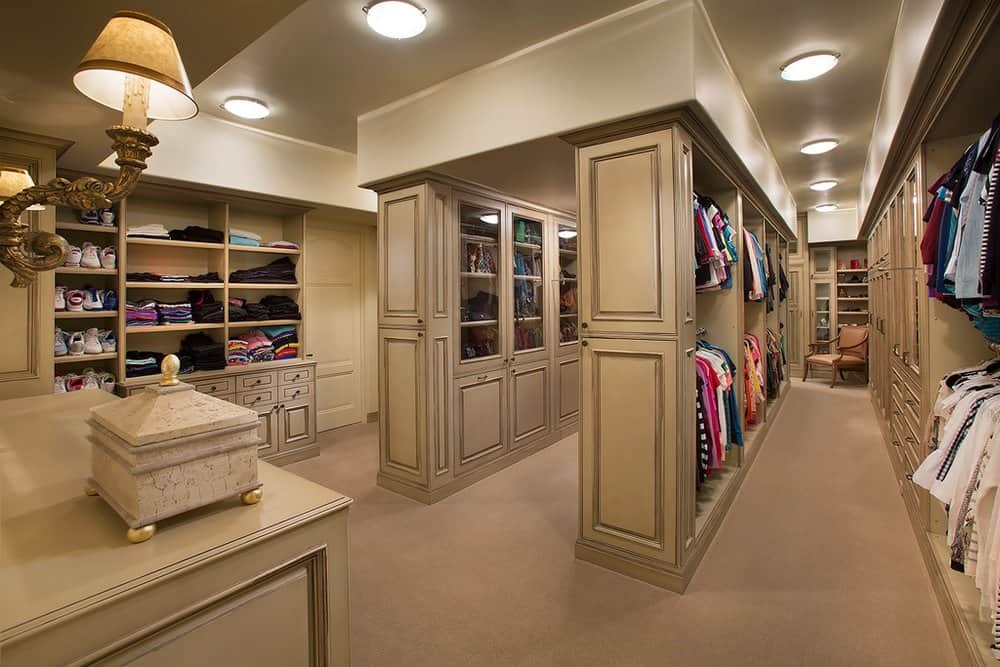 Again, the bunker is designed to resist any force, and its units are equipped with security doors covered in steel. Nevertheless, since the primary role of a bunker is to keep people safe, the American safe room is designed with floor plans with durability, economy, and comfort.

Unlike most doomsday underground bunkers, the entry point of this Las Vegas underground bunker is designed like rocks that disguise the surrounding. The enormous 14,620 square feet bunker is 26 feet below the ground and is protected by the house above the ground. It was initially built when the cold war was at its peak, and most of its room will reflect that period. Las Vegas underground shelter has concrete columns that are turned into artificial trees to improve the quality of the space. Additionally, it has amazing features that include a spa, a guest house, a pool, a fountain, and a bar. Again, it has five bedrooms and six luxurious bathrooms to enjoy your stay. 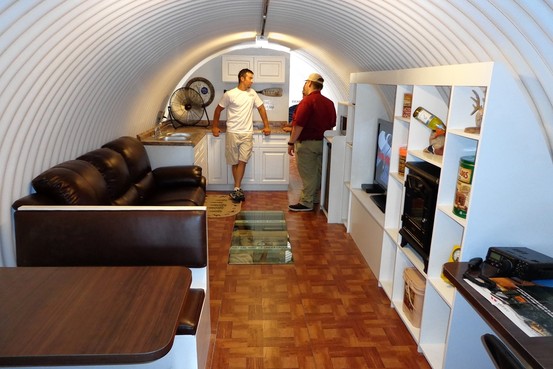 The Aristocrat is a top-notch underground bunker designed by the Rising S company. The Rising S company bank is specially designed to accommodate up to 50 people. Again, the bunker has fantastic amenities like a hot sauna, a gym, a swimming pool, a game room, a theater, and a bowling alley. The Aristocrat will also provide multi-vehicle garage space, a gun range, and a spacious dining area and living rooms.

1. How much does an underground bunker cost?

The prices of different bomb shelters will vary depending on various factors. For instance, a 200-square-foot bunker will cost around $37,000 to $65,500. Smaller bunkers can cost around $19000; however, you can spend upward of up to $7 million for a larger underground bunker.

2. How long can you live in a bunker?

It is recommended that an average of 5 to 7 years lifespan on a bunker without Capillary Concrete. Nevertheless, you can survive more years in a well-equipped and prepared bunker.

3. How deep should a bunker be underground?

The perfect bunker depth advised by experts is 10 feet. The 10 feet depth will help protect you from most catastrophes, and there will be no danger of staying inside. The general rule is that the foundation level to the top of your shelter should be 10 feet.