Architects have for a long time interrogated the possibility of “a city in the sky.” With the continual densification of cities, it won’t be long before architects, urban planners and city authorities will consider housing a mini-city in a single building the norm and not the exception. MVRDV has been exploring the new urbanism problem for quite some time and Peruri 88 sees them partnering with the Jerdi Partnership and Arup Dublin to present a new icon for the Indonesian city of Jakarta. The building brings together a complex stew of programs that include parking, retail, offices, residential living, entertainment facilities, a wedding house and a mosque. However, what stands out in the proposal is the design team’s desire to vertically integrate green and open spaces in what would have otherwise been a banal jumble of concrete and glass boxes.

Peruri 88 is vertical Jakarta. It represents a new, denser, social, green mini-city, a monument to the development of Jakarta as a modern icon literally raised from its own city fabric – Winy Maas, MVRDV

The commercial podium of Peruri 88 was mainly designed by the Jerde Partnership. Borrowing inspiration from lush jungles, stone and encompassing ocean setting of Jakarta, the design team centred the podium’s programs around a major public plaza. This defining element is sheltered by stacked volumes of the blocks above. From the plaza, one will be able to appreciate the layering of the various outdoors spaces and how they come together to serve the dual function of shading and ventilation. The atrium is connected by several escalators, some of which look grandiose compared to what we may normally expect of a typical mixed urban development. In fact, the human scale seems to have been disregarded here and the escalators look like little strings decorating what is a massive space.

Following the commercial podium, the building presents a variety of housing and office typologies. Offices will range from large open plates to little units that explore the concept of living and working under the same roof. The residential units come in lofts, townhouses, terraced houses and patio living. Each of the blocks that constitutes the overall composition features a roof park that offers semi-public gardens and a host of shared activities like play areas, gymnasia, outdoor restaurants and swimming pools that serve the office employees and residential inhabitants. The tallest tower will house a luxury hotel from the 44th to 86th floor and will be topped by a panoramic restaurant and viewing deck on the 88th floor.

As complex as the proposal seems, Arup has designed the structure in a way that makes the building financially viable. Instead of going with a grid structure of columns, the structural engineering team has instead suggested the use of five cores to support the whole structure. The cores support four traditional towers which in turn support the suspended volumes. Watch the project animation at the bottom of this post to appreciate how the whole thing comes together. With the popularisation of green canopies in the skyscraper typology, it’s going to be interesting to see the viability of having dense tree cover way up from the trees’ more ‘natural’ habitat. Just how much soil will be required to make such a green canopy possible? And what will be the structural and drainage implications of having what may be a complex green roof slab design?

Peruri 88 has received mixed reactions from the public and architectural enthusiasts. Some critics consider it to be an ironic jumble of conservative looking buildings; that sits ignorant of its historical and architectural context. However, some view it as an idea whose time has come – a welcome addition that will for sure see Jakarta rise amongst its peers as being an architectural destination. The fact is that vertical city living is still a young architectural concept that requires more exploration and experimentation. The norm is skyscraper design has seen the architect reproducing the plot with similar or near-similar floor plates. In Peruri 88, we see a desire of multiplying the replaced green area with multiple green space configurations. Ultimately, we won’t be able to tell the success of the building until it is occupied, in the event the proposal gets approved by the city authorities. 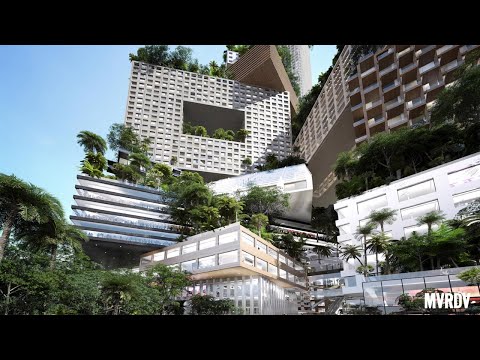