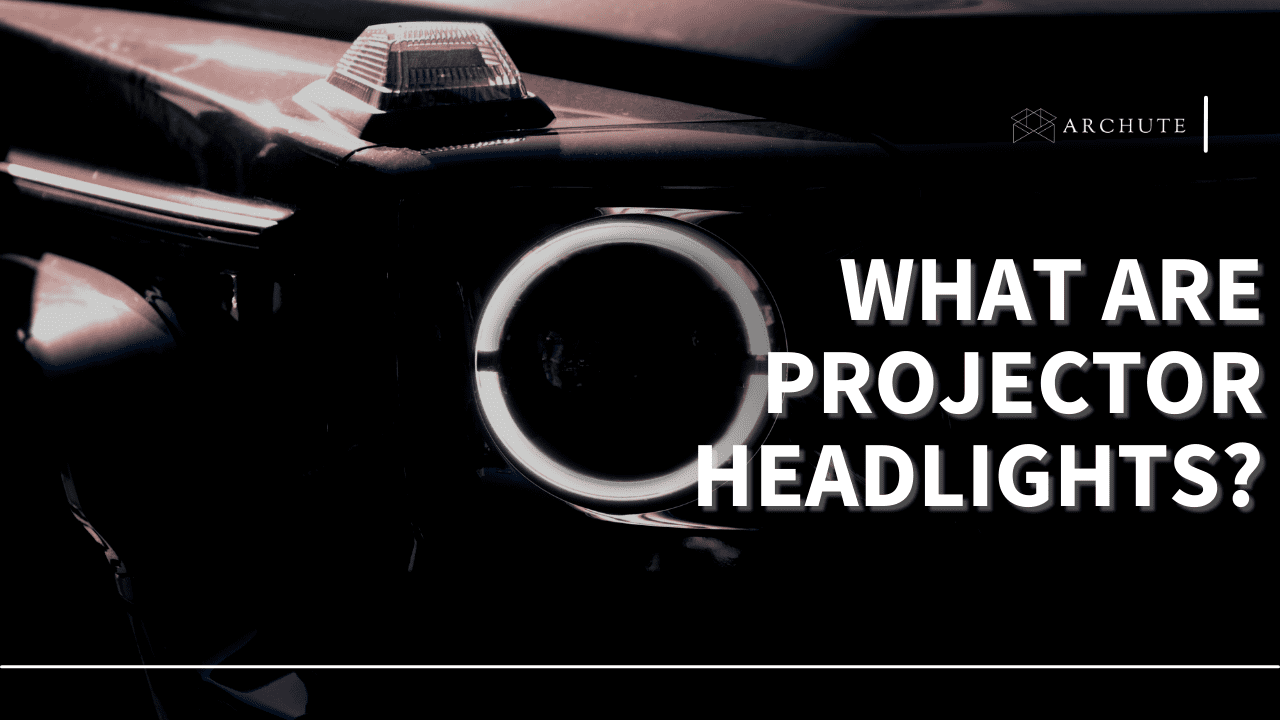 What Are Projector Headlights and How Do They Work?

Headlights have become a standard feature of vehicles on the road. They illuminate by projecting light onto the road from the headlight, also called a headlamp, via thick concave mirrors and magnifying lenses. As technology has evolved, more and more cars are using projector lights for their existing headlights. So, what are projector headlights?

In this article, you’ll learn about projectors, from their historical roots to their practical applications in modern vehicles.

What Are Projector Headlights?

They can use high-intensity discharge (HID) and light-emitting diode (LED) bulbs that are too intense to be used in traditional reflector headlights.

A projector headlight utilizes a single bulb in place of the two bulbs used in a traditional dual-beam design (one for a high beam and one for a low beam). Most projector headlights use HID Xenon bulbs. However, halogen and, more recently, LED systems are also available.

Unlike traditional parabolic reflectors, the projector headlight’s single bulb is positioned in front of an elliptical one. All the light from the bulb is directed toward a single point in front of the elliptical reflector, where a shutter meets it.

A projector headlight has a shutter that protrudes upward from the bottom, partially obstructing the beam so that it shines downward toward the road.

Additionally, the top of the shutter is tapered, which lowers the beam on the left (or right, in nations where traffic is driven on the left) and lessens light that is shone into the path of oncoming vehicles. The shutter is lowered when the driver selects a high beam, allowing the headlight to shine without obstruction.

Projector headlights can use a basic objective lens whose only purpose is to equally disperse the pre-shaped beam, as the shutter regulates the beam’s shape.

How Do Projector Headlights Work?

While conventional headlights use flat, concave lenses to focus light, projector lamps use spherical lenses to focus and intensify the light. The lenses act like magnifying glasses, allowing you to see finer details. As a result, a narrower, more concentrated beam of light is emitted after being absorbed.

The lenses of projector headlights are another reason for their distinct and high-end appearance. From the front, the car will look like it has real, round eyes.

As an added safety measure, projector headlights have removable covers. This enables the light to be shone farther down the street. This innovative design element also shields other drivers and motorists from being blinded.

To accommodate a wide variety of preferences, projector headlights come in various styles and sizes. For your convenience, we have compiled a list of the various alternatives available.

Compared to halogen bulbs, HID bulbs are brighter and last longer. Currently, this type of bulb is used in many vehicles. However, car owners should take care to prevent installing HID bulbs in projector headlights made to work with halogen bulbs.

When HID bulbs are inserted in a halogen projector headlight, they can make it difficult for oncoming vehicles to see because they are brighter than halogen lights.

One of the most popular types of projector headlights for modern vehicles is the LED type. They last longer than halogen and HID headlights and are more energy-efficient than other types of bulbs. LED lights have an operational lifespan that can even surpass that of a standard car.

About half a dozen different technologies, including LEDs, incandescent bulbs, and cold cathode fluorescent lighting (CCFL) tubes, are used to make these rings.

How to Choose Projector Headlights

The most popular options for projector headlights are HID and LED. Here are some factors to take into account when deciding which of these headlights to use:

LED bulbs are more energy efficient than HID bulbs but are brighter and can illuminate a wider area. When it comes to lighting, HIDs are the most powerful. However, HID headlights only last a quarter as long and are not as sturdy as LED alternatives.

Unlike HID bulbs, LED bulbs endure longer than they do, frequently outlasting the usefulness of the vehicles in which they are installed. There is no other form of commercially available headlight that can compare to the longevity of LED bulbs.

Not all cars are equipped with the necessary hardware to run LED lights. Many older cars lack the heat sink necessary for LED lighting. HID bulbs might be a better alternative because they’re simpler to install if you pick projector headlights for an older vehicle without a portable car heater.

When it comes to reflector headlights, a lot of vehicles have used them since the very first ones were made. In order to distribute the light beam over a larger region, reflector headlights use a series of slanted mirrors that bounce and redirect light from the bulb to the mirrors.

For a reflector headlamp to function, the housing’s mirror must be completely filled by the light from the headlight bulb.

When you point a light into a bowl, it will shine in the direction you point it. This timeless design has stood the test of time for good reason: it performs an essential function in our cars.

A projector retrofit could be the solution if you already have a reflector headlamp and are looking for ways to increase illumination. There are three primary types of headlight retrofitting:

1. Retrofitting a Projector Into a Reflector Housing

This type of retrofitting can be the most labor-intensive. First, this process requires removing the reflector internals by opening the headlight. Then, to make the projectors fit, you’ll probably need to cut or trim something. A universal retrofit kit would come in handy. These kits include projectors, bulbs, shrouds, and everything else you’ll need.

Installing a retrofit kit designed specifically for your car will be much simpler than using a generic one. In addition, vehicle-specific kits are tailor-made for their intended use, so no additional adjustments should be required.

If you own a headlight with the best projector inside, you can replace it with a better projector. The most frequent replacement is projector headlights that use halogen.

Many halogen projectors owners will replace them with HID or LED models instead. With this change, the driver will have a lot more practical light for driving.

Projector headlights are ideal for installing an HID kit or an LED upgrade. However, due to several considerations, high-intensity discharge headlight bulbs cannot be installed in reflector headlights.

Here, the light would be too intense and dispersed in all directions, blinding drivers from opposite directions. Of course, this won’t be an issue if your vehicle has projector headlights. Hopefully, you have a better understanding of “what are projector headlights” after reading this article.