There are many reasons why we love Ashton Kutcher. He's an incredible actor, a great dad, knows a little coding, and is into sustainability. The latter is why we're here.

Who would have thought that a farmhouse could be elegant, sustainable, and the perfect home for a Holywood power couple? Well, Ashton Kutcher and Mila Kunis did. Of all the houses he's owned, this is the most notable Ashton Kutcher house.

You might fall in love with this home just as we did. We'll look at how this power couple came up with the idea for this incredible home that sits on a 6-acre property in Los Angeles, and how they executed it. When you think of celebrity homes, a farmhouse is likely the last thing on your mind. But for Ashton Kutcher and Mila Kunis, this was their dream home, and they were going to make it happen.

As Ashton Kutcher told Architectural Digest, "We wanted the house to look like an old barn, something that had been here for decades, that was then converted into a house. But it also had to feel modern and relevant." And they certainly got that.

The farmhouse sits on a 6-acre property and includes the main house, a guesthouse/entertainment barn, and a barbecue pavilion near the pool.

Choosing the Architect and Interior Designer The design process and execution of Mila Kunis and Ashton Kutcher's house took five years, with both actors contributing to the process.

The couple assembled individual Pinterest boards with their preferred designs. And at the end of the process, it was amazing to find that 90% of their images were similar.

In fact, they discovered that most of the houses they had pinned were designed by architect Howard Baker of Backen & Gillam Architects. Therefore, naturally, they decided to go with him as the architect for their home.

Howard Baker is renowned for his ability to create beauty from rustic materials. And as Kutcher states to Architectural Digest, "Howard is like a great software designer, someone who approaches design as an accentuation of function.

Well, they certainly choose the right man for the job.

The couple went with Vicky Charles of Charles & Co for interior design. They loved her whole aesthetic, especially her ability to mix fabrics, patterns, and textures. Mila Kunis would go-ahead to spend months with Vicky looking at colors and materials for this passion project. The architecture of Mila Kunis and Ashton Kutcher's farmhouse was inspired by French Neoclassical architecture. Some notable characteristics include the grandeur of scale and simplicity of geometric forms.

If you want to learn more about architecture, check out our article on the types of architecture that have shaped our modern era. Then, you might get inspired to start your passion project as this power couple did.

The rugged materials and soaring ceilings make this home look like an old barn, which is part of the aesthetic. In addition, the palette of raw materials gives Ashton Kutcher's house an industrial charm.

As expected, Charles did a great job with the interior design. From the images above, you can see the crispy tailored tables and plush seating that feels like you'd be seating on air. Imagine how comfortable relaxing on those seats by the fire would be. Total heaven.

In addition to the seats and the tables, Charles incorporated some stuff from Ashton Kutcher and Mila Kunis' previous houses. These included an extravagant 10-foot-long crystal chandelier and a set of custom silver throne chairs.

The crystal chandelier was especially important to Kutcher as he had commissioned it on a trip to India. Naturally, therefore, Charles had to include this formidable piece into the architecture's humble forms. And she did a great job. 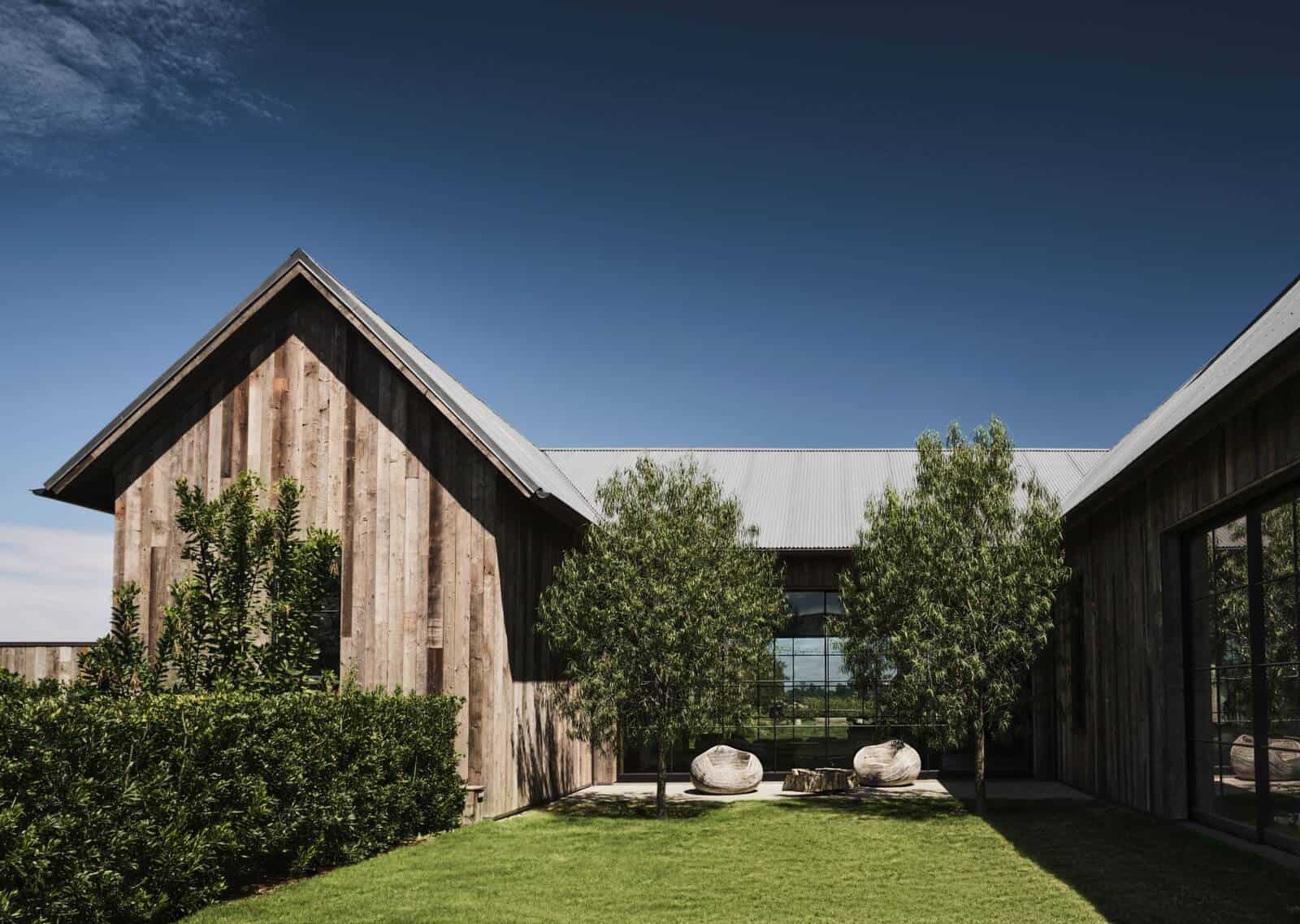 Other notable aspects of Ashton Kutcher's house are the use of photovoltaics to power the home and the regenerative agriculture that they practice.

Photovoltaics is a type of technology that converts light into electricity. This innovative technology uses semiconducting materials such as Silicon to get the job done.

For their luxury barn, Ashton Kutcher and Mila Kunis are able to produce more than enough energy for their home by using solar arrays installed on the property.

In addition to their sustainable production of energy, the power couple also practices regenerative farming. Regenerative agriculture is an upcoming and alternative means of producing food with lower impacts on the environment than traditional agriculture.

This means that their outdoor space functions both as an entertainment spot and a garden for their food.

Now that we're done looking at Ashton Kutcher's sustainable luxury home in Beverly Hills, let's look at some other homes he's owned in the past. Ashton Kutcher and Mila Kunis bought this beach house during the pandemic. It is 31,000 square feet and is located in the beach town of Carpentaria. Thanks to the open plan of the house, you can view the beach from the house which is likely how Kutcher and his family enjoy some amazing sunsets together. With this kind of class and luxury, it's no wonder that the property was priced at $10 million. Unlike the farmhouse, which mostly has a rustic charm about it, this beach house has a modern vibe to it. This $10 million property has 6 bedrooms, 6 bathrooms, a guesthouse and a large patio. You can almost picture the family of four having a great time in this house.

2. The Mansion in Beverly Hills Ashton Kutcher and Mila Kunis are not new to Beverly hills given. After all, their first home was a mansion in Beverly hills. This beautiful piece of property sits on a half an acre plot and was built in 1999. The mansion comes with several amazing features in addition to 5 bedrooms. These include a personal gym, a temperature-controlled wine room, a sauna, and a prestige kitchen with white countertops and a kitchen island. This mansion also features a free-standing bathtub in the master bathroom and beautiful crown moldings all through the house. Free-standing bathtubs have become increasingly popular in many homes, given their unique and elegant designs. Luckily, you can situate your free-standing bathtub anywhere without worrying about dripping water all over your floor. This is thanks to an array of convenient bathroom rugs you have available to you. Which of these Ashton Kutcher homes did you like the best? Although the luxury farmhouse is a big change from the other two homes, you can still see a pattern of good taste, attention to detail, and elegance.

Therefore, the next time someone says that Holywood celebrity and sustainability are antonyms, be sure to bring them to this article, where they'll learn a bit more about your favorite celebrity.

And if you want to learn more about celebrity homes, check out this article about Nicki Minaj's $10 million mansion.

1. Where do Ashton and Mila Kunis live?

The power couple lives in their dream home in Los Angeles. This is a sustainable farmhouse that they worked on for 5 years.

The luxury farmhouse sits on a 6-acre property and is the brainchild of both Ashton Kutcher and Mila Kunis. The couple worked with architect Howard Backen and interior designer Vicky Charles to bring their dream to life.

Howard Backen is a genius architect known for his work with rustic materials. He worked with interior designer Vicky Charles to bring Ashton Kutcher and Mila Kunis'dream to life.