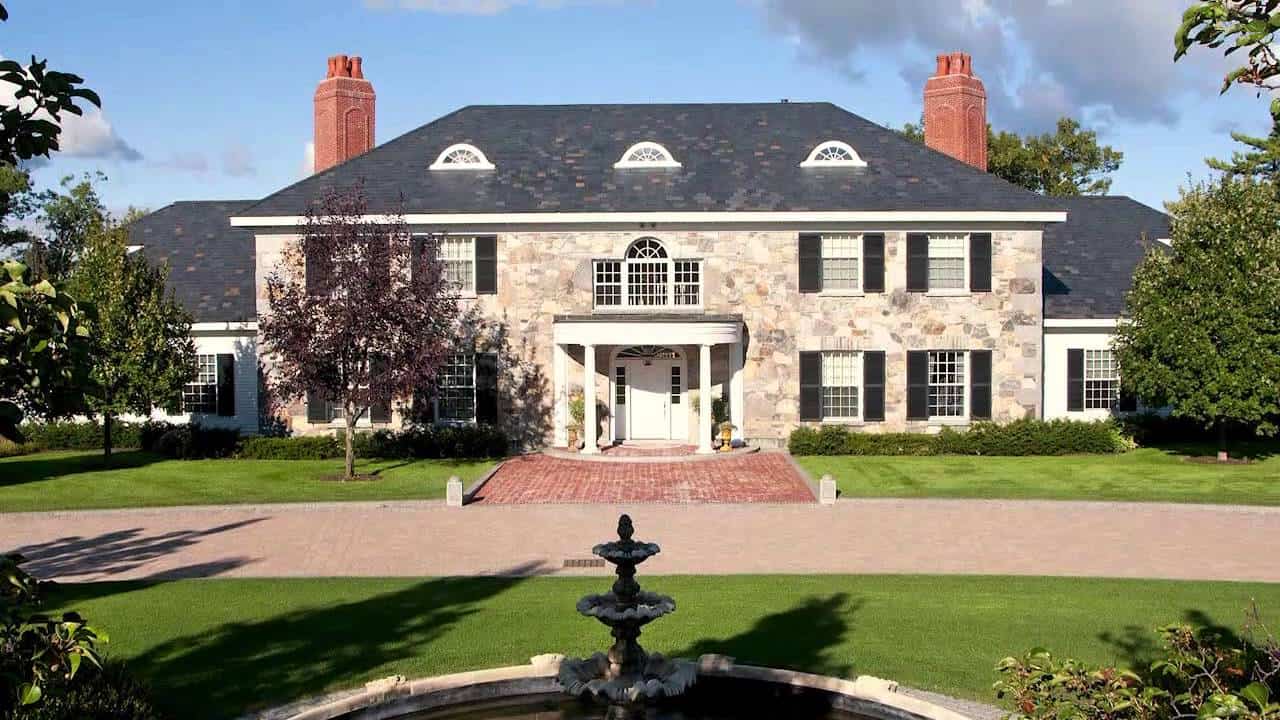 Where Does Adam Sandler Live and How Big is His House?

Adam Sandler is not an unfamiliar name if you are a fan of comedy films. He has always come across as humble, hilarious, and sweet in most of his films. However, you might not know that he is quite rich (with a net worth of $420 million) due to his long and prosperous career as an actor and producer in Hollywood. That said, where does Adam Sandler live?

Adam Richard Sandler is an American actor, born in Brooklyn, New York, but grew up in Manchester, New Hampshire. He was only 6 years old when his family relocated to Manchester. When he graduated from High School, he moved back to New York, where he attended NYU’S Tisch School of the Arts.

Who would have guessed that this funny guy would become a mega-successful Hollywood film producer? Did I mention that “Hustle” is his latest project on Netflix?

His wealth may not be seen in his daily outfits, but it’s evident in his property selection. So now let’s answer the question, where does Adam Sandler live?

Where Does Adam Sandler Live?

Adam Sandler has properties on the east and west coasts, including Los Angeles, New Hampshire, Malibu, and Boca Raton. However, there is speculation that Sandler has more properties than the general public knows. Still, these speculations have not been formally confirmed due to the reclusive nature of his life.

Here are Adam Sandler’s houses, including the main mansion.

Sandler purchased this 13,000 sq. ft mansion for about $13 million. The property was initially built in 1990 and was previously owned by superstars like Kurt Russell and Goldie Hawn. It sits on a street in the Brentwood area of Los Angeles on two-thirds of an acre of land.

The mansion might have cost him even more with renovations and additional fixtures. Besides, this is where Sandler, his wife Jackie Sandler, and their children enjoy luxury and privacy.

The Pacific Palisades property is ideal for his children, given the family-friendly neighborhood, outstanding schools nearby, and quiet streets. Sandler also purchased the adjacent home, which is about 3,970 sq. ft with 4 bedrooms and 4 bathrooms. So, the total worth of the combined properties is estimated to be $28 million.

The Sandler’s 13,000 sq. ft mansion has a huge yard terrific for his kids, who enjoy playing outdoors. Also, the lawn is great for hosting the ultimate outdoor party with friends and family.

The property includes seven bedrooms and nine bathrooms. As mentioned earlier, Adam Sandler also purchased the house adjacent to their home, a 3,971-square-foot residence, for additional living space and privacy.

The estate serves a good purpose, and Sandler often invites family and close friends to his parties and movie premieres. Sandler once admitted (during one of his interviews at Jimmy Kimmel Live) that his home was once so crowded with visitors that his mother and mother-in-law had to share a bed.

Adam Sandler is a big basketball fan, and so is his wife, who is also an actor. He is regularly seen playing basketball with NBA players. As a result, the sports area is one of the most used areas of their Pacific Palisades mansion. It also has all the workout equipment and amenities they need to keep in shape.

The property has a swimming pool with enhanced safety features where they swim whenever they like. In addition, the pool is close to the lawn, making it convenient to have a barbeque and pool party whenever possible.

The Pacific Palisades home is surrounded by trees giving the family lots of fresh air and more privacy. Besides, the trees and flowering plants add a touch of elegance to the general appearance of their property.

Adam Sandler has a condo in Boca Raton’s Highland Beach, Florida. Though some people speculate that he bought it for his loving mother, we don’t have official confirmation from him.

Some speculate that Adam Sandler acquired another property on NE Spanish Trail in the region. Still, we cannot confirm these speculations due to his private personal life.

Sandler bought this magnificent property for $3.9 million in Central Malibu in 2001. The home’s estimated worth has nearly doubled in the last few years. Its current property worth is $6.05 million, which is 51.64 percent higher than the area’s median listing price.

The 1,315-sq ft single-family home finished construction in 1947. It has three bedrooms and three baths. It also has fire pits on the expansive entertainment patio on the beach level with a skylight across the house’s length. Besides, the property is on the beach, a highly sought-after street with breathtaking views.

Adam Sandler has been making movies in New Hampshire’s Lake Winnipesaukee for a while. However, it has been reported that the actor doesn’t own the lake property. Conversely, Sandler’s childhood house is in New Hampshire; he bought the property for his parents. Although his parents could have a large and lovely home like Sandler’s, they still opted to live there.

Frequently Asked Questions on Where Does Adam Sandler Live

Sandler was the youngest of four children in Manchester, New Hampshire. He was academically disinclined and was regularly disciplined in school for his humorous pranks. At the prompting of his brother, he made his debut at a stand-up comedy club in Boston at 17.

So, where does Adam Sandler live now? He lives in Los Angeles. Sandler paid $13 million for his magnificent property when his film Spanglish was released in 2004.

3. Where is Adam Sandler’s house in Florida?

Adam Sandler, well known for his appearances on Saturday Night Live, loves Boca Raton, Florida, so much that he even purchased a house there. Sandler’s family sometimes stays at the house, taking advantage of the luxurious living alternatives available in Boca Raton.

4. Is Adam Sandler, the owner of Happy Madison?

Adam Sandler launched Happy Madison Productions in 1999, and it’s popular for its comedy movies. The elderly man in the production logo is Sandler’s late father, Stanley, who also exclaims “Terrific” in the accompanying audio.