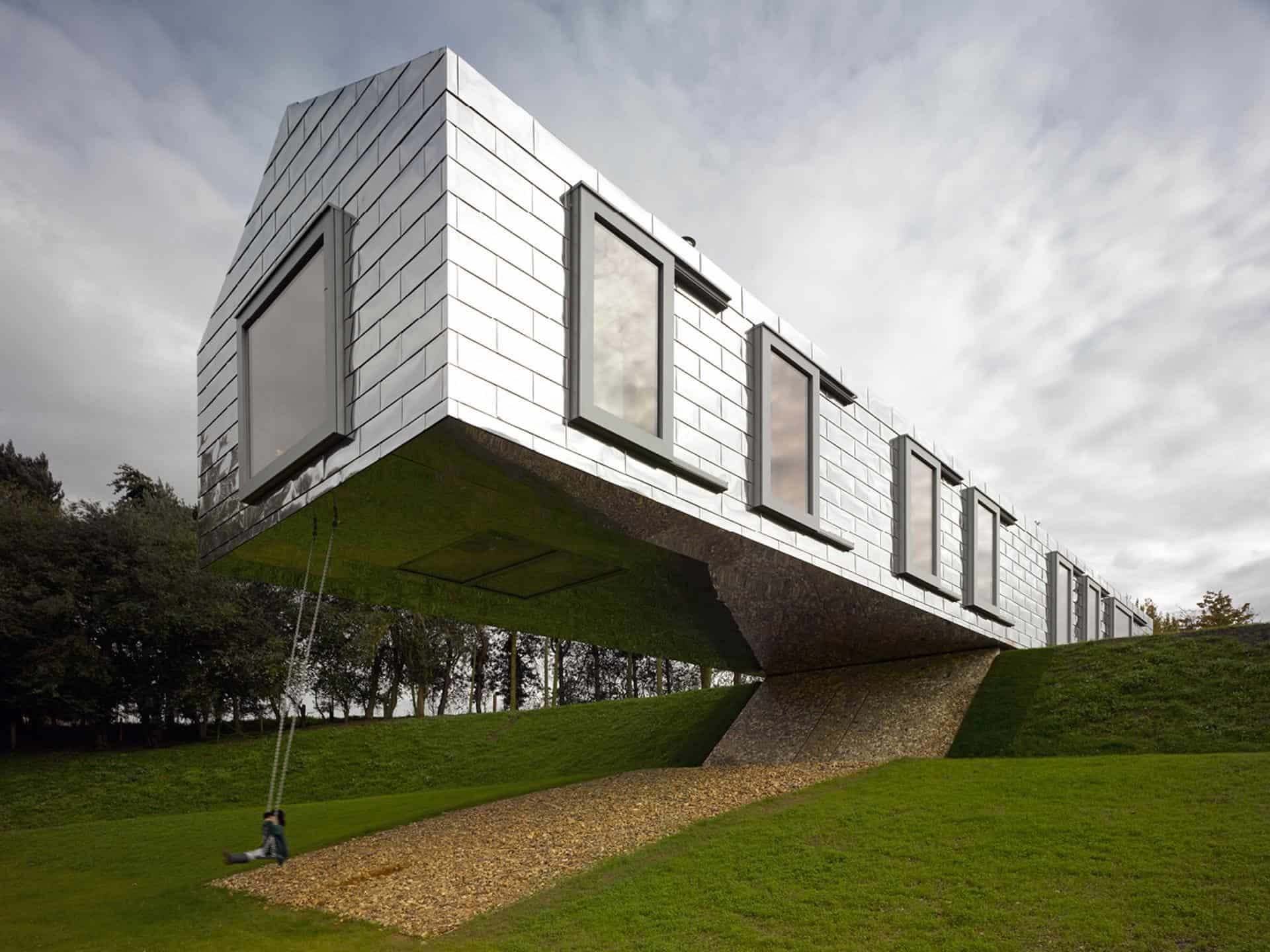 10 buildings around the world that defy the laws of physics

For the most part, buildings are designed with the law physics in mind. However, there are certain buildings that are designed and constructed and will have you wondering if gravity is really just in our minds. This is a compilation of some of the most interesting buildings we have come across in the world that defy the laws of physics. 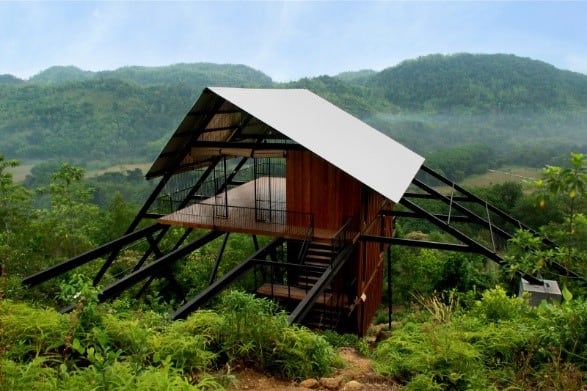 Estate Bungalow – Mathugama is situated in Sri Lanka and was designed as a peaceful retreat for a young entrepreneur who wanted to be able to escape the busy life of the city.

The bungalow sits on top of the raised terrain of the 17 ha estate. Its elevated view allows for an undisturbed view of the surrounding nature of the estate which includes the valley below and the hills beyond.

The Architect who designed the building wanted it to feel like it was “touching the earth lightly’ but still giving off a cozy and protective effect. The structure is inspired from the “Chena Watch- Hut” which is commonly found in rural Sri Lanka. A watch- hut is an elevated refuge that farmers use to protect their crops overnight.

The bungalow is designed such that the living and functional aspects are tucked into a compact timber clad box and the elevated deck extends off the hill. The simple asymmetric roof creates a certain imbalance with its “touch the earth” effect. However, despite the imbalance, it still feels whole.

The bungalow was constructed from steel, bamboo and wooden cladding. The elevated position does not interfere with the environment as it leaves the surrounding vegetation and flowing water untouched. What’s further interesting is that it was designed in such a way that it can be disassembled easily hence leaving the space as it was originally.

The Balancing Barn is located in the British countryside near Thorington, Suffolk. It is next to a small lake and is designed to make people re-evaluate the country side whilst also making contemporary architecture accessible. The aim is to give people a new way to experience the country side.

Its design is a dramatic response to the picturesque effect of the natural location. The traditional form and pitched roof are designed in reference to the local agricultural vernacular but with an updated aesthetic. The Barn is 30 meters long with a 15- meter cantilever over a slope which plummets the house headlong into nature.

This allows for a linear experience of the surrounding nature. As the site and landscape slope, one is able to experience nature first at the ground level and later on at tree height. At its midpoint, the Barn begins to cantilever over the descending slope which creates a balancing act that is only possible due to the rigid stricture of the building. Resulting in half of the barn hanging freely in space.

This is made possible by the central concrete core that helps balance the barn. The section of the barn that sits on the ground is constructed from heavier material than the cantilevered section.

The outside of the barn is covered in metal sheets aimed to reflect its natural surrounding and changing seasons. 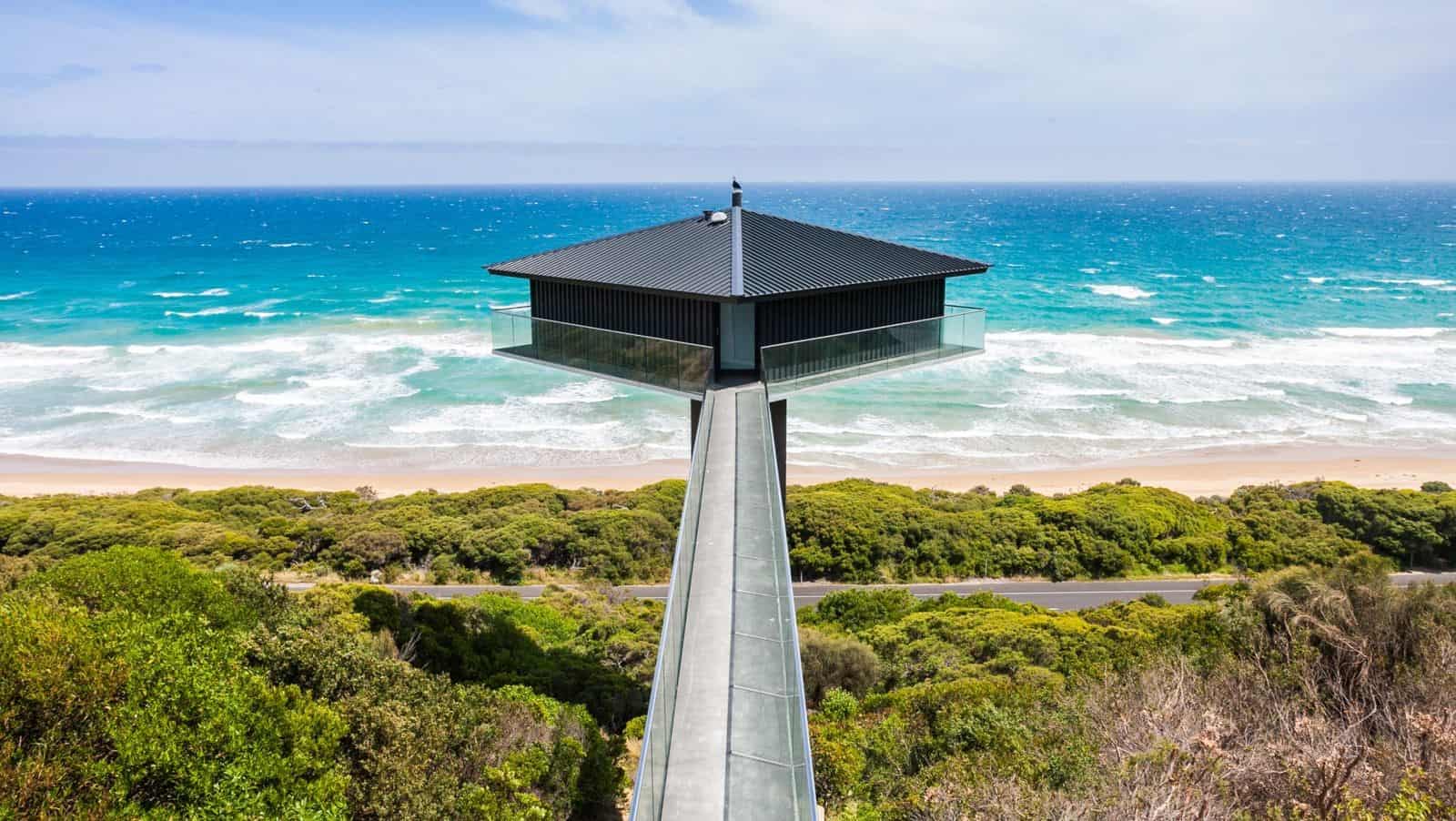 It is not hard to see why The Pole House is the most photographed home in Australia. Suspended 40 meters above Fairhaven Beach, it offers a stunning view of the ocean and is surrounded by lush green forests. The Pole House was originally designed in the seventies by Frank Dixon who loved the isolated and wild stretch of the coastline hence decided to build a vacation home where he and his and family could enjoy the scenery.

The building features a perpendicular walkway that connects it to the street while the structure is supported with a thin pillar.  The structure was designed to reflect a pavilion with the square capped with a pointed roof.  Unfortunately, due to the effects of the surrounding natural elements, the house was damaged by the incessant winds and ocean spray hence making it fragile. It was however restored with the help of the Franco Fiorentini of F2 Architecture. The original design was kept as is with a few modern touches like the retractable glass walls and glass balustrade.

4. Takasugi – an and The Flying Mud-Boat, Chino, Japan 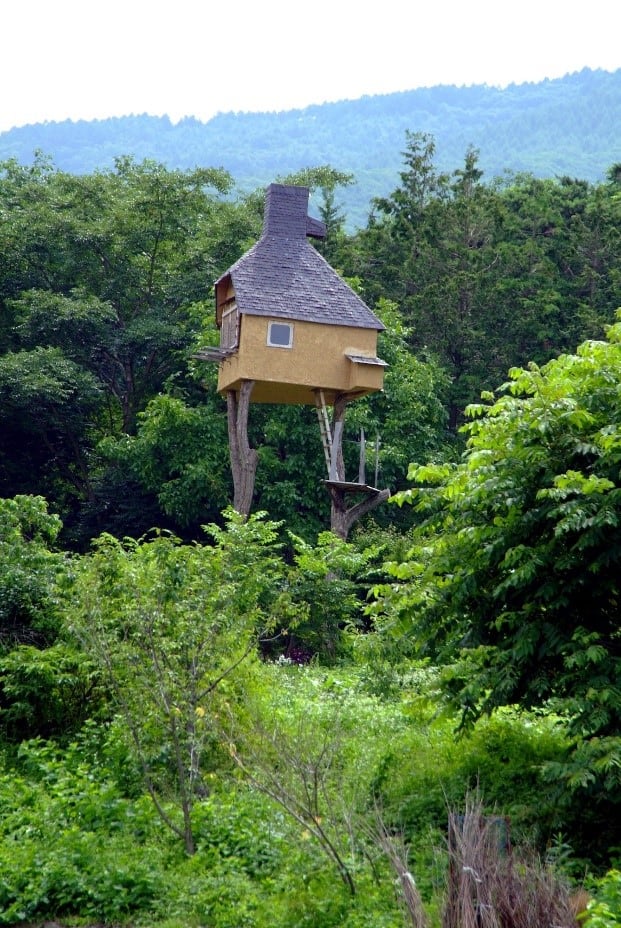 Courtesy of Architectural Digest ( Takasugi –an)

Takasugi-an is a 2.2m wide  located in Chino, Japan. Its name literally translates to “the teahouse built too high” and was designed by Fujimori Terunobu. The teahouse is designed such that one has to first climb up a freestanding ladder that is propped up against one of two chestnut trees. What’s interesting about the trees is that they were actually cut and removed from a nearby forest and transplanted deep into the ground so as to support the weight of the tea house

The Flying Mud Boat is also very unique as it is the only suspension in the world to run cables under its base foundation. It is constructed with natural building materials such as wood, plaster and earth which are often found in traditional Japanese architecture.

Takasugi- an and the flying mud-boat are part of a teahouse series. 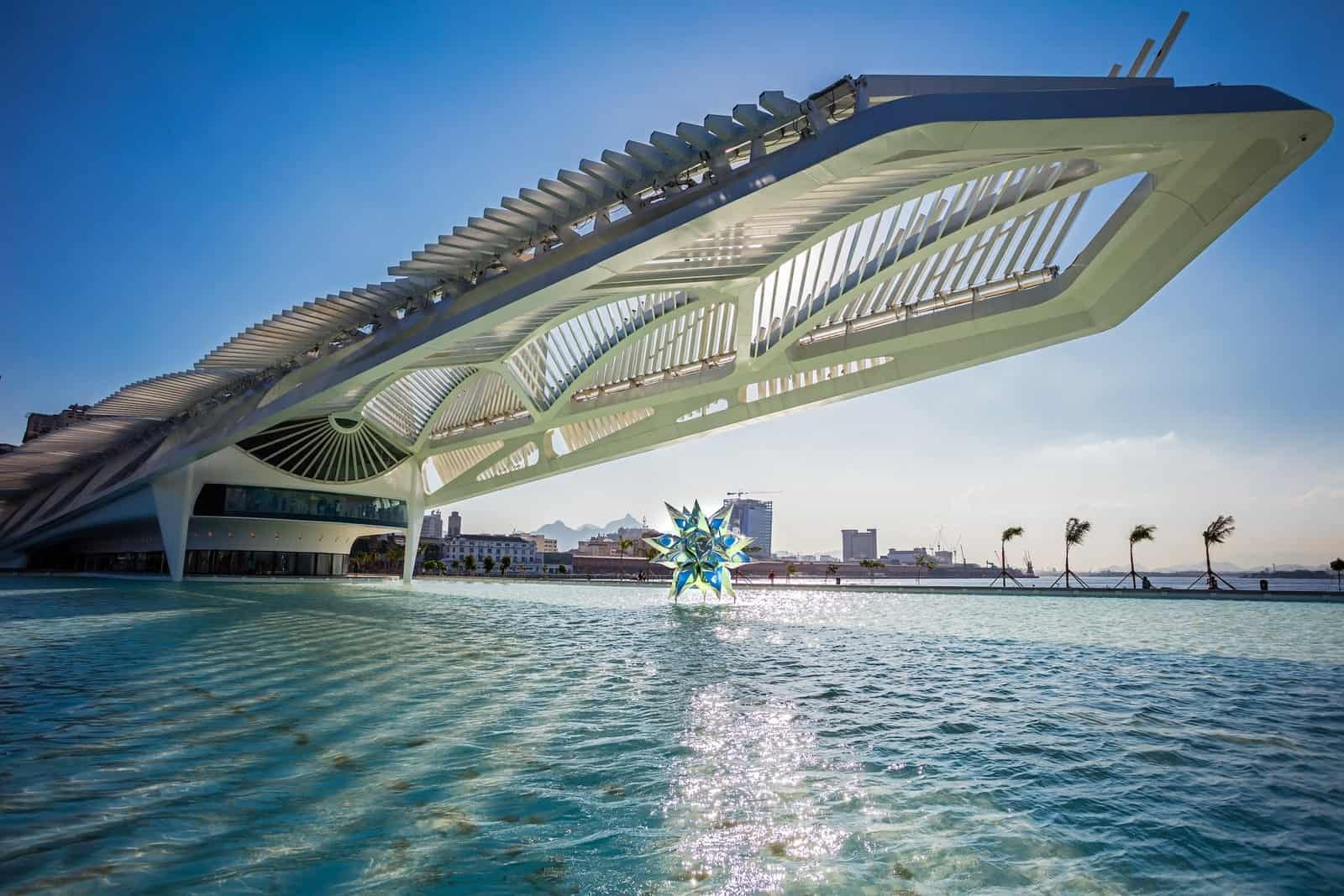 The Museu do Amanhã (The Museum of Tomorrow) was designed by architect Santiago Calatrava.

The museum’s design is inspired by the Carioca culture and explores the relationship between the city and the natural environment. The building includes a 7,600 square meter plaza that wraps around the structure and extends along the dock. It also features large overhangs that are 75 meters in length on the side facing the square and 45 meters in length on the side facing the sea. The building also features a roof that is 10m high and has panoramic views of Guanabara Bay. The museum is surrounded by a reflection pool which gives the illusion that the Museum is floating.

The Museum exhibits are geared towards addressing issues on population growth and increased life expectancy, consumption patterns, climate change, genetic engineering and bioethics, the distribution of wealth, technological advances and changes in biodiversity. 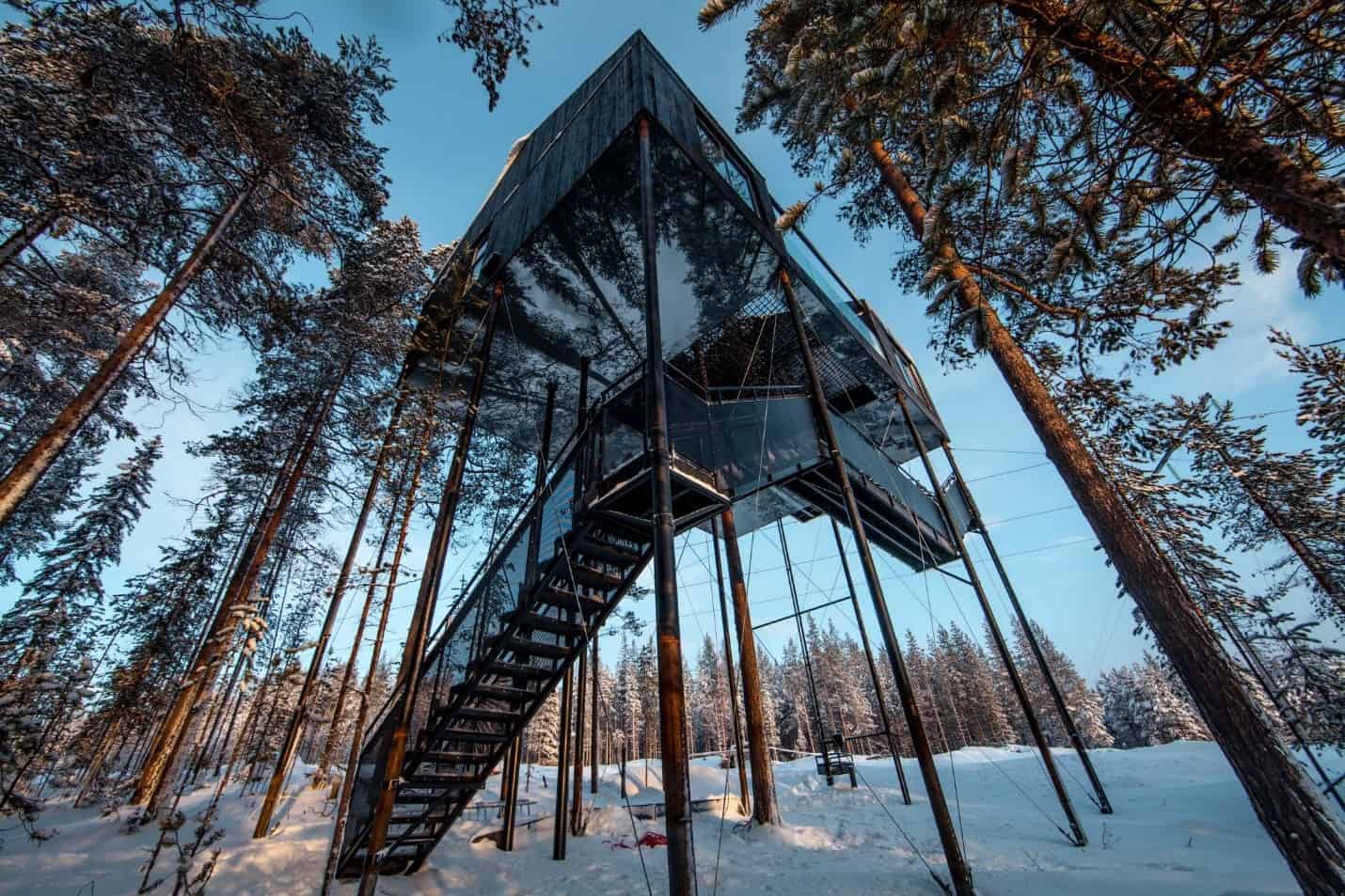 The 7th House is a Treehotel situated in the tall pine forest of Harads in Norther Sweden. It is elevated 10 meters above the ground providing a breathtaking view of the Lapland treetops and the Lule River. The 7th room was designed with the aim of bringing people and nature closer. It features a netted terrace that is suspended above the forest floor, a tree stretching up through the cabin and large windows. The 7th House is built as a traditional Nordic cabin with the wooden facade being clad with pine boards. The cabin feels like it is part of the forest due to the blurring boundaries between the indoors and outdoors.

The base of the building is covered by a huge aluminium sheet that has printed black and white images of trees which helps to camouflage it within the forest. There’s a small lift that takes guests luggage up while they go up the staircase that weaves up through the tree trunks and columns to the entrance.

An interesting feature of this TreeHotel, is the north facing floor to ceiling window that allows guests to see the Aurora Borealis on a clear day. For this reason, the space with the window, has been named the Northern Light Lounge. 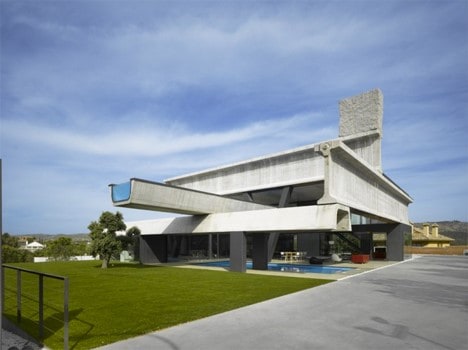 The Hemeroscopium is designed in such a way that its structures seem to be playing a game as they are placed in an unstable balance. The heavy structures were designed to provoke gravity to move the space. The structures are set up in an order in which the pile up hence generating a helix that sets out from the mother beam which is the stable support. They then develop upwards in a sequence of elements that gradually become lighter as the structure grows and end up closing on point that crowns the system of equilibrium. What’s interesting about this structure is that it took the architects only seven days to build.

Fun Fact: Hemeroscopium is a Greek word for the place where the sun sets. The architects designed this space as an allusion to a place that only exists in their mind and is ever changing and mutable. It is not limited by the references of the horizon, by the physical limits and is instead defined by light. 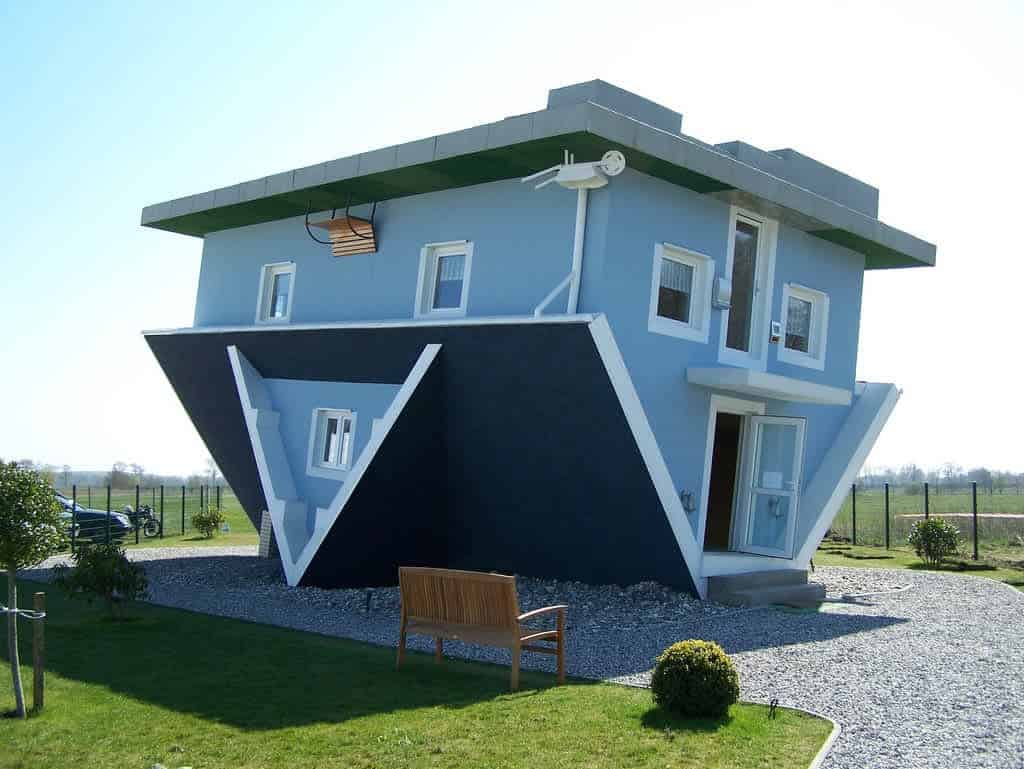 The Upside-Down House was designed by Polish architects Klaudiusz Golos and Sebastian Mikiciuk as part of a project known as Die Welt Steht Kopf (“The World Upside Down”) which aimed to give people a different view of the everyday things.

Going with its theme, everything is inverted to give the impression of actually being upside-down. The only thing not inverted is the stairs that require you to get into the house. The house is built on a 6% incline which gives off the effect of the house having somehow fallen on earth and came to rest on its roof. It was however created for tourism purposes and is not habitable. 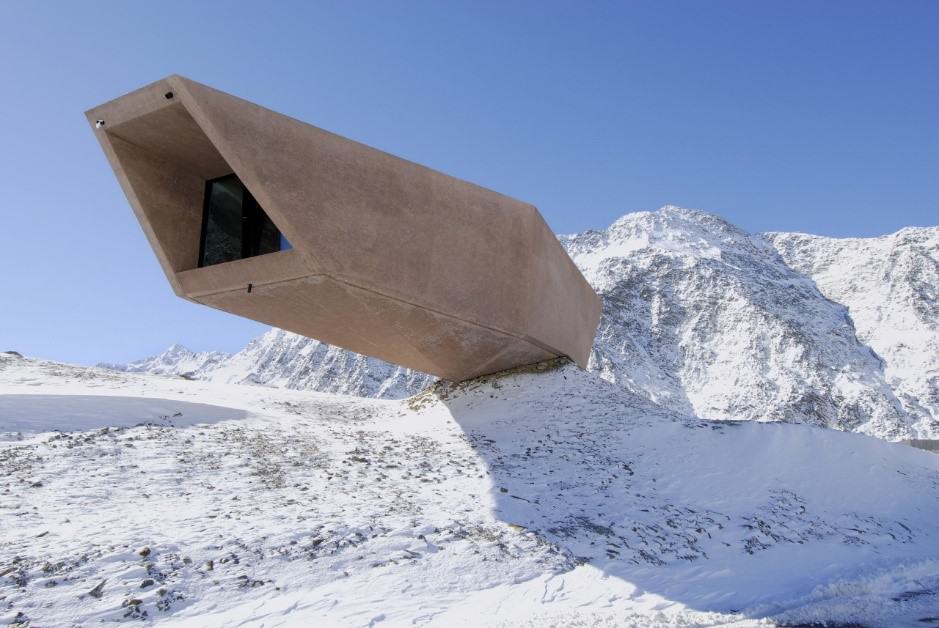 The Pass Museum also commonly referred to as Timmelsjoch Museum was designed by the South-Tyrolean Italian architect Werner Tscholl at the Timmelsjoch . It is a mountain pass that runs through the border between Italy and Austria and is the deepest, non –glaciated indentation in the main Alpine ridge and Brenner Pass.

The building is the centerpiece of a sequence of five small “architectural sculptures” which mark a 12 kilometer-long alpine road that links South and North Tyrol, as well as Italy and Austria, through the Ötztal Alps. The museum was built 2,509 meters (8,230 feet) above the sea level and is exactly on the Austrian-Italian borderline. Due to its 16-meter long cantilevered span, it has the entrance in Austria and the opposite panoramic window in Italy.

Timmelsjoch has a rich history that includes connecting different religions and cultures and providing an important trade route. 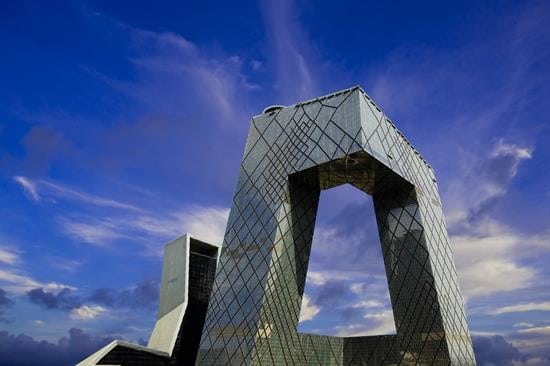 The CCTV Headquarters is a building that is 234m in height and has quite an unusual shape that is described as a “three-dimensional cranked loop’. The building is formed by two leaning towers that are bent at 90o at the top and bottom to form a continuous tube.

The building’s primary support is from the irregular grid on its surface which acts as a visible expression of the forces travelling through the tube like structure.

The cantilevered element of the structure has up to 13 storeys at its deepest point and is suspended 162 meters above the ground. The structure is located in an active seismic zone hence the architects included a unique diagrid exoskeleton that carries the structures extreme loads and transfers them through the superstructure of the building. The tube structure also gives the building the required robustness to withstand any seismic activity in the area hence enhancing the level of safety.