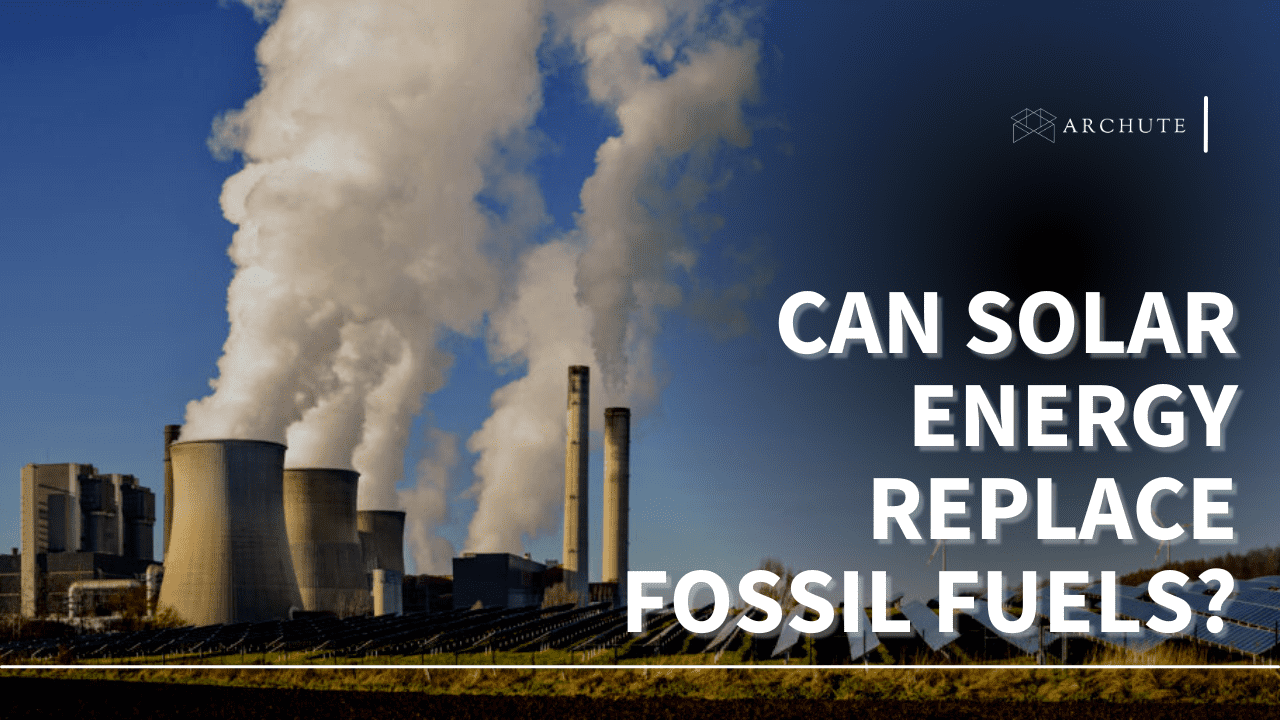 Today, practically every service people use and every product they purchase contains fossil fuel somewhere in the production or delivery process. On the other hand, solar and wind power have become more efficient and cost-effective sources of electricity in recent years. Moreover, rapid advancements in renewable power technology have prompted some observers to consider the total replacement of fossil fuels within the larger energy system. But the question is, can solar energy replace fossil fuels?

The short answer is yes; however, a full transition from fossil fuels to renewable energy will take time. Luckily, as the energy transition demand is growing, so is the enthusiasm surrounding the issue, as seen by policy-shaking worldwide efforts like the Fridays for Future movement, fueled by young activists like Greta Thunberg.

Reasons Why the Fossil Fuels to Solar Energy Transition Is Crucial

According to the World Health Organization (WHO), roughly 99% of the world’s population breathes air that exceeds air quality regulations, endangering their health. More than 13 million deaths worldwide occur yearly due to preventable environmental factors such as air pollution.

The combustion of fossil fuels usually causes hazardous levels of fine particulate matter and nitrogen dioxide in the air we breathe. Research shows that air pollution from fossil fuels cost the world $2.9 trillion in health and economic expenses in 2018, roughly $8 billion per day.

And so switching to renewable energy sources like wind and solar power helps address climate change, air pollution, and health.

Renewable energy is the cheapest power source in most parts of the world, and the prices for renewable energy technology are rapidly dropping. Statistics show that between 2010 and 2020, the cost of solar-powered electricity was reduced by 85%. The cost of onshore and offshore wind energy costs dropped by 56% and 48%, respectively.

By 2030, cheap renewable power will provide 65% of the world’s total electrical supply. Besides, it has the potential to decarbonize 90% of the electricity industry by 2050, significantly reducing carbon emissions and helping in climate change mitigation.

Solar and wind power costs are likely higher in 2022 and 2023 than pre-pandemic levels because of the raised commodity and freight prices. However, the International Energy Agency reports that their competitiveness has improved because of far sharper rises in gas and coal prices.

Almost 80% of the world’s population lives in countries that are net importers of fossil fuels; about 6 billion people rely on fossil fuels imported from other countries, rendering them vulnerable to geopolitical shocks and crises.

Conversely, renewable energy sources are available in every country, and their full potential has yet to be realized. According to the International Renewable Energy Agency (IRENA), renewable energy will provide 90% of the world’s power by 2050.

Furthermore, renewables can help nations diversify their economies and protect themselves from the volatile price swings of fossil fuels, all while fostering inclusive economic development, new jobs, and poverty reduction.

In 2020, around $5.9 trillion was spent on supporting the fossil fuel sector, including tax breaks, explicit subsidies, and health and environmental damages that weren’t factored into the cost of fossil fuels. On the other hand, investing in renewable energy require about $4 trillion a year, including expenditures in technology and infrastructure.

Every buck invested in renewables generates three times more employment than a buck invested in fossil fuels. According to the IEA, the transition to net-zero emissions will result in an overall increase in energy sector employment. Conversely, roughly 5 million jobs in fossil fuel production might be lost by 2030, while an estimated 14 million new jobs in clean energy will be created.

Furthermore, energy-related businesses would require an additional 16 million employees. For example, to take on new jobs in manufacturing hyper-efficient appliances, electric vehicles, and innovative technologies such as hydrogen. By 2030, more than 30 million jobs in clean energy, efficiency, and low-emissions technologies might be generated.

In the United States and almost every region, when wind or solar panels energy is available, it displaces energy generated by natural gas or coal-fired plants. The energy type displaced by renewable energy is determined by the time of day and the power supply mix to the grid.

Numerous studies have demonstrated that when wind and solar production replaces fossil energy, renewable energy cuts CO2 emissions. For instance, according to research by NREL, producing 35% of power from wind and solar in the western United States would lower CO2 emissions by 25-45%.

In recent years, solar and wind farms have dominated new power plant construction in the United States. In contrast, fossil fuel plants, notably coal-fired ones, have been decommissioned at an unprecedented rate.

Most energy sector specialists believe we should adopt clean, renewable energy resources, but few want us to continue using fossil fuels. However, those who are for renewable energy transition acknowledge that our planet has to reduce excess greenhouse gases emission in our atmosphere, which starts by boosting the use of sustainable energy and lowering the usage of fossil fuels.

This isn’t the type of tip most of us like to read, but that makes it more important. Using less energy benefits the environment, especially as the shift from fossil fuels to renewables continues. Reducing fossil fuel consumption lowers the carbon footprint and improves the earth’s future.

Yes, we recognize that we still require power and gas to keep the globe running. However, we are not advocating a return to pseudo-pastoralism. Instead, we’re urging you to be more cautious about the type of energy you do consume and how you use it.

As a result, we will continue to require more energy to power the world, so we must increase the quantity of electricity generated from sustainable sources. Yes, output has improved year after year for numerous years, but it still needs to be at a level where we can meet everyone’s requirements.

It’s called global warming for a reason, which means no single country has all the answers, and no single country should carry the brunt of the blame. Conferences, such as the 2016 United Nations Framework Convention on Climate Change in Paris, are an excellent place to start. Still, there must be a coordinated follow-up that focuses on holistic initiatives.

As solar power enthusiasts will tell you, the earth receives enough solar energy daily to satisfy the energy supply demands outlined in increasing current output levels. The issue is that we can only use some of that energy with our current technologies.

The most significant barrier now is a shortage of high-capacity and long-storage batteries. Because the sun does not shine continuously and the wind seldom blows, we need better techniques to store energy for use after the sun has set and the wind is calm.

The four R’s of green living are critical to achieving success with reducing consumption in your home. Also, they should be applied to how the renewable energy sector moves ahead. These specific stages are as follows:

Sustainable energy supporters should also be practitioners. Because you sign up for an electricity plan powered entirely by solar energy doesn’t mean you can ignore other measures to protect the environment.

How Does a Solar Panel Energy Work?

Solar panels usually use sunlight as a source of energy by converting it into direct current (DC) electricity, which is then converted into alternating current (AC) to power household appliances such as lamps, air conditioners, and even solar-powered security cameras. Besides, excess electricity generated by solar systems can be sold back to the public utility power grid on extremely sunny days.

Any electricity generated by the solar panel system that you do not need is sent to battery storage or the electric grid. Note that a solar system usually works best when the most light hits the cells.