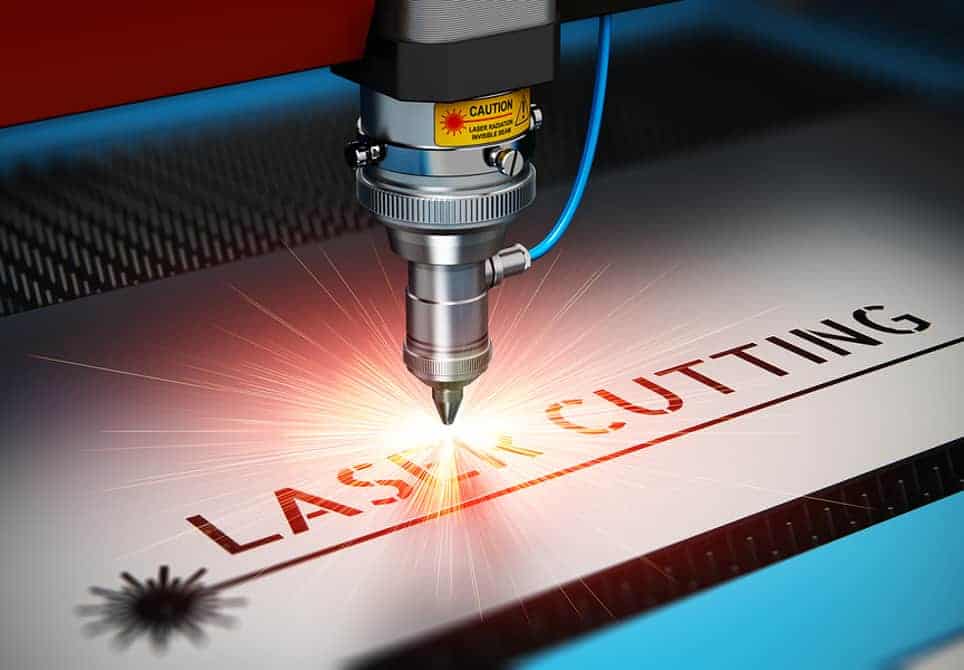 by Brenda Nyawara
Updated on 10 November 2022

Laser cutting technology has advanced significantly since its invention. Laser cutters, on the other hand, are now more powerful and affordable than before, making them available to even hobby users. For instance, a designer can create anything in design software and then send it to laser machines to be carved out automatically with the press of a button. But how do laser cutters work?

What is a Laser Cutter?

This is a Computer Numerical Controlled (CNC) machine that vaporizes materials using a laser, resulting in a cut edge. Though it was originally designed for industrial manufacturing, it’s now used by small enterprises, architects, schools, and hobbyists.

The Laser cutting machines guide the output of a high-power laser, most frequently through optics. Besides, laser optics and CNC (computer numerical control) are used to direct the laser beam to the material. For example, a commercial cutting laser uses a motion control system to execute a G-code or CNC of the pattern to be cut onto the material.

Furthermore, the focused laser beam is directed to the material, which either melts, vaporizes, burns, or is blown by a jet of gas, leaving an edge with a superior surface finish. On the other hand, laser cutting for metals is more precise than plasma cutting.

Now that we know what a laser cutter is let’s check out how it works.

How Do Laser Cutters Work

Then, the beam is directed at the material and can cut the raw stock. The cutting head is often installed on an XY gantry, a mechanical system powered by a chain or belt that allows the cutting head to move precisely within a defined rectangular area the size of the work bed.

Furthermore, the XY gantry allows the laser head to move forward and back, back and forth across the material surface, allowing it to make accurate cuts anywhere on the bed. The focus point of the lens must be on the material surface being cut through for the laser to cut. All laser cutters require a focusing technique to ensure that the laser cuts effectively.

When the laser beam gets into contact with the surface, the workpiece material usually absorbs and converts it into heat energy. Then, the heat energy raises the temperature of the material until it melts and vaporizes. There are three laser cutting processes depending on the auxiliary gas used.

In this flame-cutting process (also known as reactive cutting), the auxiliary gas (oxygen) actively participates in the burning and melting of the material. The laser beam usually heats the material while the oxygen reacts with it to generate a fire. This boosts the energy input to the material and helps the laser beam cut through it.

In fusion cutting (also referred to as melt and blow cutting), the auxiliary gas doesn’t help to melt the material but only comes into play after the laser has melted it. Generally, an inert gas (nitrogen) is used as auxiliary gas to help in the cutting process.

The pressurized auxiliary gas usually blasts the molten metal out of the kerf, boosting cutting speed and minimizing the amount of laser power needed to cut through the material.

What Are the Main Types of Laser?

A CO2 laser is a glass tube containing a gaseous combination of carbon dioxide, nitrogen, hydrogen, and helium. A high-voltage electric current is usually passed through the glass tube that stimulates the atoms of these gases.

A fiber laser [also referred to as a solid-state laser (DPSSL)] uses a semiconductor diode to emit light. The light produced by the diode gets into the core fiber, doped with a rare-earth element (erbium, ytterbium, or thulium). Besides, these rare-earth components absorb the light and convert it into the required wavelength laser of 950 nm – 2200 nm).

This solid-state laser that directly uses the light generated by a semiconductor diode without a doping medium. This laser is mainly used in low-cost laser engravers with low laser-power output and can cut and engrave thin sheets of materials. However, recent advancements have made it possible to have high-power diode laser cutters that can cut through dense materials.