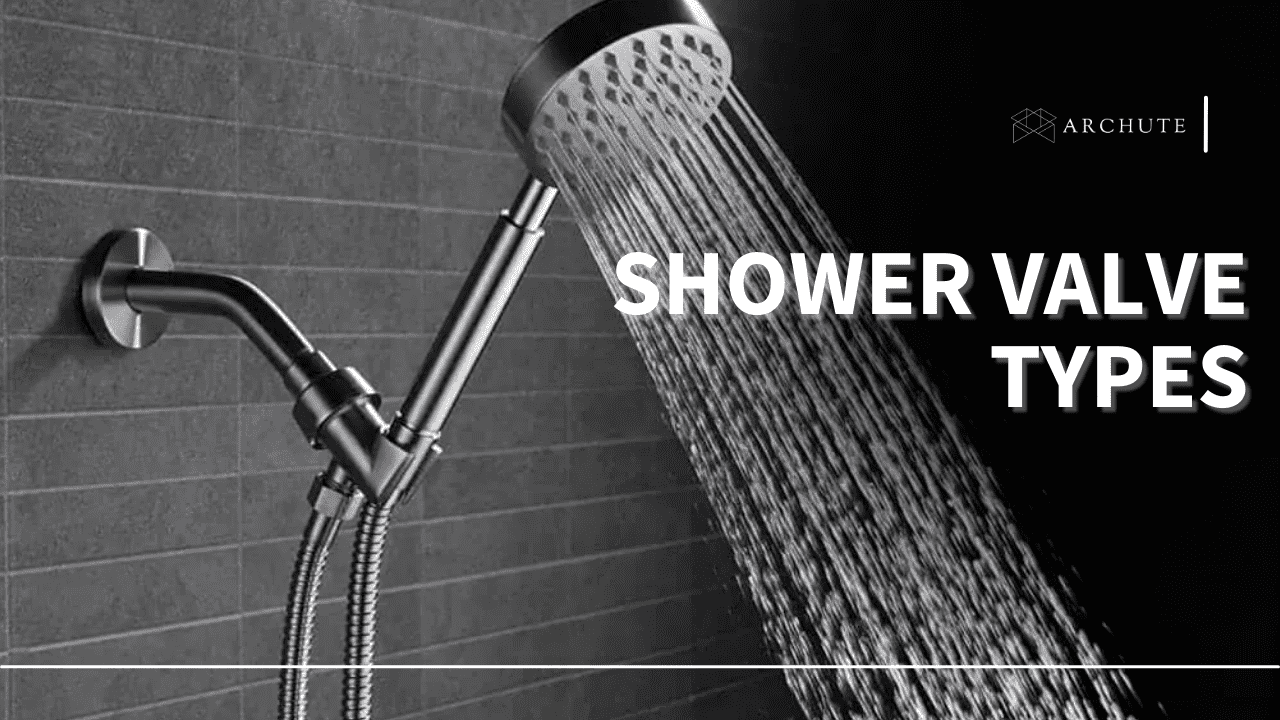 Shower Valve Types: How to Choose the Right Valve

Do you know what differentiates a shower that turns water boiling after a toilet flush and one that maintains its temperature when using another water fixture? The type of shower valve you use, of course!

That said, here’s what you should know when choosing the right shower valve types, whether for a shower remodel or replacement.

What Is a Shower Valve?

A shower valve is a plumbing fixture that regulates water flow to a shower head. It is usually installed directly into the shower wall and is connected to the hot and cold water pipes.

Consequently, it typically has two handles that control the temperature and flow of the water. Additionally, it turns the showerhead and faucets on and off. Notably, there are many different shower valve types on the market, so choosing the right one is crucial.

Unlike other shower valves, its trims have two separate handles operating like a standard two-handle faucet. You only need to turn the left handle for hot water and the right one for cold water. As you turn on the water, water from the two outlets will mix in a ratio dependent on which one you open more to achieve the desired temperature.

This type of valve is quite easy to use. However, it’s important to note that it does not include an anti-scald function. This means there’s no built-in mechanism to keep the water from becoming excessively hot if there is a rapid lack of cold water.

Thermostatic valves use a thermostat to detect incoming water and maintain the most precise temperature during your showering session. They are designed to maintain constant water temperatures, even if the water pressure changes.

Since a thermostatic shower valve’s primary purpose is to maintain temperature, it doesn’t regulate water flow; instead, it is controlled by a different component known as the volume control valve.

Thermostatic shower valves are commonly used in custom showers with several shower outlets. For example, consider a master shower with a showerhead, body jets, a hand shower, and maybe an overhead rain showerhead. You can activate each outlet individually or at once in these applications, eliminating the requirement for a diverter to switch back and forth.

A pressure-balancing shower valve (a mechanical valve, shower pressure valve, or anti-scald valve) provides consistent water pressure in your shower even when the water temperature fluctuates. This can be handy if you have many showers in your house that are used at different times. Like the hot and cold valves, it regulates flow and temperature using the hot-to-cold water volume ratio.

The unit is quite handy and effective. For instance, if you flush the toilet while another person is in the shower, this shower valve type ensures the shower pressure doesn’t fluctuate. Besides, it is perfect for 1-2 faucets.

The pressure balancing valve usually uses several pistons and diaphragms to detect water pressure changes from hot and cold water lines and then restrict one side to help maintain a consistent water temperature. Conversely, the main drawback is that this shower valve can be more costly than other types.

A volume control valve is used to turn the shower on and off and control the amount of water that flows from an outlet. It’s only compatible with thermostatic shower valves and can’t be used with any other type. Besides, each volume control valve is designed to regulate one outlet at a time. The only way to regulate many outlets is by pairing it with a diverter valve.

The number of outlets the diverter can direct to is limited—two outlets for a two-way and three for a three-way. Therefore, to use four outlets, one extra control would be required. The ideal practice, however, is to use four separate volume controls and regulate them separately.

The diverter valve (also known as the transfer valve) is an in-wall type that allows you to re-direct water from one output to another. It usually doesn’t control the temperature and cannot turn the water supply on and off. On the other hand, it can be a separate valve in the wall or an integrated component of the main valve.

The water flow is transferred by turning off the supply from the currently open one and connecting it to a nearby outlet. Besides, some diverter valves allow water to flow to two outlets simultaneously, though the water flow is restricted since it is divided between two components, unlike volume controls.

Diverter valves come in different types. The two-valve diverter and three-valve diverter are the most common ones. Some diverter valves, however, can be integrated into an existing main shower valve. Conversely, there are alternatives to using an in-wall diverter to divert the water (i.e., Shower Arm Diverters, Tub Spout diverters).

The shower mixing valve is one of the earliest types of shower valves and is most common in older homes. This shower valve mixes cold and hot water to get the perfect temperature from the faucets before delivering it to the showerhead.

However, since this shower valve type does not control unexpected pressure variations, there is a risk of scalding if the cold water pressure lowers. And so, it is no longer authorized in new buildings where the risk exists. Another issue with this unit is keeping the water temperature stable. If another person flushes the toilet or uses a tap, the water may momentarily become extremely cold or hot.

Additionally, you must manually set the temperature each time you want to use the water because there is no option to preset the temperature. If you already have a mixing valve, then a pressure-balancing valve, or even a thermostatic valve might be a worthwhile update. But first, ensure that your plumbing is sturdy enough to withstand the additions.

Like the diverter valve, the transfer valve is among the most current shower valves designed to meet market demands. This valve will provide water to several outlets simultaneously. This is handy, especially if you have a shower and a tub in your bathroom and want to use them concurrently.

The latest models of these shower valve types have digital control with various programs and functions, so you don’t have to control temperature and pressure with knobs.

How to Choose Between Shower Valve Types

When looking for the right types of shower valves, it is critical to understand the various connection types.

A copper connection means the plumber must solder the copper line directly into the shower valve.

Iron Pipe Straight connections (also referred to as 1/2″ NPT connections) are threaded connections on the shower valve that the plumber would attach an adapter to before soldering the copper pipe into the adapter.

PEX tubing is a plastic tube preferred by most homeowners to copper because of its flexibility, corrosion resistance, scale resistance, and ease of installation; no soldering is needed. As a result, copper pipes are being phased out in new construction in preference to PEX pipes.

These are just a few types of connections, so it’s crucial to consult a plumber before going shower valve shopping.

2. The Number of Connection Ports

For instance, if you want to install a rain shower and a hand shower head, you’ll need a shower valve with at least three connection ports.

Consider whether you prefer a concealed or exposed valve when choosing shower types. Concealed valves are usually installed inside the wall and are thus not visible. Though this can give your shower a more finished look, it can make repairs more difficult if the valve is broken.

Conversely, exposed valves are installed outside the wall, where they can be seen. This makes them easier to repair, though they may not seem as polished.

Shower valve bodies are classified into two categories: sweat (soldered) and threaded connections. The key difference between these two versions is their connection to the water pipes.

Though considering the check/service stops is a personal preference, they are quite handy features, especially if you live in an apartment. They allow you to switch off the water to the valve so you can fix it without turning off the main water supply.

If you live in a building with other residents, this could mean that you have to turn off the water to the building before you can repair your valve, which will take some time to obtain approval from the building’s superintendent.

Besides, even if you only live in a single-family house, these check/service stops allow you to work on the valve while your washer is still running.

Pay attention to the shower valve brand so that if you ever have a problem, such as a leaking shower valve, purchasing from a national brand with a reputable customer care service will save you a lot of trouble. Besides, repair parts will be easy to get a hold of at your local hardware shop if you need them quickly.

Otherwise, repair parts for off-brand products may be difficult to find. And when it comes to shower valves installed in your wall, you might need to open up the wall to get rid of the entire broken shower valve, all because you couldn’t find replacement parts.

To determine the manufacturer of your existing valve, look for a logo or letter on the trim plate, for instance, M for Moen, and K for Kohler, although some companies have their complete name on their trim.

Moreover, some shower valves within each brand may require a specific type of trim, so check the manufacturer as well as the type of faucet you have or want.