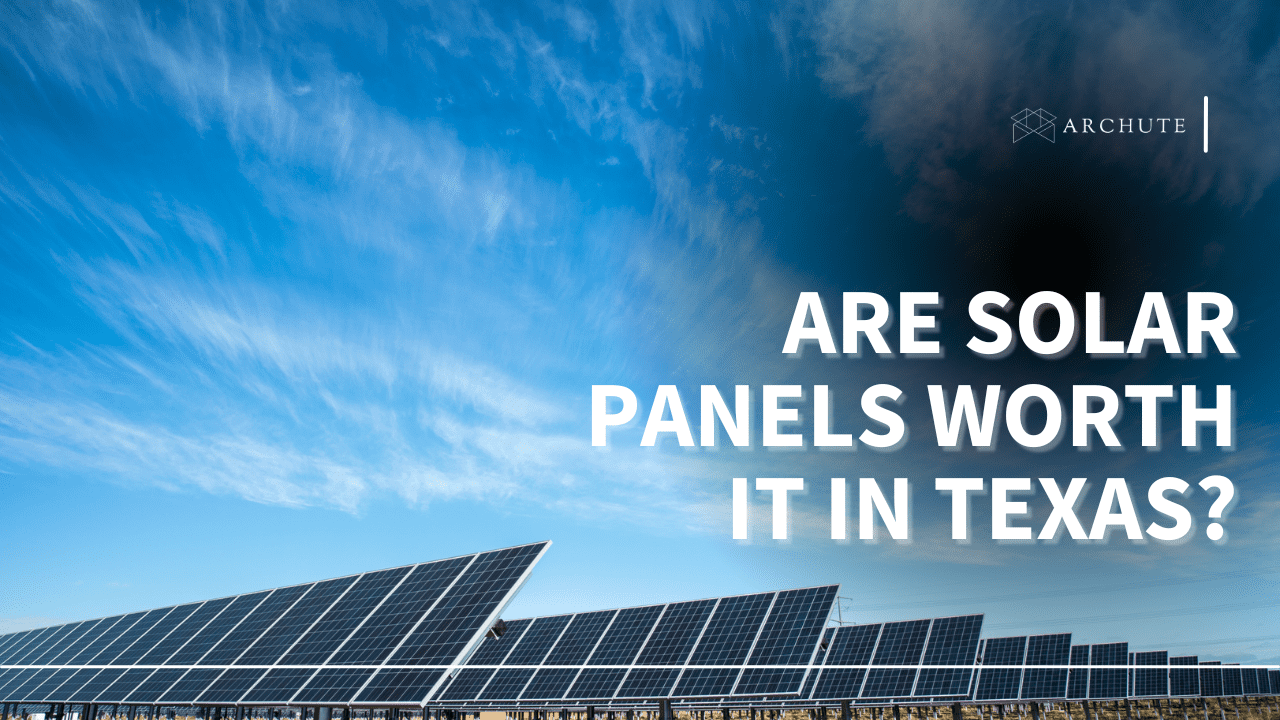 Are Solar Panels Worth It in Texas?

The United States has made major progress toward adopting solar energy. You may have noticed an increase in the installation of solar panels on homes as you drive around the Texas neighborhood. But you might wonder, “Are solar panels worth it in Texas?”

With its sunny and mild environment and competitive solar tax incentives, Texas is a promising market for solar energy. While solar panels have many advantages, they don’t always work for everyone. We’ll review the factors to consider so you can make an informed decision before installing them in Texas.

Is It Worth to Go Solar in Texas?

Solar energy is usually a good investment in Texas. The Federal Solar Tax Rebate, a state renewable energy property tax exemption, and favorable electricity buyback prices all contribute to Texas’s favorable environment for solar energy installations. As a result, there is usually a return on investment for a solar system purchase after 12.6 years.

Not only will this system save you money on your power bill, but it will also make the world a cleaner and healthier place by eliminating the need to burn natural gas or coal as fuel.

Although solar panel installation is popular in Texas, not all Texans will benefit from going solar. Therefore, you should evaluate your property and consult a reliable solar contractor to determine if installing solar panels would be beneficial and cost-effective.

Here are a few factors to consider when determining whether solar panels are a good fit for your home.

Your energy needs are the primary factor in determining the size of your solar panel system, which also heavily influences your panels’ value. Solar panels often pay for themselves by lowering or eliminating energy costs, making them a worthwhile investment for homeowners whose annual energy use exceeds 500-kilowatt hours.

The average home in Texas uses 1,132 kWh per month, ranking seventh in the nation for homes with high energy consumption. While there are additional elements to consider, most families will profit from installing solar panels in terms of energy consumption.

Due to Texas’ relatively high energy costs, most houses will benefit even more from solar conversion. In addition, you may find out how much energy you typically use on your previous electric bills.

The average cost per watt in Texas is $2.69, which is used to calculate the cost of solar power installations there. After accounting for the 30% federal tax credit, most Texans pay about $21,654, with an average system size needed of 11.5 kW to offset electricity consumption.

Although the initial cost may appear excessive, the value of solar panels is comparable to the cost of your monthly energy bill. Texas’s average monthly energy cost is $132.59, which is more than the national average and the bills in nearly all other states. As a result, most Texas homeowners can save money and receive substantial benefits from solar panels.

A solar calculator can help you determine the cost-effectiveness of installing solar panels. But, of course, the better solar is for your home, the shorter the period. In the long run, you’ll probably still receive a return if your repayment period is more than 16 years, but it will take longer, and your overall savings will be less.

Most states provide some sort of energy buyback or net metering scheme. These are often enforced on the state level and allow you to make up for the cost of energy drawn from the grid by producing more than you need and selling the excess to your electricity provider in exchange for a credit on your bill.

However, several of the larger utility providers in the state of Texas operate their net metering systems. The availability of net metering in Texas isn’t a deal-breaker, but it certainly helps, and if you don’t have access to this benefit, your return on investment will be reduced.

If your utility provider does not support net metering, you may want to look into installing a solar battery system to store excess energy produced by your panels.

Solar panels function best towards the equator to maximize their potential, where there is an abundance of both indirect and direct sunlight. Texas is one of the states in the US with the highest sun intensity.

Overall, the state has an average of 204 sunny days each year, which is close enough to the national average to make the investment in solar panels worthwhile. Tornadoes are common in northern Texas, although severe thunderstorms and hurricanes can strike anywhere in the state.

Although the weather isn’t usually a problem for solar installations, some homeowners may want to purchase panels with a long guarantee just in case.

Cloudy days and storms will reduce the panels’ efficiency, but the abundance of sunlight throughout the year makes them worthwhile. Rain can also help keep your panels clean of dirt and debris, which can otherwise reduce solar panel efficiency.

Benefits of Solar Panels in Texas

In contrast to fossil fuels, which are finite and produce harmful pollutants, solar energy is nearly endless and pollution-free.

Solar panels can generate electricity from sunshine and power electronics like televisions, computers, and cars. Solar energy can even be used to generate steam or heat water.

While the up-front cost of installing solar panels in Texas could be higher than that of more conventional energy options, doing so would prove to be a sensible investment in the long run due to the money saved and the environmental benefits gained.

Since you will be producing and consuming your electricity, your monthly electric expenses will decrease. A malfunctioning solar energy system or other cause could be to blame for a persistently high power bill despite installing such a system at your residence.

Since solar panels are not plugged into a conventional power grid, they will continue to produce electricity even if the power goes off.

Texas has some of the highest US electricity prices, and the solar panels installed can drastically reduce lower monthly costs. Additionally, this state provides a range of financial incentives for solar panel installation.

Net metering is considered one of the best solar incentives in Texas and many other states. The agreement is between utility customers and the companies that supply their electricity.

Net metering in Texas allows customers who generate their electricity from renewable sources to obtain a credit on their electric bill for the surplus power they create because the state’s infrastructure is unregulated. The customer can use this credit to reduce the future electricity price.

As of the end of 2022, homeowners can claim a credit equal to 26% of the cost of installing solar panels thanks to the federal solar tax credit (Investment Tax Credit or ITC).

There will be a 23% incentive in 2023 for those who choose to install solar panels. There is no restriction on whether or not the home is brand new or pre-owned when applying for financing.

There are currently no statewide solar credits or incentives available in Texas. In Texas, there are no general solar buyback programs either. Nevertheless, many local governments provide some sort of incentive or grant for installing solar energy systems in homes and businesses.

Texas residents who put solar panels on their homes are eligible for a tax break equal to the solar system’s appraised value.

This exemption covers their purchase price and the price of installing solar panels for commercial and residential premises. It applies to new construction as well as retrofit projects.

With this legislation in place, HOAs cannot prohibit residents from installing solar panels on their property. This means that no Texas homeowner’s association rules can be used to restrict you from building a residential solar system.

Solar panels are the longest-lasting component of a solar installation, with most manufacturers offering a guarantee of 25-30 years. However, they will continue producing power for another fifty years or so. Unfortunately, annual electricity output has been declining at roughly 0.8% annually.

A product warranty comes with solar panels that guarantee the system’s production for a certain period. For example, ten years after reaching 90% capacity, production could drop to 80%, and twenty years after that, it could reach 70%.

Manufacturer warranties on the solar equipment you use with your panels provide additional peace of mind. You can get a replacement if the inverter malfunctions or stops working within the first five years of its expected lifespan.

Any solar power system’s inverter is probably its weakest point. However, panel-based microinverters and power optimizers substantially have longer lifespans of up to 25 years, making them more reliable long-term investments. In addition, their warranties are normally between 10 and 15 years.

Does Putting up Solar Panels Boost a Texas Home’s Value?

Homeowners who switched to solar energy in recent years have seen a healthy return on their initial investment.

Zillow reported that homes with solar panels sold for an average of $8,000 more than similar homes without solar panels in Texas, which is not bad considering the state’s median home price is under $200,000.

Changing over has numerous positive outcomes. Utility costs decrease, and a chance of future financial gain also exists. Rates have been rising consistently, on average, by 2.9% per year. Thus this may be considered a gain for both parties.

Putting money into solar panels is a great investment in Texas. With the rising cost of electricity and the frequent power outages, the correct solar power system will save you money in the long term and bring you comfort and peace of mind. This is because the state is a prime area for solar energy.