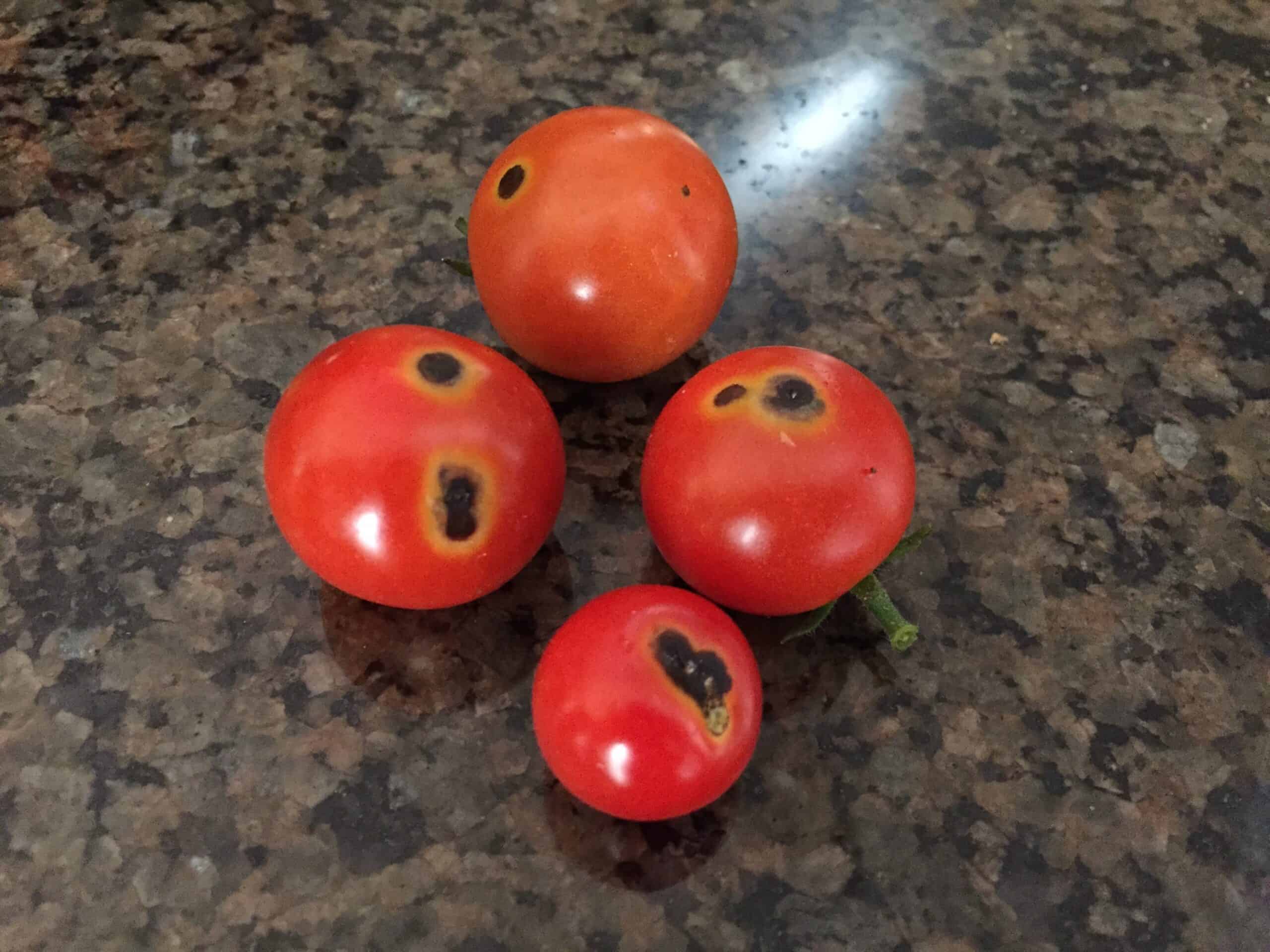 Should You Be Worried About the Black Spots on Tomatoes?

As you are slicing cherry tomatoes for a salad, you may come across a couple of black spots on tomatoes once in a while. Normally, the first question would be, “Are these safe to eat?”. As it turns out, you're not the only one asking.

This condition is called the Blossom end rot and is generally identified with a sunken black spot at the blossom end of tomato fruits. Blossom end rot is a relatively common garden problem and not a disease but rather a physiological disorder within the plant that is caused by a calcium imbalance. Tomatoes are massively grown every year and are among the favorite fruits or vegetables that most gardeners grow.

A tomato is a unique plant in several aspects; botanically, the tomato is classified as a fruit because its portion contains the reproductive means, its seeds. However, in 1893, the United States Supreme Court declared the tomato a vegetable for reasons that involved importing duties. So, now the tomato is either a fruit or a vegetable, depending on who's asking.

Table of Contents
Cause of the Black Spots on Tomatoes
1. Blossom End Rot
2. Anthracnose
Other Common Tomato Plant Diseases and Infections
3. Septoria Leaf Spot
4. Fusarium and Verticillium Wilt
5. Early Blight (Alternaria)
6. Late Blight
Prevention of Tomato Blossom End Rot
a) Soil pH Level
b) Using Fertilizer
c) Watering
d) Calcium
Controlling Tomato Diseases
Frequently Asked Questions on Black Spots on Tomatoes
1. Can you cure blossom end rot on tomatoes?
2. What is the best calcium for tomatoes?
3. Is it safe to eat tomatoes with blight?
4. Can overwatering tomato plants cause blossom end rot?
5. How to stop blossom end rot on your tomato plants?
6. Does Epsom salt work great for tomatoes?
7. How to know if you're overwatering tomatoes?
8. Should I water the tomatoes every day?

Cause of the Black Spots on Tomatoes

Sunken black spots on tomatoes are the classic symptoms of Blossom end rot, a fairly common problem that many tomato gardeners experience. Blossom end rot generally occurs when the tomato growing season starts a little wetter than optimum. You will slowly spot the rot appearing when your infected fruit is about half its normal full size.

Typically, vegetables and fruits such as tomatoes will need a healthy calcium intake to develop well in growth. The blossom end of the tomato fruit will slowly start to break down with the lack of calcium. The shortage of calcium may be caused by several factors such as low pH soil, moisture fluctuation, or when there's too much fertilizer.

Pests may not directly contribute to the Blossom end rot, but you certainly will want to prevent them from causing any further damage and take the appropriate steps in keeping them at bay. Common tomato pests may include caterpillars, slugs, and flies.

Black spots appearing on the skin of your tomatoes could be caused by Anthracnose, otherwise known as Colletotrichum coccodes. This is a fungal plant infection that may come up in wet warm weather. However, it is safe to eat the tomatoes as long as you cut out the infected section.

The fungi that cause this fungal infection survive through the winter by growing in dead twigs and fallen leaves. Wet weather creates the perfect condition for the spores of this fungal infection to spread. The dark spots are made up of dead cells, so they are usually soft and often sunken.

The fungal infection, Anthracnose, can infect both green and ripe tomatoes that grow in warmer temperatures, typically above 80°F (27°C), especially where it rains consecutively for several days. The growth of Colletotrichum coccodes is most rapid at temperatures that range between 55°-95°F.

These dark spots caused by the Anthracnose pathogen are tiny and aren't as easily identifiable on green tomatoes but develop rather quickly as the fruit ripens. On ripe fruits, the spot or lesion appears between five to six days.

This is a bumper crop that will reward you well when grown in the full sun with plenty of nutrients and moisture since these plants can be heavy feeders; they do best in rich soil that's been supplemented with fertilizer. But it's also almost inevitable that your plant will end up with a blemished fruit or fungal foliar disease. So here's what to look out for so you'll know what you are dealing with.

A fungal pathogen causes the Septoria leaf spots. The symptoms of Septoria disease are commonly observed on the leaves and include small, circular patches and spots with a grayish-white center with dark edges.

Additionally, Septoria disease may cause tiny black spots to also show up at the center of each blemish as the infected leaves turn yellow, wither, and finally fall off. Long periods of warm, wet weather favors the spread of Septoria disease, while splashing water further spreads the spores to other leaves.

Like Septoria, this is another fungal wilt disease brought about by fungal pathogens in the soil that enter a young plant through its young roots. Slowly they begin to block the vessels that pass moisture through the roots and stems of the plant. Because of lack of enough moisture, the plants will begin to wilt in sunny weather, although they might appear to recover at night.

Unlike Septoria, tomato wilt may appear first on the plant's top leaves, or lower ones at times, causing them to slowly lose their color, become yellow, and start dying back from their tips. This process continues slowly until the entire plant is affected.

Another tomato plant fungal disease is Alternaria, which causes early blight. Symptoms include having visible brown or black spots with dark edges on the lower leaves, almost like a target. Other symptoms include the stem ends of fruits having large, sunken black spots with concentric rings. This fungi disease usually appears after the plants have set fruit.

Late blight is a fast-spreading tomato plant disease that is caused by a fungus called Phytophthora infestans. It typically occurs during long periods of cool, rainy weather that may set at the end of the growth season. It can be easily confused with frost damage on leaves, which causes tiny irregular green-black blobs.

The brown spots and scars that appear on the fruits may be large, irregular, brown, and quickly become rotten. Other than the tomato fruit, this plant disease can also affect potatoes, which can also be transferred.

There may be no cure or way to salvage a tomato fruit that has been affected by Bottom-end rot, but here are a few steps that you could take to prevent the same on future tomatoes.

The soil pH shouldn't be too alkaline or too acidic. The optimal soil pH level is 6.2-6.8, where the soil condition enables the tomato fruit to take in more calcium.

Never overuse the fertilizer since too much nitrogen, especially early in the fruiting stage, may tie up calcium absorption in the soil.

The soil should always be evenly moist. One way to help you maintain an even level of moisture is to apply as much mulch at the base of the plant on top of your soil. Mulch will minimize the evaporation from the soil.

Generously apply calcium spray to the tomato plants as a preventive measure. You can make calcium sprays at home using calcium chloride or calcium nitrate. To do this, combine 4 tablespoons of either powder into a gallon of water. Put the calcium mix into a spray bottle and shake well before use.

When well mixed and ready, spray this calcium mixture on the leaves and stems of your tomato plant when the first bloom first appears in your tomato garden.

These are some of the most important ways to keep your tomato plants healthy. More importantly, since the common plant diseases and pests lurk in the soil, it's always a good idea to rotate where you plant your tomatoes, so they only grow on that same ground only after every four years or so. Diseases such as Septoria and other fungus diseases spread faster when the leaves are wet.

For this reason, you should avoid crowding your plants too close together. Spreading them out also helps air circulate better through the plants to help dry off the leaves faster. When watering, avoid splashing and aim most at the base of your tomato and, if possible, also minimize the splashing of water onto the leaves. Also, habitually water the leaves in the morning, so they have enough time to dry off before the cooler evening weather arrives.

Even as you follow all these best tomato growing practices, you're still likely to come across some diseases that pop up. Unfortunately, it's almost impossible to completely cure the plants with diseases caused by bacteria, fungi, and viruses once infected. However, if you are lucky to catch this early enough, you can slow down its spread by removing the leaves or whole plants showing all the right symptoms.

Also, try and prevent the pathogen from getting to and infecting your plants by regularly treating them using a specifically meant product for controlling diseases on vegetables. Products such as Bonide Liquid Copper or Dr. Earth Final Stop come in an easy-to-use spray bottle that's rated safe for use in most organic gardens.

1. Can you cure blossom end rot on tomatoes?

Sadly, if the tomatoes are already showing signs of blossom end rot, there's really not much you can do to 'cure' it. The small areas of damage can be sliced off to leave the rest of the fruit that you can use. Carefully remove any rotting part of the fruit as you see it since you want the plant's energy to only go into growing healthy tomatoes.

2. What is the best calcium for tomatoes?

Natural sources of calcium usually include crushed eggshells and shell meal (the ground shells of some marine animals). You can get these shell meals in some nurseries or particular garden stores.

3. Is it safe to eat tomatoes with blight?

Yes, overwatering plants can cause Blossom end rot in tomatoes. Overwatering plants usually will drown the roots, and when roots are drowned, they begin to rot. When the roots rot, the plants don't receive the nutrients they require, including calcium, to keep up with their overall health and growth.

5. How to stop blossom end rot on your tomato plants?

To preventing blossom-end rot, a soil test and apply lime and fertilizer as recommended. Also, use fertilizers that are low in nitrogen and high in superphosphate, with ratios 4-12-4 or 5-20-5 or close to that. This will be sure to reduce the chances of blossom-end rot.

Applying Epsom salt as a foliar spray or a drench soil works great for tomatoes. Using Epsom salt as a soil drench improves the overall health of the tomato plant by giving it a good dose of magnesium. When applied as a foliar, every 2 weeks, the Epsom salt spray for plants uses 1 or 2 tablespoons in a gallon of water for a boost.

7. How to know if you're overwatering tomatoes?

The early symptoms that show you are overwatering tomato plants include having cracked fruit and blisters or little nodes on their lower leaves. If you continue to overwater them, then the bumps on the leaves turn corky. Meanwhile, this may cause the roots to drown, rot or die, which usually reduces the amount of moisture and air that the green part of the plant receives.

8. Should I water the tomatoes every day?

Never let your newly planted tomatoes dry up. Instead, water them well to make sure that the soil is moist and ideal for growing. Early in the tomato growing season, plants are usually watered daily every morning. And as the temperatures rise, you might need to water the tomato plants twice every day. Generally, garden tomatoes will require 1-2 inches of water every week.