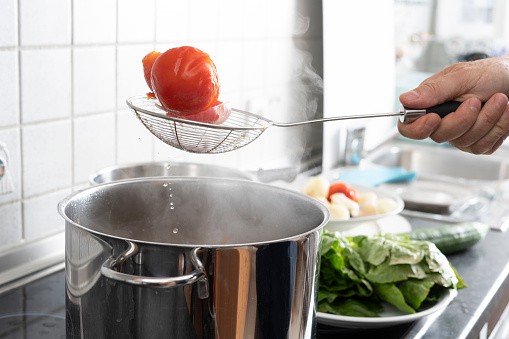 How To Blanch Tomatoes And Peel Like A Pro

Are you looking for a way to easily blanch and peel your tomatoes at home? Or do you want to master a tomato peeling technique that will make your work easier? Then, go through this article to know how to blanch tomatoes to make them easy to peel.

We all know that pieces of tomato floating on your food are not the most appealing sight, so in order to prepare tomatoes in making things like salsa, canning, sauces, and more, you will have to master this simple technique. Let's get started! 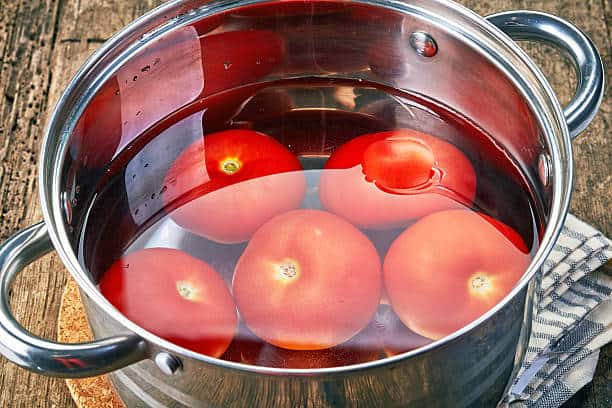 ripe tomatoes in a pot of water

Blanching is a short cooking process done to vegetables, meat, and fruits. A short explanation for blanching tomatoes is that the tomatoes are submerged in hot boiling water for a few seconds until they start cracking. Next, you take them out and submerge them into an ice water bath to stop the cooking process, then peel the skin off easily without burning your fingers.

It is more of a chemical process where you use water treatment for peel removal, it is a balance between hot and ice-cold water. For example, blanching tomatoes is better if you want to peel them easily without damaging the fruit pulp and interfering with the taste. It is beneficial since it slows down the enzymes that cause texture flavor and nutrients to deteriorate thus maintaining the original taste and freshness of the tomatoes.

How To Blanch Tomatoes 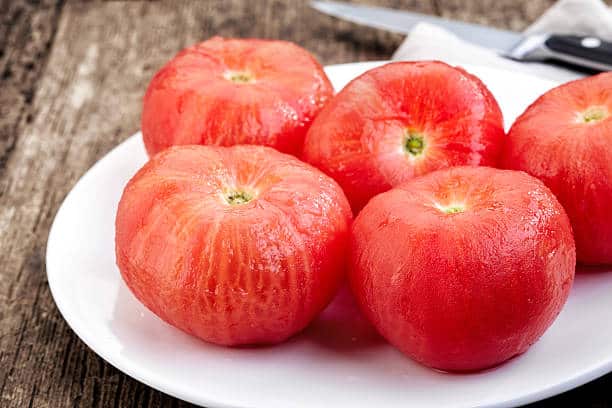 Blanching has an advantage to your cooking process since it maintains the original taste of the tomato. In addition, the tomato itself cooks for seconds and retains its firmness and redness while making the skin slip off easily.

Peeled tomatoes are great for making many dishes, making the food tasty and appealing. To blanch tomatoes successfully, use ripe but fresh tomatoes that can hold up to peeling. If your tomatoes have black spots, you can peel the black spots easily and use the rest of the tomato. Learn more on the causes and cure of blackspots on a tomato. In this case, Roma tomatoes will work well, but if you do not have the Roma tomatoes, you can try them with others, such as the early girl, Beefsteak or cherry tomatoes.

1. Gather the supplies that will be useful in blanching your tomatoes. You will need fresh summer tomatoes, tongs, a kitchen spider, a large slotted spoon, a sharp knife, ice water or cold water, and boiling water.

2. Start by removing the tomato leaves from the tomatoes if there are any. Tomato leaves are considered poisonous if consumed in large amounts. Secondly, wash your tomatoes and use a sharp knife to cut an x at the bottom of each tomato. 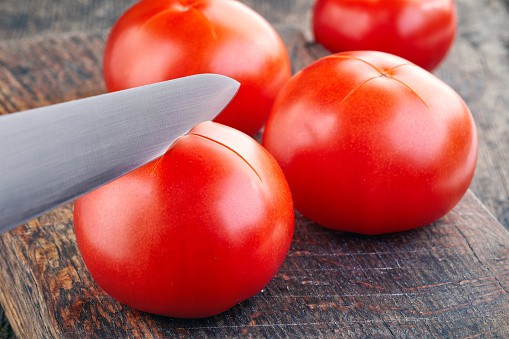 ripe tomatoes are prepared for blanching

3. Fill a medium-sized pan with water and bring it to boil over high heat, then prepare an ice water bath by filling a bowl with cold water and ice cubes. In the absence of ice cubes, you can use cold water instead.

4. Add the tomatoes to the boiling water and boil for 30 to 60 seconds. You should notice the skin bursting open from the x parts, and the tomatoes will start to peel up. At this point, the tomatoes are ready. We use a one-minute time frame to boil the tomatoes to loosen the skin and avoid cooking. If you cook the tomatoes for a longer period, they will not be able to hold their shape after peeling, plus they will lose their original taste.

5. Use a slotted spoon to transfer the boiled tomatoes to the ice water bath.

6. When the tomatoes are in the ice water bath, they can now peel off easily as the skin slips off. If you find one or two tomatoes with a tough skin or are hard to peel off, you can place them back into the boiling water and blanch them again.
Final Notes: After peeling your tomatoes, you can use them in your favorite sauces, making dishes such as salsa, and also in canning recipes. If you are interested in farming tomatoes, you can also extract the tomato seeds and use them for planting, learn more about when to plant your tomato seeds.

Frequently Asked Questions On How To Blanch Tomatoes

1. Can You Peel Tomatoes Without Blanching?

2. Are There Any Other Ways To Blanch Tomatoes Apart From Using Boiling Water

Yes, you can also blanch tomatoes using a microwave or the steam method. But these ways are not considered ideal for home cooking.

In most cases, steaming is used for commercial purposes since you need a lot of steam to blanch tomatoes.

Again, microwave blanching is not an effective method, and it consumes time. Thus it is considered not effective.

Tips And Tricks Of Blanching Tomatoes