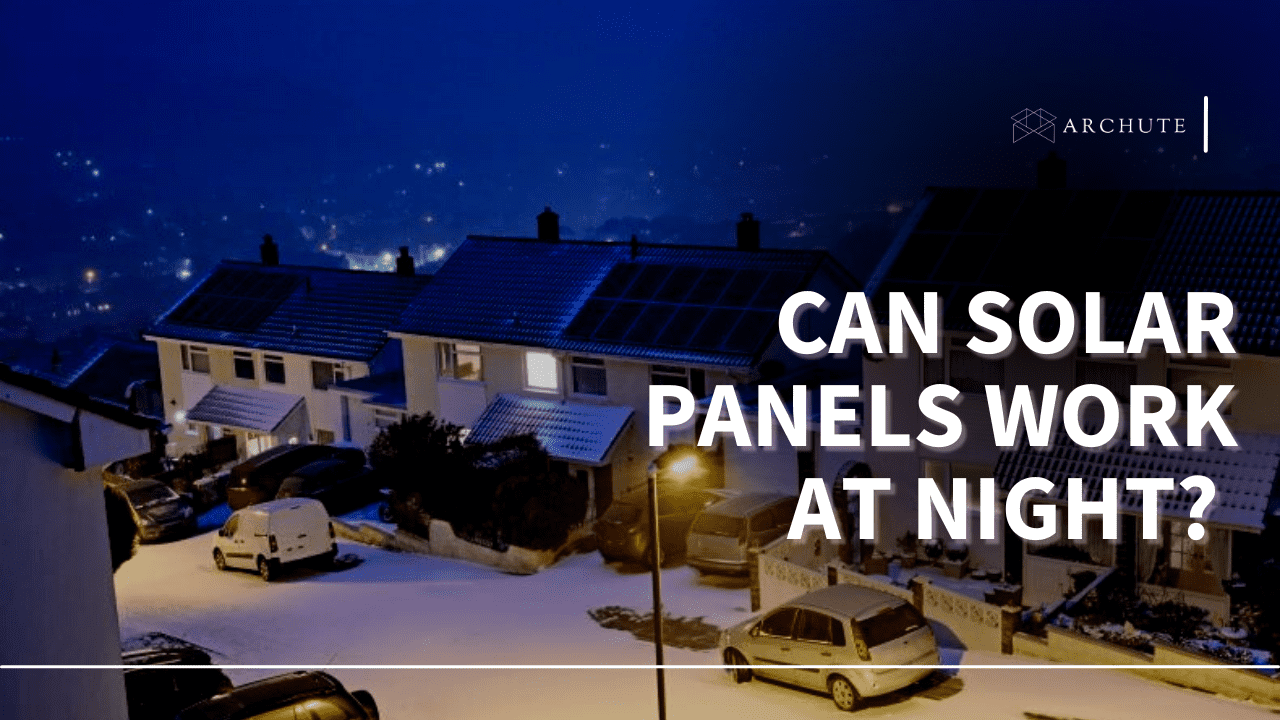 Can Solar Panels Work at Night? What About Cloudy Days?

Solar systems are not new, and their popularity is not slowing down anytime soon. However, some people are still unfamiliar with how they work. If you’re one of them, you can read more about how solar panels work here, but the big question is; can solar panels work at night? What about cloudy days?

How Does a Solar Panel Work?

Solar panels usually use sunlight as a source of energy by converting it into direct current (DC) electricity, which is then converted into alternating current (AC) to power household appliances such as lamps, air conditioners, and even solar-powered security cameras. Besides, excess electricity generated by solar systems can be sold back to the public utility power grid on extremely sunny days.

Any electricity generated by the solar panel system that you do not need is sent to battery storage or the electric grid. Note that a solar system usually works best when the most light hits the cells. This generates the most electricity. This begs the question, can solar panels work at night?

Can Solar Panels Work At Night?

Since there is often a moon at night, can solar panels work with moonlight? Again the answer is no. The moon does not ’emit’ light the same way as the sun does. Besides, the moonlight is simply the reflection of sunlight. On the other hand, moonlight does not have enough photons to activate solar panels’ photovoltaic effect. So, even if moonlight is bright, it cannot be used to generate solar energy.

The solar module’s operating time is anytime sunlight hits the surface of solar panels; it generates electrical energy. As a result, solar energy is only practical during the day.

How to Access Electricity At Night with Solar Panels?

When solar panel system is not producing electricity at night, there are two ways to access electricity to meet your energy requirement: solar battery storage and net metering.

The principle behind solar energy storage is easy. Most solar panels are designed to generate more electricity than you need in the daytime. So they store the excess power generated during the day on the battery storage. Then, when your solar panels are in sleep mode at night, they use the energy stored in the battery to power your home. Some homes or buildings can even run off-grid, meaning they are completely independent of the utility.

The net metering programs connect you to the power grid through a bi-directional meter. It monitors the flow of electricity in and out. As mentioned earlier, during the day, the solar power system usually generates more energy than you need, and the excess energy is sent into the electric grid. The utility reimburses the transferred energy with credits or payments applied to the electricity bill.

At night, or during cloudy weather when the solar system is not producing electrical energy, or when there is a power deficit, you may use the grid to power your household appliances. The electricity used from the grid will be deducted from the credits or electricity bill.

The net metering program allows for a continuous power supply connected to a residential solar system. In addition, it serves as a collective storage option for the energy generated by the solar power plant. With the help of a net-metering setup, it’s possible to keep power expenses to zero if there is plenty of sunlight throughout the day.

A peak sun hour equals one hour when solar irradiance delivers an average of 1000W (energy) per square meter.

Solar panel production potential is at its peak from 11 a.m- 4 p.m. on average. This is the time of day the sun is at its peak. And the capacity of your solar panel system to create electricity is determined by the intensity of the sun’s radiation. Therefore, it’s easy to understand why peak sun hours are important in choosing the ideal time of day for solar panels.

Understanding that peak solar hours are different from regular daylight hours is critical. These hours are only available between the previously indicated hours.

Have you ever considered the impact temperature could have on your solar panels? If not, you should be since the temperature affects solar panels and their capacity to generate electricity.

Solar panels not only become hotter when the temperature rises and sunlight increases, but they also create heat as a byproduct of absorbing sunlight. In case you did not know, not all the sunlight absorbed by solar panels is converted into electricity; some is transformed into heat.

With that said, can solar panel systems get too hot? The short answer is yes. Intense sunlight, hot climates, and the heat produced by solar panels absorbing sunlight and generating electricity can all cause your solar panels to reach temperatures that can reduce their performance.

Solar panels are usually made of photovoltaic solar cells, which convert sunlight into electricity. Though solar panels can generate power all day, they produce the most when sunlight directly hits them.

The electricity generated by your solar panels is thus determined by the availability and angle of this direct sunlight. The ideal time of day will offer your solar panels with perpendicular solar beams to the modules.

When the sun doesn’t come in from this angle, the panels will reflect it. Therefore note that the location and angle of your panels will directly impact the time of day they’re most effective.

Although your solar panels rely on sunlight to produce power, the lack of sunlight is manageable. If you have the know-how and the resources, you can plan and benefit from your solar panel system even when the weather isn’t working in your favor. Furthermore, solar storage technology is always evolving, with new alternatives, such as anti-solar cell panels becoming accessible to you, the consumer, each year. That means the future is brighter than before.

Frequently Asked Questions on Can Solar Panels Work at Night

Solar panels will perform at a lower efficiency on snowy days because of cloud coverage and less sunshine. However, snow on solar panels is typically not an issue because the dusting of snow is easily blown away by the wind.

2. How Can You Tell Whether Your Solar Panels are Working?

You can know if your panels are producing electricity by checking your meter. Green lights show that the solar panels are working properly. A red signal might indicate a decrease in solar panel performance resulting from a fault with the panels or the inverter.

Technically yes, your solar panels will still generate power even when the sun isn’t shining. However, you can only expect 15% to 20% of your system’s average energy production on cloudy days. Consequently, net metering programs and solar battery storage can be extremely handy even during the day. They eliminate the need to seek alternative energy sources due to a lack of sunlight.

4. What Are Anti-Solar Cells?

Jeremy Munday, a professor at UC Davis in the Department of Electrical and Computer Engineering, and a graduate student, Tristan Deppe, have developed advanced and innovative solar cells that work at night, the anti-solar cell.

5. How Many Solar Panels Do you Need to Power a Home?

However, it’s crucial to remember that the amount of electricity you require depends on your location and the type of solar panels. For instance, you can expect adequate electricity production with the best flexible solar panels.