Posted at 06:00h in Architecture by Samuel Nguma 1 Comment

At the heart of Beijing, four volumes coalesce to create an internal world of flowing open spaces – a reinterpretation of the classic Chinese courtyard that succeeds in imbuing an immersive and enveloping architectural experience. This new office, retail and entertainment complex designed by Zaha Hadid Architects, is dubbed Galaxy SOHO, and in keeping with the firm’s signature organic style, is devoid of corners or sudden transitions. The building is grandiose in scale, adapting itself to the monumentality of one of China’s great cities. To achieve a unified object, a series of bridges fuse the four major forms that adapt themselves outward, creating a fluid and panoramic architecture.

Galaxy Soho is a celebration of parametric design that is championed by ZHA’s Patrik Schumacher. In a nutshell, parametric design creates systematic, adaptive variation, continuous differentiation and dynamic figuration from the scale of urbanism to that of architecture. The design team was inspired by the great interior courts of Chinese antiquity and used this archetype to form the basis of their organisation principle. To sculpt the prominent forms of the complex, ZHA looked to the flowing terraced rice fields of China. And thus, nature meets architecture as large courtyards interact with what seems to be shifting plateaus to create a truly unique urban landscape.

Each of the volumes features its own atrium and circulation cores; but they merge at different levels to form the ensemble that provides outdoor plateaus and internal spaces with dramatic views. This is the icon of the project – that the architecture seems to unfold from below, above and subsequently into layers in all directions; all the while still adhering to the underlying logic of continuity and multi-level curvi-linearity. The canyon that is nestled amongst the sweeping curves overhead, interjected by graceful bridges, forms a grand open air thoroughfare that serves the surrounding shopping, café and entertainment spaces.

From the onset, the project was designed and planned to incorporate sustainable architectural strategies in pursuit of LEED certification. The complex offers bicycle storage as well as preferred parking for low-emitting and fuel-efficient vehicles so as to encourage residents to opt for green commuting. The incorporation of a cooled roofing system ensures that the effects of the resulting microclimate are minimised for the inhabitants. On the other hand, grey water recycling together with water efficient fixtures reduce the total water consumption by at least 20%. The complex also employs the use of highly efficient lighting fixtures, chillers and a double glazing exterior envelope that saves about 14% of the building’s energy consumption.

The 2013 RIBA nomination of Galaxy SOHO for the Lubetkin Prize was received with mixed reactions. The jury thought that the sinuous bands of aluminium and glass gave the complex an almost geological solidity and presence. They saw the development as a much needed democratisation of the firm’s work and were of the opinion that the ample courtyards and weaving interior streets demonstrated a rare generosity in a country determined to outdo the west in its sprawling commercialisation. However, some critics hurled scathing comments, with even the chief preservation boss accusing RIBA of applauding a project that has destroyed the city’s built heritage by violating a number of heritage preservation laws.

In an open letter to RIBA, the Beijing Cultural Heritage Protection Centre purported that the development had “caused great damage to the preservation of the old Beijing streetscape, the original urban plan, the traditional hutong and courtyard houses, the landscape formation, and the style and colour scheme of Beijing’s unique vernacular architecture.” ZHA was quick to respond to these allegations, claiming that they had worked closely with the Local Design Institute throughout the design process, to ensure that the project adhered to all government building regulations and planning requirements. In addition, they reiterated that there were no buildings on the site when they were first commissioned. With five years since the opening of Galaxy SOHO, the question still is: have the locals come to appreciate a project that was set to engender a confluence between the traditional urban fabric and contemporary living, into a seamless urban landscape? 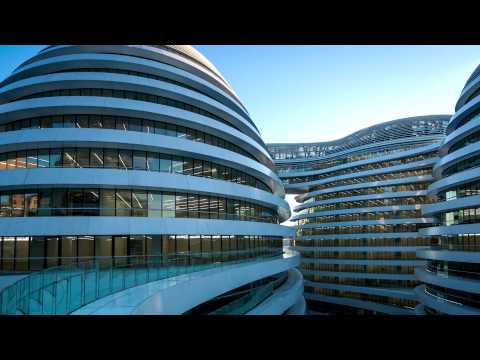