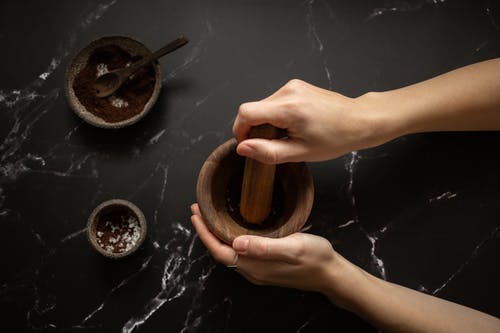 How To Grind Cinnamon Sticks To Fine Powder

If you like to grind your own spices, you might want to know how to grind cinnamon sticks. Cinnamon sticks may look challenging to work with, mainly because of their physique, but you will be glad to know that there are easy steps to follow to achieve cinnamon powder.

This article will discuss some easy methods you can apply at home to achieve perfectly ground cinnamon. All the methods will work for Ceylon cinnamon, Saigon cinnamon or Vietnamese cinnamon. However, before we discuss how to grind cinnamon sticks, let us overview what they are and their expected types.

What Are Cinnamon Sticks?

The most common types of cinnamon are the Ceylon cinnamon and its similar Cassia cinnamon. Is there a difference or any similarity between the two? Let us find out.

Cinnamon is one of the herbs that date back to cultural history. The original cinnamon sticks are also known as Ceylon cinnamon and are made from the rolled-up bark of the Cinnamomum verum tree. However, what you get in your local grocery stores is not the true cinnamon but rather the similar spice cassia popularly known as Chinese cinnamon.

Cassia sticks are ordinary since they are less nuanced and cheap than Ceylon cinnamon. Most chefs prefer the Ceylon cinnamon because of its strong flavour in most cooking. However, if you want a bold or brash flavor, you can use the cassia sticks.

Cinnamon offers excellent resources to the human body; the antioxidants in Ceylon cinnamon act against inflammation, thus helping your body fight illness. However, cassia cinnamon contains a compound called coumarin that, when ingested in large amounts, can cause problems. Let us now discuss how to grind cinnamon sticks.

How To Grind Cinnamon Sticks

When it comes to grinding cinnamon sticks to fine powder, you can venture into; electric grinders or manual grinders.

You can use coffee grinders or a dedicated spice grinder for electric grinders. When you choose to go the manual way, you will have the following options: use a mortar and pestle, a Microplane, a Ziploc bag, and a meat tenderizer.

As mentioned above, you can use manual grinders to get homemade cinnamon powder; let us detail these methods.

Using a Heavy Mortar And Pestle

This method requires a heavy mortar and pestle to tear easily through the cinnamon bark. Start by snapping the cinnamon stick into smaller pieces, then take the pestle and turn it circularly while pressing hard until the cinnamon sticks turn to a fine powder.

Using a Box Grater Or A Microplane

Apart from using a mortar and pestle, you can use the fine-grade side of a box grater or a Microplane to grind spices. A Microplane works similarly to a box grater, except it is a handy tool like a wand with sharper blades. When using the grating process, use the fine side to achieve well-ground cinnamon powder. However, consider investing in an electric spice grinder if you like grinding spices.

Using A Ziploc Bag And A Meat Tenderizer

If you want to grind your cinnamon manually but lack the tools mentioned earlier, it's time you improvise with a Ziploc bag and a meat tenderizer. Start by breaking up the large cinnamon bark into small pieces, then place them inside the Ziploc bag.

Next, take the meat tenderizer and crush the whole spices gently not to poke holes in the bag and spill cinnamon everywhere. Continue crushing the remaining sticks until they turn into a fine powder. This method is time-consuming; that is why we recommend using it when you are out of options.

If you want to go the easy way in grinding your spices, you need to purchase or own an electric grinder. Then, you either use a spice grinder or a coffee grinder. You can only use these two because they may not break up the cinnamon when you use other grinders, as their blades are not sharp enough to turn cinnamon sticks into powder.

If you don't have a spice grinder, you can also use an automatic coffee grinder. You can purchase an affordable coffee grinder and use it to grind other spices or make homemade cinnamon powder. You would not want to grind coffee beans with it again once you have dedicated it to grinding spices.

When using a coffee grinder, make sure it has an espresso setting to enable you to grind the sticks to be as fine as possible. You will eventually want to pulverize the remaining sticks into a spice blend.

Cinnamon is a spice used in cooking, extracted from a cinnamon tree. It has been used in cultural history as a form of medicine as a traditional healing system. It has a sweet taste that fits any dish you want to blend it in. You can use it to make tea, french toast, cook it into your food or add it to desserts.

Ground cinnamon offers a broad range of benefits when consumed directly or added to any food. Some people also chew the cinnamon stick a lollipop to aid them in health issues. Let us look into some health benefits of consuming cinnamon.

Cholesterol-Lowering: since cinnamon lowers glucose levels, it reduces unhealthy cholesterol levels in patients who take it daily. It improves your cardiovascular health.

Cancer-Fighting: Cinnamon extract can effectively hinder the growth of tumor cells and can also be used in treating tumors.

Frequently Asked Questions On How To Grind Cinnamon Sticks

1. Can You Use A Blender To Grind Cinnamon Sticks?

You can use a specific blender to bring your cinnamon sticks to a fine powder. If you have a blender that can make rice flour, it will be an exception as it can also grind the sticks to powder. You can also use a food processor to grind your own cinnamon.

However, a food processor can only be effective if its blade attachments are sharp and refined. While using a blender, take the sticks you want to use and put them in the blender without filling up the cup; this allows for some space to aid blending movement. Make sure your blender is a high speed, then pulse it to get your ground cinnamon.

Instead of blending your cinnamon sticks for pastries, you can add the cinnamon stick into boiling water and leave it to boil for 5 to 15 minutes before you let it simmer for half an hour. You can then add honey or caster sugar and reduce it till the solution is thick and dissolved. The result will be cinnamon syrup that you can add to your dough.

2. Where Can I Find Cinnamon Sticks?

You can find cinnamon sticks at your local grocery store, as they are pretty common. Most herbs in local stores are usually pre-ground or dry ingredients.

3. How Do I ReUse The Leftover Cinnamon Sticks?

Instead of storing the leftover cinnamon sticks, let us introduce to you this lovely cuppa tea recipe. Apart from being incredibly delicious, it has many health benefits, and it's simple to make. In many recipes, you can include cinnamon; toss one stick into boiling water and turn down the heat to simmer for about 15 minutes. Then, add in honey or sugar of your choice. If you want to add some flavor, you can ginger or milk.