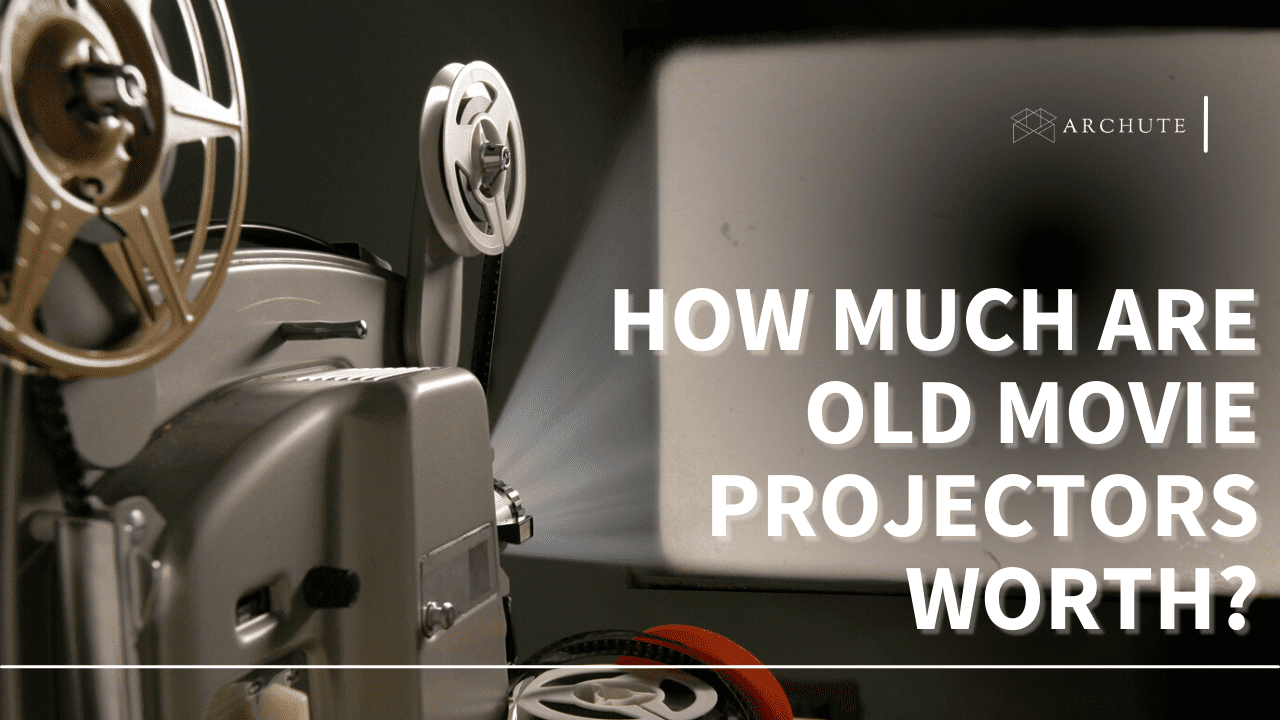 There has been a heated discussion on ” how much are old movie projectors worth?” However, the answer depends on the model, condition, and the projector’s age. An old movie projector can cost you a rough estimate from a few hundred to some thousand dollars.

You might wonder why you need to spend that much on an old movie projector, but if you understand their history and how they were a good investment in the 21st century, you will not question their price tags.

History of Old Projectors and Why You Need One

The first film projectors came into existence in the late 1800s. In 1891, Thomas Edison is key while discussing the history of film production; he created a kinetoscope that displayed moving pictures. He invented it for educational lectures, but soon it was used in film industries to watch movies.

These vintage movie projectors did not have a bulb but produced a brilliant light by jumping high voltage between carbon electrodes in an open carbon arc. In addition, the carbon arc had a strong fan that removed excessive heat and ozone while playing.

The vintage projectors filmed reels to bring back old awesome memories since photography and videography were not widespread. These reels caused nostalgia as they brought back strong memories.

The first sound movies were played in 1906, but the sound and pictures were not synced. Nowadays, you can use a vintage projector to display the main movie film, whereby the audience can not perceive 3D images. However, since you can upgrade to the best projectors for Halloween effects and decorations, the value of old vintage projectors is low.

How Much Are Old Movie Projectors?

Some people and companies also buy old movie projectors because of their appearance. If you get an attractive working model, it can be valuable and get you some decent money. Most projectors from 1920 and 1960 are more popular than the recent ones.

What Influences The Worth of Vintage Projectors?

You might wonder why people still purchase old movie projectors when digital ones are in the market.

People love old movie projectors because of their stylish antique appearance, keeping them in demand in the digital film era. Also, these projectors remain a treasure for collectors who like keeping artifacts. They then sell them to museums at a higher price.

Another aspect that influences the worth of vintage projectors is age; the older the model, the higher the price. So when you sell it to museums, you will get a good amount of money, but when you are having a yard sale, you will sell it at a lower price since someone might be collecting it for home entertainment.

The rarity of the old film projectors may also influence their worth. For instance, if the projector has been off the market for a long time, the price might go up since it is hard to find. On the other hand, if there is a lot in the market, the price is lower due to competition from other sellers.

Utility affects the worth of old projectors since a functional one is more precious than a damaged one. A damaged old projector may cost you less since you need to add the repair cost. On the other hand, a functional vintage projector has more worth since it can have a larger film size or the magic lantern that acts as a projector bulb.

An ancient item they add to their collection list is the movie and slide projector, which is more than a century old.

Some businesses and film companies like Hollywood buy old movie projectors and their films. However, since you may not see the importance of having an old film projector, you may sell it to them for less money.

The films will be valuable to you, especially when they have a loved one in them, but when you buy a package of old films at a yard sale, it may be worthless since you will watch memories of someone’s past.

Factors That May Affect The Price of a Vintage Film Projectors

You should conduct independent research before you buy an old movie projector. Background research of the product will help you avoid being over-charged as you will know the lifespan of the vintage movie projector and how much it is worth on different selling sites.

Before settling for a specific old film projector, you should familiarize yourself with other types and their functionalities. Also, ensure you know how to inspect a vintage movie projector for damages, as some sellers may take advantage of your lack of knowledge and sell you a damaged one. If you are going to sell or buy a vintage movie projector, you should have these factors in mind:

The brand of an old projector affects its worth since consumers trust specific brands for their quality. Expensive old movie projectors may include brands like Siemens, Kodak, Argus, and Graflex. If you buy lesser-known models, they may fail to work or have less value when reselling. Moreover, collectors pride themselves on getting known brands. Also, most sellers need help selling the lesser brands since customers are unwilling to buy them.

4. Your Knowledge In Projectors

The vendors determine the buying and selling price of any old projector. If you know projectors, you will have an easy time in the market since you’ll know what to look for. However, if some less reputable vendors find out that you don’t know anything about old projectors, they may take advantage of the opportunity and sell you a worthless projector.

To avoid such situations, you should research old movie projectors, their features, and their worth to avoid being scammed.

5. The Condition of The Projector

Most collectors are very keen on the condition of the old projectors since they wouldn’t want to invest in something useless.

1. Are old film reels worth anything?

The 8mm film is worth nothing since it is made of cheap plastic, but what matter is what’s inside. There is an increasing demand for old home movies as people are willing to spend a dime on old home movie footage.

You can get companies that want to buy your old home movie, but they pay extra if the videos are high quality. Hollywood buys these old reels to use as flashback scenes in their movies so that you can go for it.