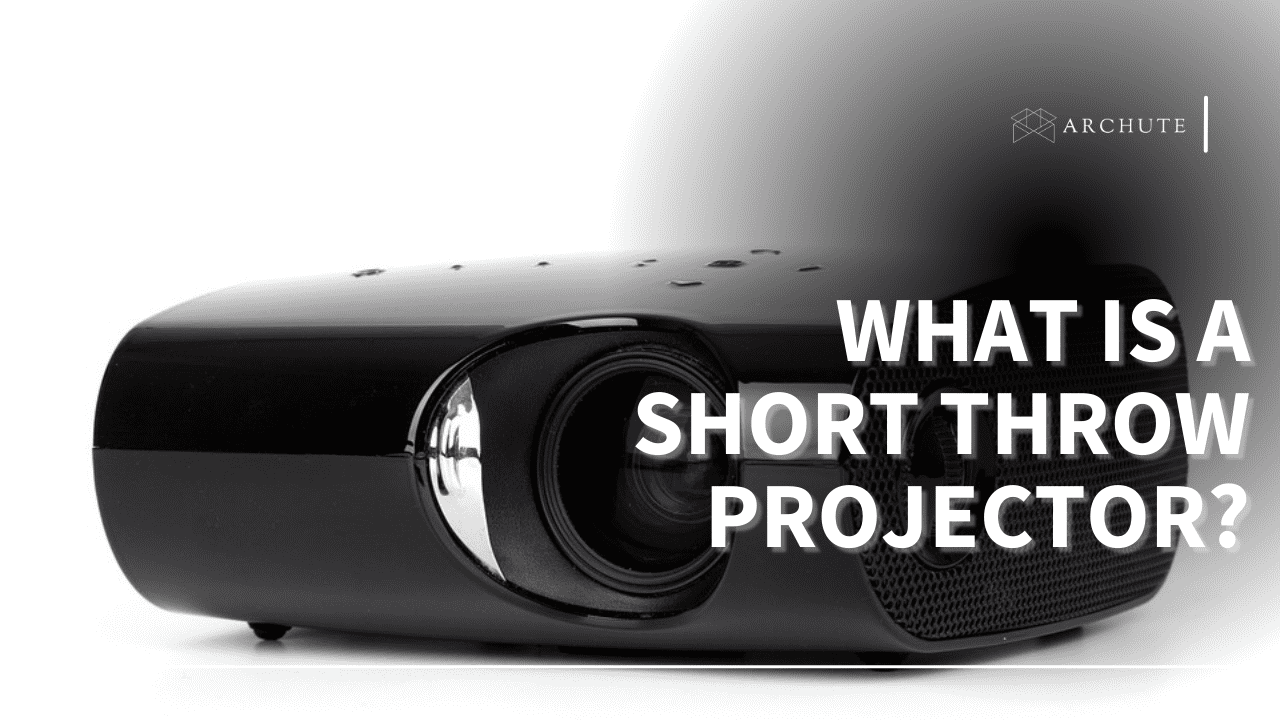 by Ian Mutuli
Updated on 5 December 2022

You may agree with me that if you want to replace your gaming or home cinema screen with something larger, a short-throw projector could be what you seek. It can provide a bigger display and deliver an immersive experience that you’ll grow to love. You may be wondering, “What is a short throw projector?” This article will tell you what it is and why you should get one.

What Is a Short-Throw Projector?

We need to compare types of gaming projectors to understand what is a short-throw projector. You can use three types of projectors for your gaming or home cinema needs. They include:

Let’s discuss each of them below.

A short-throw projector can cast a 100-inch image close to the display. This projector sits about three to nine feet from the wall. Plus, thanks to short-throw technology, you can have a standard rectangular image without distortion.

Short throw projectors feature a throw ratio of 0.4 to 1. If you take the projector back by a foot, the image cast will become wider by 1 to 2.5 feet. One advantage of short-throw projectors is that you don’t need a large room to use them since they can work short-distance.

Also called long-throw projectors, these feature a larger throw ratio allowing you to cast your image across a long distance of 8 to 10 feet. Unfortunately, the image’s width will be shorter than the distance between the projector and the screen.

A long-throw projector has a massive throw distance, making it a great choice if your screen is far from the power source. Also, you can use it outdoors and cast the display on an uneven surface without image distortion.

These projectors are more affordable than short-throw projectors since they don’t need advanced technology to present the image without distortion. The main downside to these projectors is that they cast shadows whenever someone passes within the throw distance.

You need abundant space and no placement restrictions to use this throw projector without obstructions.

Your last option is ultra-short throw projectors which can display a 100″ image from a mere 15″. These projectors feature advanced projector lens technology that allows them to throw large high-quality images from a close distance.

Since the projector sits close to the screen, it won’t cast unwanted shadows during films or games when someone passes by.

These models are popular for academic settings and business presentations, but as they become more affordable, you can expect to see them more in residential spaces.

How to Choose the Best Short-Throw Projector

There are multiple factors that determine the best short-throw projector for gaming, home cinema, or presentations. Nevertheless, there are some which are critical, and we’ll discuss them here.

The room where you’ll use the projector will determine the best option. The design of the space could help you choose a suitable place to mount your short-throw projector. Ideally, the projector should sit in a neutral location without high foot traffic to avoid issues like shadows.

The location of your power source also dictates where you’ll place the short-throw projector. You must also control natural light by closing curtains or placing the projector away from such places. This will help reduce glare on your screen, making it easier to see your images clearly.

The screen size you want is something else to consider when looking for a short-throw projector. To begin with, the height of your room’s ceiling will affect your screen size. You can determine your ideal screen height by subtracting three or four feet from your ceiling height.

Moreover, if the screen is close to the floor, it’ll be challenging to see the entire image clearly. A gaming short-throw projector strikes the perfect balance between the long and ultra-short models. Plus, it provides a sweet spot that allows you to customize your gaming experience to your liking.

The projector’s throw distance is closely connected to the available space. Throw distance means the distance between the image and the projector. This distance varies between ultra-short, short, and long-throw projectors.

Short throw distance is usually between 3 to 8 feet or barely over two meters. When it comes to gaming projectors, short-throw models are ideal because they can work well in smaller and confined spaces.

On the other hand, a long throw distance covers about 3 meters which can be great for outdoor spaces. Getting the best experience from a long-throw projector can be challenging if you don’t have a huge room.

On the other hand, a larger throw ratio means that you need a long distance to get a larger image size. Ultra-short throw projectors have the smallest ratio of less than 0.4, allowing you to place it under the screen for a stunning and large image size.

You also need to think about where you want to place the projector. Long-throw projectors traditionally sit on a shelf or desk, a distance away from the screen. Unfortunately, finding a suitable angle for long throw projectors can be challenging, so placing them on a flat, elevated surface is necessary.

Short-throw projectors are easily compatible with wall-mount projector brackets. These devices can help you set the projector on the ceiling or wall for the ultimate experience. Plus, they eliminate the need to reposition your projector every time you need to use it.

Short-throw projectors have several advantages that make them an excellent choice for gaming and watching movies and shows.

It’s no stretch to say that bigger is better regarding displays. That’s why we love to go to movie theaters to watch our favorite films. Similarly, big-picture format gaming provides a more immersive experience than what you get from a 50-inch screen.

The wider display lets you see everything better since these projectors can display different colors. If you are looking for a way to take your gaming experience to the next level, a short-throw, long-throw, or ultra-short-throw projector will do the trick.

Carrying a portable projector from one room to another is much easier than carrying your TV or monitor. Projectors provide the freedom that traditional screens don’t because you can quickly pack them into a bag and take them wherever you want to use them.

This means you can quickly transform any room into a recreational space for watching movies or playing games with your friends.

The average cost of a 50-inch TV screen is between $300 and $500. Projectors can cost anywhere from under $100 to ones under $200, to $500 on the higher end. Considering a projector’s advantages over a TV, for instance, a larger screen and portability, you’ll see buying a projector is more cost-effective.

A short-throw projector is an excellent pick if you tend to have friends around. Gaming with friends on a small screen isn’t as exciting as on a 100-inch projector screen.

After all, a projector is ideal for gaming with other people since it offers enough screen real estate to see everything without struggling.

You can easily customize your experience with a projector. Thanks to the portable nature of short-throw projectors, you can play around with them and place them in different areas of your room. This makes it convenient to watch films and play games according to your needs.