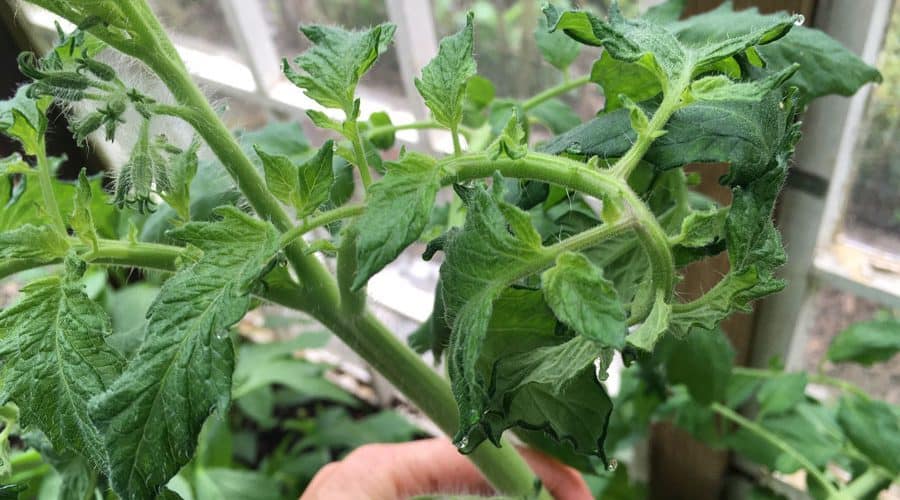 Posted at 16:24h in Garden by Jacky Chou 0 Comments

When you come across tomato plant leaves, you might be attempted to try them out by cooking them. But the big question is, are they poisonous to humans? Well, most people assume they are poisonous, but what does the research say? Would you ever try tomato leaves or add them to your kitchen? We will find out.

The tomato plant is initially from the Solanaceae family of plants informally known as the nightshade family. There are many genera that all contain alkaloids that can be toxic and non-toxic. Therefore it is commonly believed that the leaves are poisonous. But is that true or just an exaggerated myth that is managed to stick around, and we waste an incredible edible part of this plant? Let us explore the myths and decide whether the toxicity of tomatoes is a valid concern or this is an urban myth.

As mentioned early, the plant usually contains alkaloids. These are part of a plant’s defense mechanisms to protect it against certain insects, animals, bacteria, and fungi, and we consume them in various amounts daily. While it is true that some alkaloid compounds are not good for you, others can be good or even bad, depending on your view. Besides, though alkaloids are present in your everyday veggies, you could never consume enough of them in one meal for the alkaloids to be harmful.

So what gives with the leaves on tomato plants?

The major glycoalkaloid (an alkaloid bonded with a sugar) found in tomato plants is tomatine. This glycoalkaloid usually exists in all tomato parts, including the leaves, stems, and unripe tomatoes.

Research published in the Journal of Agricultural and Food Chemistry found that the highest concentrations of tomatine compound were found in leaves, followed by the stems, green fruits, fresh leaves, calyxes, and roots. However, the difference in concentration between the green fruits and fresh leaves is negligible; therefore, one isn’t inevitably “safer” to eat than the other.

Furthermore, glycoalkaloids are poorly absorbed by the mammals’ gastrointestinal tract and pass through swiftly to the feces or urine. So in people who are sensitive to these compounds, stomach upset might occur. Still, they’d have to consume an impracticable amount of leaves or green tomatoes to experience these effects.

So, are leaves on tomato plants poisonous or not?

According to the Toxic Plants of North America book, it states that a toxic dose of tomatine for human beings would appear to require no less than a pound of leaves and that ” the danger in most situations is low.” According to this food safety research (which compares the potential toxicity of glycoalkaloid compounds found in tomatoes, eggplants, and potatoes), tomatine is a gentle glycoalkaloid. It resulted in no substantial changes to body weight or liver weight when fed to mice, and therefore it is not considered hostile to human health.

Additionally, another research has shown the leaves and stems of tomato plants to have higher polyphenols (plant-based micronutrients that enhance general health and help fight disease) and antioxidant activity than tomato fruits. Furthermore, what is most amazing is the discovery of tomatine as a cancer inhibitor. The glycoalkaloid compound has been found to effectively suppress the growth of human breast, liver, colon, and stomach cancer cells or even kill them.

Lastly, this research implies that you could benefit from eating high-tomatine green tomatoes. Also, there’s a “need” to develop high-tomatine red tomatoes to study tomatine as an anti-viral anti-carcinogenic agent or cancer treatment. Therefore, judging from these researches and the lack of valid evidence that tomato leaves are poisonous to humans, we will have to look at the second myth.

You may have heard a story in your neighborhood of someone’s dog dying since he ate a bunch of tomato leaves or green tomatoes, but should this be a concern to you? Well, the truth is tomatine can be lethal for a dog if consumed in large quantities. Therefore, whether or not tomato plant leaves can kill a dog is a dose-dependent issue since you know that dogs eat all types of crazy things and don’t know when to stop.

If dogs have unrestricted access to your home garden and haven’t been trained to keep off plants, it is very likely they will chow down all your tomatoes, including the leaves. For small dogs particularly, this amount of ingestion can cause vomiting and diarrhea or even a hospital visit in the worst cases. This habit, however, goes for many other plants in your garden, not only the tomato plants.

So, is the toxicity level on a dog the same as humans?

On a high note, there’re other foods we eat that are known to be poisonous to dogs, like grapes, chocolate, garlic, onions, and raisins. However, the substances that are toxic to dogs don’t do the same damage to us. Besides, there is scant evidence in veterinary literature about the toxicity of tomato leaves. One study in Israel observed the likelihood of livestock poisoning by feeding tomato vines to cattle for about 42 days but found no health effects.

Tomato-leaf sprays are usually made by cutting and soaking tomato leaves in water, then using the sprays on different plants to control aphids and other pests. Since tomatine has fungicidal properties and is also part of the tomato’s natural defenses, then it makes sense that the compound could protect itself against pests and aphids when you extract it into a solution. However, theoretically, you’d make a spray with any part of the plant, like roots or the stem, which normally contains a higher amount of tomatine. Therefore, unless you are allergic to tomatoes, the tomatine in these tomato-leaf sprays won’t endanger you, and that is why it is used as an organic method to kill pests.

4. Tomato leaves are not sold commercially.

In Cooking by Handbook by former Chez Panisse Chef Paul Bertolli, he included a recipe for leafy tomato sauce. Another instance is in the No-Waste Vegetable Cookbook. It includes a recipe for a spicy, minty tomato sauce pervaded with tomato leaves and tomato leaf pesto delicious on sandwiches and pizza. Apart from those examples, we can note not many people have come forward to confess to their culinary use. However, that doesn’t mean that they are not edible.

Tomato leaves are best used as an infusion so you can capture the essence of a ripe tomato. For example, infuse a handful of tomato leaves in olive oil or tomato juice when you make gazpacho. You can also toss thinly sliced leaves with a little bit of fish sauce and use it as a savory garnish for fish or rice.

Additionally, gently fried tomato leaves make a tasty topping for pasta, just the way you would fry sage leaves in browned butter. Also, you can use crushed and dehydrated tomato leaves as a seasoning, folded into sprinkled over noodles or pizza dough.

As mentioned early, the tomato plant is initially from the Solanaceae family of plants informally known as the nightshade family. There are many genera that all contain alkaloids which can be toxic and non-toxic. In the family, “deadly nightshade,” also known as belladonna, is believed to be toxic to humans. However, this herbaceous perennial has historical use in herbal medicine as a muscle relaxer, pain reliever, and beauty aid.

Furthermore, it comes from the old-fashioned practice of women putting drops of belladonna berry juice to dilate their pupils. However, although tomatoes are distantly associated with belladonna, they don’t contain the chemical compounds that make belladonna berries so poisonous.

Conversely, the tomato does have an interesting history altogether. As its scientific name, Lycopersicum means “wolf peach” in Latin and derives from German folklore. Thus, when the plant came to Europe in the 16th century, most people believed it to be poisonous, like the Solanaceae family members, including belladonna, mandrake, and henbane. Besides, legend had it that witches used these hallucinogenic tomato plants in potions to summon werewolves. So, since these plant’s fruit resembled belladonna, it was nicknamed the wolf peach.

Nowadays, we know that although these plants belong to the nightshade family, they aren’t of the deadly nightshade variety since we consume the fruits. This uncertainty was later reflected in the tomato’s other known scientific name, Lycopersicon esculentum, which means “edible wolf peach.”

Besides tomatine, tomatoes contain a lesser toxin referred to as atropine. Some cases of people report digestive problems from eating tomatoes, particularly when combined with hot peppers. Also, there are unconfirmed reports of tomatine and its relation to arthritis. However, there are unsupported claims whatsoever. Although the effects are unpleasant, they aren’t life-threatening.

Tomato leaves have a different, spicy scent and are also covered with prickly hairs, which usually make them less than edible to most animals. However, some pets like dogs and cats who tend to chew on any plant, especially when the animal is young, might end up overfeeding on the tomato leaves, which is very dangerous. With that said, you will notice that tomato toxicity symptoms are more noticeable in dogs than in people, with various side effects that include digestive ailments and nervous system issues. So, it is best to stumble on the side of caution and keep your dog away from your tomato plants.

Some people may be more sensitive to alkaloid compounds and should avoid them. Also, individuals on certain dietary plans or taking specific supplements may want to look for advice from a nutritionist or their doctor. For the rest of us, feel free to try out. The benefits of consuming tomatoes are many, and the likelihood of toxicity is hardly worth mentioning.

Tomato leaves are flavorful and edible. You can cook the fresh, young leaves; however, consume in limited amount to avoid health complications like diarrhea and vomiting. Moreover, if you are on certain dietary plans or taking specific supplements, look for advice from a nutritionist or doctor. Since tomatoes are edible, it doesn’t particularly mean that you must consume them. But keep in mind, it is all about the amount.

Additionally, if your dog has eaten the leaves and other green parts of these plants, we recommend you to watch him carefully for any signs or symptoms of ptomaine poisoning. Sometimes, dogs, especially the young ones, may overfeed on the plant, so be keen.

No, that is if taken in limited doses since they contain tomatine which even some unripe fruit has and is mildly toxic to humans.

2. What are the main benefits of tomato plant leaves?

Research has indicated that tomato leaves and stems have higher antioxidant activity and polyphenols (plant-based micronutrients that aid in fighting diseases and enhance general health) than tomato fruits. Also, as mentioned, the discovery of tomatine as a cancer inhibitor.

Solanine, a substance normally found in the leaves and stem of the tomato plant and related plants, is lethal to dogs if consumed in large quantities. So, if your dog has eaten the leaves and other green parts of these plants, we recommend you to watch him carefully for any signs or symptoms of ptomaine poisoning.

4. Can tomato plant leaves kill you?

It is all about the amount, as we mentioned before. If you were eating let say two pounds of tomato leaves for various reason, there is a substantial risk that you’d be sick. If you eat more, then there is a likelihood that you might die.

5. Should I remove yellowing or dead tomato leaves?

In most scenarios, you can remove young leaves and stems by bending them back until they break off the main stem. This tactic is usually the best way. Besides, tomatoes usually ripen fast and benefit from sun exposure, so you need to remove the dead or yellowing leaves to allow the fruit to ripen.