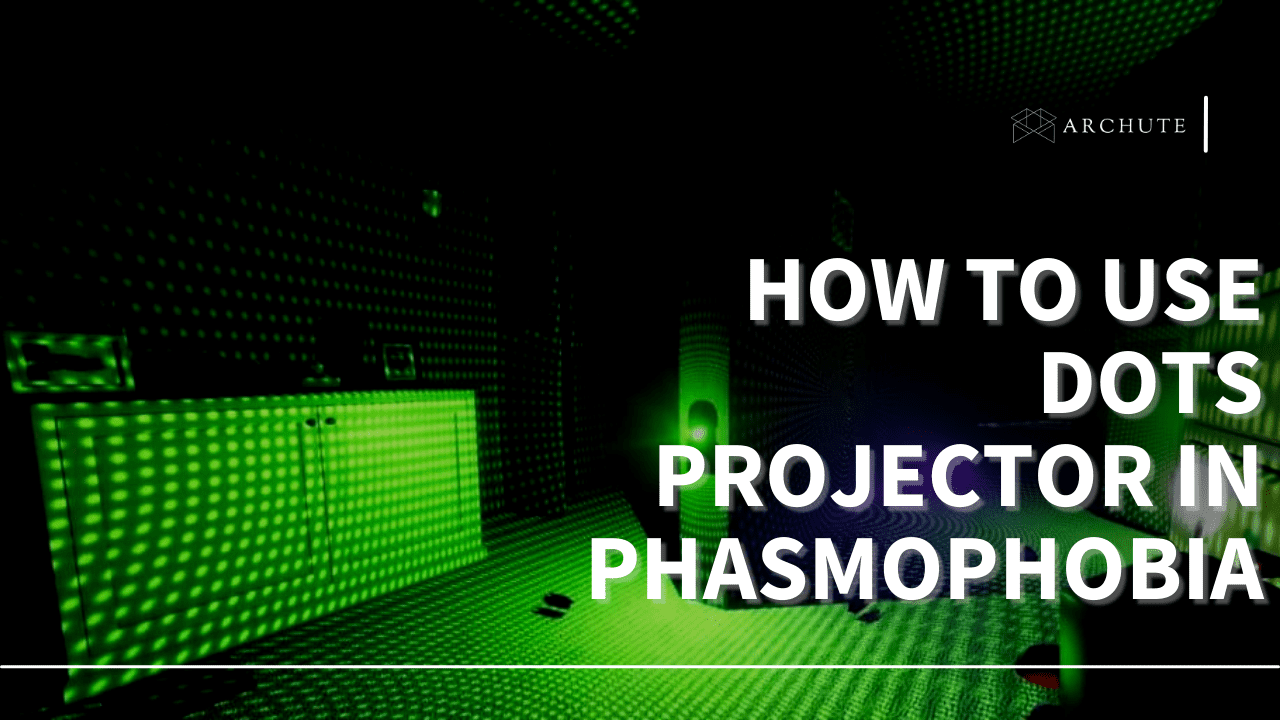 Detailed Guide: How to Use Dots Projector in Phasmophobia

Kinetic Games has released a new update for the famous Phasmophobia game. The new Exposition update has got fans excited, with an addition of two new ghosts and a new piece of equipment. First, however, everyone is talking about the new equipment known as the Phasmophobia Dots Projector. Fascinated fans are hungry to know how to use dots projector in their ghost-hunting quests.

If you are unfamiliar with Phasmophobia and interested in getting started, you are in the right place. We will talk about everything Phasmophobia, from how to use the new dots projector to how to play the game and win.

How to Use the Dots Projector in Phasmophobia

To use the Phasmophobia dots projector, install it in your hand first. Then once in your hand, face a hard surface and press the F key; the hard surface can be a wall, floor or ceiling. After it has been successfully attached, the Dots projector will emit tons of green light in the shape of dots all over the room.

When any ghost passes through the area covered in green lasers, you can see the ghost’s silhouette. Noteworthy, the ghost’s silhouette will appear and disappear quickly. Therefore you have to be extra attentive; otherwise, you might miss it. Pros recommend adding a night vision camera in the same room to help spot the silhouette.

While the silhouette alone isn’t sufficient to identify the ghost, it helps you know the ghost’s location making it easier to find and identify.

The green lasers from the Phasmophobia dots projector should ideally cover the whole room to stand a better chance of catching paranormal activity in a room. Therefore, the green light projected helps you gather more evidence if you place it in the middle of the room. Plus, you don’t have to worry about how many Lumens you need to project in daylight because most of the rooms in the game are pretty dark.

Which Ghosts Can Be Detected by the Dots Projector in Phasmophobia

There are several ghost types in Phasmophobia that you will have to hunt. Unfortunately, the Phasmophobia Dots projector doesn’t highlight the silhouette of all the ghosts. Nonetheless, it does work to highlight a good number of them, including the Wraith, Banshee, Oni, Goryo, Phantom, Yurei and Yokai.

The Goryo is one of the two new ghosts that came with the Exposition update and can’t be seen with the naked eye. Instead, the new ghosts can only be seen when a player looks through the camera using the projector’s matrix.

Sometimes, you may assume that the Phasmophobia dots projector doesn’t function. More often than not, the issue is either that the projector needs to be placed in the right location. Or you may also have missed the sighting of the ghost because it happens very quickly. Ensure someone is watching the night vision camera from a truck.

How to Play Phasmophobia: Pro Tips for New Hunters

Playing Phasmophobia can be daunting for many new players. Nonetheless, it is growing in popularity because of the adrenaline rush that comes with ghost hunting. Unfortunately, without proper skills, new players easily find themselves getting grabbed by the ghosts on their first attempts.

It is important to understand the equipment in use, what affects a hunter’s health and the different ghost types. The following is vital to surviving a hunt if you are a new player.

Hunting activities will mostly be localized in one room. It is, therefore, very crucial to find the haunted room before anything else. Finding the room can be tasking, especially when the location is large.

At the beginning of every investigation, you will hear sounds made by roaming ghosts. Use the Parabolic microphone, Sound Sensors, and thermometer to find the room easily.

Taking pictures of the evidence you have gathered is one of the best ways to make money in the game. With every picture, you are collecting evidence and making money. When a player dies, all equipment is lost; money becomes essential in buying back the lost equipment.

Be attentive to catch the voodoo dolls, and the bone spawns on every map. In addition, you earn extra cash when you take pictures of these items.

Taking pictures of ghosts is beneficial. Therefore, speaking its name to agitate it enough to make appearances is well worth it. You can locate the ghost’s name on the objective board in the truck. Whatever reaction you get from the ghost will help in gathering evidence.

However, it would be best to remember that this stunt is dangerous. The ghost can become too agitated to the point of hunting and killing the players. To be safe, have the crucifix set up and ready to prevent the ghost from hunting.

4. Which Hunting Equipment To Take Inside

Other than the Dots Projector in Phasmophobia, players can use several other handy pieces of types of equipment in an investigation. It is only sometimes possible to carry all the equipment into the house at a time. Pick out a centralized area in the house where you can place your equipment after hauling them from the truck to the house.

With recent updates, the crucifix has become easier to use than it was before. For example, you can use the crucifix to prevent the ghost from hunting twice. Set up the crucifix closest to the activity area, which is 3 feet for other ghosts and 5 feet for the Banshee.

Please note that when it works, one side of the prongs will fall off. So when both sides have fallen off, the player is left vulnerable; make sure to make the most of it while you can.

6. On-Location Items And Their Uses

There are different items that players can use in an investigation. For example, use the dots projector in phasmophobia to identify ghosts and gather more evidence in an investigation. In addition, the bone spawns and voodoo dolls can help the player earn extra cash if found and photographed.

You will find two useful keys in the street house and farmhouse maps. The black key will be helpful when ghosts activate the car alarm and the other one you can use to unlock a door when you are locked in by one of the ghosts.

A player can also use the ouija board to get answers or to incite paranormal activity. Then there are candles which are great when you need a degree of light to keep the players’ sanity high.

7. Use A Ouija Board Near The Edge Of A Map

Most players will attest that before the dots projector in Phasmophobia, the Ouija boards were one of the most useful items in the game. A player can easily complete a mission using the information from Ouija boards. There are only two major downsides to the Ouija board; it can agitate a ghost into entering hunting mode and drains sanity very fast.

It is safer to use the ouija board before entering the house; poke at it from the doorway. By remaining outside, you will be safer if any of the ghosts go into hunting mode.

8. What Triggers The EMF Reader

The first level shows you that the reader is on. The 2nd and 3rd reader indicates that paranormal activity has occurred in the room. The 4th level indicates a ghost manifestation in the same room. Finally, level 5 reading is important in identifying ghosts; players must record the readings in their journals.

9. Knowing When The Ghost Is Hunting

The flashlight only flickers when the ghost is nearby, which is dangerous for the player. The ghost can enter hunting mode, and the flashlight will remain solid if the player is far away. Players only have a small window to find a hiding spot before the ghost catches up.

It is important always to have a hiding spot chosen in case a hunt begins. An alternative to the flashlight is using the radio. Turn on the radio periodically to help hear movements like footsteps from the ghost. A steady static noise means the hunt mode is on, and the player should hide.

Players should always operate on Sanity levels higher than 70%. One way to keep player Sanity high, players can turn on the lights or they can take Sanity pills. Remember that when the levels dip below 70%, automatically, the ghost begins to hunt. It is also important to ensure no more than 5 lights are turned on to avoid the fuse blowing up.

11. What Equipment Should Be Used First

The flashlight should be in hand at all times. When starting a mission, have the camera also useful for earning cash by taking photos of the bone and evidence. A thermometer is another important item because the haunted room usually has very low temperatures. After you find the room, start using the testing items like the spirit box, the dots projector in Phasmophobia and the ghost-writing book.

To survive a hunt, ensure you always have a good hiding spot like a closet. If a player is on a larger map, looping the ghost through long hallways is another option for escape. Remember that you can outrun all ghosts except the Revenant. So it’s wiser to hide from the ghosts than to run from them.

The dots projector in Phasmophobia is a great addition to the investigative horror-filled game. Unfortunately, it is no secret that the tutorial only offers a little help to players on how to use this new piece of equipment. Nonetheless, with a little information, the dots projector in Phasmophobia can make finding and identifying ghosts easier and more interesting. Invest in one of best computer chair for long hours of gaming, to ensure you have the most comfortable Phasmophobia gaming experience.