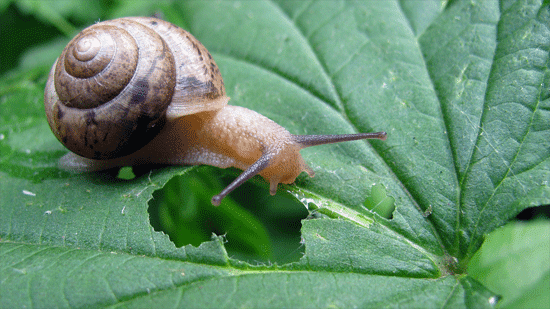 What Do Garden Snails Eat? Do They Have a Special Diet?

What do garden snails eat? You may need answers to this question if you are just curious or want to keep snails as pets. Well, that is quite obvious. To keep a pet, you know you should provide what it eats. So, you are about to get loads of information about snails and their food.

Snails are divided into thousands of species and what they eat highly depends on this. Different species have different eating habits, determined by their size, habitat, and age. Herbivorous snails are the most common, and they only eat vegetation, including fruits, vegetables and plants.

There are over 43,000 different species of nails categorized into sea snails, land snails and freshwater snails. This is categorization based on their habitat. Most snails are both male and female, known as hermaphrodites. So, they can reproduce on their own through asexual reproduction.

a). Land snails are also known as terrestrial and live on the land. Most terrestrial snails feed on plant crops.

b). Saltwater snails- live in seawater

The apple snail is among the most popular freshwater snails used as pets. It comes in many colors like gold, tiger and blue. It can grow up to six inches long, so try to get a larger tank if you intend to pet it. Unfortunately, these snails also tend to eat plants in the aquarium.

The garden snail, commonly known as Helix aspersa or the European Brown Garden snail, is well-known. It's a common snail in Europe and other areas of the world that damages many plants and crops.

The garden snail has a soft body, yellow or cream-colored shells with brown spiral patterns. This snail has a shell to protect itself when it feels threatened or not feeding.

Garden snails eat plants, making them very dangerous as they can destroy large plantations when they invade.

These snails, which can grow about five inches long, have only been around since the 1980s. It is native to Western Australia and feeds on various plants, including cereal grains, grazing grasses, and leafy vegetables. It is typically found in rainforests in Northern Africa.

The Giant African Land snail is one of the world's largest terrestrial gastropods, reaching about eight inches in length. Their shells range from pale to dark brown, with dark brown vertical stripes.

This invasive species can destroy crops and lead to many losses. They eat up to 500 different plant species, making them voracious eaters. In addition, these snails have adapted to living in different habitats, making them even more destructive to crops.

These are small species of snails that got their name from their preference for destroying greenhouses and orchards. It has a reddish-brown shell, yet the animal is bluish. Orchid snails are small, about an inch long, and can easily squeeze their way through tiny spaces.

This snail has a beautiful shell and is also known as the edible snail. This is the sort of snail used in the French delicacy escargot, and it ranges in length from one to two inches. It is an air-breathing land snail with a creamy to light brown shell with darker brown stripes.

They are also unique as they have two pairs of tentacles, one pair containing the eyes and one having smell sensors.

Now let's get to the point and see what garden snails eat.

What Do Garden Snails Eat?

As already mentioned, when in their natural habitat, garden snails eat different types of food depending on their species. Some may not even eat what is readily available but will work hard to ensure they get what they like eating. However, this is not true for all snails, as others only eat readily available and do not worry about looking for their favorite food.

Herbivorous snails eat many live plant parts, including leaves, stems, crop plants, bark, and fruits. In addition, many eat fungus and mushrooms, and some may add algae on occasion, even though these are crucial foods for freshwater snails.

This species feeds on several small animals and other mollusks like slugs or earthworms.

On the other hand, omnivores can consume both plants and animals, but they usually prefer to eat other terrestrial animals, making them predators.

Small snail species enjoy eating plants that have already died, animals or any other dead organic matter. These creatures are called detritivores because they eat detritus or solid remnants left in the soil.

Snails devour decaying matter, such as plant matter and animals. Therefore, they will eat whatever solid rotting matter they come upon, such as animal corpses, dead snails, or dead plants, as well as any trash they come over on the ground. Because of this, snails are part of nature's cleanup team.

b). Algae and Fungi

Snails eat algae and fungi such as yeast, mushrooms, and even mold. They eat fungi cons on trees, rotting garbage, mold growing in the bathroom or damp areas in the house. They also eat fungi on rocks and walls.

A garden snail eats plants, including their stems, tubers, and flowers. They like early plant growth and leafy greens but may eat older growth if that is all that is available. Dahlias, delphiniums, clover, hostas, marigolds, and nettle plants are favorites among snails.

Some of the plants you'll find snails eating in your backyard include;

Snails don't eat grass very often. They prefer freshly sown and newly grown grass to an established lawn when they do. Mature grass has a lot of silica, which makes it difficult for snails to crawl over and chew, and grass lacks several minerals that snails require.

These animals also eat tree leaves, young plant barks and branches. This usually occurs after heavy rains when the tree barks are softer. They may eat many parts of the trees, but they rarely harm the plants.

Snails eat plant seeds that have fallen to the ground or are buried in the soil. Therefore, snail owners frequently supplement their snails' diets with hemp, pumpkin, and sunflower seeds. On the other hand, Snails prefer the sensitive new growth that sprouts from seeds than the seeds themselves.

When the soil is calcium-rich, snails eat it a lot. This aids in developing a strong shell and the maintenance of a healthy shell. To supplement their calcium intake, snails that don't obtain enough calcium from the soil must eat more green vegetables, leaves, wood, fungi, corpses, bones, snail shells, limestone, walls, and rocks.

Garden snails also eat fruits, but little their citrus fruits intake as a lot of it may be poisonous to the snail. Some fruits that a garden snail will enjoy eating in your garden include the following;

What Can You Feed Your Pet Snail?

We know some people like petting snails. If you are among them and have no idea what to feed it, you can try throwing in different pieces of food to see what it likes most. You can start with small pieces of apples, cabbage, lettuce, and anything mentioned above.

Snails can also be picky eaters. Therefore, ensure you observe and know what your pets enjoy the most. They can also get bored with a single type of food. So, ensure you add different types of food to your pet's diet, so they don't get bored. Also, occasionally add algae to the tank as you change its diet.

It is also crucial to note that snails love eating with each other. So, when petting a snail, remember to pet more than one so that they can eat with their tank mates.

Calcium is a Snail’s Diet

Calcium is among the most important food ingredients for snails. Whether they eat the plants around them or the food you provide them, they should be calcium-rich. If your snail isn't getting enough calcium from its meal, you can add powdered calcium to the soil.

Calcium promotes the growth of escargot shells and helps to keep them from cracking. A lack of calcium might result in the formation of a thin shell.

Some calcium-rich foods that you can feed your pet snails include;

1. Are snails and slugs the same?

2. What attracts slugs and snails to lawns and gardens?

Slugs and snails love gardens and lawns since they're frequently irrigated or watered regularly. In addition, gardens give plenty of places for bugs to hide from the sun and wind, which can dry them out.

Slugs and snails love the sensitive leaves and shoots that they get from these plants. So even when an area experiences low rainfall, these pests can rely on well-kept gardens and lawns for the moisture and food they require.

3. What happens to slugs and snails with salt?

Salt dehydrates these animals, hence killing them within a few minutes. It is a chemical reaction whereby the salt acts as kryptonite and dehydrates the snail's slimy exterior.