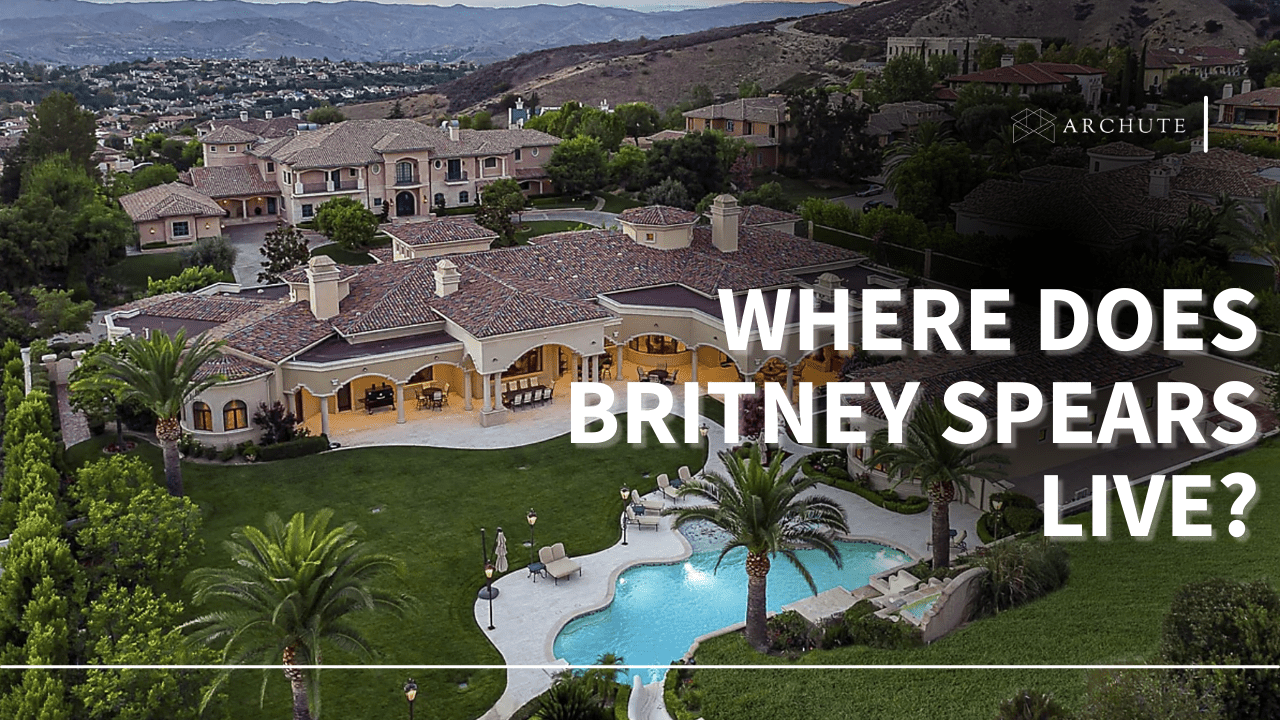 With a net worth of $70 million, you might be wondering where Britney Spears lives. Well, it is no surprise that the pop star and actress have some of the most luxurious homes you can hope to live in. So, where does Britney Spears live, and how many homes does she own?

Who is Britney Spears

Britney Jean Spears is an American star, singer, songwriter, actress, and dancer. She was born in 1981 and has been in the limelight most of her life. While she is referred to as the “princess of pop,” Britney Spears albums’ success has not come without ups and downs. However, Britney Spears has managed to stay at the top of her game, with no one coming close to her achievements and importance to pop music, especially in the 90s.

While Britney Spears has dominated the music industry, she has invested her money wisely in real estate. As a result, Britney has some of the most luxurious homes you can find anywhere and does a good job maintaining her business side while focusing on her career as a musician. Please read below to see where Britney Spears lives and what property she owns.

Where Does Britney Spears Currently Live?

Britney Spears owns a Calabasas mansion estimated to be about $14 million. This home is so nice that Britney Spears held her wedding on the grounds of the home. The house is located in Thousand Oaks, which is located in a gated community called the White Stallion Estates. The property sits on about 21 acres of land and has the most magnificent views.

Just like other celebrity homes, Britney Spears’ house is no ordinary home in all aspects. The house’s architecture is inspired by the neo-classical Italian style and looks like something from a royal setting. The building is clad with marble, and there is much to be desired in the house’s architectural elements.

The marble-ridden house has five bedrooms and seven bathrooms, and one-half bathroom. All these rooms have marble and stone floors, consistent in the house. As a result, the experience feels like something straight from a Sir Lawrence Alma-Tadema painting.

Let us look at the rooms in the house.

Nothing makes one feel more welcome in a home than a warm hug welcome. In Britney Spears’ case, you are getting a hug from the house. The house has a huge foyer that welcomes you with a wide open space that feels like a luxury hotel lobby.

The foyer has pillars inside, giving grandeur a chance to manifest. The pillars are secluded to improve the spacious nature of the room. In addition, there are large windows with a stunning view that relaxes whoever beholds the view.

The foyer has a fireplace for the winter and cold days, keeping the warm vibe throughout the year. There are living-room-style seats and a diner, all with a view of the Santa Monica mountains. Magnificent!

The formal living room is one space to behold. The vibe is consistent with the whole house. The warm and comfy seats are gathered around the fireplace to keep the conversations going deep into the night. The crystal chandelier hangs gloriously above the whole setup to create tension in the room.

The limestone mantle piece and the random chess board are some of the cool features of the room. But perhaps the coolest of them all is the wall-size windows that pour in views from the elegant landscapes outdoors. The windows fill the room with fresh air and natural light, which is one thing that can never go wrong.

There is a lot of joy in this room because of the design. The ornate details and the dominant long table not only lead the eye to the gigantic window but also bring attention to the food potentially being served.

The walls and the art makes the dining room one of the most elegant rooms to be in.

The grand staircase from the foyer leads to an open space on the second floor that looks over the foyer and adds to the high ceiling space. There is a long balcony that makes it a perfect spot for balls and parties. This beautiful house has a lot of potential with its lavish interiors.

The library is one of the more official-looking rooms in the house. The room is nothing short of presidential, with welcoming couches where you can recline as you enjoy your favorite scandalous novels. At the end of the room is a very official desk where one can do more official work and study. The large windows behind the desk look intentional and White House-inspired.

All the surfaces in the library are wooden, and you get an intellectual vibe by just stepping into the room.

You can tell by now that Britney Spears’ kitchen will be the most elegant. The one thing that immediately stands out in the kitchen is the chandelier that hangs gracefully over the kitchen island. In addition, the wooden cabinets in the kitchen are deserving of a house on private land.

The house features eight bathrooms, all of which are exquisite and full of fresh vibes. The bathrooms in the house are enough for when Britney is hosting her celebrity friends.

Perhaps the most important of all rooms in the house, the family room, sits on the front-facing portion of the house. The room has n elegant centerpiece right at the window with two chairs on each side. The chairs probably belong to Britney’s sons. The spacious family room has a panoramic view of the landscape around. The view from this room could be the best view not only in Britney Spears’ house but around Los Angeles.

Apart from the main bedroom, which has a bathtub right next to the gigantic window, four other bedrooms are en-suite and have the master bedroom vibes. The signature impressive tall windows in the house are in the bedrooms, too, and the views are stunning. You do not have to search for a marble bathroom in the bedrooms.

The main suite is not comparable to the other bedrooms, but I would not mind any of the bedrooms.

The home has a wine cellar capable of holding about 3500 bottles. So there is enough to get by. The temperature-controlled wine cellar is proof that Britney has taste.

There was no way this home would not have a pool and not just any pool. The infinity pool is in front of a relaxation area that matches the main house. The large pool is in the middle of a neatly manicured grass lawn.

If you thought the pool was enough, there is more. The home has a spa within it where you can relax and decompress. In addition, there is an orchard within the home. Let that sink in.

The home features resort-like grounds with neat landscaping that makes the home lush with life.

Britney Spears has taste, as proven by the floor-to-ceiling windows, a wet bar, movie theater, at least a six-car garage, and views like the Hollywood hills. However, this did not start just now. There are other properties that Britney Spears owns that will blow your mind. Let us look at some of them.

Serenity is a home that Britney Spears bought just outside Kentwood. The home is a huge sign of Britney’s success as she gave it to her mother, who lives there. In addition, Britney’s sister had the privilege of growing up in a home that was way better than where Britney grew up.

The home in Kentwood, Louisiana, is close to Britney’s heart as it looks like one thing she wanted to do for her family.

Hollywood would be the ultimate dream if you were a celebrity during Britney Spears’ era. Britney bought the home after dropping some of her most loved songs like “oops!…I Did It Again” and signing a lucrative deal with Pepsi.

Britney bought the home for $2.9 million and sold it for $3.9 million to Brittany Murphy, a late actress.

The Hollywood house is an architectural marvel with a modern look and clever use of landscaping. Britney bought this home in 2001, proving how successful she was at such a young age.

Britney Spears lived in her Hollywood house while dating a fellow singer and actor, Justin Timberlake.

What makes this penthouse special is that Cher first owned it. Other people who owned the house include Russell Simmons and the Rolling Stones guitarist Keith Richards.

The penthouse is a manifestation of modern architecture, with four levels, each with an elevator entrance. With fireplaces and an island kitchen in an open floor plan for the main living area, the house is consistent with Britney Spears’ love for open spaces.

A large terrace with a stunning skyline view of the Empire State building is the true meaning of living in New York. The house has multiple bedrooms and a flexible area that can have a lot of different uses. Their bath in the primary suite has a marbled floor, consistent with Britney Spears and her property.

The Italian villa-inspired home was 7,500 sq. ft of amazing architecture and a beautiful landscape. The Thousand Oaks house seems to be inspired by the Beverly Hills home. From the interior balcony overlooking a seating area to an Italian-inspired design. The other similarities include the island kitchen, the pool, and large windows. However, it is fair to say that the Beverly hills home comes nowhere close to the Calabasas mansion, but it was a worthy place for Britney Spears to live in.

Britney Spears has good senses- an ear for good music and an eye for good mansions. She seems to get it right every time. Britney noticeably moves to her houses with different seasons, especially once a new person gets in or out of her life more permanently. This is a great way to interact with the property because it signifies more than just a roof above the head but also a living space that houses the culture of its occupants.