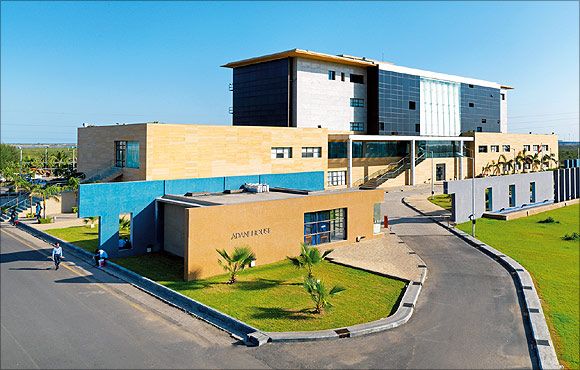 Gautam Adani, the owner of Adani enterprises, is an inspiration to many. He dropped out of college to launch a successful diamond business. Apart from his transformation from a commoner to a corporate tycoon with a net worth of about $143.9 billion, Gautam Adani's significant properties continue to be a major draw for everyone. So, where does Gautam Adani live?

When the year 2020 rolled in, Gautam Adani had just bought a 400-crore mansion in Lutyens Delhi. The land area is 3,4 acres, and it is one of the most costly properties the company has ever bid on. The property's valuation now stands at 400 crores. Adani also has a home in Gurgaon in addition to this mansion.

Additionally, he owns a home in Ahmadabad. The businessman is rumored to reside here the majority of the time. It is situated in an upscale neighborhood in Ahmedabad. Due to Gautam Adani's preference for maintaining asset and property privacy, little is known about the mansion.

Fortunately, we managed to find the little details of the Gautam Adani house. Continue reading to learn more about the most costly houses owned by this billionaire.

Who is Gautam Adani? 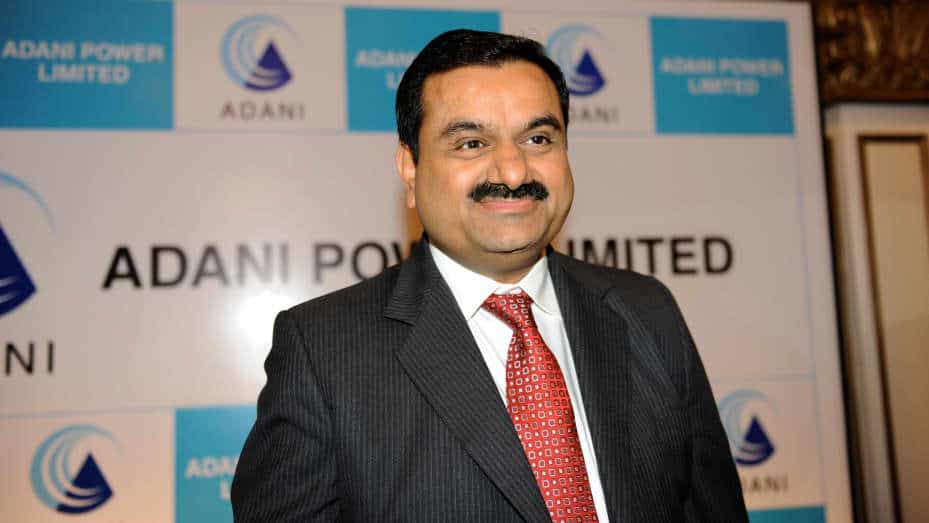 Mansukhbhai Adani, his oldest brother, is one of seven siblings. To better their economic situation, the family left the town of Tharad in northern Gujarat and relocated to the city of Ahmedabad. When he was young, his dad had a modest textile business.

He attended Ahmedabad's Sheth C.N. Vidyalaya School for his education. Then, he enrolled at Gujarat University to pursue a bachelor's degree in commerce but left after the first year. Priti Adani, a dentist and the head of the Adani Foundation, is his wife. Karan Adani and Jeet Adani are their sons. 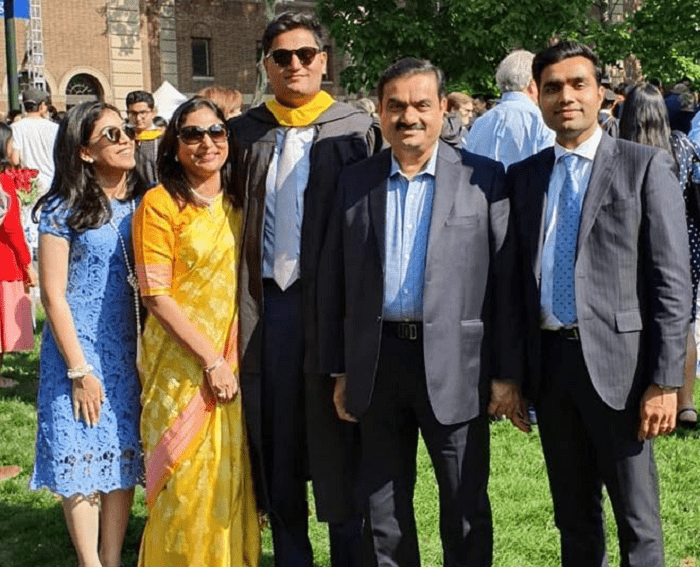 The business tycoon just climbed to third place on Bloomberg's Billionaires Index, making him the third-wealthiest person on the planet. His firm makes a major dent in the shipping, power, and renewable energy sectors. Keep reading to learn about the most expensive homes owned by India's richest man.

Where Does Gautam Adani Live?

Gautam Adani owns several properties, including a bungalow in Ahmedabad, Gujarat, his birthplace. His Ahmedabad bungalow is priced in the eight figures. Many of his homes double as commercial buildings, enabling the businessman to run his empire from the comfort of his home.

Pictures of the inside of Gautam Adani's home have never been made public. However, we only know a few details regarding his Ahmedabad and Delhi bungalows. 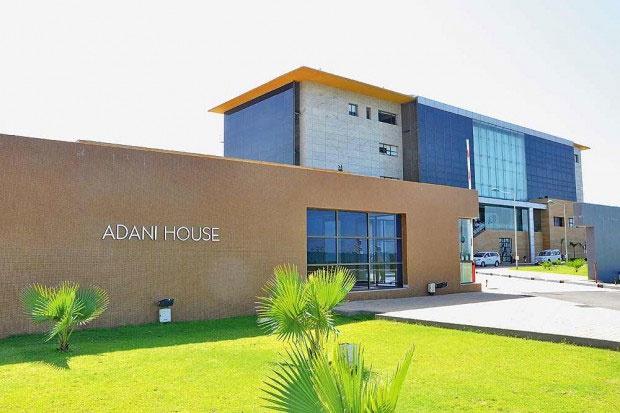 Just over two years ago, Gautam Adani's Adani Group bought a 3.4-acre plot of land in the Lutyens bungalow neighborhood. He spent Rs 400 crore on this mansion in the exclusive Delhi-Lutyens neighborhood. The mansion is also known as Lutyens' showpiece.

Since the massive property was acquired as part of the bankruptcy proceedings of Aditya Estates, the corporation is offering a bungalow price for it. 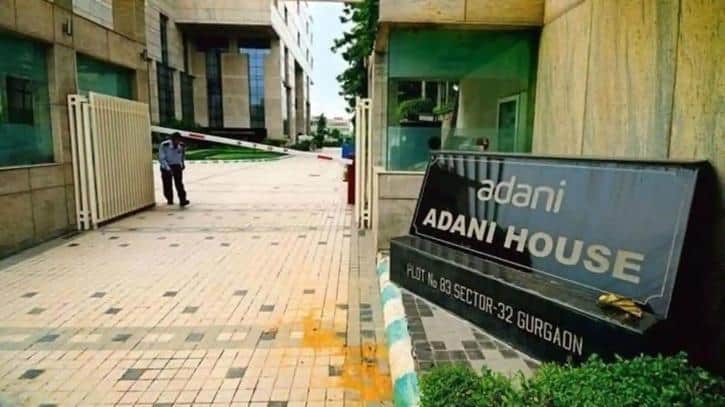 Aditya Estates have owned the land since 1985. However, they were forced to sell it off due to bankruptcy. The property was originally listed for Rs 1000 crore.

However, due to NCLT proceedings, the price was reduced to Rs 265 crore. For the land to be changed from a leasehold to freehold, Adani was required to pay conversion fees totaling Rs 135 crore.

The grand residence has a total of 25,000 square feet of construction and is situated on 3.5 acres of land. There are seven bedrooms and six common areas (a living room, a dining room, and a study).

In addition, there are 7,000 square feet dedicated to staff living quarters. The house and the surrounding lawn are the main selling points of this location. 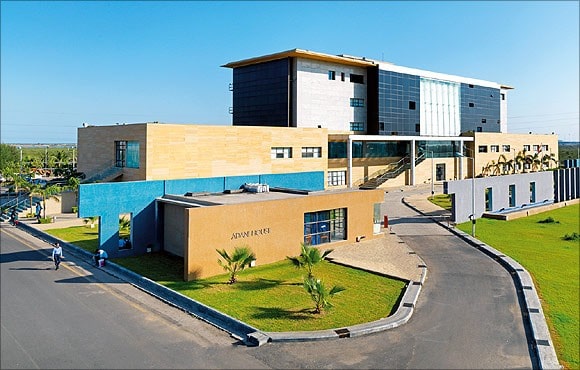 Billionaires have a legitimate need for privacy, so India's richest man avoids having his homes photographed. But, with a vast empire, this baron businessman has his castle-like mansion in Delhi, which is difficult to conceal.

Adani's enormous home in Delhi is outfitted with all the latest amenities. His residence is close to the central secretariat in the upscale Lutyens neighborhood of Delhi. The property is covered in a lawn and trees, giving the house a beautiful backyard. The residence also has numerous courtyards that provide character.

The bungalow was painted in soft, neutral tones to create a relaxing and calming atmosphere. It exudes the beauty and elegance of Indian architectural design. Furthermore, the arched window style adds vintage charm to the place.

Adani's estates all have one thing in common: they are surrounded by big, lush green trees in India or another country.

The property has all the upscale conveniences of today's society without sacrificing its natural beauty. The home comprises six living rooms, seven bedrooms, a dining room, and a library. In addition, there is a 7,000-square-foot staff room in the bungalow. 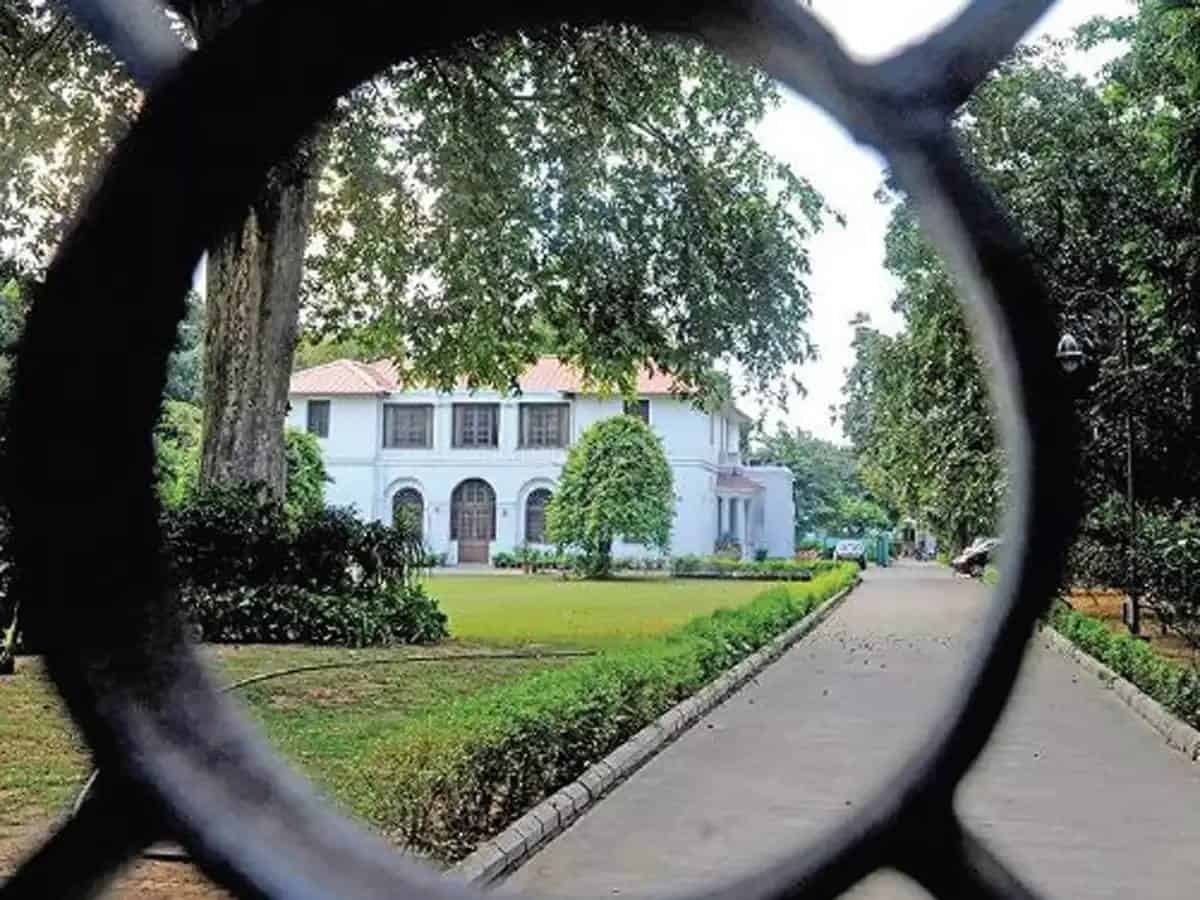 He has a nice mansion in Delhi and a more modest one in his birthplace, Ahmadabad. The bungalow he has in Ahmedabad is much like the one in Delhi. 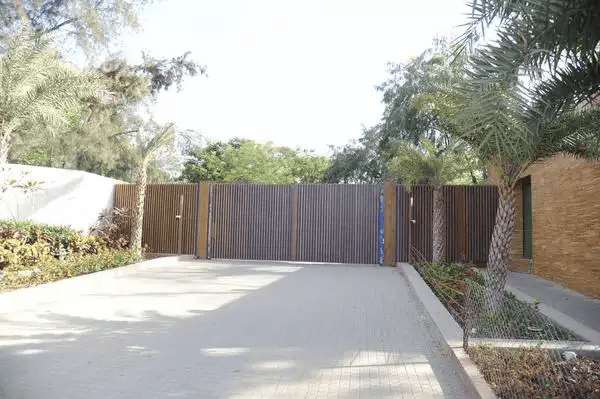 The Ahmedabad bungalow owned by Mr. Adani is conveniently located near the city's heart. After entering the beautiful property, visitors will notice the house is surrounded by verdant lawns and trees with deep roots.

The property's ambiance is improved and made more welcoming by the lawn area and numerous courtyards. The billionaire lives permanently in a home in Ahmedabad.

He resides there with his wife Priti Adani, sons Karan and Jeet Adani, and daughter-in-law Paridhi Karan Adani. Furthermore, it is impossible to miss while looking at his properties that they are all compatible with Vastu (the Hindu science of structure). 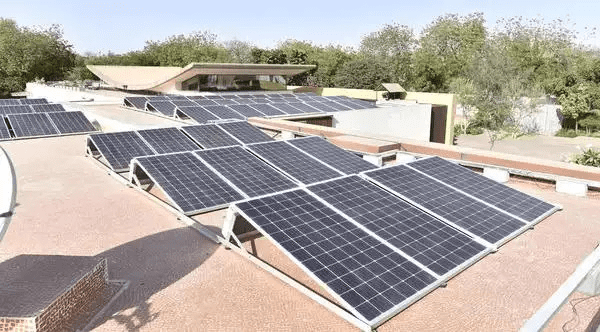 Leading by example, this Amdavadi business tycoon has chosen his own home to promote green energy. Billionaire Gautam Adani has installed a solar rooftop power plant at his sprawling residence to generate solar power for the daily electricity requirement of the property.

A 53.13 kWp solar power panel, one of the largest residential segments across Gujarat, generates 250 units of electricity daily, which is used to meet the power requirement of the residents during the daytime. 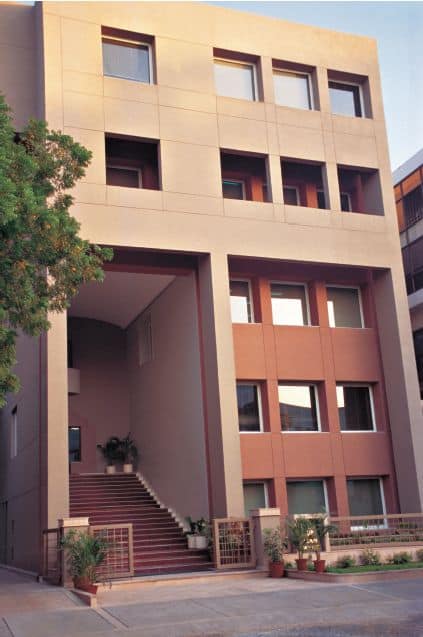 This corporate headquarters in Ahmedabad is situated just three meters from a busy road. Still, it is intended to create a gentle, calming transition up a huge flight of steps into the reception, an atrium court. 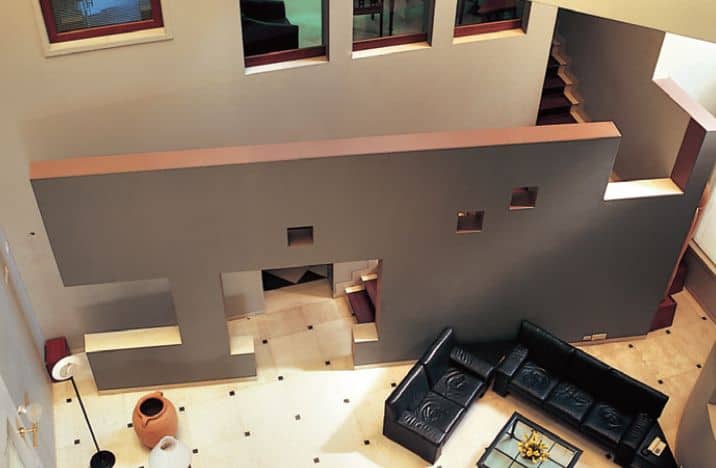 Offices on various floors have a view of the lobby. A sky bridge connecting the directors' offices on the top floor adds a new dimension to the atrium. 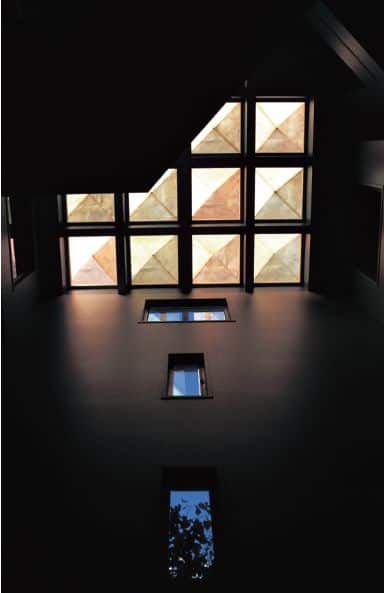 A further flight of stairs leading up to this block's first story is hidden behind a motive wall and is extremely intriguing. Each floor has a forecourt that introduces each wing and serves as a gathering spot for staff and tourists. 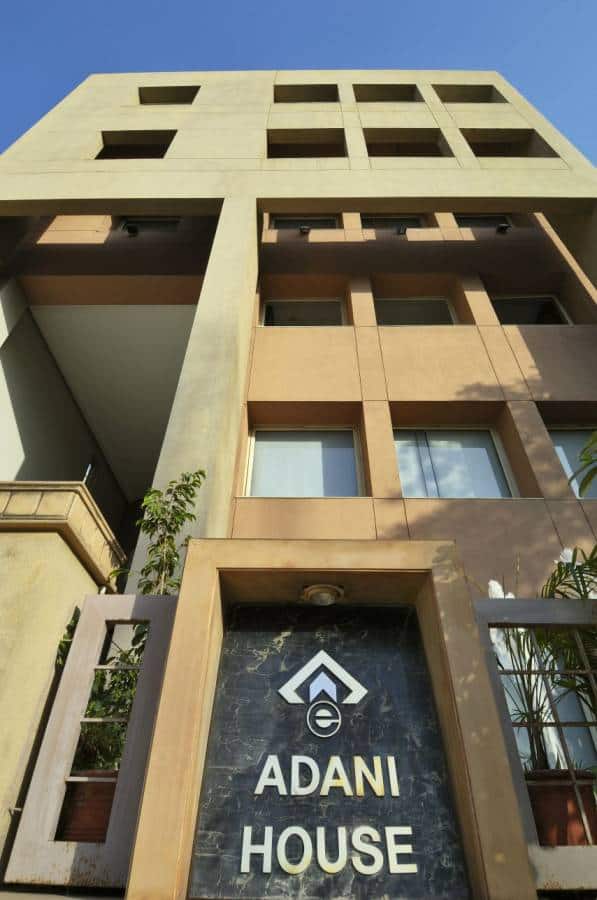 In the center of the structure is an interconnected network of open spaces that start at the reception area and extend to the upper floors. Atrium skylights illuminate above, allowing them to mirror the day's shifting ambiance. 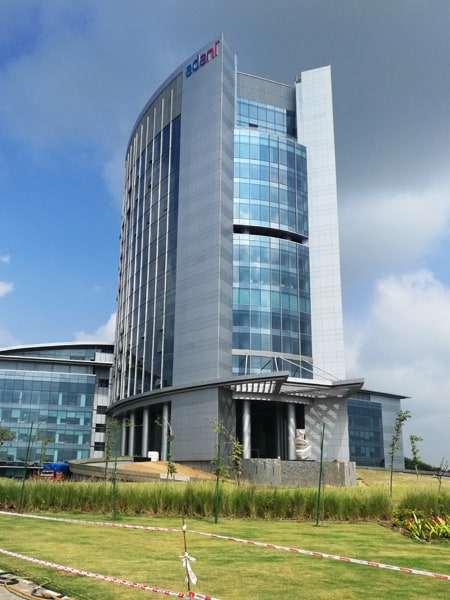 In addition to these three notable structures, he also owns a port in Australia called Abbot Point.

Gautam Adani is associated with a wide range of real estate holdings around the country. Gautam Adani has properties in the cities of Ahmedabad, Delhi, and Gurgaon. Each one of these is stunning and beautifully crafted. To become India's richest man, the port king had to work hard and overcome many obstacles.

He is a visionary individual. Fortunately, luck has been on his side as well. This, along with the fact that Gautam Adani could negotiate for houses, allowed him to purchase his Delhi home at a significant discount.