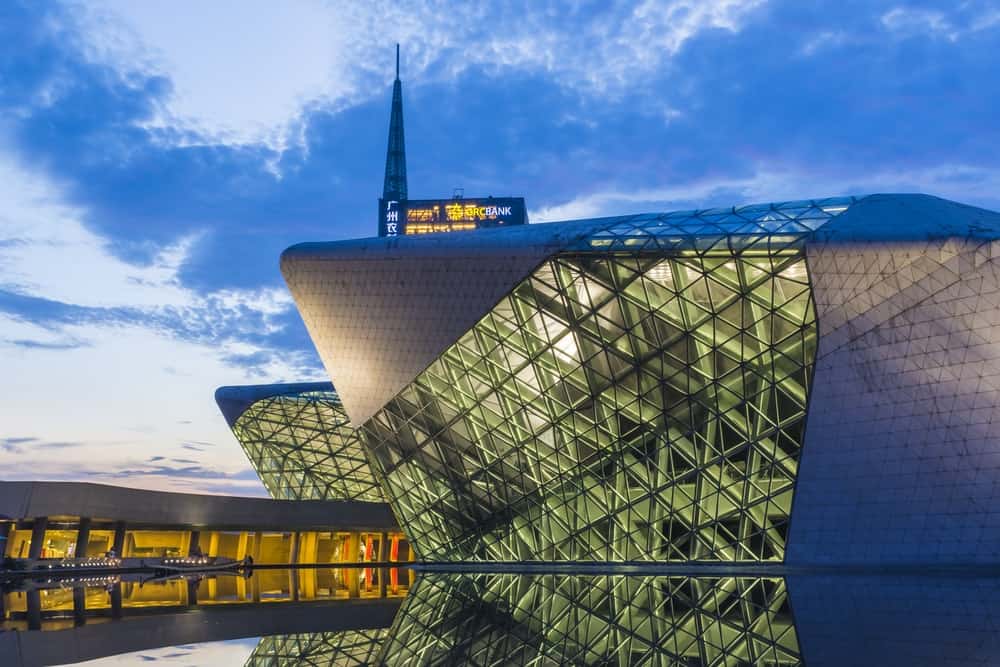 11 Stunning Zaha Hadid Buildings -“The Queen of The Curve “

Dame Zaha Hadid left a lasting mark on the architectural landscape. She was one of the most revolutionary architects of the 21st century, and her legacy continues today. Her firm, Zaha Hadid Architects, is currently one of the top architecture firms in the world.

She is known for her intensely futuristic architecture characterized by curving façades, sharp angles, and severe materials such as glass, plastic, concrete, and steel. Her style is often termed deconstructivism - a postmodernist architecture style that breaks down and manipulates forms to create unexpected works. This led to her being nicknamed the "Queen of the Curve" courtesy of an article written by the Guardian.

As a result of Zaha Hadid's creativity, fearlessness, and willingness to push the boundaries, her work has received numerous prestigious awards. Dame Hadid was the first woman to be awarded the prestigious Pritzker Architecture Prize. In 2010 and 2011 Stirling Prize, the 2014 Design Museum Design of the Year Award for her Heydar Aliyev Cultural Center, and in 2016, the first woman to be awarded the RIBA Gold Medal.

We'll be looking back at her phenomenal contributions to the field, from her futuristic buildings, such as Beijing's Galaxy Soho, to her innovative touch in the art museum world.

A Brief Biography of Zaha Hadid

Zaha Hadid (Iraqi -British) was born in Baghdad, Iraq, in 1950. She graduated in mathematics in Beirut in the 1970s and went on to study architecture at Architectural Association in London. She later opened her own firm in London in 1980. Zaha Hadid first gained recognition in 1983 when she won the Peak Leisure Club's competition in Hong Kong.

Though the project was never implemented, the drawings stood out, particularly as they highlighted Zaha Hadid's innovative creativity, combined with extensive research and her desire to measure herself against spatial limitations and transcend them, thus digressing from ordinary schemes.

She was mentored by a world-renowned architect, Rem Koolhaas of OMA, and others. Those close to her saw that she had very high expectations for herself and all those around her. “Architecture is like writing,” said Zaha Hadid. “You have to edit it over and over, so it looks effortless.”

One thing that was clear with Dame Hadid was that she was always thinking ahead. She once explained, " I started out trying to create buildings that would sparkle like isolated jewels, and now I want them to connect, to form a new kind of landscape, to flow together with contemporary cities and the lives of their peoples. "

Vitra Fire Station was one of Zaha Hadid's first architectural designs to be fully realized, and it embodies the dynamic and radical gestures that are commonly seen throughout her work. Her progressive design featuring raw concrete and glass was a sculptural work composed of sharp diagonal forms colliding together in the center.

The commission was to design and execute a building that would provide immediate relief for future disasters. this was after a fire had destroyed the Vitra Campus structures.

The result was a complex construction of tilted and clashing planes. Though admired by the architectural community, the firemen found its daring geometries and designs too much. Additionally, Weil-am-Rhein opened a fire station. This led to the building's short usage, and instead, the Vitra Fire Station is now used for exhibitions. “Like pebbles in a stream smoothed by erosion,” was how the Iraqi-British architect Zaha Hadid once described The Guangzhou Opera House. She later explained that that was what inspired the form. The smoothed pebbles rotate between large solid areas and transparent areas, showing the massive structure used to support each fold or bend.

The Guangzhou Opera House is a great example of architecture that celebrates structure. It is located at the center of the Guangzhou cultural district, making it a perfect setting for picturesque photographs as it reflects off the Pearl River. The building was designed to blend in with the river.

The Guangzhou Opera House is shaped to resemble two pebbles on the bank of the Pearl River. The main auditorium interior is lined with panels of gypsum molded-in flowing, organic shapes and lit with thousands of tiny lights that mimic stars in the night sky.

Not only did Zaha Hadid design a stunning and impressive structure, but through the Guangzhou Opera House, she was able to help the surrounding area establish its identity as an important cultural district in Guangzhou. 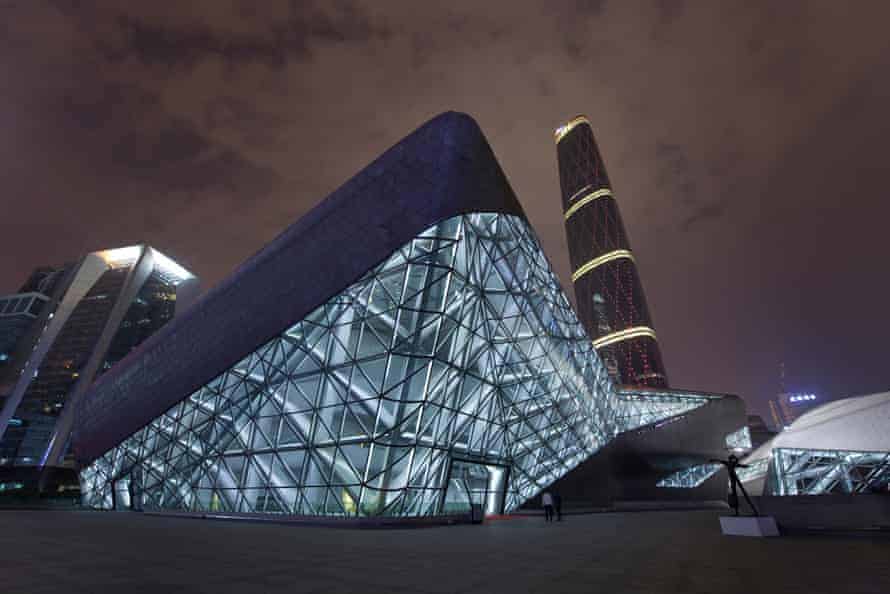 In 2000, Dame Hadid won an international design competition resulting in the Phaeno Science Center commission. Her building stood out for its futuristic design that was both a modern and graceful solution and met the center's demands dedicated to science. The Phaeno Science Center is currently still considered one of the most exemplary buildings in Wolfsburg, Germany.

The Phaeno science center is raised on fat concrete cones and is a cathedral of looming curves, jagged angles, fractured planes, and daring protrusions. The grand structure gives off the impression of floating off of the ground. This creates an outdoor public plaza that activates the site and draws viewers towards the museum.

The massive concrete panels fluidly “bend” to wrap around each curve and are only disrupted by the distanced windows cut out of the heavy concrete mass. The museum structure is similar to that of an enormous ship, with sloping walls and asymmetric scatterings of windows. The interior features angular columns and an exposed steel roof framework, giving the illusion of being inside a spaceship. 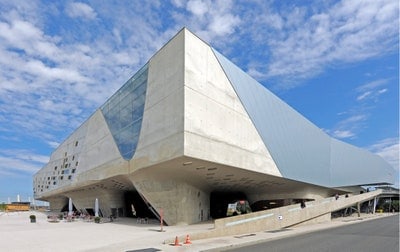 Though not a building, the Sheikh Zayed Bridge features in this list because of Zaha Hadid's ambitious design. The bridge was built to honor  Sheikh Zayed bin Sultan Al Nahyan, the country's principal architect, and former president, and connects Abu Dhabi Island to the Gulf south shore. The bridge includes a pedestrian walkway and four lanes of traffic.

The Sheikh Zayed Bridge features swooping arches and curves designed to imitate sand dunes' rippling. The 842-meter bridge is best seen at night when colored lighting floods its spine. From afar, it resembles a frozen scribble. 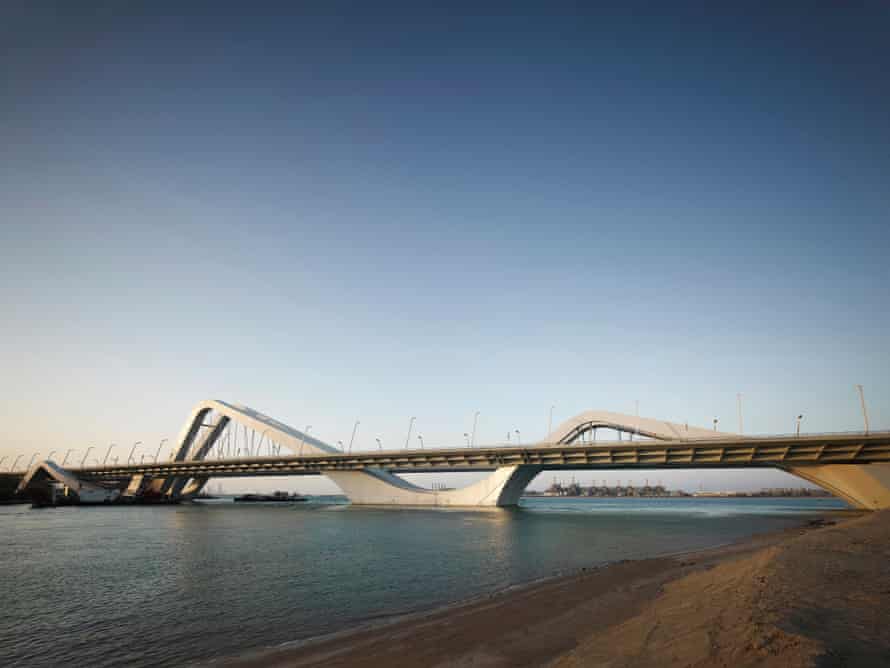 The Heydar Aliyev Center can easily be considered one of the most universally recognized buildings designed by Hadid. Zaha Hadid Architects was appointed following a design competition in 2007 as the design architects of the building. Having been a part of the Soviet Union, Baku's architecture still held on to the architectural and urban ideologies of the Union. Hence, Azerbaijan heavily invested in a cultural push towards modernizing its architecture and infrastructure after gaining its independence in 1991.

In 2014, the Center won the Design Museum Design of the Year Award 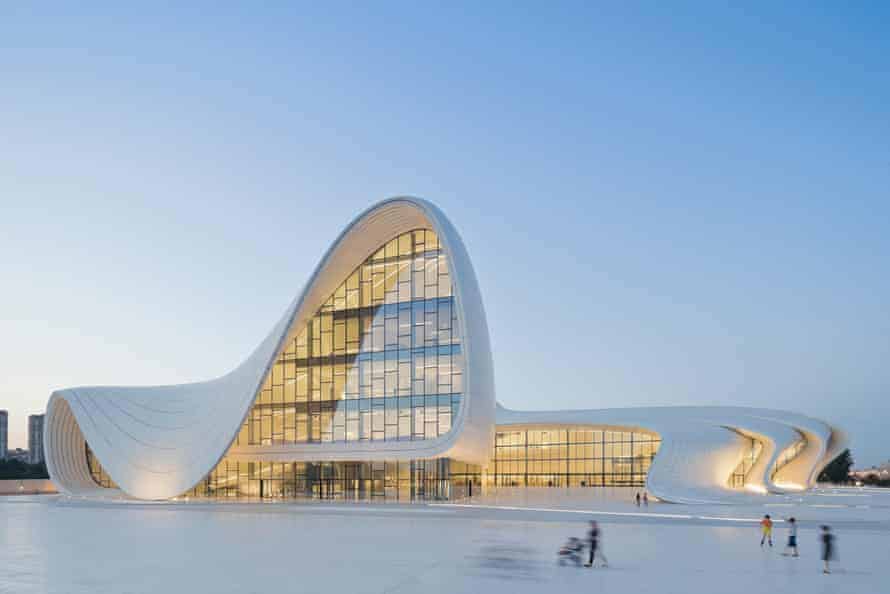 Galaxy SOHO is perhaps the most "space-age- looking" out of all Zaha Hadid's work. The design style comprises four domed buildings linked by a mixture of clear-cut connecting bridges and platforms. These, in turn, create pockets of space while the platforms appear to form somewhat of a central canyon.

The building is a great representation of how architecture can borrow key functional ideas while still creating and maintaining the original identity and design language. What makes this building iconic is that though it preserves Chinese ways of centralized organization, nothing else feels traditional.

The Beijing Cultural Heritage Protection Center criticized the building as they believed it did not match the style, color scheme or landscape, of the surrounding Beijing area. However, it can be argued that Hadid did address the city's needs in her own style. The intersections created through the bridges and connections and the overall design aimed to “respond to Beijing's varied contextual relationships and dynamic conditions.” The Guardian described it as the " most jaw-dropping municipal swimming pool in the world.” The London Aquatics Centre was originally built for the 2012 Summer Olympics and was designed to accommodate 17,500. The Centre houses two 50-meter pools and is inspired by the fluid geometry of water in movement. It features an undulating roof that is made of steel and aluminum and rests on three supports. The roof features window-like cutouts that allow natural light to filter in across the pool’s sparkling blue water. 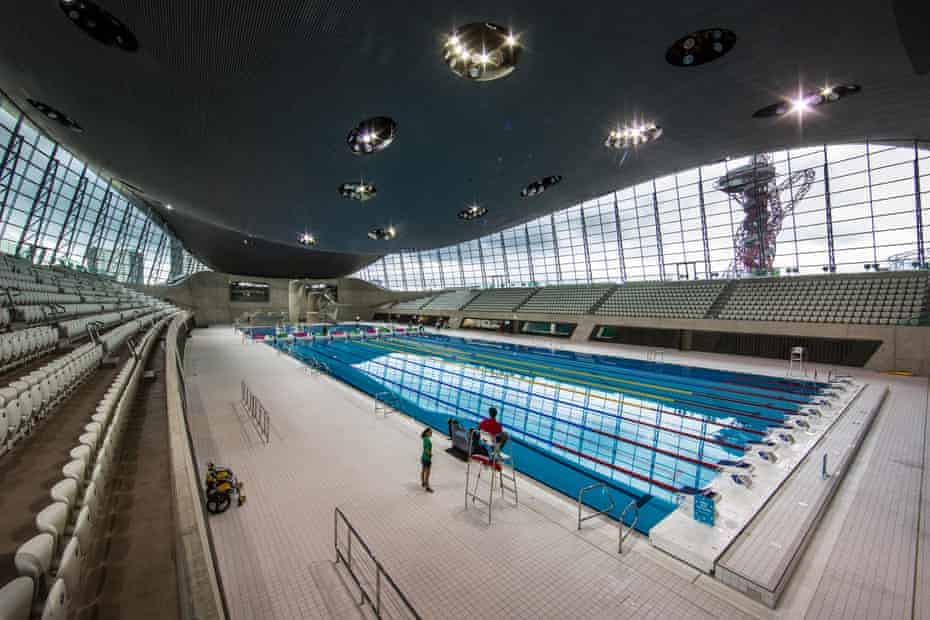 New York City's Highline is known for its spectacular and luxurious architecture. The Highline is an abandoned railroad that was transformed into a public park on Manhattan's West Side. 520 West 28th Street features the futuristic geometries that are significant in Zaha Hadid's work.

On the ground floor of 520 West 28th Street, there are four art galleries. The building also has luxury apartments and a duplex penthouse recessed from the edge of the building. The L-shape allows passersby's on the High Line to get a fantastic view of Hadid’s first and only New York City residential building. The Rosenthal Contemporary Arts Center can be considered a series of firsts. It was Zaha Hadid's first building in the United States, her first museum, and her first project on an urban site.

It one of the few projects of Hadid's that utilizes the use of cubic shapes. This was also the very first museum in the United States to be designed by a woman. The art museum demonstrates Zaha Hadid's ability to use architectural forms to create interior drama. She does this with the 30-meter long black stairway that passes between massive curving and angular concrete walls. 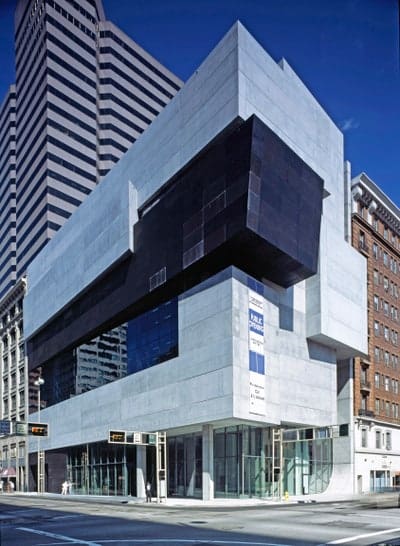 The Riverside Museum was Zaha Hadid’s first major building in Britain and was coined “Glasgow’s Guggenheim.” The building is the winner of the 2013 European museum of the year award. The museum features an impressive zinc-clad zigzag roof, and beneath it, a 36m-high glazed frontage overlooks the River Clyde. The steel-framed structure is constructed on the site of an old shipyard. It houses a column-free, 7,000 square meter exhibition space. The Riverside Museum has been criticized for its exhibition area display strategy – in that various exhibits are displayed high up on the wall and are too far from view. 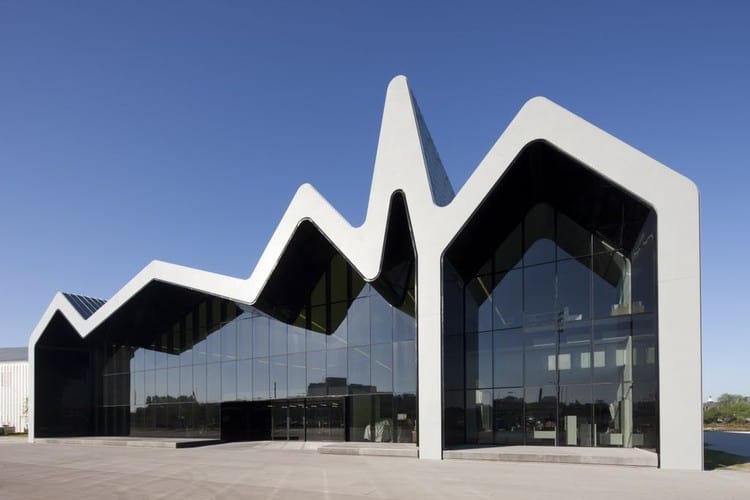 Commonly referred to as the starfish, Beijing's second international airport and the largest single-building airport terminal in the world. It is one of the last projects Zaha Hadid worked on before her passing in 2016. The airport's goal is to handle 72 million passengers annually by 2025. Hence, with this in mind, it was designed to organize passenger flows and lessen the walking time and distances between gates. Spaces were left simplified by separating airport programs into clear floors for international travel and domestic travel since security requirements are different. The airport, however, still features Zaha Hadid's trademark curves.