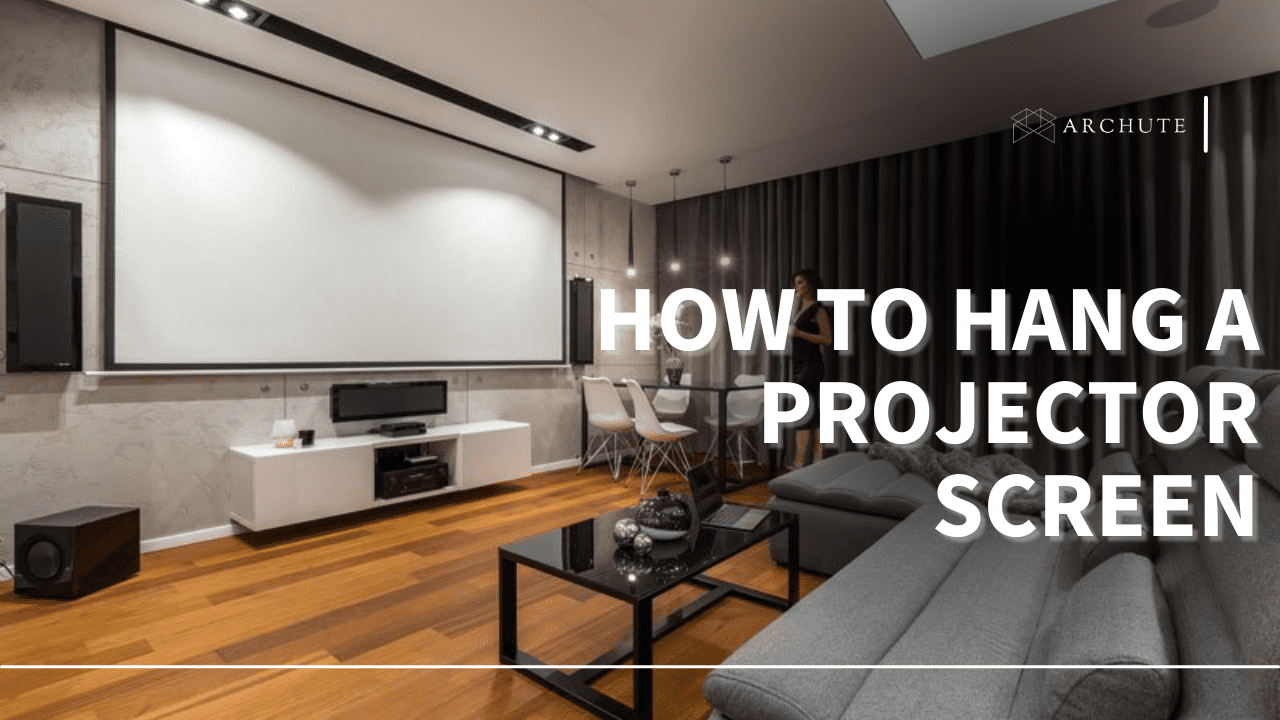 The number one perk of having a projector is that it is better than a TV in terms of cost, image size, and picture quality. So now that you have joined the bandwagon, we’ll show you how to hang a projector screen for the best viewing experience.

Considerations to Make Before You Hang Your Projector Screen

Before you hang your projector screen, there are a few considerations you need to make. They include:

1. Hanging From the Ceiling, Wall, or Outdoors

2. Hanging From a Drywall

Hanging a projector screen from a drywall may also not be safe. If the screen size is large (more than 60 pounds), you might need to screw sturdy ceiling joists and wall mounting brackets. Even then, you may still need to drill wooden supports and ceiling plates to safely hoist the projector screen.

Ceiling plates also help maintain a minimalist ambiance, as the screen can be kept out of sight. The projector screen slides up and down the ceiling plate at the tap of a button.

4. White Sheets as an Alternative

Using white sheets as projector screens also works. The fabric should be high quality and without wrinkles. A thick, opaque sheet is best. If you paint your wall white to function as the projector screen, you can obtain the necessary materials and tools from the local hardware store.

As you determine the right spot for your projector screen, ensure the location is not in direct light; the room should have ambient light spread in all directions. Avoid using the projector screen as a curtain for your windows or blinds because the screen material might not withstand the sunlight.

Your projector placement also matters while setting up; it should neither be too close nor too far. The projector should be placed directly ahead of the screen without tilting. Of course, it should be close to the power outlet.

Steps to Hanging a Projector Screen

Hanging projector screens should be easy. You can convert it into a fun DIY process that will save you on costs that would have been spent on a contractor’s services for the installation job. The steps are as follows:

Knowing this distance is important so you can divide your screen size. At least a third of the screen should be the same length as the eye line. The remaining two-thirds will be used as the watch screen.

Setting up the projector screen at the appropriate height may also be daunting. Online calculators help you calculate the throw distance and ratio depending on the brand you are using.

The farther the projector is from the screen, the larger the image size. Knowing that this distance is proportional is key in determining the best location for your projector screen. You may use your projector’s zoom feature to ensure the image fits the screen, but having it set at the best distance will give you a better edge.

Some projectors are short-throw in that they will be mounted 1 or 2 feet from the screen—these work best for screens being mounted from walls or limited spaces.

Some projectors will allow you to change the height of the image (either up or down). This is called the vertical lens shift. Moving the projector to different heights before installing it will give you an accurate height.

Both vertical and horizontal lens shift help to correct image resolution. Using the keystone correcting feature on your projector may reduce the resolution.

Now that you have all your measurements figured out, it’s time to install your projector screen from the ceiling. Since this is a DIY project, you will need suspended ceiling kits. The kit contains main runners, wires, cross tees, and all other necessary parts. It can be found at any local hardware store.

Always go for the highest quality when purchasing the items you need for installation. Durability stumps over cost every time.

1. Setting up the Projector Screen

You will need to ensure the projector screen is well-fitted to be installed from the ceiling or the wall. The steps are as follows:

You will need a ladder if you hang the screen from the ceiling. Have someone else nearby in case of an accident, and to make it easier to pass tools to you. Follow other safety instructions to keep yourself and everyone around you safe.

Once up, use a stud finder to identify where the ceiling joists are. Finding the ceiling joints connected to the wood above drywall ceilings provides more stability.

Next, place the brackets on the ceiling joists centrally to ensure sturdiness. Using a pencil, mark the points where the screws will pass through the brackets. Drill holes vertically so that the screws enter in a straight position.

Repeat the procedure for the other side of the bracket. Then fix the projector screen to the brackets firmly. You can use bracket extensions to bring the screen lower or higher if the need arises.

2. Mounting the Projector Screen on the Wall

Assuming you have the right measurements, you can decide the most appropriate height for wall mounts. Mounting from the wall may be easier than from the ceiling because all you need is to set the mounting brackets correctly.

Using a stud finder, go over the drywall and mark where it beeps. The identified part of the stud wall will be used to fix the wall mounts. Ensure that the marks are parallel to the ceiling so that projection will be clear.

The next step is to drill holes into the wall where the eyebolt screws will be. They will secure the mounting brackets that will hold the screen. Ensure the screen is secure and will not drift to the side or fall off.

You may hide the projector wires using cable tunnels or tucking them down behind crown molding. Roaming wires may not be a pretty sight to behold. Besides, they may be generally distractive.

3. Setting up the Projector Screen Outside

You may want to set up your projector screen outdoors for the perfect night out. It might be difficult to watch clear images during the day due to excess light from the sun, but during the night, the viewing experience only gets better.

It would be best if you had a portable projector which you’ll move to your garden or preferred outdoors. It should have a decent sound system and a reliable battery that will only sometimes rely on the main power source.

Selecting the best spot to fix your projector screen is the next step. Next, consider the fence or the wall. The installation process is similar to hanging from the ceiling or wall.

Ensure that the screen is projected firmly due to vagaries of nature such as wind or rain. Also, it should not be too low so pets can play with it. Another alternative is to include screen weighing always to keep the screen firm.

Picture a ship’s sails. They are made of lightweight material and will move at the slightest force. Therefore, having weights or staking them to the ground is critical.

Instruction manuals may be tough to decipher sometimes. While the language may be quite easy to follow, the stereotype that manuals are difficult may cloud perception remains. We do not claim to be an exception.

Therefore, to make things easier, we have compiled this section of the main takeaways from our article. We hope that this list is complete.

Again, read your projector’s manual. It holds valuable information that could save you time.