How to Select A Solar Charge Controller

Solar power has become a crucial power supply resource today. As people increasingly learn about the importance of using sustainable energy methods, so has the need for suitable resources for the same. In this guide, we shall be looking for the key factors to consider when buying solar charge controllers. These are essential tools, which you need to supply your favourite electrical devices with power. You must note that solar power is unlike most of the power supply sources you might have come across today. Solar chargers are technical, and you have to learn about the basics before investing.

The following guide identifies key factors to consider when buying a solar charge controller for your needs. Let’s get started

What is a Solar Charge Controller?

Otherwise referred to as a charge regulator, a charge controller is a voltage or current regulator, which you can use to protect your batteries from overcharging. It's a component which regulates the current and charges from solar panels and directs to the battery. Usually, the 12-volt panels can produce an average of 16 to 20 volts. Thus, if there if you fail to control the charging process, your batteries may overcharge. Most batteries require an average of 14 volts to charge fully.

Do I Always Need a Charge Controller?

You don’t need the controller always, but its best to have it when you have delicate devices.  Avoid going for the trickle charge panels, such as the types that can put out 1 to 5 watts of power. A good school of thought amongst most users is that if the battery produces 2 watts or less for each cell, then you don’t need any.

For instance, a conventional golf car battery can produce around 210 amp-hours. Thus, to keep up a series pair of these units, you may have to consider the panel with approximately 4.2 watts of power. Furthermore, the conventional 5-watt panels are almost similar to these, and they don’t need a controller. If you are using AGM deep cycle batteries, then consider going for a smaller 2-watt charge panel.

Why are the panels not just produced to deliver 12 volts? Well, the main reason is that if you do so, the panels will produce power only when cool, and in perfect weather conditions. However, you can never count on all these factors to be present. The panels need to have additional voltage, such that when the sun is low, or when there is a heavy haze, you will still get some power from the panel. A fully charged 12-volt battery will produce around 12.7 volts at rest, such that the panel has to produce at least this amount even in the most demanding situations.

Charge controllers are available in many sizes, features and price ranges. You can find the small 4.5-amp controls, or the large 80-amp MPPT programmable controllers, which come with LCDs. Usually, if you require large current outputs, you might have to go for two or more-amp units, which you set up in parallel mode. The most popular controls for the battery systems fall between the 4 to 60-amp category. However, some MPPT controls are known to go up to as much as 80 amps.

Charge controls come in 3 general types (with some overlap):

The simple 1 or 2 stage controls, which feature relays or shunt transistors, which regulate the voltage level. Simply put, these will disconnect the solar panel, when it achieves a specific voltage level. For all practical purposes, these components are large but are still present on some systems. Their only genuine benefit is that they have a few components, and are less likely to break

The three-stage types such as Xantrex and Steca are also common solar charge controllers. These types are nowadays common, and you will sometimes come across the shunt types.

The next types are the Maximum power point tracking (MPPT), such as the types developed by Midnite Solar and Outback power. These are the best controller types, with reasonable prices, and efficiencies that surpass the 93% percent range. Furthermore, these types are ideal for saving money on large systems, because they provide well over 25% more power when compared to the battery types.

Usually, controllers are available wit ha type of indicator, an LED, or series of LED`s. Most of the new brands, such as Outback Power and Morningstar MPPT, come with inbuilt interfaces for convenient control. The most basic types usually consist of a few small LEDs, which indicate the charge and power status of the device. Furthermore, most of these tools that have meters will show the current and voltage level produced from the panels. Some types even show the amount of current being generated from the LOAD terminals.

Just as the name implies, equalization refers to the process of making the cells in a battery back to have a similar charge level. Usually, it is a time of overcharge, which generally occurs in the 15 to 15.5-volt category. If some cells in the string are lower than others, the tool will help bring all the remaining cells to full capacities.

When it comes to flooded batteries, equalization also helps to stir up the liquid in the batteries by producing gas bubbles. That said, if you are in an RV or boat, this feature won't benefit you unless you have been parked for a long time. This because normal movement will just lead to the same results. Plus, the types that have small panels or super large batteries may not produce enough current to trigger the bubbling. In most off-grid systems, tools such as chargers and generators are suitable for equalization purposes.

Quite a significant number of charge controllers feature the “PWM” mode. It refers to Pulse Width Modulation. PWM is one of the main techniques used in float charging. Rather than a steady output from the controller, this unit produces a series of short charging pulses, which are direct to the battery. The controller regularly evaluates the state of the battery, to determine the best rate of sending pulses, and length of the pulses as well.

In a fully charged battery that has no load, the tool may “tick” after a few seconds, while also sending a small pulse to the battery. When it comes to discharged batteries, the pulses are usually continuous and long, and the controller may transition into the “full-on” mode. The main issue with PWM is that it can lead to interference in TV`s and radios, due to the sharp pulses it produces.

What is a Load, or “Low Voltage Disconnect” Output?

Some charge controllers come with an LVD output, which is perfect for smaller loads, including lights and small devices. The benefit of this approach is that the load terminals will have a low voltage disconnect, which will switch off the device, which is connected to the load terminals. It will also help keep the battery from running down excessively. THE LVD output is often ideal for small appliances such as lights. It is also strongly recommended that you avoid running small inverters on LVD output because inverters often have high surge currents.

Most systems do not require the LVD function, because it is only suitable for small appliances. Based on the rating of the controller, this average between 6 to 60 amps. You won't be able to run a small inverter when using the LOAD output. On some controllers such as the Morningstar SS Series, the load output can is suitable for heavy-duty relays such as generator starts. Also, the LVD output is usually used in RV and remote resources including monitors, cameras and more.

What are the “Sense” Terminals on the Controller? 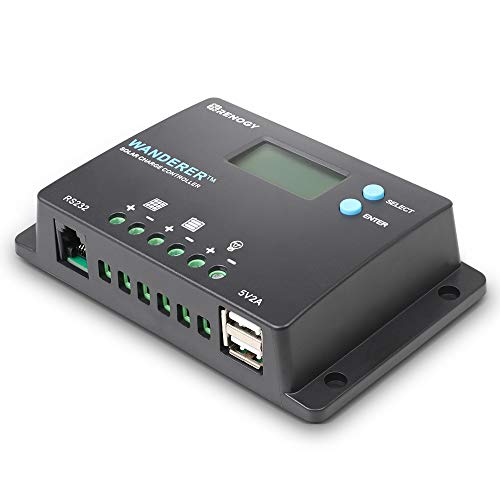 These terminals are only suitable for use when you have long wires between the battery and controller. Also, these wires carry no current and are sometimes small in size. The best size to use would be the #16 size because it's durable. More so, you can attach them to the sense terminals, and to the same terminals as the charging wires which are on the battery end.

What is a “Battery System Monitor”?

These tools can be ideal for medium to large systems, for tracking the specific ways in which your system charges your devices. However, they are not necessarily useful when used in small systems, but can be an excellent way to observe the functions of your system.

Equalization charging voltage – equalization voltage is the one you are less likely to come across. It occurs every 20 days, and it causes overcharging of batteries to help with desulfation. This technique improves the longevity and performance of the battery.

Boost charging voltage – boost charge is most of what you will come across when your battery is charging. This charging technique performs most of the charging on solar chargers. Usually, it will vary among different batteries.

Float charging voltage – the float charge is used when the battery is full to stop overcharging issues. Even if it still charges the battery, it reduces the current and voltage to an equal level. Thus, it can match the discharge rate, which often depends on the size of the battery.

A solar charge controller is an essential component of a solar charging system. You place it between the solar panels and battery bank, whereby its role is to control the amount of charge direct to your device. Being able to select this device, is unlike most chargers you have come across on the consumer market. You may have to consider how of factors to ensure the best charging results for your needs.

Charging your devices using solar power is much unlike using the conventional DC power ports in most homes. You have to practice caution to help protect your devices from overcharges.

Do Solar Panels Work in Winter: An Absolute Guide