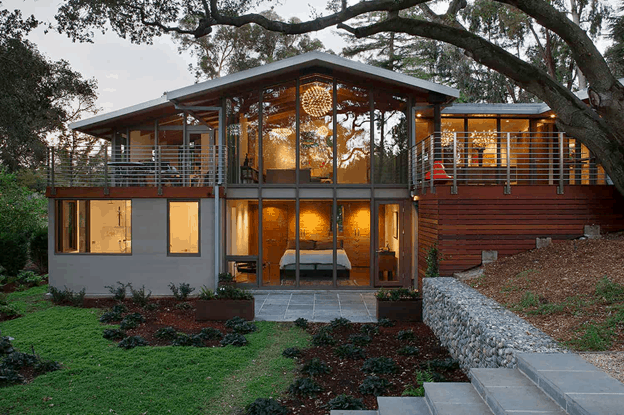 by Ian Mutuli
Updated on 7 November 2022

Frank Gehry, a Canadian-born American architect and designer, once said "Architecture should speak of its time and place, but yearn for timelessness.” His iconic predecessors, Ludwig Mies van der Rohe, commonly referred to as Mies, Le Corbusier, Alvar Aalto, Walter Gropius, and Frank Lloyd Wright, are all regarded as the pioneers of modernistic architecture.

Clean, simple lines characterise the Mid-century Modern home with fair use of natural materials and generally don't include decorative details. There's the use of overhanging eaves with low-pitched roofs, which appear like a continuation of the interior ceiling.

The architectural design seeks to blend the inside with the outdoors by using materials from nature such as wood-panelled walls, exposed beams, or concrete and stone features. A perfect blend of form and function modestly designed.

Architecture is a reflection of the times we live in. These Bauhaus architects and designers migrated to America from Germany after World War II in the 1940s and 1950s. They believed in social change and the fact that architecture would help build a better society as they started this movement.

Qualities of a Mid-century Modern Home 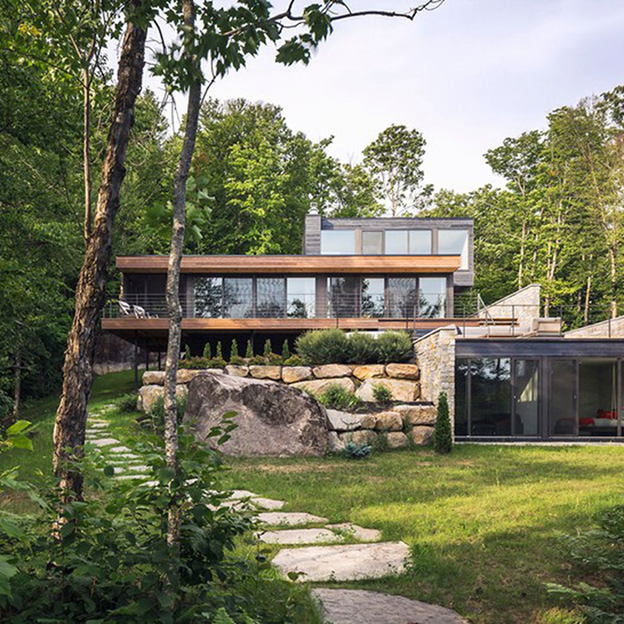 A distinctive feature that's most notable about the mid-century modern design is the constant use of regular symmetry in flat planes, especially on the roofs. 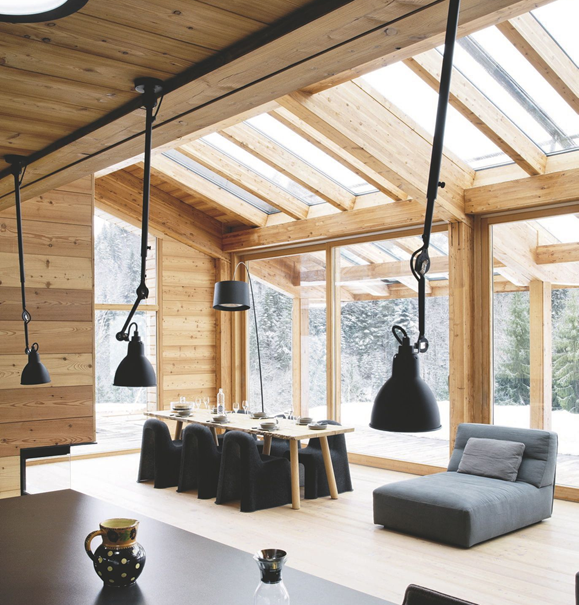 There's use of sliding glass doors and other expansive glass walls. Oneness with the outdoors and nature and allowing natural light to enter the house is vital. 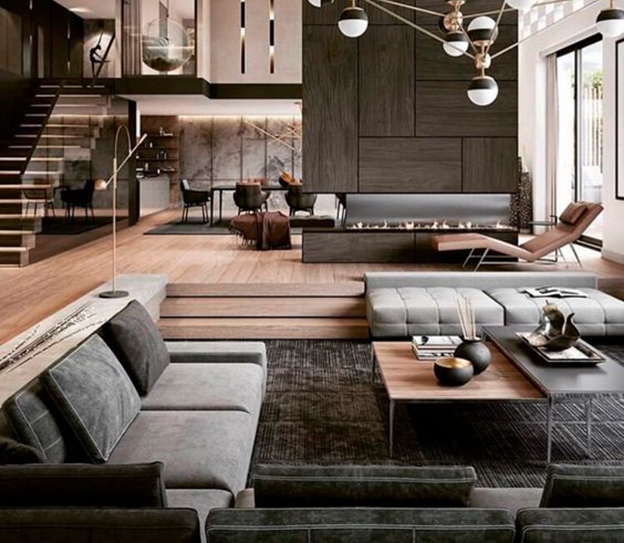 Change in elevation could be even in the small steps that go up between rooms to create a split-level space. Even if it's by a small margin, differing by just a few inches. A mid-century modern home uses partial walls or cabinets in varying heights to create a difference in the space.

Mid-century Modern houses are located in a natural surrounding. And for this reason, the rooms have large windows and outdoor views and multiple access points, all to encourage healthy living and beautiful coexistence with nature. This mirrors the Northern-European way of living. 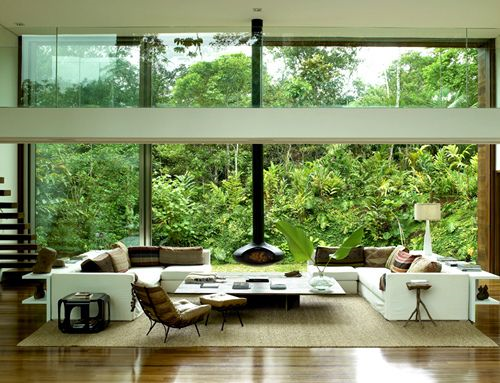 The Best Mid-century Modern Homes of All Time 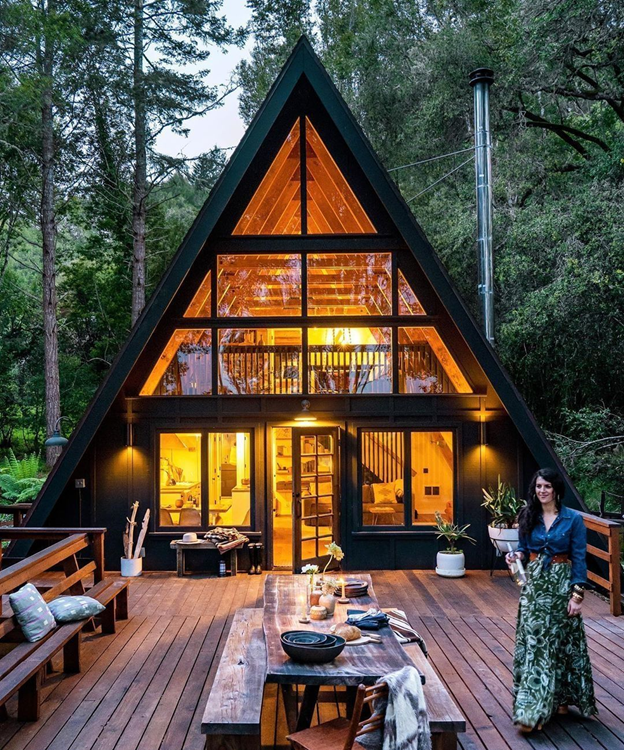 An architectural marvel that makes a perfect hideaway spot. These cosy Mid-century home cabins were designed by some world-renowned architects such as Jean Prouvé and Le Corbusier. These Mid-century cabin homes are timeless pieces that have proved a gem for generations.

Architecture approaches this cabin design with a rustic rigour, creating a self-aware compact living right in the heart of nature with its appeal today.

This Mid-century cabin house is known for its single floor that is close to the ground design. However, some homeowners like having two floors with an upper loft style. Like all Mid-century home designs, it has large glass windows.

A-frame homes like these make great family homes and second homes alike. These home designs have an open floor plan with large glass windows and multiple access points facing out. The yard is also characterised by minimal landscaping to create perfect harmony with nature.

A concept that is rooted in the mid-century aesthetic. The glass cover creates a facade that has the exterior space feel like an extension of your home. 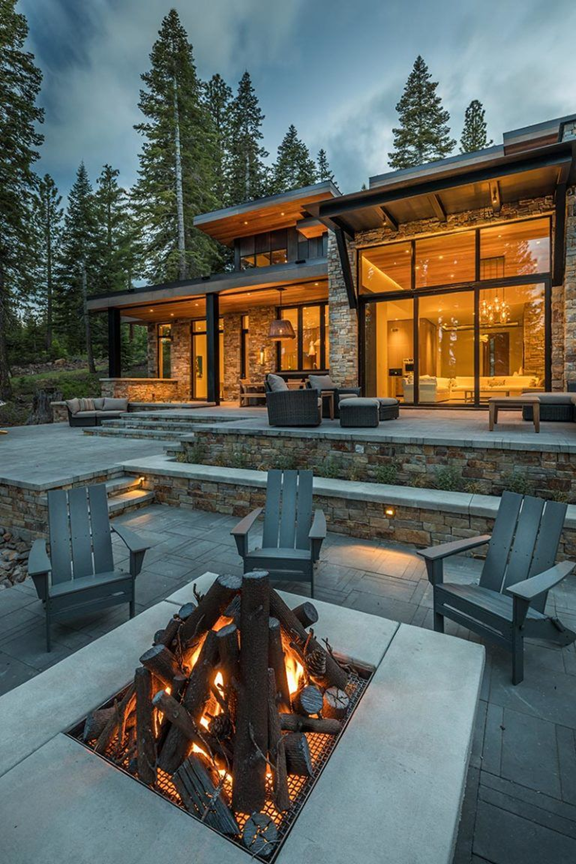 This all-time classic Mid-century Modern design is quite popular these days. This Mid-century Modern home residence has an exterior that has classic style design elements. To visually elevate the design, it has a low-slope roof with high-vaulted ceilings, a spacious open-living arrangement, and a beautiful courtyard with green space or luxurious gardens with a slight touch of modernism.

An extra floor is cost-conscious mainly since it's generally more affordable to build up rather than expand out, especially with the postage-size urban property we have nowadays. A two-storey home style offers space for a basement, which is a great way to expand the living space in a way that suits your family’s needs.

The basement can be used in many ways. You can use it as a modern recreation room where you can finally put that enormous wall-to-wall TV, or a man-cave for that latest gaming system or simply more bedroom suites that offer a little more privacy for teenagers or in-laws or extra bathrooms for family.

No matter the use, basements are a great way to create more space in homes today. Mid-Century Modern homes have been known to be narrow and simple in the past. However, modern architecture offers a harmonious blend with innovative layouts and outdoor spaces that still brings about the connection in this new age. 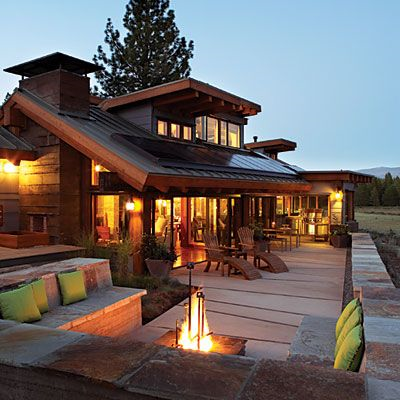 Popularly referred to as Ramblers, this Ranch-style originates from southern California and goes way back to the mid-1930s. Back then, the Ranch-style Mid-century home design picked up its popularity since financial controls encouraged the building of small houses after Worldwar II. By around the 1950s, it was the most predominant mid-century home in the country.

Its popularity has grown due to the fact that;

The mid-century modern Ranch style blends both simple traditional and modern construction and the use of aesthetics. It is characterised by: 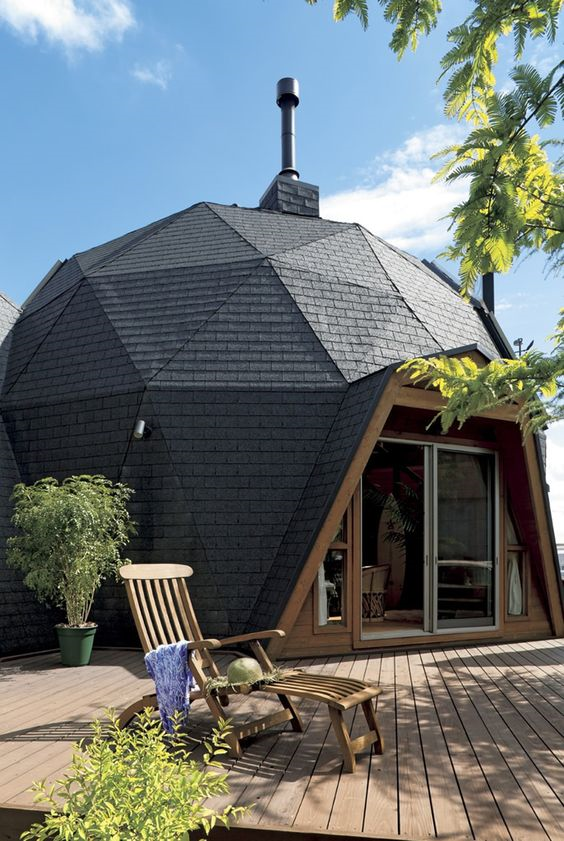 The geodesic style creates this dome shape by the use of interlocking triangles. Geodesic mid-century houses are known to be highly energy-efficient thanks to the surface area to volume ratio.

A perfect example is a dome home built in 1953 and historically dubbed as the Sunflower residence. This specific masterpiece was designed by James Dresser, who was once an apprentice to Frank Lloyd Wright. Unique exterior features include the peaked, geometric windows, glass walls that let in natural light but at the same time block harsh direct rays.  A great way to blend in the outdoors with the inside. 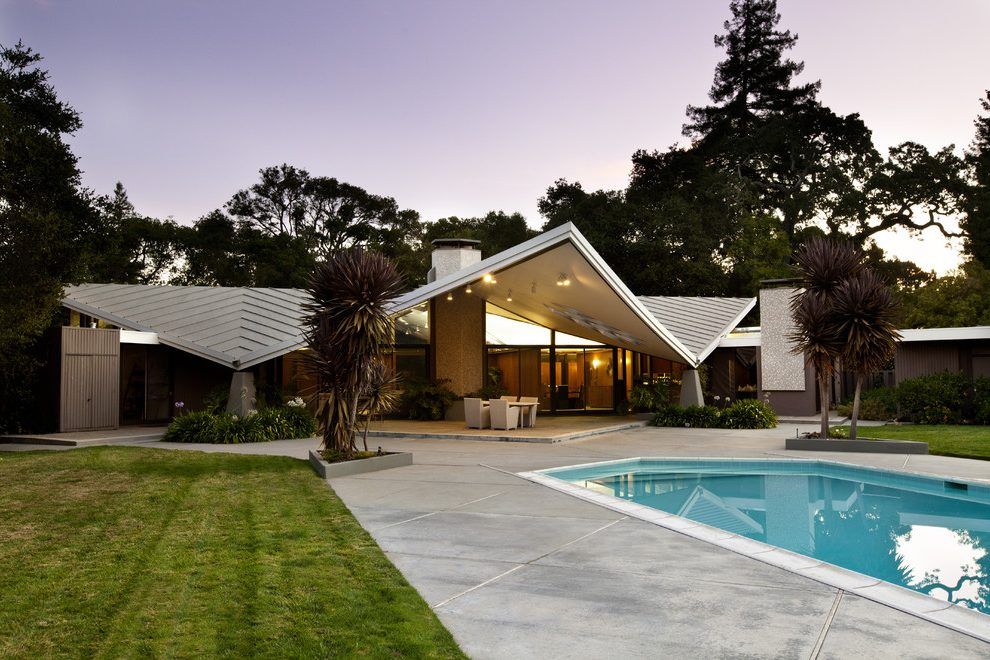 While describing Mid-century Modern, the elements that describe the modern aspect include casement and picture windows, large overhanging eaves, and bold geometric shapes. Rooflines are often low in such interesting shapes.

The homes are somewhat similar to Eichler ranch-style home design by the famous architect Joseph Eicher in the minimalistic approach to the indoor and outdoor design. Modernist homes in the Alexander home design have distinctive roofline designs, including the Butterfly, slanted and exaggerated gables.

They also have decorative concrete blocks, also known as breeze blocks. Like all other Mid-century Modern house designs, they are characterised by expansive glass windows that bring the outdoors in. Most modern Alexander homes often come with in-ground pools. Like in the Eichler ranch -style, Alender homes have exposed rafter tails with post and beam construction.

A. Who are the Mid-century Modern architects that I need to know?

Ludwig Mies van der Rohe closely worked with famous architects such as Le Corbusier, Walter Gropius, and Frank Lloyd Wright, who were all regarded as the pioneers of this modernist architecture. One of his well-known works is The Farnsworth House, one of the world's most famous houses.

Richard Joseph Neutra, an Austrian-American architect, is considered as one of the most important modernist architects who was primarily based in Southern California

A. Quincy Jones was an architect and educator known for pioneering the use of greenbelts and green design in urban planning

Lloyd Wright was a mid-century home design pioneer who primarily has his famous works in Los Angeles and Southern California.

Albert Frey is a Swiss-born architect who established the modernist architecture known as the "desert modernism" that highly dominates Palm Springs and the California residence area.

How to Make a Homemade Projector (Step-by-Step Guide)

What Is an Atrium-Style Window (Benefits Included)

How to Use Your iPhone as a Projector For Added Functionality

Inside a stunning modern home at the very top of b