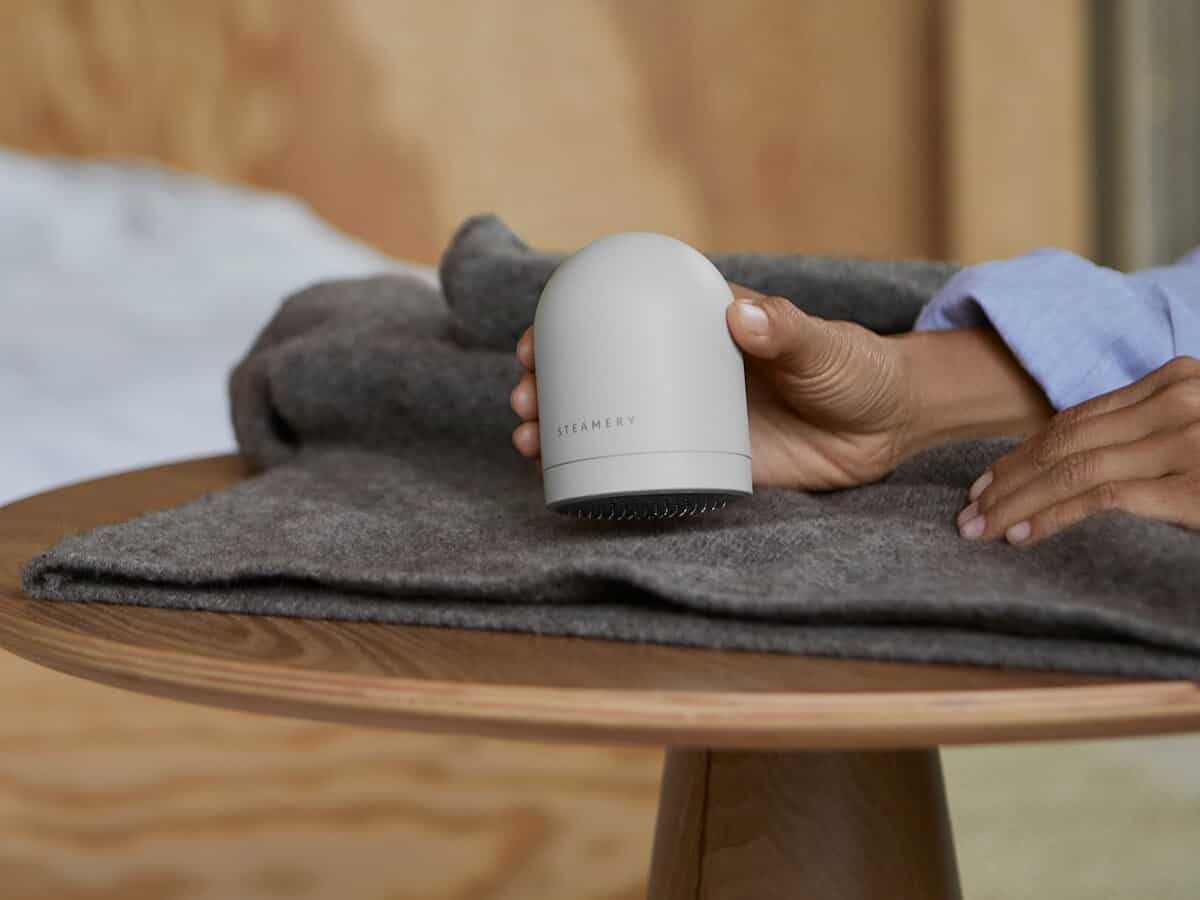 How To Remove Lint From Black Clothes And Other Clothes?

Nothing ruins a perfect smile faster than noticing lint all over the favorite, bold and all-black outfit- especially if that's the killer look you'd planned out for the day. You can devote 20 minutes of an already chaotic morning to lint-rolling it yourself back to its glory, OR you can try some of the easy ideas we have on deck and get it off quicker. Here is all you need to know on how to remove lint from black clothes.

Simply put, lint is a fuzz that's created from loose and broken threads on your clothes. It's made up of the little pieces of fabric that come off during friction while washing and gather in your washing machine's lint trap.

Removing lint from clothes can be a pain, and you really can't ignore them- especially if you're dealing with gray or white lint on dark clothes. To get rid of lint, you can use a lint roller or go for products and objects you can easily find in the house. There are plenty of ways to prevent lint from developing on your black clothing.

Why Do My Black Clothes Have So Much Lint?

Lint is mostly made up of tiny fibers and loose threads from clothes that are scraped loose from the everyday wear-and-tear. Lint from clothes also tends to clump together from static cling. So you'll most probably see it after doing your laundry. But even then, only some fabrics create lint, mainly polyester and cotton fabric. In addition, some fabrics like spandex and lycra are more lint-resistant because of their elastic nature.

How To Prevent Lint From Clothes?

Preventing lint buildup while washing or drying is one way to keep those black pants in mint condition. Always keep in mind that lint develops from static, friction, and heat. If you can avoid all three, you won't have to deal with lint in your wardrobe.

Here are some handy laundry tips to keep your clothes lint-free;

a) Wash Clothing in A Cold Relaxed Wash

If possible, always wash clothes in cold water on a low to moderate cycle, for instance, the gentle or permanent press. This causes far less lint buildup compared to when you use intense heat or movement.

There's always that black sweater that we love so much, even though it's literally a lint magnet. Luckily you can combat lint by washing your clothes inside out to bypass the need to remove lint from clothes and minimize the shedding.

One way to sort clothes is to place the heavier clothes with zippers and buttons in a separate load. Zippers and buttons cause friction on more delicate garments while drying or washing, leading to the creation of more lint.

To reduce lint, always isolate any sweaters or blankets that you know produce plenty of lint. Wash these batches separately when washing everything else. Additionally, never wash your towels with your clothes; they are known to be notorious lint-producers.

The laundry dryer is where the most of the lint is formed since this is where the heat, static, and friction are in full force. An air-dry protects clothes from all three, plus it saves plenty of energy. If you can't air dry all the laundry you're doing, consider air-drying the relatively thinner garments to avoid them getting mixed up with the heavy sweater lint.

f) Get Rid of Lint In Your Dryer

Every dryer comes with a lint filter that's essential in trapping the lint that's lifted from wet clothes while they dry. It's also important that you keep the dryer's lint screen or lint filter clean otherwise, the lint will end up settling on your clothes because it really has nowhere else to go.

Additionally, keep your dryer vent system and the vents outside clean. This helps keep the airflow powerful enough to pull away from the lint from your clothes. As a bonus, it also helps prevent fires. If you don't use a liquid fabric softener while washing clothes, a dryer sheet can come in handy. To help reduce the static that holds lint on clothes, you can use a fabric softener or dryer sheet.

g) Have a Clothes Lint Remover

You must have a lint roller or lint brush in your closet, desk, purse, and car. For a quick touch-up, you'll need a clothes to brush; there is really nothing that works better.

If your outfit has a lot of lint and you don't really have time to wash or dry clean it, you can also use a lint brush plus clothes steamer. The dampness helps reduce the static that holds the lint tightly to the fabric.

Lastly, don't store lint-producing fabrics such as bathrobes and sweaters near the lint-attracting clothes. Keep the light-colored clothes away from dark-colored items.

How to Remove Lint from Clothes?

a) Using scotch or masking tape

Some common household objects come in handy when you need to remove lint. These include scotch tapes or any other sticky object like adhesive tape. Fold some of the tape around your hand to create two sticky sides. First, use one sticky side to remove the lint off the black clothing.

If you are removing lint on quite a large area, you could try using sticky contact paper or some adhesive drawer liners to help you remove the lint. Simply press and roll the paper off the clothes until all the lint is removed.

b) Run pumice stone over your clothes

You can also try removing the lint using a pumice stone. Traditionally, it's used to get rid of the dead skin off your feet, so pumice stones can also help remove lint on fabric. Pumice stones can easily be found at your local drugstore or online shops.

Before using it on a large area, first, try using the pumice stone on a small section of the black clothing. This helps you to make sure that the stone will not damage your garment in any way. Clothes made of fabric such as thin nylon or black silk may get snagged instead if you using a pumice stone on them.

Alternatively, you can also use the laundry dryer and a clean dryer sheet to help you remove lint on your fabric. Put it on the 'air only' cycle, throw in the fabric, and clean the dryer sheet into the dryer. It should come out lint-free after this.

d) Run the fabric through the washing machine

Another way to do this is to run your black clothing through a washer to remove lint. If the fabric is prone to shedding lint when washed, then turn the fabric inside out and run the wash like that. If the fabric is already covered with lint, then wash it the right side out to so you can remove the lint.

e) Use an anti-static spray

f) Use a sticky roller or clothes brush

When dealing with high-quality fabrics such as cashmere and silk or wool coat, a cloth brush or sticky roller is a must-have. Cloth brushes come in a wood handle with bristles made of boar or horsehair. They're natural — just not vegan.

Gently brush in one direction since this brush will lift lint, dust, and dirt off these delicate centerpieces. You can use a little power on heavy wool or corduroy fabric garments. You can also scrub or sweep in motions that work for your particular garment.

2. Use A Lint Roller

3. Use Some Distilled White Vinegar

As it turns out, distilled white vinegar in the house comes in handy here as well. It's great in removing lint as well. Add one cup of the white vinegar to your laundry rinse water in the final rinse cycle. This is another efficient way to get rid of all that pesky lint from bath towels and sweaters.

If all else fails, you can still consider using your trusty hair-dryer to help you get a nice and lint-free outfit. Simply dampen a dryer sheet, gently rub it on the lint-covered garment while you blow it simultaneously, at either room temperature air or its cool setting. Your hair-dryer can help you achieve a dashing outfit in seconds.

5. Use the Scouring Pad

Imagine that, scouring pads! That same scratchy green one that you use to scrub your saucepans and pots. That same one could also be used to get rid of the fuzz and lint on clothes. Dampen the scouring pad, soften it, and scrub off that lint like a pro.

Should You Rewash or Redry Clothes to Remove Lint?

Yes. If you have the time. Another round in the dryer or washing machine is a surefire way to shake off most of that remaining lint. Since lint-covered clothes are usually already clean, you can always omit the detergent and just stick to light or a normal wash cycle. If they're already dry, just run a cool, delicate cycle in your dryer. Remember not to include any major lint-shedders back in your rewash or dryer, together with the lint-prone clothes!

Frequently Asked Questions On How To Remove Lint From Black Clothes

1. Why do most black clothes attract lint?

When the lint comes from that same garment, then it's probably due to the movement of the fabrics when the garment is laundered or worn. The movement you use could cause small fibers to come loose, and it's not such an unusual thing. It happens to all fabrics; the only difference is that they do more than others.

2. Why are my black clothes coming out with white marks?

If the washing machine uses extremely cold water, the detergent might not dissolve so well. This results in white 'clumps' or residue of the undissolved detergent on the garment. This means that the water shouldn't be as cold, just room temperature at least.

Best Countertop for White Cabinets for Any Remodeling Project

What Does an Architect Do? Main Roles of Architects