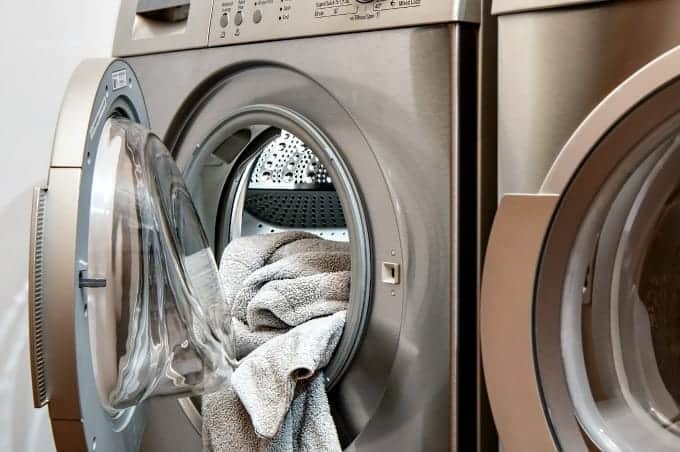 How to Get Rid of Mildew Smell in Clothes and Closets

When doing laundry, there is a common problem we have all encountered, and it's the musty smell that comes from different situations. For example, the mildew smell can come from forgetting laundry in your washer after having a long day, hard water, a dirty washing machine, or taking too long before you wash your used gym clothes.

With an average schedule, mildew smells are bound to seep into your clothes and homes, and while this can be frustrating, it doesn't have to be permanent. However, a normal wash will not do the trick for the really tough odors. Therefore, if you wonder how to get rid of mildew smell in clothes, we have listed several ways to tackle this problem.

Mildew is a fungus that develops in damp clothes or areas with trapped moisture. Some of the best conditions for fungal growth are organic fibers like in clothing and towels.

Mildew, moldy and musty odors are among the toughest odors to get rid of once they set. The smell might fade over time if left alone, but most likely, the smell out of clothes will not go away on its own.

What is the Difference Between Mildew and Mold?

Both mold spores and mildew and their chemicals are not the best for your health and the indoor quality in your house. Although the two terms are used interchangeably, EPA states that mold and mildew are not the same things.

Mildew is a type of fungus that looks yellow or grey with a powdery texture, and it refers to what grows flat and remains on the material surface. The laundry will not have visible mildew spots in some cases, but it will have a musty smell. Mildew grows with high moisture levels, such as window sills and shower walls.

On the other hand, mold is brown, green or black fungi that look fuzzy or slimy found outdoors and indoors. There are many species of mold ranging from tens of thousands to about three hundred thousand or more. Mold grows in a dark, warm and damp environment, and it's tougher to remove as the green, or black growth could leave stains.

Methods of Getting Mildew Smell Out of Clothes

Plain white vinegar is a natural, safe way to remove unpleasant odors from your laundry, and it will also remove mildew smell. Distilled white vinegar contains acetic acid, which is suitable for neutralizing the base properties of most odors, including mildew odors.

In addition, white vinegar is a great laundry detergent substitute since it kills the odor-causing bacteria and strips away product buildup that could be in your mildewed laundry. You can use half your usual detergent and combine it with vinegar so long as the laundry detergent is not made from a bar of natural soap.

White vinegar breaks down fats in natural soaps like castile soap, making both ineffective if combined. Other users wash musty bath towels using hot water and a full cup of distilled white vinegar, and no detergent to remove the odor.

Vinegar and baking soda will kill mildew and mold, but they attack different strains of the odor-causing bacteria. If you have already tried using white vinegar to remove the mildew smell from clothes and still have a musty odor, add half a cup of baking soda to the washing machine and run the wash cycle using the hottest water possible.

After washing with baking soda, adding some white vinegar into your rinse cycle might help leave your clothes smelling fresh.

You can use an enzyme odor remover for mildew smells caused by body odors or sweat. For instance, if you leave your damp workout clothes in your gym bag, the mildew and body odor combination make removing the musty smell from your clothes extra difficult.

Opt for a product with enzymes for destroying odor and add it to your wash cycle. Some commercial laundry detergents contain odor-fighting enzymes, or you can purchase a laundry booster bottle to use in addition to your regular detergent.

If the weather allows you to, air drying is perfect for removing the mildew smell from clothes. Sunrays kill microbes that cause mold smell, and the breeze of fresh air helps improve airflow to all the areas of your clothes. In addition, air drying can be combined with other methods instead of dryer sheets to improve the smell of mildewed laundry.

However, using sunlight has a disadvantage of a bleaching effect which over time your clothes may lighten, making them look old. In addition, sunlight may damage some fabrics with repeated exposure which might tear synthetic fabrics like it makes plastic brittle. The odor removal power of sunlight works best on natural fibers such as cotton.

Another classic odor remover is Borax, where experts recommend pretreating the heavily soiled clothes and musty towels. Like vinegar and baking soda, Borax removes mold without emitting harsh fumes or chemicals and will safely get a mildew smell out of clothes.

To use this method to remove the mildew smell out of clothes, you will need half a cup of Borax and a cup of hot water. First, soak your garments in a tub of hot water and a half cup of Borax for an hour before you perform your normal wash.

In addition, you can use oxygen bleach as a pre-treatment for deep cleaning. Pour a little amount of the oxygen bleach directly into your clothes and allow it to sit for a few minutes. Then, scrub it using a brush or a sponge before putting it in a washing machine.

Can You Prevent the Mildew Smell on Clothes?

Yes, it's possible to prevent musty smells from affecting your clothes, and the most intuitive way is staying on top of your laundry. Don't allow your dirty laundry, damp towels and sweaty clothes to pile up in the hamper. Other ways to get mildew smell out of clothes include:

1. Hang the Damp Clothes to Dry Right Away

Whether it's the towel you used after your shower or your workout gear after a particular workout session at the gym, don't leave your workout clothes on the floor or in your laundry room or laundry basket. Instead, hang the musty towels and clothes over a shower rod or in the hanging line before you take them to your laundry basket or room. Piling up wet clothes causes them to stay wet longer, giving mildew a better chance of growth.

2. Use the Recommended Amount of Detergent

Overusing laundry detergent in your wash cycle might cause a buildup of soap suds which never completely rinse out during the wash. In addition, the detergent residue will trap moisture, feed the odor-causing bacteria, and leave even your clean clothes with a funky smell, causing a musty closet.

Ensure you measure detergent carefully or use a detergent dispenser to avoid adding too much whenever you wash your clothes. Follow the guidelines on the packaging to know how much you will need to add, and when in doubt, reduce any excess detergent.

Fabric softeners are used for making your clothes smell fresh and feel soft, but when used on stretchy and synthetic workout clothes, they can leave a slick residue that could be impossible to remove. This residue prevents water from penetrating the fabric, and this means that your clothes, even when clean, will have mildew odors.

Avoid using fabric softener when your clothes smell musty, as the residue from fabric softener can build up over time and make your musty smell problem worse. In addition, the fabric softener residue will promote bacteria growth the same way it might when using too much detergent.

4. Dry Your Clothes Immediately After Washing Them

Remove your garments from the washing machine immediately after it finishes running, as leaving them in the washing machine could create unpleasant odors. In addition, it could cause them to develop mildew in a few hours or sooner if the weather is hot and humid.

To have odor-free clothes, move them to a dryer or line dry them as soon as you are done with the rinse cycle. In addition, if you accidentally leave your laundry in your washing machine for long, you should run them through another cycle using vinegar and baking soda to get mildew smell from clothes.

If you think your washing machine is the problem, put a rag in hot soapy water, clean the gasket around the door, and clean any detergent dispenser. Next, pour one cup of 240 ml bleach and a cup of baking soda, then run a regular cleaning cycle in your washing machine.

Add half a cup of an enzymatic detergent to extra stain and odor removal or deep cleaning. In addition, to prevent mildew from forming in your washing machine, leave the washing machine open after each cycle. This will allow your machine to completely dry out but always remove wet clothes immediately after you are done.

Before you remove mildew smell, there are several things you can keep in mind: