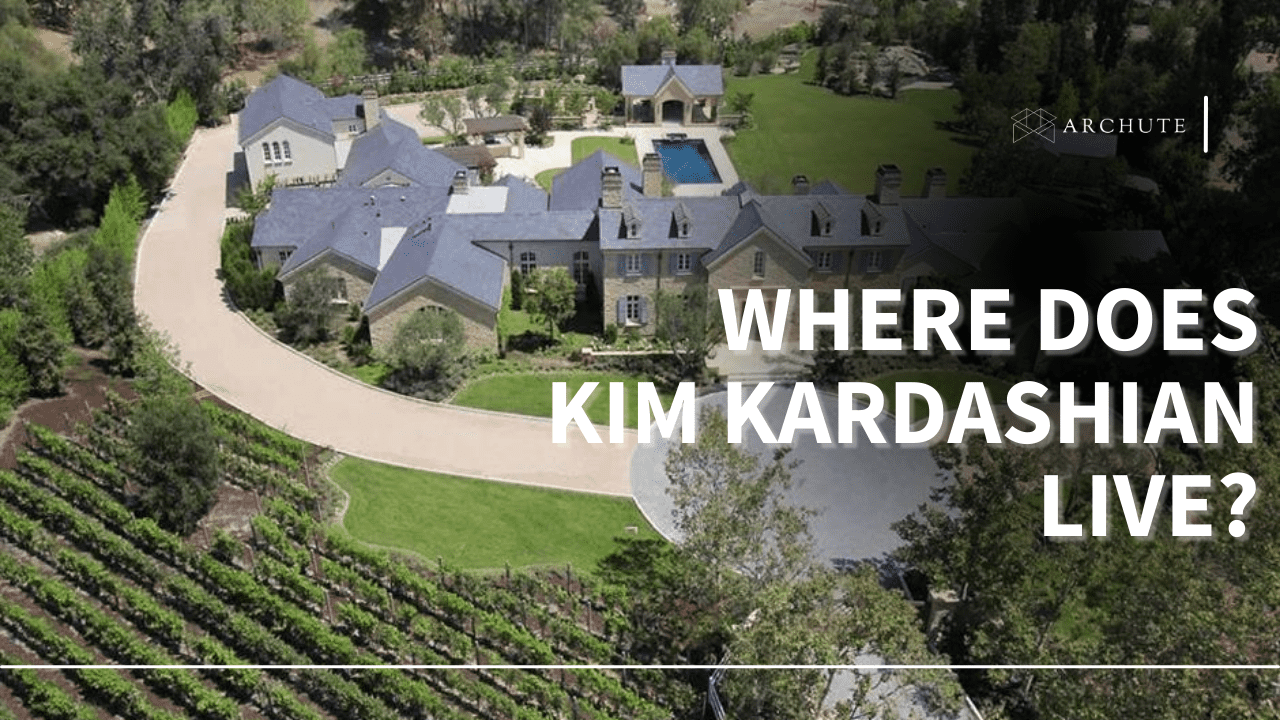 Kim Kardashian has many properties to boast about, and every one of them comes with head-turning features building her real estate empire. Moreover, after developing multiple multimillion-dollar businesses, it’s no surprise that Kim Kardashian’s property portfolio is impressive.

Although Kim Kardashian constantly shares moments from her life online, she hardly shows videos or pictures of her home. Luckily, we have compiled Kim Kardashian’s houses and those she has lived in. Let’s marvel!

Who is Kim Kardashian?

Kim Kardashian is a household name and one of the world’s biggest celebrities, with over 100 million followers on Instagram. She has an estimated net worth of $1.4 billion from reality TV deals, sponsored posts on her social media accounts, and the companies she founded, like KKW Beauty and Skims shapewear.

She was married to Kanye West. Kim and Kanye West have four children, North, Chicago, Saint, and Psalm, who they co-parent after the divorce.

Kim Kardashian was raised in the beautiful surroundings of Los Angeles with her momager Kris Jenner and the late lawyer father, Robert Kardashian, alongside her siblings Kourtney, Khloe, and Rob.

Before her parents split, the Kardashian-Jenner family lived in a Beverly Hills mansion which they later sold in 1994 for a huge $1.5 million.

Where Does Kim Kardashian Live?

In recent weeks, Kim Kardashian has been making big changes to her property portfolio. First, let’s look at some of her luxurious homes.

The Hidden Hills mansion is Kim Kardashian’s marital home, and she once shared it with her ex-husband Kanye West. The eight-bedroom, 10-bathroom house is huge and has a unique aesthetic from Kanye and a Belgian designer and antiquarian, Axel Vervoordt.

Kim Kardashian’s living space area has two sofas facing each other, and there’s a grand piano located next to floor-to-ceiling glass wall-to-windows.

There is also a private sitting room in her bedroom, where she loves to sit, enjoy tea and write letters to her kids.

The Hidden Hills property has an immaculate kitchen, a large kitchen island, and empty countertops free of clutter.

The Skims founder prefers to keep her house clean and tidy with no stainless steel appliances or signs indicating cooking.

There is a round dining table off the kitchen and a large sofa with living space on the other side.

The Kardashian family has unique double sinks in this home which appear to have faucets but no basins. Instead, the counters have a slight slope that, when water hits it, flows into a slot at the edge and acts as the drain.

The Hidden Hills estate also has a backyard basketball outside her glass-walled home gym, matching the neutral tones in her home in black and gray colors. In addition, the surface of the court is made of soft sponge-like material to prevent their kids from getting hurt while playing.

They have also installed a large body of water as if the two pools are not enough.

The Malibu mansion is Kim Kardashian’s latest purchase. She bought this Malibu beachfront from Cindy Crawford and her husband, Rande Gabler, at about $70.4 million. It was also previously owned by Yellowstone star Barret Swatek and her husband, Adam Weiss.

The four-bedroom, six-bathroom house is the largest Malibu deal of the year, and it’s ranked as the highest sale in California in 2022.

The Malibu estate home spans 7450 square feet over 3 acres of land and has beautiful views, expansive decks, and several terraces great for entertaining. The oasis is big enough to accommodate the whole Kardashian-Jenner clan, including sister Kourtney, Khloé, Kendall, Kylie, mom Kris, brother Rob and, of course, all their kids.

The home includes a gourmet kitchen with a breakfast bar.

The master bathroom is quite spacious and has a gorgeous tab.

The house also has a private path to the private secluded beach. The Malibu home is surrounded by mature trees, including palms, giving the home a serene yet natural feel.

The Mediterranean-style home has two stories and a red roof. The main floor of this stylish, spacious home features a great space that unites the living room, den, dining area, and gourmet kitchen.

The wraparound deck with a firepit is accessible through floor-to-ceiling sliding glass doors that display views of the ocean, beach, and coastline. There is also a three-car garage which gives enough space for guest parking.

Where has Kim Kardashian Previously Lived?

After Kim and Kanye made their relationship official in 2012, they bought their first home in January 2013.

As Kanye West has specific tastes, the Bel Air property underwent many renovations where everything was ripped to the gutter.

The 9000-square-foot home had six bedrooms and eight bathrooms.

Kim and Kanye sold this mansion to Ukrainian billionaire Marina Acton for $17.8 million in 2018, who sold it a year later for $14 million.

This is an additional Hidden Hills property that Kim and Kanye West bought in 2019 for $ 3 million, but Kim is hoping to sell this home.

The 1950s ranch home sits on 1.5 acres and features four bedrooms and four bathrooms on one level. It is also an open floor plan with a center island kitchen with granite countertops, a two-sided fireplace, and a vaulted ceiling.

The 4-bedroom home is adjacent to the main residence, making it a part of Kim’s estate. Nevertheless, Kim has never lived in this residence with her four children.

Although the four-bedroom house might be exciting for many, Kim and Kanye were mostly interested in the equestrian facilities found on the 1.5-acre property.

It also has a spa, a swimming pool with a water feature, a built-in barbecue, a covered patio, and a four-car garage.

In 2017, Kim Kardashian bought this three-bedroom, four-bathroom property in Calabasas.

Architect Vincent Van Duysen remodeled it as her birthday gift from her ex-husband Kanye West. The home featured a minimalistic aesthetic similar to the decor in her current house.

The property includes an open-concept living space with a gourmet kitchen, a covered deck, and an extra outdoor area.

There is also residential access to amenities like the pool, spa, fitness center, guest parking, and barbecue area.

Kim Kardashian’s first home was this five-bedroom, five-bathroom Beverly Hills which boasts a European aesthetic with a swimming pool cave in the backyard.

This would be where Kim’s second husband, Kris Humphries, proposed to her in the primary bedroom, and they ended up moving in.

The other Kardashians, including Kourtney and her mum Kris Jenner, also have holiday homes in this area.

Kim Kardashian also has revealed she has enlisted other popular Japanese architects to design another one-of-a-kind home in a lakeside location that is still a secret.

Conclusion on Where Does Kim Kardashian Live

Today and age, you have probably heard about the Kardashians as high-profile celebrities who have been in the digital hemisphere since 2007, thanks to their reality TV group. So, if you are curious to know Kim Kardashian’s real estate portfolio, we hope we have helped you get a vast idea of her life.