Where Does Putin Live? The Homes of the Russian President

It’s natural to be curious about where the leader of the largest country in the world lives. The interesting thing about the question, “Where does Putin live?” is that it doesn’t have one answer.

Nonetheless, we've got you covered whether you’re looking to visit Russia, want some extra information on the nation’s leader, or are just curious about Putin’s real estate tastes.

We’ll look at Putin’s several homes and why they stand out in their own way. Although some of his residences have some controversy, you'll be fascinated by their architecture and story. 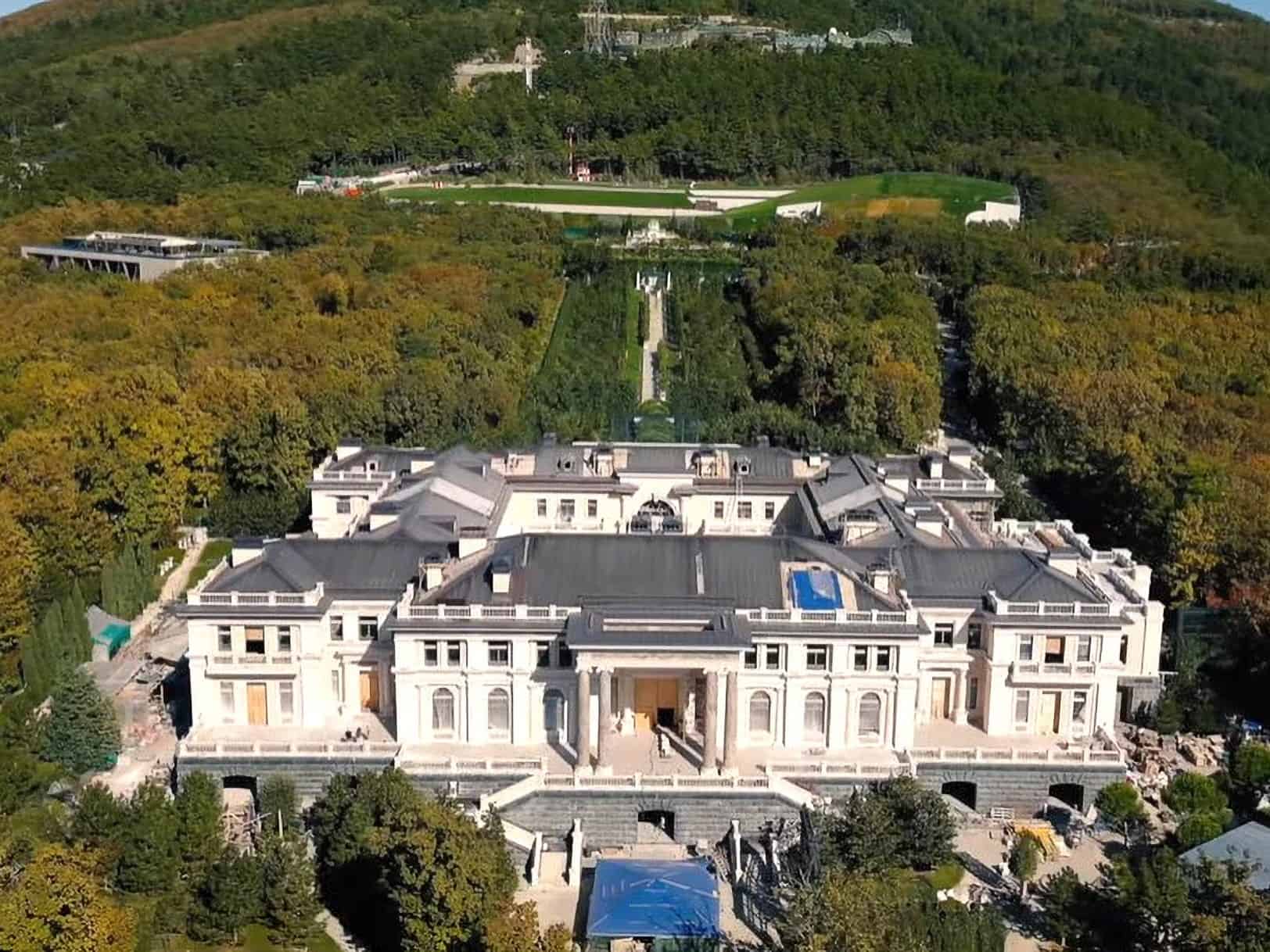 Putin's Palace is one of the most controversial of all of the residences owned by Russian President Vladimir Putin. This luxurious palace is built off the Black Sea within Putin's estate. The entire estate is said to sit on land that is 39 times the size of Monaco.

Italy’s Lanfranco Cirillo designed Putin’s Palace. Although there are many great architects worldwide, this is the go-to architect for Russia’s elite.

This Italian-style mansion is three times bigger than the White House and houses 11 bedrooms and other cool features.

Some notable features of Putin's Palace include a helipad, teahouse, amphitheater, vineyard, and casino. Although none of these features are confirmed to be part of the estate, we got a pretty good idea of what this massive estate houses from the viral video published by Alexi Navalny.

Given its luxurious nature and the amount of land it sits on, it is no surprise that this home is worth over $1 billion. However, it is worth noting that Russian Putin has denied owning the palace.

The ornate living room comes complete with gold furnishings, as shown in the image below. To say that the house drips with luxury would be an understatement. The elegant dining room is designed to entertain heads of state with its abundance of seating areas and luxurious design.

Here's a snippet of the dining room. This seaside palace easily takes its place as one of the most expensive palaces in the world. Construction work began in 2005, and the palace has undergone major renovations since then. The main cause of the renovations has been an ongoing mold infestation.

Nonetheless, this home to Russian President Vladimir Putin stands strong and boasts many incredible features. For example, the ornate reading room was inspired by the Kremlin's Georgievsky Hall.

Here are some features and rooms worth noting.

The design of this home to the Russian President Vladimir Putin boasts of high ceilings, polished marble flooring, and classical-style frescos. There's even a beautifully carved wooden fireplace that will leave you in awe.

The attention to detail in the craftsmanship is also unparalleled and shines through the incredible plasterwork and well-done walls and ceilings. The Bas-relief sculpture of Poseidon and the Grecian-style busts would leave anyone in awe. This palace is definitely fit for the president of Russia.

Russian President Vladimir Putin spares no expense in impressing his dinner guests. The dining room of this palace is elegant and flashy, with an abundance of gold leaf designs.

The chairs are arranged in a P-formation, and the style of the flamboyant furniture is inspired by Louis XIV. Louis the Great is one of Vladimir Putin's favorite people.

The lounge is also adorned with similar gold leaf designs found in the dining room. This place allows Russian President Vladimir Putin to relax and chill.

In addition to the beautiful gold leaf designs, this lounge has a stunning golden chandelier that acts as the centerpiece of an incredibly beautiful ceiling.

Would Vladimir Putin's home really be complete without an indoor pool? We think not.

This pool is covered in wall-to-wall marble that would be the envy of anyone with an eye for good things. Everything about this place screams posh.

The imposing columns and luxurious tiling also add to the whole vibe. You can almost imagine the Russian president walking here for a morning swim before running his country.

Although this is not Putin's official residence, this home would not be complete without a presidential office.

This presidential office houses a beautiful marble fireplace and an intimidating T-shaped desk that screams business.

Although this estate has other amenities, including an ice hockey rink, helipads, restaurants, and more, the church stands out with its incredible design.

Although this unique church was constructed at the same time as the rest of the buildings on the estate, this Byzantine-style Russian Orthodox church looks like it's been here for centuries. This is mainly due to its traditional design. 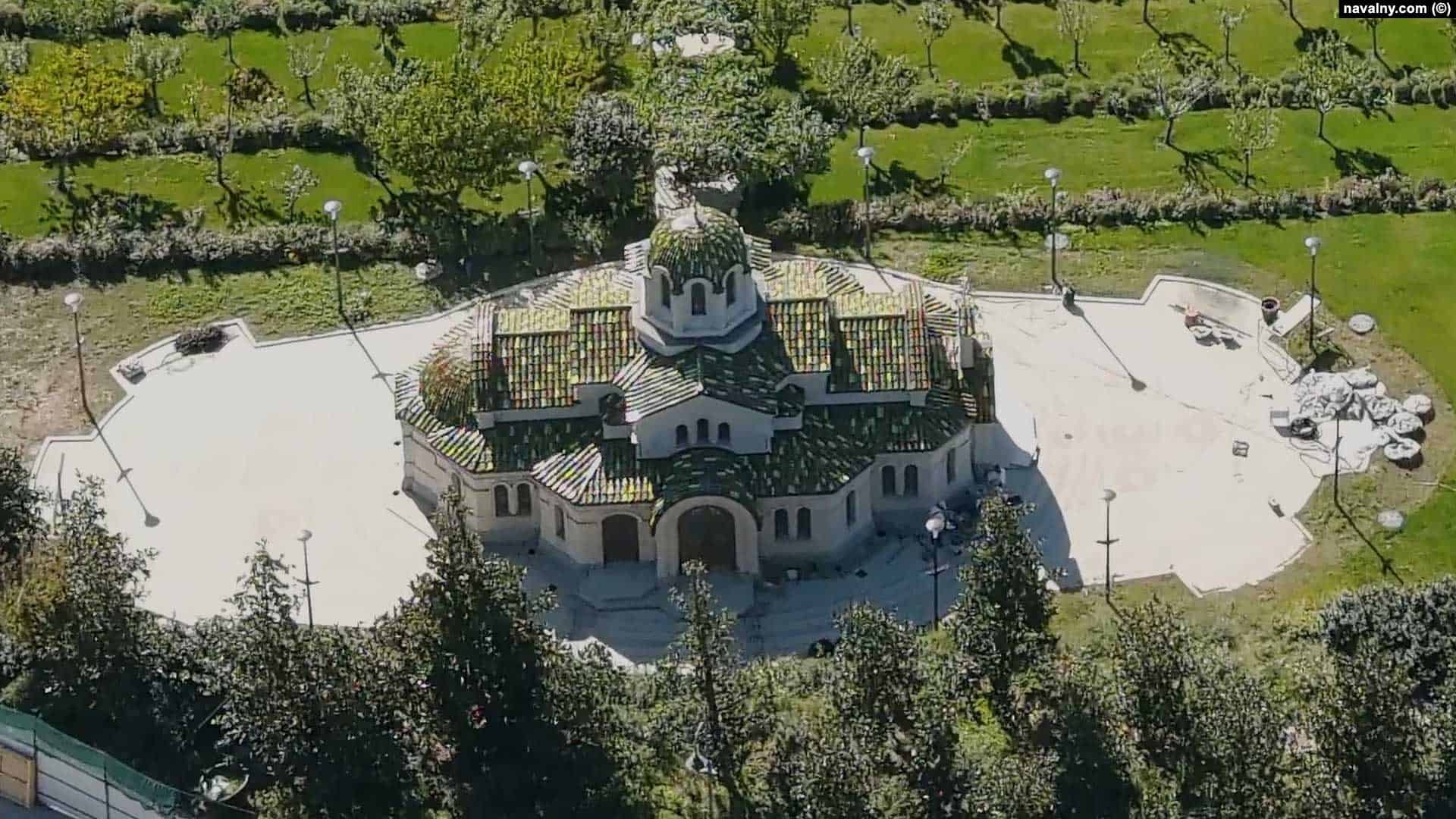 Although there have been many controversies surrounding this home, we can't deny that it is a masterpiece. It speaks to Vladimir Putin's personality and gives us a sneak peek into the man and leader he is.

Now that we've covered the main attraction when it comes to the homes of president Vladimir Putin let's look at some of his other residences. 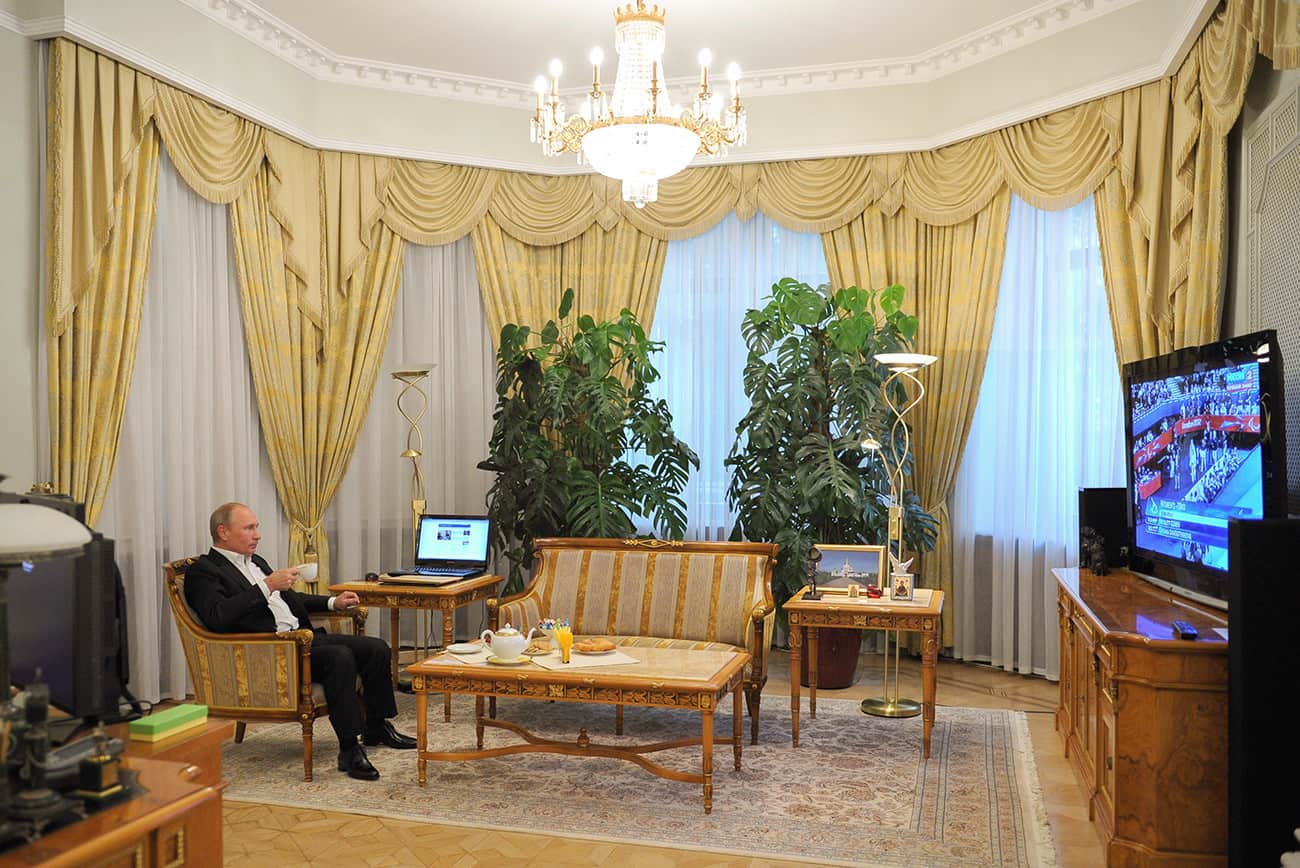 Of all his apparent residences, this is the one that Russian President Vladimir Putin calls home.

Novo-Ogaryovo is Putin's official residence and is located in the western part of the Moscow region. It is near the capital, which is great for convenience's sake.

Although he doesn't personally own it, this home became the official residence of Vladimir Putin in 2000 and has remained so ever since. Putin chose this estate as his residence in 2008 when he left office. The main house of this great estate was built in the 19th century by order of the Grand Duke Sergei Alexandrovich.

The Grand Duke was the brother of Emporer Alexander III.

The Moscow Kremlin was built in the 15th century and is known for its crenelated red brick wall and impressive 20 towers. 19 of these towers have spires.

The Grand Kremlin Palace was the official residence of the Supreme Power back in the 13th century. During this time, it was the center of the spiritual and temporal life of the state. 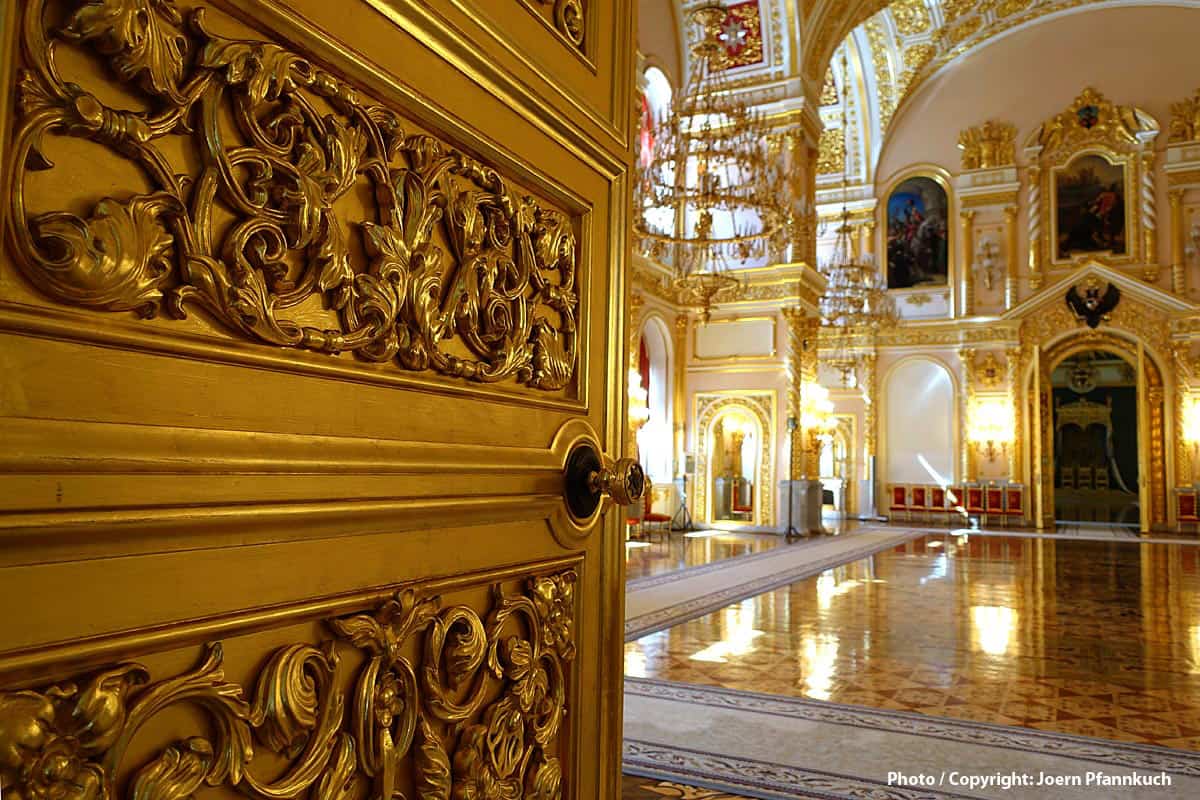 The Russian Federation's office is located in the Kremlin Senate. The Kremlin Senate is is a historic building that was built by order of Catherine the Great. This was between the years 1776-1787.

So, where does Putin's residence stand within the walls of this great palace? Vladimir Putin's office is located in the center of the building's North wing. Again unlike the White House, Putin's office is rectangular in shape.

The design of Putin's office is noteworthy, with 2 huge chandeliers acting as a centerpiece of a beautiful and ornate ceiling. This office is also inlaid with oak panels. Putin doesn't live here but can pop in whenever he wants. 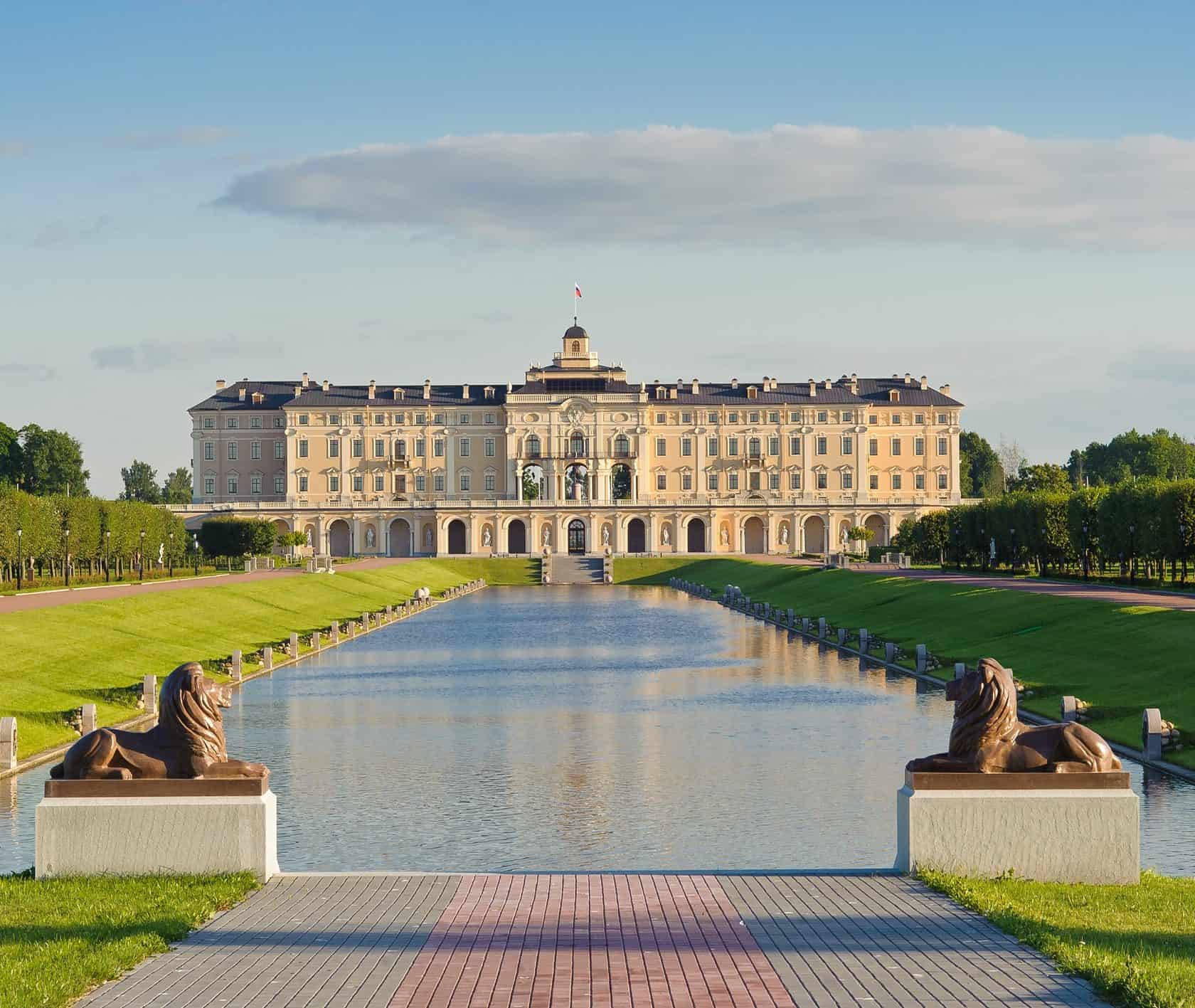 Here's another one of Putin's palaces that is a sight to behold.

The Konstantin Palace is located on the Gulf of Finland and is 20 kilometers from the center of St. Petersburg. An interesting fact about this palace is that it was formally the home to the Romanov Family. 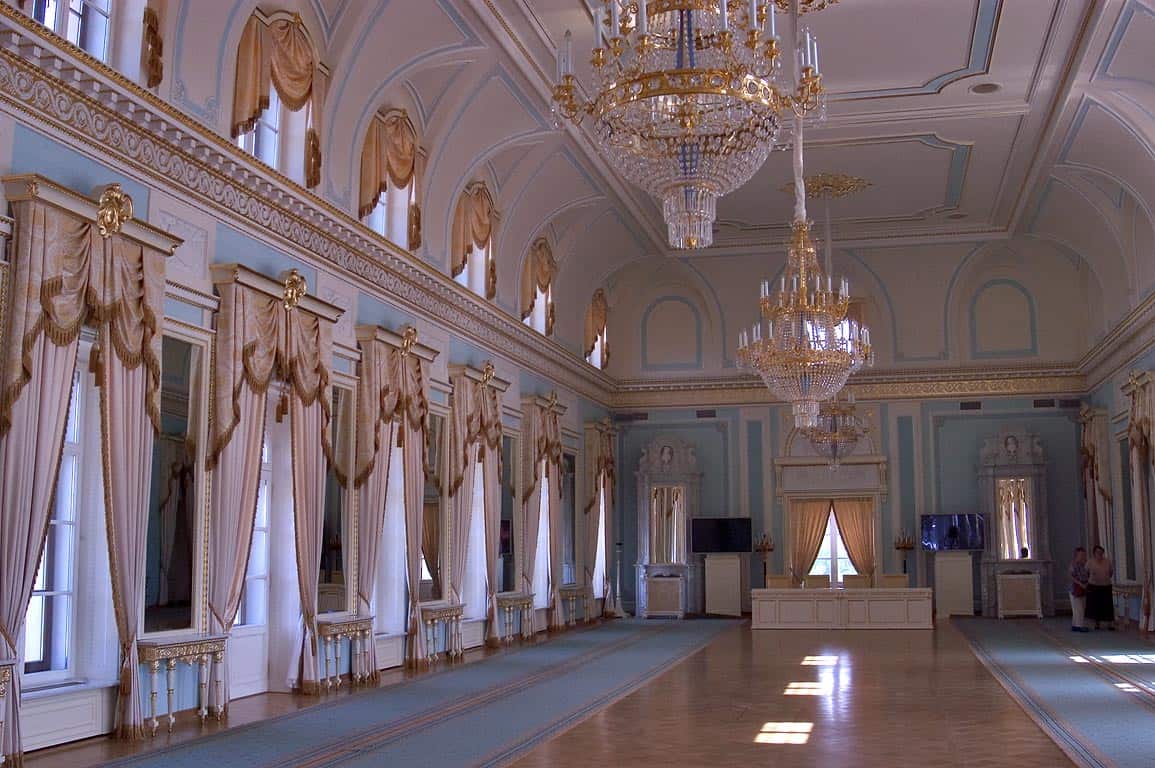 Unfortunately, it was severely damaged during World War II. However, fortunately for Putin, the restoration process began in 2000.

Although it is one of Putin's residences, the Russian President only uses it for state events. For example, the Konstantin Palace was the venue for the G-8 Summit in 2006 and the G-20 Summit in 2013. 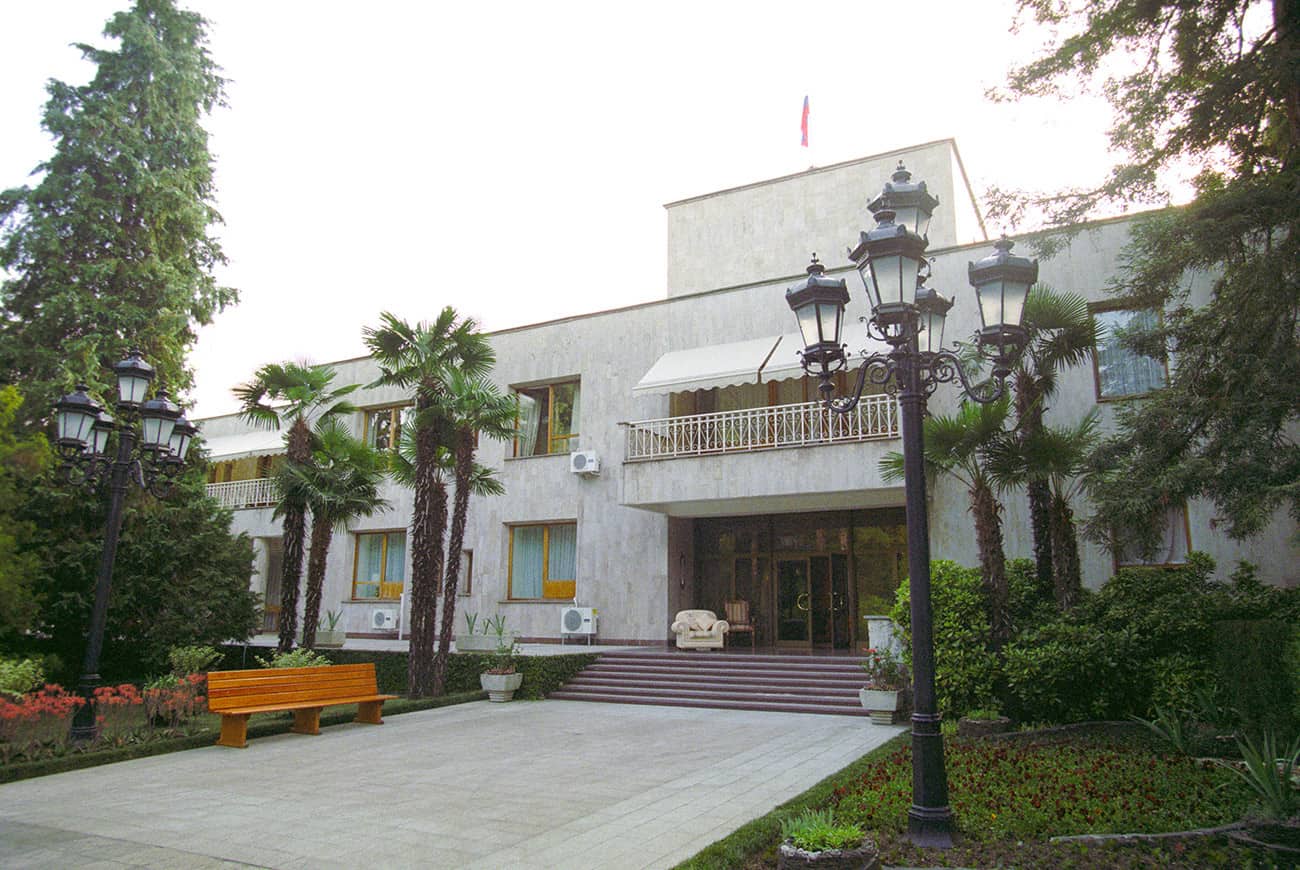 This is Putin's official summer residence.

It is located in the impressive Tsentralny City District of Sochi and is apparently the only dacha on the Black Sea. A dacha is a cottage or country house in Russia.

Vladimir Putin often uses this residence as a holiday home. 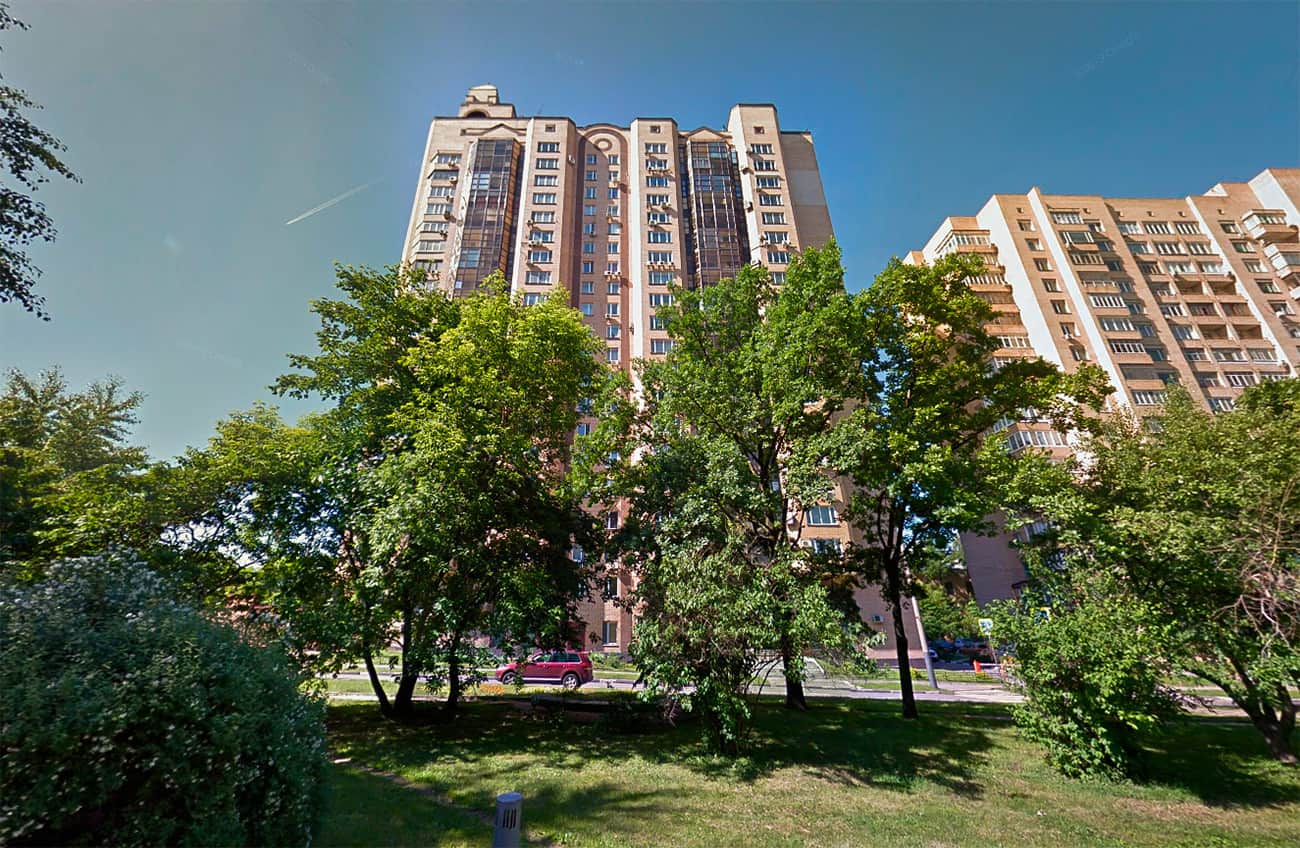 This is Putin's government-leased apartment. Boasting a size of 153.7 square meters, this apparent was allocated to him while he was the Prime Minister of Russia.

This was back in the 1990s, but he continues to keep it as one of his residences. 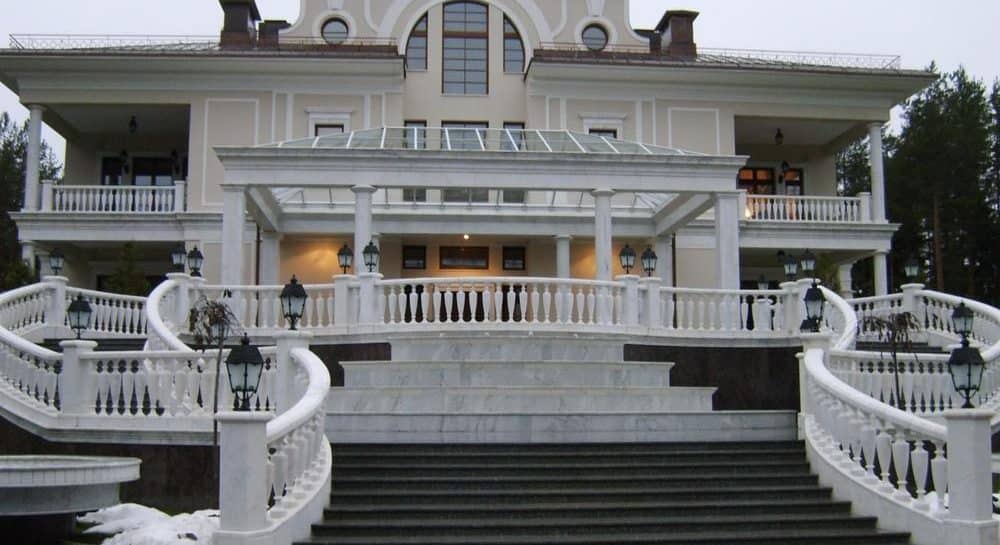 This Putin residence is located in the Novgorod Region of Russia and goes by other names. Some of these names include Dolgiye Borody, Valdai, and Uzhyn.

Putin inherited the right to use this house when he inherited the reigns of the Russian kingdom. This home was completed in the 1980s and serves as another summer home for Putin. 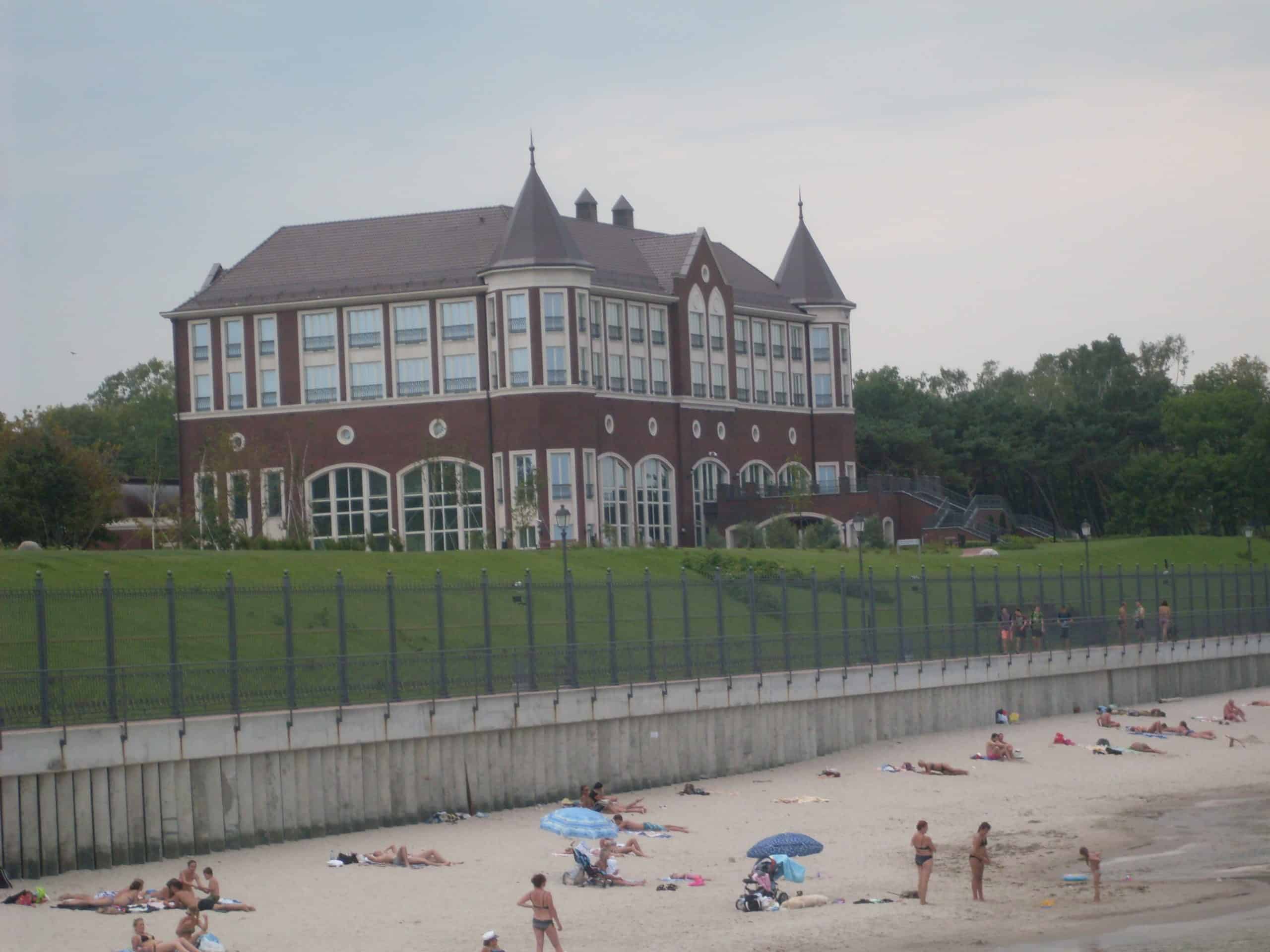 Finally, we have this presidential residence that was built on the spot where Otto von Bismarck (the first Chancellor of the German Empire) had his palace.

This residence was completed in 2011 and was first opened by the then president of Russia - Dmitri Medvedev.

Unlike many of our features on celebrity homes, this piece is slightly different because we're dealing with a president. This means that he does not own some of the homes we've featured here. Nonetheless, we hope you got a glimpse of Russia's president's architectural tastes.

If you truly want to know what Putin likes regarding architecture and real estate, focus on our first home - Putin's Palace.

Although there are several allegations that this home was part of a corruption scheme, and Putin's been quoted saying that he doesn't own the home, it is the best shot at getting into the mind of Russia's president when it comes to architecture and design.

Let us know which home you found most interesting. 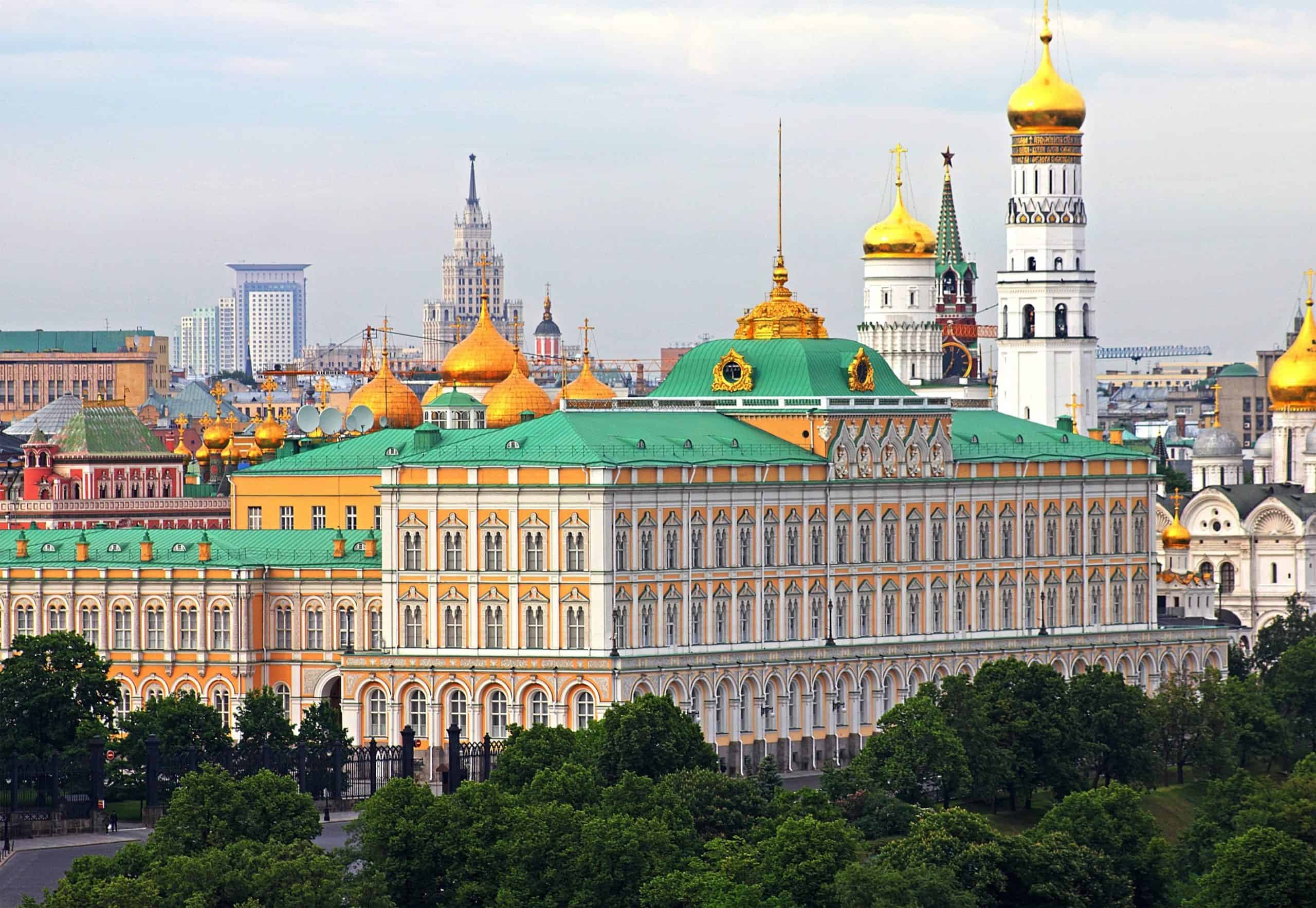 1. Does Putin have a house on the Black Sea?

Nonetheless, the most common answer to this question is often Putin's Palace, known to many as Putin's home.

Putin's Palace sits on an estate that is said to be 39 times the size of Monaco. The construction process for this home began in 2005, but it has experienced several reconstruction phases due to a mold problem.

If you are struggling with the same problem, check out our article on how to remove mold from carpets for some important tips.

2. Where is the residence of the Russian president?

The official residence of the Russian president is the Grand Kremlin Palace. This is where official events are healed, and the president's office is located in the Kremlin Senate.

Putin's office is located in the center of the North wing of the Kremlin Senate building.

However, the Grand Kremlin Palace is not Putin's official home, although he can stay there whenever he wants to. His official residence is the Novo-Ogaryovo, located in the Moscow region.