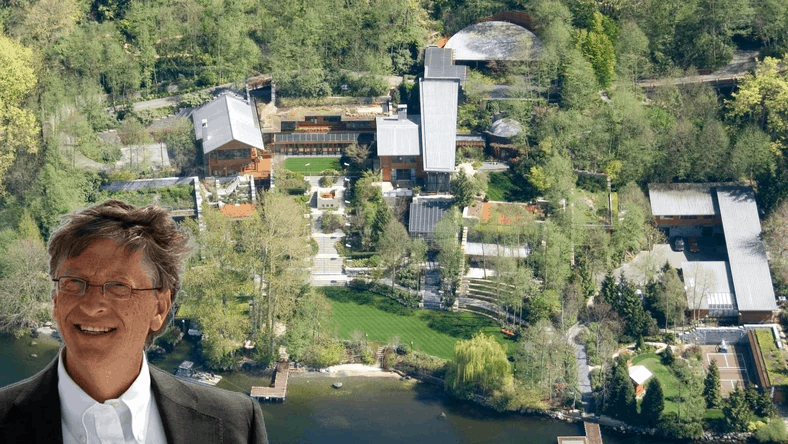 Posted at 18:31h in Features by Ian Mutuli 0 Comments

Bill Gates is one of the wealthiest people on earth right now, with an estimated net worth of over $129 Billion. He is world-renowned as the Microsoft Corporation's co-founder, a businessman, a philanthropist, among many other titles he holds. It, therefore, comes as no surprise that Bill Gates house is worth 0ver $130 million with $1.155 million annual payable property tax.

The 66,000 square foot mansion is located in a Medina suburb of Washington, standing tall over Lake Washington in Medina. It was designed by Bohlin Cywinski Jackson and Cutler-Anderson Architects, who also designed one for Steve Jobs. The house cost the businessman over $63 million to complete. Its construction took seven years before completion in 1995.

The mansion is a work of art and class, with features that leave guests in awe. Bill Gates has himself termed the house as 'the coolest house of all time.' By calling it the coolest, he could mean its features or that the house is kept exceptionally cool by its natural surroundings.

The house is called Xanadu 2.0, a name derived from Charles Foster Kane's fictional home from Citizen Kane. This article will explore the most interesting facts about the house, from the exterior to the smallest features that set it apart from others in the country.

Table of Contents
Bill Gates House Exterior Architecture
1. It is an earth-sheltered house
2. It has a private tunnel entrance
3. It is surrounded by lots of water
4. Trees play a significant role
5. The house has enough parking space
The Mansion's Interior Architecture
1. It is a smart home
2. The house features a 2,100-square-foot library
3. The house features a plush home theatre
4. It features a large reception hall
5. The exercise facilities include a trampoline
6. The mansion has many rooms
Other Facts About Bill Gates House
1. Construction workers tested the concept of the home's high-tech construction on a guest house in the complex
2. The complex needed a large number of workers to complete
3. A single tour of the house can cost $35 000
4. The lot did not cost bill Gates a fortune
5. Bill Gates has hosted a party for Governers in this estate 1. It is an earth-sheltered house

The first prominent thing you will notice about this house is how eco-friendly it looks. It is surrounded by trees that help regulate the heat around it. This property is, in better terms, an earth-sheltered house.

The mansion followed a Pacific Lodge-style architecture and was constructed using natural materials from the Pacific Northwest region. This mansion needed half a million wood logs from 500-year-old fir trees to complete the rich eco-friendly look.

2. It has a private tunnel entrance

The house's entrance is through a private tunnel constructed in 2006. It connects the mansion to the Highway 106 to allow Bill and Melinda's guests easy access to the house. This tunnel, as with many other Bill Gates properties, was paid for by Watermark Estate Services.

Visitors can either walk the 84 steps down to the ground floor or just take the elevator from the entrance.

3. It is surrounded by lots of water

The Xanadu 2.0 gives fantastic views of Lake Washington and the Medina skyline and boasts 475 ft of the lake's waterfront. Apart from this natural water body, the house also features artificial streams and estuary systems that add to the complex's class. 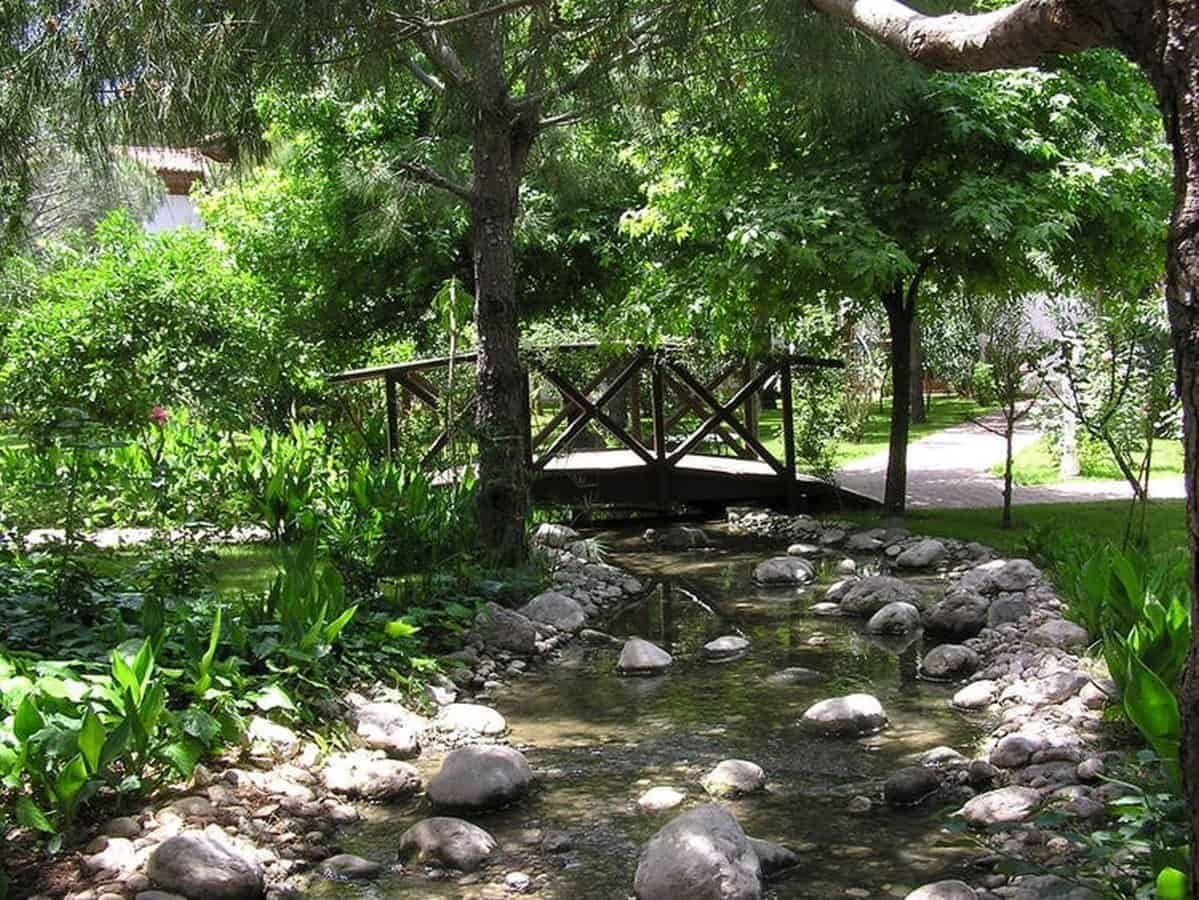 This stream has so far found inhabitants in salmons and trout, which only adds to the mansion's eco-friendly nature. The stream was designed to prevent runoffs that could be caused by the mansion's very high walls.

The complex also features a 6o-foot long swimming pool that boasts an underwater music system with a glass wall and great views of the lake and city. Another outstanding feature of this complex is a private beach. Its sand is not native to Washington and was imported from the Caribbean and completes an eccentric water experience for this family and guests.

With the critical use of trees to cool this mansion, it is imperative to make sure they are well taken care of. It is believed that Bill gates even has a favorite maple tree that gets watered electronically every 24 hours or any time in between if it shows signs of dehydration.

5. The house has enough parking space

As expected of a house with a private tunnel from the highway and belonging to one of the world's best business magnets, Bill Gates house ought to have enough parking space. It does not disappoint, as the mansion features various garages that can park a total of 23 cars at the same time.

These garages feature at strategic points in the complex, with an underground one made of concrete and steel to resemble a cave. It can hold at least ten cars. 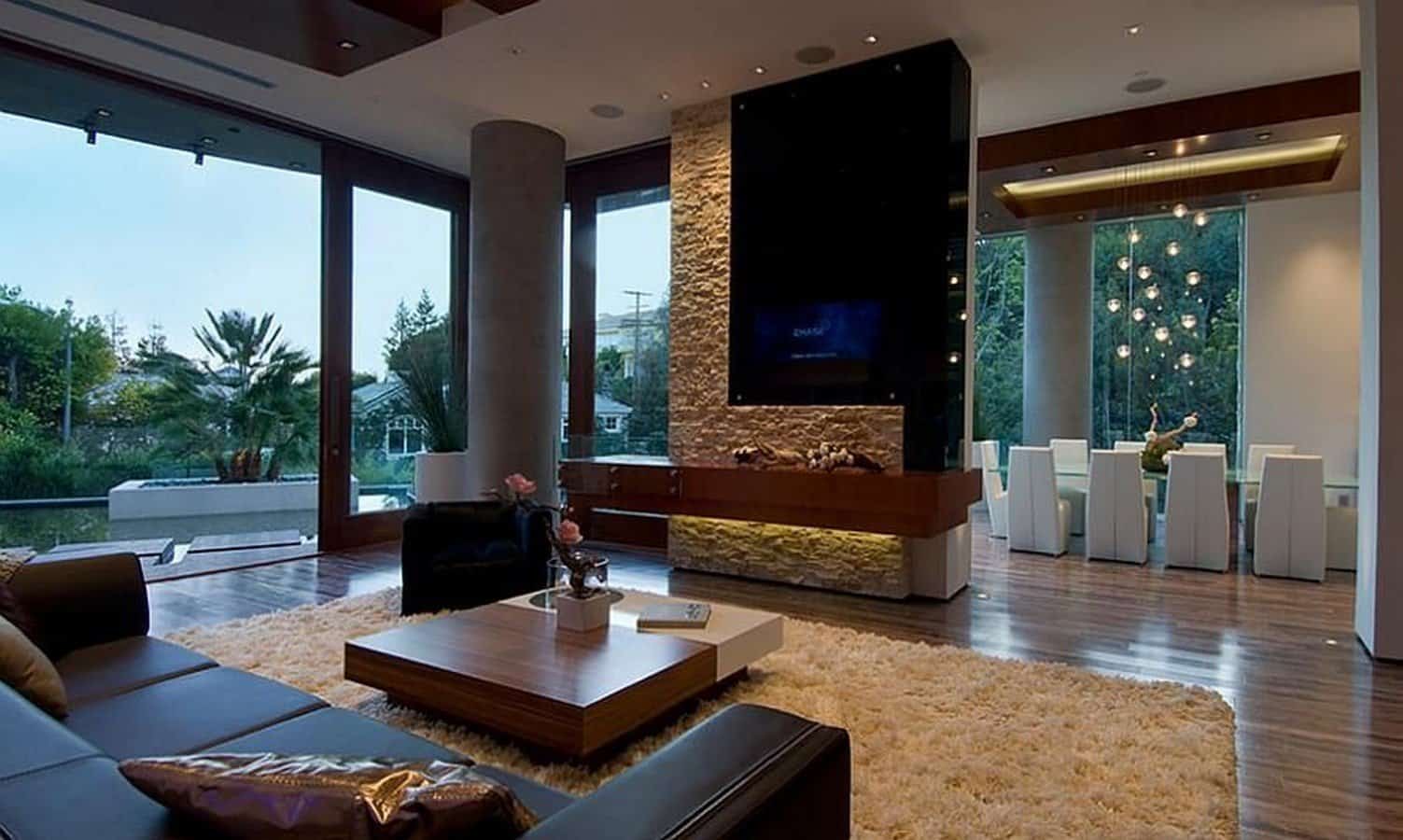 While smart homes are on the rise now, it is hard to imagine that Bill Gates has had a smart home since 1995. The house features a very high-tech sensor system to control the most crucial functions like temperature, lighting, and entertainment.

When guests enter this complex, they get a pin they can use to enter their preferred lighting and temperature settings. From that point, the house changes to these settings in any room the guest enters. Additionally, if a person plays a song in one room, speakers behind the walls continue playing the song to any room they enter.

Unlike most houses that display actual paintings or art, Bill Gates's house features computer screens on the walls that display art and paintings. It is estimated that these wall screens are worth at least $80 000, and the art is stored on devices worth approximately $150 000. As a guest, you can display your favorite pieces on these screens. 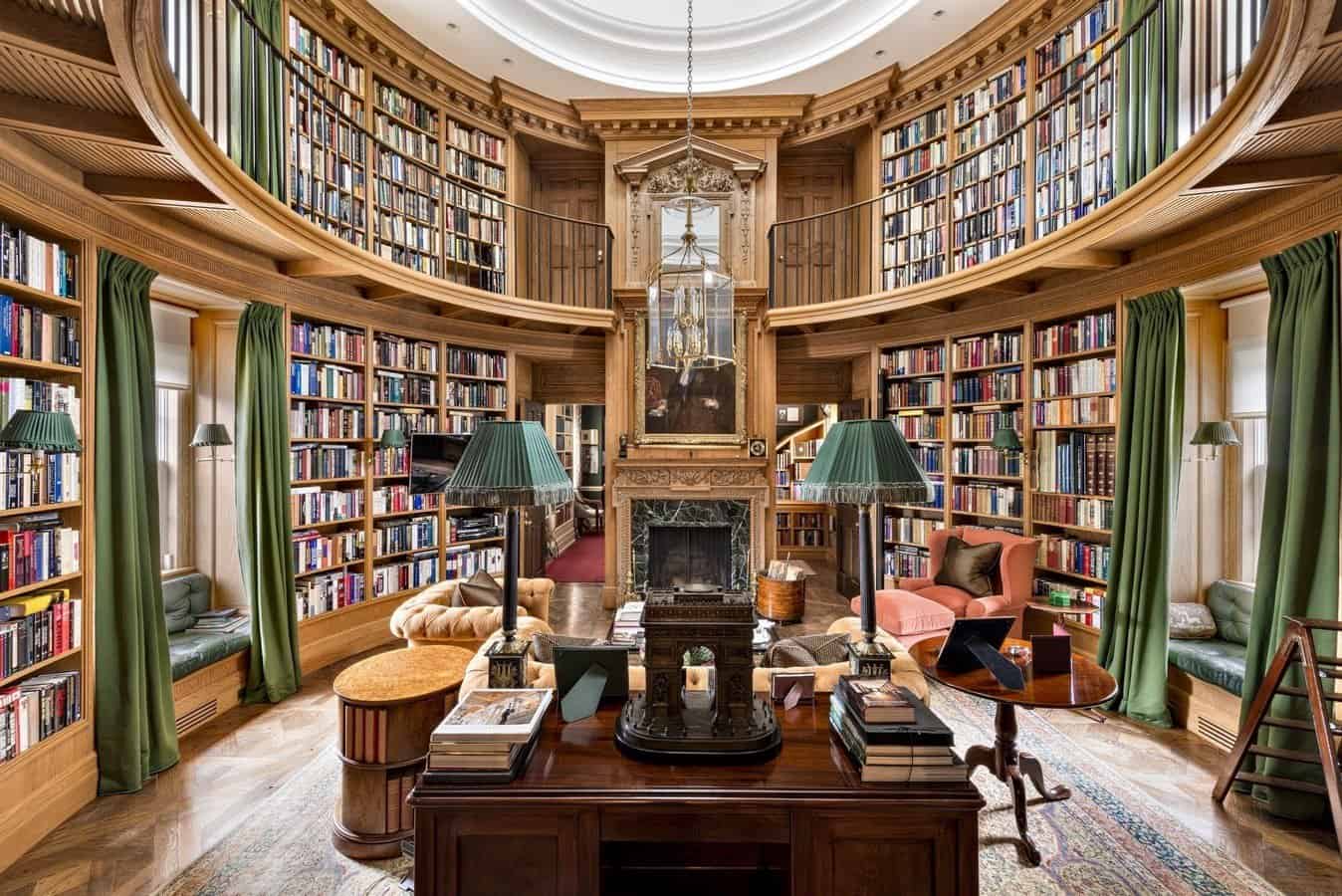 The mansion features an extensive library that houses enough entertainment away from the screens. It features a dome roof and oculus. Apart from two secret bookcases in the library, the room also stores a 16th-century Leonardo-da-Vinci manuscript called Codex Leicester, believed to have cost Bill Gates a whopping $30.8 million.

A testament to Bill Gates' professional journey, the ceiling showcases the famous and influential "The Great Gatsby," quote, "He had come a long way to this blue lawn, and his dream must have seemed so close that he could hardly fail to grasp it." 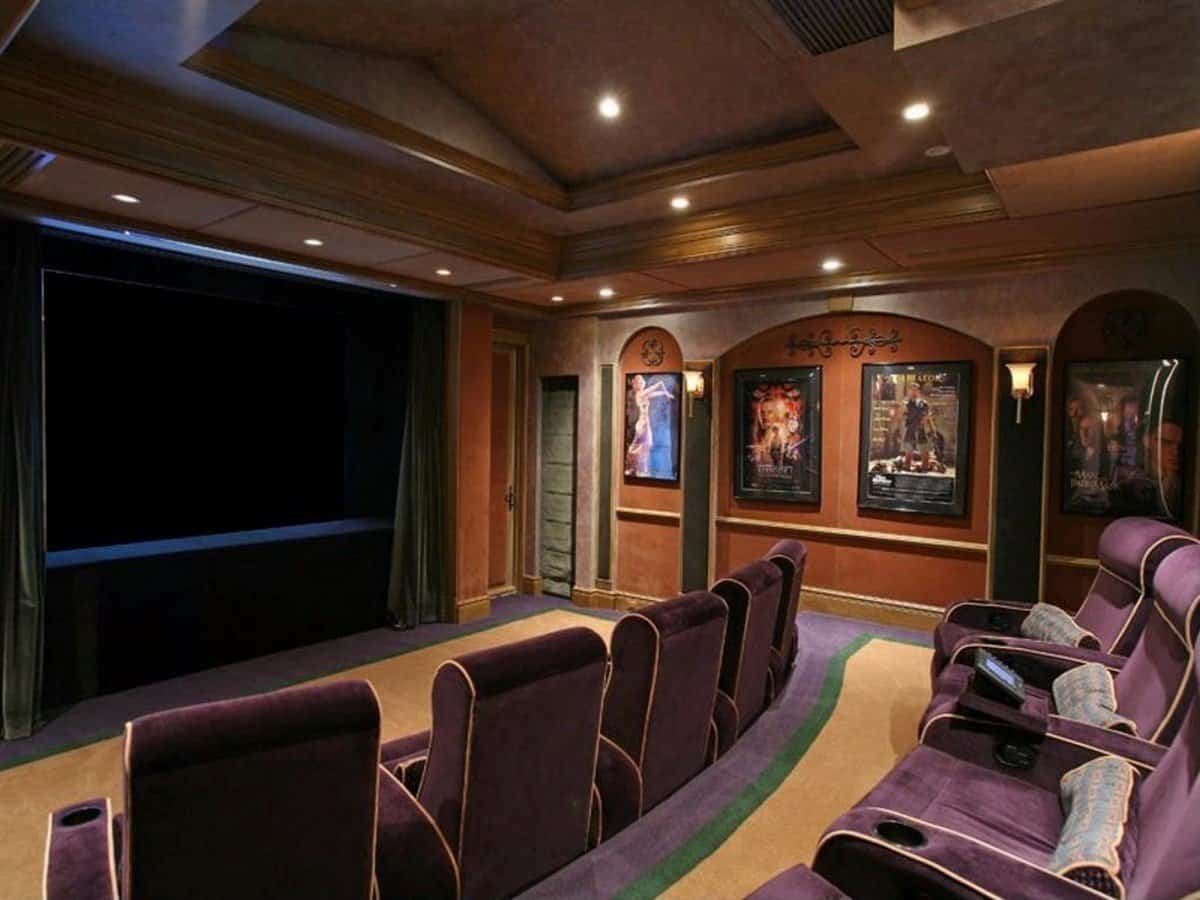 The private home theatre can host 20 people. It features an Art Deco style complete with comfortable armchairs and couches, excellent lighting, and even a popcorn machine for the best experience.

4. It features a large reception hall

5. The exercise facilities include a trampoline

Apart from other exercise facilities such as the swimming pools, the house has a 25,000-square-foot gym that includes a large trampoline room with a 20-feet ceiling. While the construction team may have installed this for Bill and Melinda Gates' then young children, it remains one of the most exciting features.

6. The mansion has many rooms 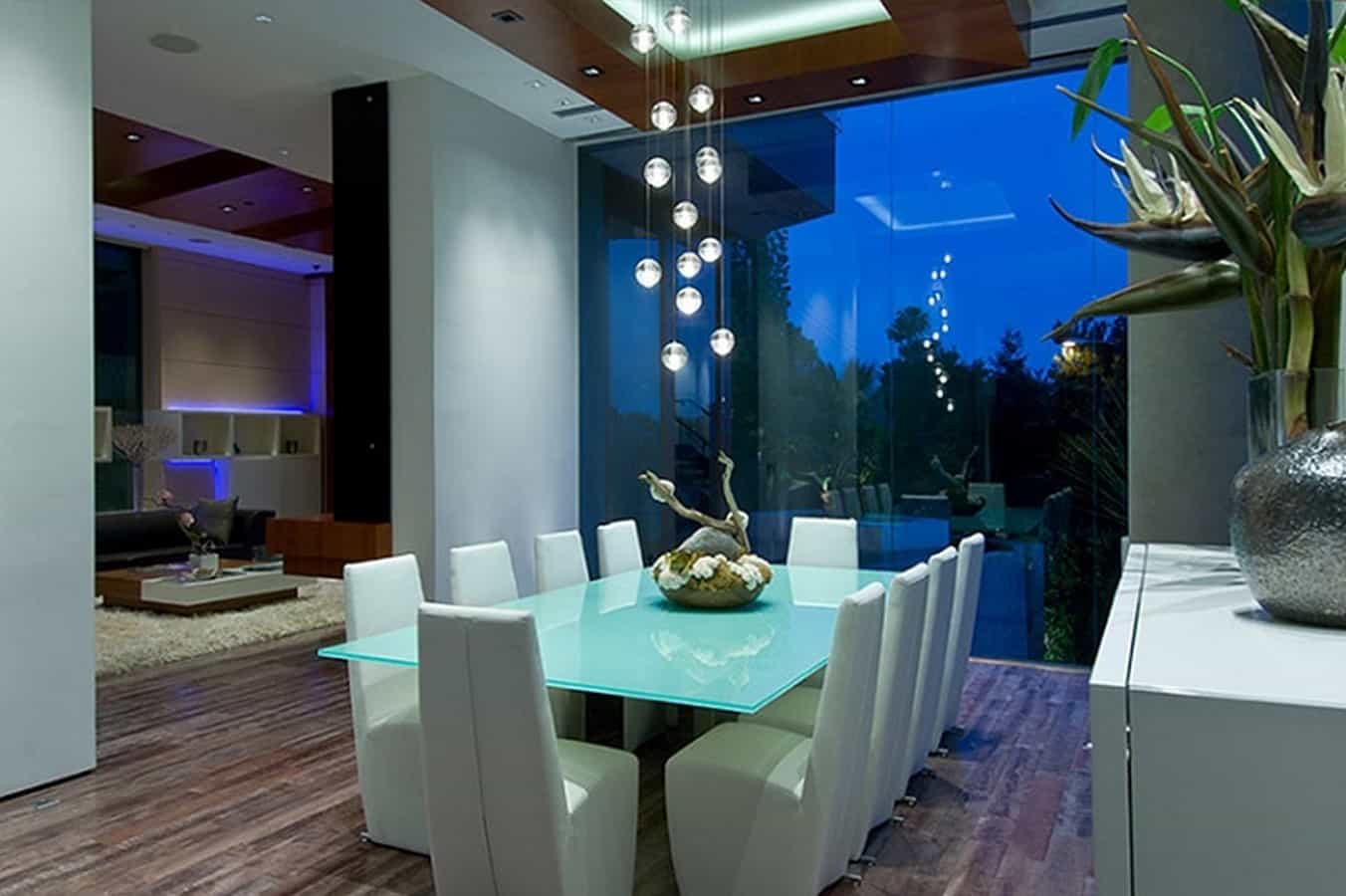 One of the country's biggest homes, Bill gates house features seven bedrooms, 24 bathrooms, and six kitchens. Out of the 24 bathrooms, 10 are full baths that are more than adequate for many guests. The mansion also features a sauna and steam room with separate locker rooms.

Additionally, the house features a 1 000 square foot dining room that can host 24 people.

Other Facts About Bill Gates House

Apart from the house interiors and exteriors, Bill Gates had to make some of the most outstanding decisions before his house was fully constructed. These are;

1. Construction workers tested the concept of the home's high-tech construction on a guest house in the complex

The one-bedroom and one-bath 1,900-square-foot smart guest house located within the complex was the first structure to be completed. The builders used it to test whether the technology currently in the main house would work, and it was successful.

2. The complex needed a large number of workers to complete

With all the features of this house and the fact that it belongs to one of the smartest and rich people globally, it needed the best workers.

Over 300 construction workers were involved in the 7-year process. One hundred of these workers were electricians who oversaw the installation of the house's different intelligent features.

As part of the Microsoft auctions that harvest proceeds for the company's charity projects, a Microsoft employee once bid $35 000 to win a private tour of the house.

Additionally, in the past, Bill Gates has held private tours of his elegant home to donate to many charitable organizations.

4. The lot did not cost bill Gates a fortune

Before the construction began, Bill gates bought the lot for  $2 million in 1988. He also bought the surrounding structures for extra space and privacy, bringing the total cost to $14.4 million.

5. Bill Gates has hosted a party for Governers in this estate

In 2004, gates hosted a National Governors Association party in this Xanadu 2.0 complex. Rather than use the highway, the Governors arrived on boats through Lake Washington, whose access was shortly blocked for the event.