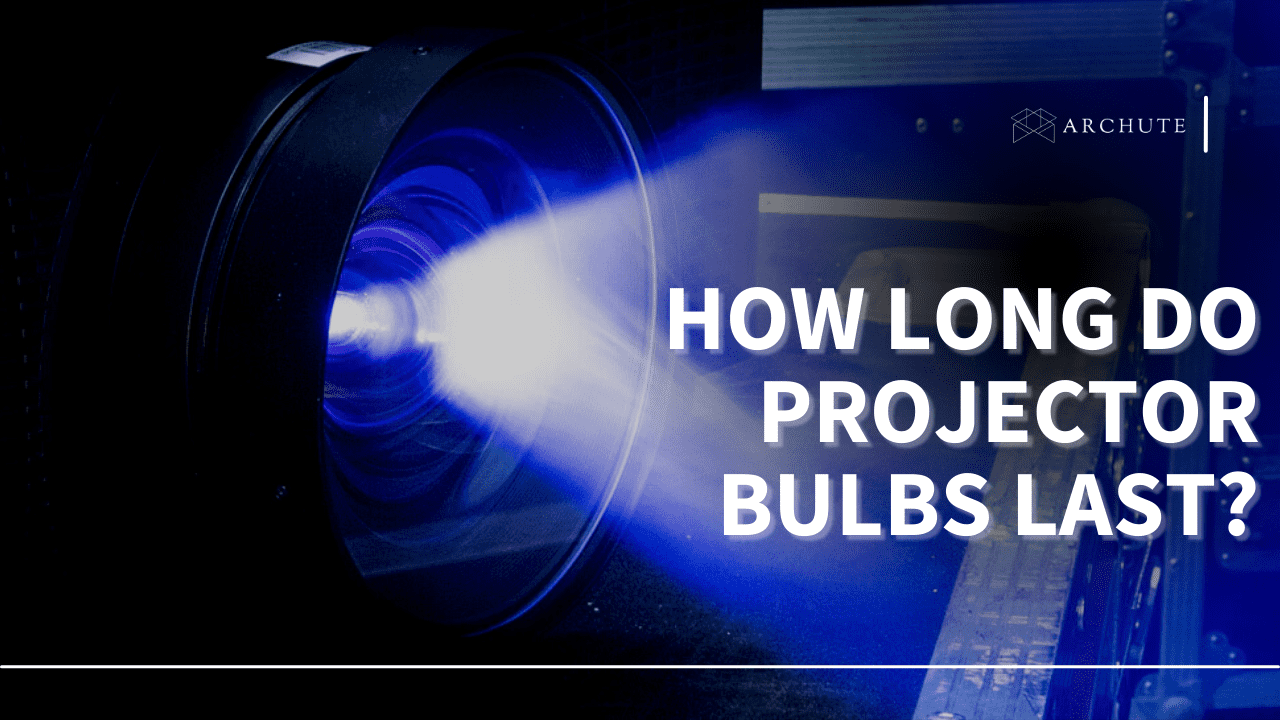 Did you know that a projector’s bulb is the device’s primary component? If the bulb fails, the projector cannot function. So, how long do projector bulbs last?

How Does a Projector Bulb Work?

A projector bulb is the light source that makes it possible to see pictures on the screen through the air. The bulb provides a strong, bright white light that illuminates the screen as clearly as possible.

Most projectors use metal halide or UHP bulbs to suit the function of digital projection. Although there are other types of projector bulbs, these two are the most common.

The projector bulb primarily illuminates the collection of mirrors built within the projector screen, which subsequently causes an air shift in the image on the screen. Modern projector lights operate so flawlessly that you may see certain real-world images on the screen. These bulbs work hard to provide a picture that is sharp, clear, and detailed, just like HDTV or LED.

Also read: Are projectors better than TVs? Our verdict

Modern projector bulbs provide a long lifespan in addition to a superior operating principle. A decent bulb has a projector lamp life of between 2,000 hours and 5,000 lamp hours.

Let’s look at the primary driving forces behind the projector bulb’s lifespan.

There are several types of projector light sources, and each has a variable lifetime. The three main kinds of projector bulbs and their anticipated lifetimes are listed below:

Numerous projector devices use LED (light emitting diode) bulbs since they are widely used. They use the technology of light-emitting diodes and often survive longer than halide projector bulbs.

Depending on your usage rate, LED projector lamps last up to 60,000 hours or more. However, this might substantially decrease. You get 2500 days or about seven years of continuous use with a 60,000-hour duration. A projector bulb with a 60,000 lamp life hours may be used for almost 32 years if you use it five hours each day on average.

Be aware that LED lamp projectors have a half-life that generally applies. A premature lamp failure may also be caused by heavy use and excessive temperature stress.

The average lamp life of a laser lamp or a light source is around 20,000 hours. How many hours is 20,000? Continuous use of the bulb for 20,000 hours will give you a little over two years. A 20,000-hour laser light source can last around 11 years if you operate your projector for five hours each day.

This lamp contains the vapors of high-pressure mercury within the ARC gap that lights up in response to the electric current.

Due to their inexpensive cost and good performance, these bulbs are favored by manufacturers for creating projectors (brightness).

A metal halide lamp has a lamp life of around 2,000 hours, or 3 to 4 months if used continuously, 24 hours a day, seven days a week. The light may last up to two years, which is long enough for normal users who use a projector for 4-5 hours every day.

Some manufacturers assert that their Metal Halide Lamps will last 5,000 lamp hours with proper care under appropriate working conditions.

Half-Life: What Is It?

You can determine when to update or replace the bulb in your projector by understanding half-life. A quantity’s half-life is the amount of time needed for it to decrease to half of its initial value.

When referring to light bulbs, it refers to the amount of time needed for a bulb to become just half as bright as originally. The projector lamp lifespan specified by the manufacturer is its Half-Life Value.

If the manufacturer states that the bulb has a lamp life of 20,000 lamp hours, it indicates that the lamp will begin generating less brilliant visuals after these hours, about half as bright.

When Should a Projector Bulb Be Replaced?

Every type of light bulb has a half-life, after which the light begins to decrease. At first, they remain undetectable. The image still seems flawless on the screen, making it hard to see the dimness. However, the bulb often starts dimming significantly beyond the half-life or due to other negligence.

Modern projectors incorporate lamp technology that allows for the digital countdown. These counters can calculate the bulb’s half-life. This greatly reduces the need to spend money overall. Instead, you should replace the bulb if it is no longer functioning properly. Additionally, keep in mind that changing your bulb will reset the countdown.

The projector bulb burns more easily the brighter it is. Modern LED lamps and metal halide lighting technologies make it more difficult for a light bulb to burn out than the venerable incandescent bulb, which is notorious for becoming extremely hot.

However, as a general rule, the chances of the projector getting heated will increase as the lumens increase. High-lumen or very bright bulbs are used in projector lamps. Standard halide lamps are capable of producing between 75 and 100 lumens of white light per watt.

A typical video projector for home theater applications has a brightness of 2,000 lumens, especially for 4K Ultra-HD or 1080p HD as they need that higher brightness or more lumens to make those extra pixels and projection size stand out with the utmost precision and crystal clarity. Then, an LCD (Liquid Crystal Display), DLP (Digital Light Processing), or LCoS (Liquid Crystal on Silicone) screen is used to display the brightness of the source.

In turn, these panels create the breathtaking video and visuals that modern projectors are renowned for, much like home theater projectors, but for personal use rather than for business.

Since they require sophisticated technology to create or operate bulbs bright enough to provide high-quality or HD pictures, replacements for a burnt-out lamp or bulb can be pricey. By taking better care of a bulb by using it sensibly and sometimes cleaning it, you may reduce the cost of operation.

Also read: How many lumens do you need to project in daylight?

How to Extend the Life of Your Projector Lamp

Here are some actions you may do to increase the lamp’s life:

When dust collects on the light bulb, it can cause increased overheating and end up causing the bulb to burn out before it should.

You should properly and often clear the dust to extend the life of a projector. The light bulb might however spoil if it is handled carelessly. As a result, it would be beneficial if you were very careful while using an air blower or a dry cloth to remove the dust from the lamp.

Also, read the 19 best tips on how to clean projector lenses.

A projector’s worst adversary is overheating. Assuring the unhindered movement of air into and out of the projector is one approach to maintaining the temperature under control.

Make sure your equipment is mounted such that it doesn’t obstruct the air intake or exhaust ports.

Make sure to maintain the air filters around your projector’s vents open at all times if it has them. The filters assist in reducing the quantity of dust that enters.

Projectors from selected manufacturers and models offer a lamp economy mode. If such an option is offered, it will be a huge benefit to your appliance as it will enable it to reduce projector brightness to provide a longer-lasting bulb with a lower chance of overheating. It is comparable to projectors’ “Safe Mode.”

A projector bulb’s lifespan is significantly reduced if it is used continuously, thus this is never a smart idea. Perhaps appliances and other machinery require breaks to use up energy and recuperate. Superb performance is ensured by balanced or moderate usage. This stops bulbs from burning out too soon into their Half-life. The bulb should be used for 3 to 5 hours every day at the very least.

After turning off the power, give your projector’s light at least 10 minutes to cool.

Avoid moving the item while it is cooling off. Never relocate the projector while the light is still on since this increases the danger of overheating. The bulb is more prone to harm when it is hot.

How Much Will a Projector Bulb Cost to Replace?

Both expensive and affordable projector bulbs are available in the market. Amazing bulbs are produced by high-end companies like Epson that cost anywhere from $50 and $350. This pricing range is arbitrary and not fixed.

Therefore, if you have a warranty card while replacing any projector bulb, that’s good news for you. you will be in a position to change the projector bulb without costing you a penny. However, if not or the card expires, a replacement bulb might cost as per your preference. Some bulbs have exceptional performance yet are inexpensive.

Purchasing an original equipment manufacturer (OEM) projector lamp replacement module made specifically for the projector model in issue is the simplest approach to obtaining a suitable bulb.

Some businesses produce replica bulbs as less expensive options. There aren’t many hazards involved if you purchase a projector replacement lamp alone without the housing and renovate the current housing.

A lamp module consists of a projector connector, a burner and reflector-equipped bulb, and a plastic heat-resistant casing. Manufacturers frequently lower the price of bulb modules to entice customers to utilize OEM replacement components.

OEM components frequently have life cycles that are more in line with their predicted ratings. Additionally, they are guaranteed to fit and function with the projector as designed.

Generic replacement bulbs made by third parties for particular projector manufacturers are available. It makes figuring out whether a light will work with your projector simpler.

Although they are less expensive than OEM light modules, their quality is not necessarily as good, which results in variable life expectancies. Before buying this kind of replacement, carefully examine your projector’s warranty since using a non-OEM bulb might void it.

The unit of measurement used to determine how bright a light bulb is is called a lumen. A typical school projector is designed to work with bulbs that put out 1,000–1,200 lumens. Modern projectors with additional strength can handle brightness outputs of 2,500 or higher.

Factors to Consider for an Extended Bulb Life

There are various factors that you should consider if you want your projector lamps to last longer. They include;

a) Type of Ignition

Bright light is produced by projector lamp ignitions by filling the ARC electrical current with either mercury or xenon gas. Compared to their mercury equivalents, xenon ignitions are frequently more costly and have a shorter bulb lifespan, but they generate images with superior quality.

b) Reflectors: Elliptical vs. Parabolic

Lamp voltage describes the kind and volume of current a lamp requires to function. The bulb won’t provide enough light if you pick one with a voltage rating that is too low. Although overpowered bulbs will function, they might get too hot.