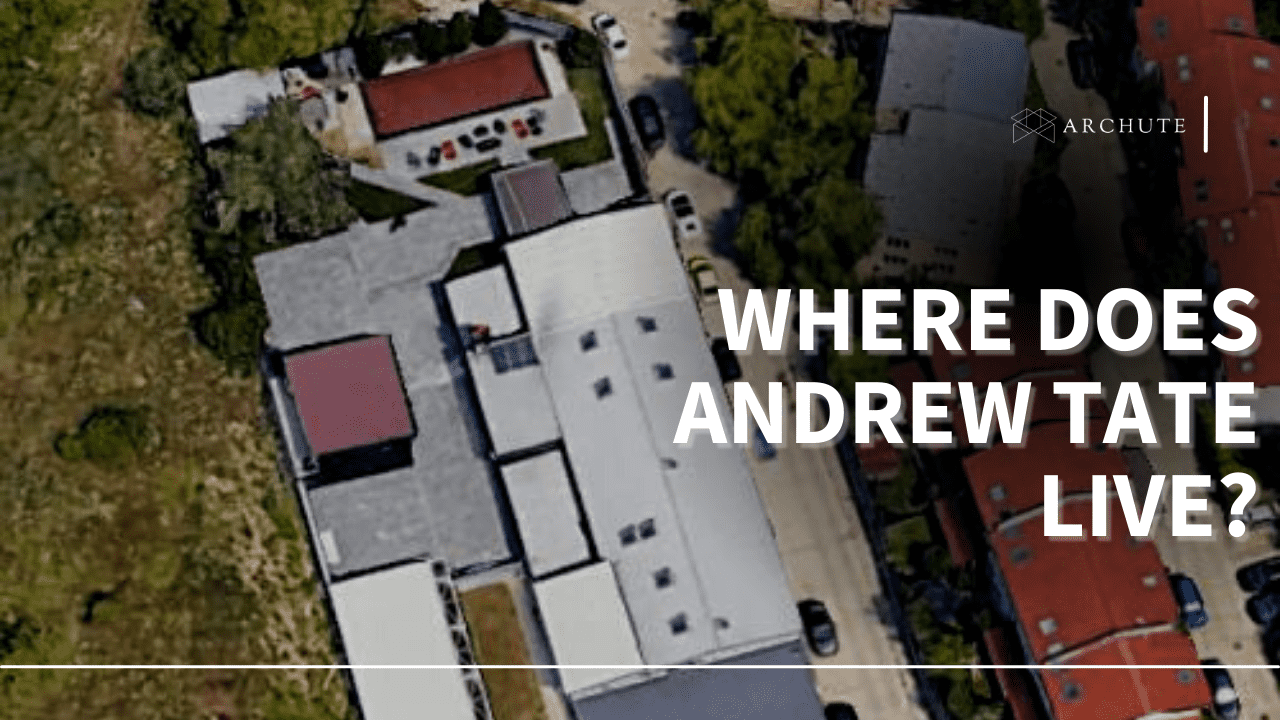 From being a professional kickboxer to owning a luxurious car collection and now a controversial internet personality, Andrew Tate is more private regarding real estate investments. Besides, he recently rose to the limelight after sharing his provocative thoughts online and speaking out against, what he called, the breakdown of values in Western culture while ignoring the backlash and implications of the internet.

Who Is Andrew Tate?

Emory Andrew Tate, better known as Andrew Tate, was born in Chicago, Illinois, on December 1, 1986, and raised in Luton, England. When growing up, he started kickboxing. Andrew Tate won the world championship four times and was quite popular among young people who enjoyed this sport. After leaving kickboxing, he starred in the TV reality show Big Brother.

Andrew Tate was a social media influencer before recently being banned. He had a YouTube channel where he and his younger brother, Tristan Tate, posted lifestyle vlogs and podcasts. His ban on Facebook, Twitter, and Instagram are because of his allegedly misogynistic remarks about sexual assault.

Though not listed by Forbes, Tate’s net worth is about $300 million.

Who Is Tristan Tate?

As mentioned earlier, Tristan Tate is the younger brother of Andrew Tate. He was born on July 15, 1988, in Luton, England, UK. Like his brother, Andrew Tate, he is a well-known former professional kickboxer, social media influencer, TV personality, and businessman. Before retirement, he was a two-time International Sport Karate Association(ISKA) kickboxing champion.

Tristan Tate rose to fame in 2011 after appearing on the British reality series Shipwrecked: The Island. Besides, he was a boxing commentator for Boxnation and Eurosport televised events. After retiring from commentatory, he moved to Romania with his brother to focus on their business.

Though also not listed by Forbes, Tristan Tate’s net worth is about $100 million.

Where Do Andrew and Tristan Tate Live?

Though Andrew Tate owns properties, he prefers other assets. This is not because he believes the property is unprofitable but because it’s extremely vulnerable to state seizure. Andrew termed buying a house a waste of money on one of his podcasts. He believes that real estate ownership is relatively open and hence vulnerable to a wide range of actions ranging from authoritarian-style governments to private lawsuits taking exception to you.

Tate believes that certain digital assets are more secure in owning. He used domain names as an example. An offshore trust can control a domain name, making it difficult to determine true ownership. For Tate, this provides better protection and anonymity than owning a house, which is largely linked to a legal system of a specific nation.

Andrew and his brother Tristan Tate own a beautiful mansion in Bucharest, the capital city of Romania. He paid a low price for the house, but renovations and additions cost almost $30 million. Besides, he purchased his neighbors’ houses for privacy and land.

The house features more than two bedrooms and two baths with over 2,000 sq ft of space. The property appears to be large and is situated in a pleasant neighborhood. Additionally, the house has several amenities. There is a large closet in the house. There is also a vehicle garage with beautiful, luxurious car collections.

i). The Living Room

The open-concept living room features a long stretch of sofas set up directly in the middle of the space, and while they may not appear to be all that supportive, as Tate himself would find out, they have genuine power. The house was empty when the brothers moved in a few years ago; one item they ensured to set up immediately was a chessboard that reminded them of their father, Emory Tate, the late grand chess master.

The living room has a long stretch of windows that allows enough lighting to penetrate the room. Furthermore, in the middle, there is a fireplace that keeps everyone warm throughout the chilly Romanian winters. Plus, the dining room table completes this basic space.

Though cooking isn’t the Tate brothers’ thing, they have a fully equipped kitchen, including an espresso machine and a fridge always stocked with primarily three items: meat, beer, and alcohol.

The Tate brother’s outdoor patio is directly accessible through sliding doors in the back of the kitchen. Here we have another banquet table and a built-in barbecue.

The property has an indoor swimming pool so the Tate brothers can maximize its use, and when they are done swimming, they can transition into lifting weights with their home gym set up at the far end of the pool.

The second floor is accessible via a flight of stairs in the living room. Upon getting on the second floor, you are greeted by several guest rooms, all of which have walkthrough wardrobes and an ensuite bathroom. Also located upstairs is the home theater, loaded with a projector, a large screen, and many blackout curtains.

Andrew’s primary suite, or the G’s room as he likes calling it, has a large chandelier hanging from the ceiling. Besides, its balcony from which Andrew Tate can oversee his compound top it all off, there’s a snakeskin wall around the corner on the other side of that wall which is a walk-in closet. Andrew Tate also has an ensuite with a shower and a bathtub.

The top floor of the mansion belongs to Andrew’s younger brother Tristan. The space has an open concept with a bed, television, sitting area, and enough room left over for a desk. Besides, the best feature on this third floor is the incredible balcony from which the Tate brothers can enjoy views of the entire city of Bucharest.

Unlike their main home, Andrew and Tristan Tate have spared no expense on a secondary mansion dubbed “The Cobra Tate Estate,” which is located at the end of a cul-de-sac and is believed to have cost around 28 million dollars. Again, black is the dominating theme here; as you approach the front doors, you will find that they have been wrapped in red lights, giving the impression of visiting a nightclub. Also, upon entering the house, you are welcomed by a mirror hanging on the wall and multiple epic lights.

There’s an open-concept main space with a bunch of leather seating arrangements and a large widescreen tv hanging on the wall. On the other side of the room is a dining area and a kitchen that, much like their original home, and to top it all is an entire wall dedicated to computers, which, considering all the tech spaces.

The mansion has a bedroom suite accessible through a hidden door beneath Andrew Tate’s four former championship belts. Besides, the mansion has an all-black marble bathroom with dual sinks and a dressing room space that Andrew has populated with as many firearms as he has clothing and accessories. Also, around the corner is Andrew Tate’s private gym.

Frequently Asked Questions on Where Does Andrew Tate Live?

1. Why Are the Tate Brothers Living in Romania?

Tate is believed to have left the UK for Romania when UK police investigated abuse allegations. In a video explaining his reasons for relocating, he stated that it would be easier to evade rape accusations.

2. Do the Tate Brothers Live in the Same House?

Yes. Tate brothers are both exceedingly wealthy and have stated that they are multi-millionaires. In addition, Andrew Tate has stated on multiple occasions that he and his brother are incredibly close and do everything together. The brothers live, train, work together and even share a bank account.

3. Why Are the Tate Brothers so Popular?

Andrew Tate participated in Big Brother in the United Kingdom in 2016. He was booted out, however, after his abusive tweets became public and a video of him hitting a lady with a belt. The lady and Tate have stated that there was no abuse and that the tapes depict consensual sex.

4. How Much Does Andrew Tate Make?

Andrew Tate is a $300 million net-worth American-British Internet personality and former kickboxer. Moreover, he is a well-known and successful businessman. According to his claims, Andrew has more than 100,000 active subscribers. It’s therefore estimated that he earns about$5 million each month just from Hustler’s University alone.

5. What Businesses Does Andrew Tate Own?

He owns several restaurants and casinos, which have given him huge wealth. Besides, he has been in multiple television series. Tate has also received attention for his work as a sports commentator. The Tate brothers’ companies have brought them huge success and wealth.

6. Is Romania a Decent Place to Live?

Being a member of the European Union, Romania is an easy and accessible area for Europeans to move to. Also, Romania is one of the most economical EU nations, with low living costs, quick internet, and friendly residents.