Where Does Eminem Live Currently? Here’s What We Know

Marshall Bruce Mathers III, famously known as the rapper Eminem, was born on 17 October 1972. Eminem is a best-selling artist, American rapper, and icon in the music industry. He's also a remarkable songwriter, record producer, and actor. As of 2022, his net worth is $230 million- so yes, he's a big deal. So, of course, we'd all want to know where does Eminem live?

What kind of decor does he prefer? Does he prefer a minimalistic approach, or does he like to live it large? Well, let's find out.

More About the Slim Shady

Marshall Mathers, aka the Slim Shady, is undoubtedly one of the best rappers alive, especially after his career in hip-hop and rap soared in 1999. His big break was in 1997 when he attended the Rap Olympics MC Battle in Los Angeles, where he caught the attention of Dr. Dre, who's also a music producer.

They decided to work together to produce his top-chart debut album, The Slim Shady LP, which was released in 1999. Eminem made his first appearance in film in 2002, with a musical drama, "8 Mile", where he played a fictionalized version of himself. His track "Lose Yourself" and soundtrack in the movie won an Academy Award for 'Best Original Song.' He is the first hip-hop artist ever to win this award.

Eminem's next album, "The Marshall Mathers LP," sold more than 19 million copies globally and won a Grammy Award for 'Best Rap Album.' He has since branched out into other projects, including launching his own record label, 'The Shady Records.'

As they say, the rest was history. This far, with more than 20 years of experience in the entertainment space, he has sold more than 172 million albums, has 15 Grammy Awards, and has an Oscar. 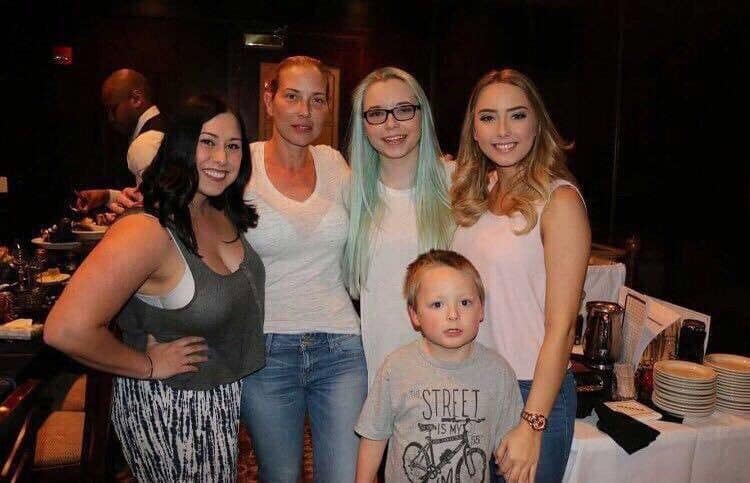 Marshall Bruce Mathers III, aka Eminem, was raised by his single mother, Deborah Mathers. He had a tough upbringing and moved from town to town, in places like Missouri and Michigan, because of his mother's inability to keep a job.

Eminem has an ex-wife, Kim Scott, who he has married and divorced twice. However, he has full custody of his three children. His daughters, Hailie, Alaina, and Whitney, have all lived with him in his different mansions. He's notoriously private, which has helped him shield them from the at-times-hectic Hollywood limelight.

Eminem has had two homes. One in Clinton Township, which currently serves as his primary residence, while the other in Rochester Hills, Detroit, was just listed and sold. However, he lived there for 14 years.

Despite the US entertainment industry being largely centered in Los Angeles, Eminem chose his Midwestern roots over the proximity to the US music industry. He continued to live near Detroit, Michigan.

This 15,129-square-foot mansion sits on a 17,000-square-foot estate located in the wealthy Rochester Hills suburb. This is prime location that's minutes away from downtown Rochester and near the Stoney Creek Metropark.

Eminem bought this mansion in Detroit in 2003 for almost $4.8 million. The mansion was known as the 'Kmart Mansion' since it was owned by former Kmart CEO Charles Conaway, who ran into legal issues leading to Kmart's bankruptcy. Eminem later listed this house in August 2017 for less than $2 million, which was sold that following month. He lost quite an amount on this one, but in Eminem's defense, he bought it when real estate values were at their peak. However, property values in this area never fully recovered after the 2008 US market crash.

The Exterior of the Rochester Hills Mansion

This 17,000-square-foot estate is located in a wealthy suburb. It expansively houses six bedrooms and 9.5 bathrooms, a tennis court/ basketball court, waterfall swimming pool with spa, entertainment cabana, hot tub, and a 2,000-square-foot guest house with a wild game room. 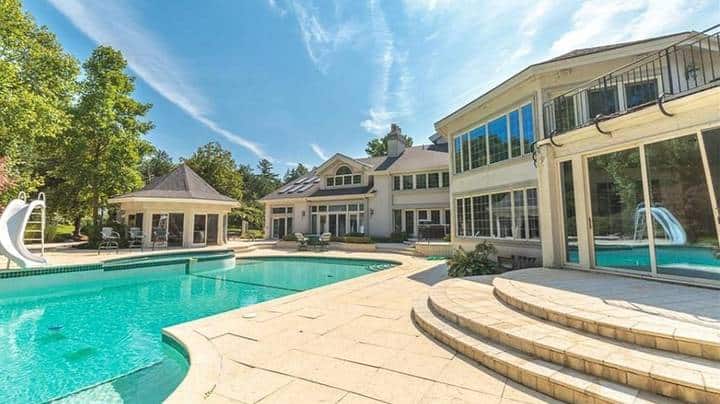 The pool area is surrounded by a large patio that would be ideal for large gatherings.

Eminem's former mansion is quite something; it has a private pond with a launch dock and a 3,930-square-foot five-car garage. In addition, Eminem had custom builds worth millions of dollars throughout the house, including prime visual, audio, and lighting systems. 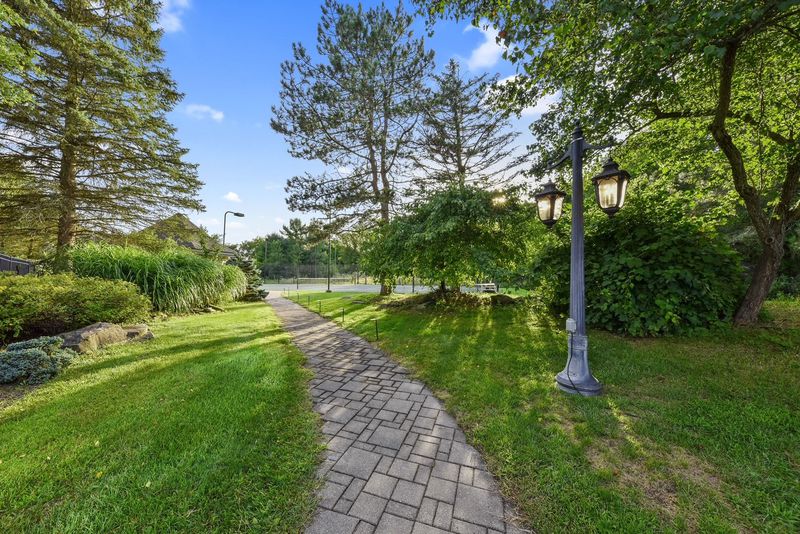 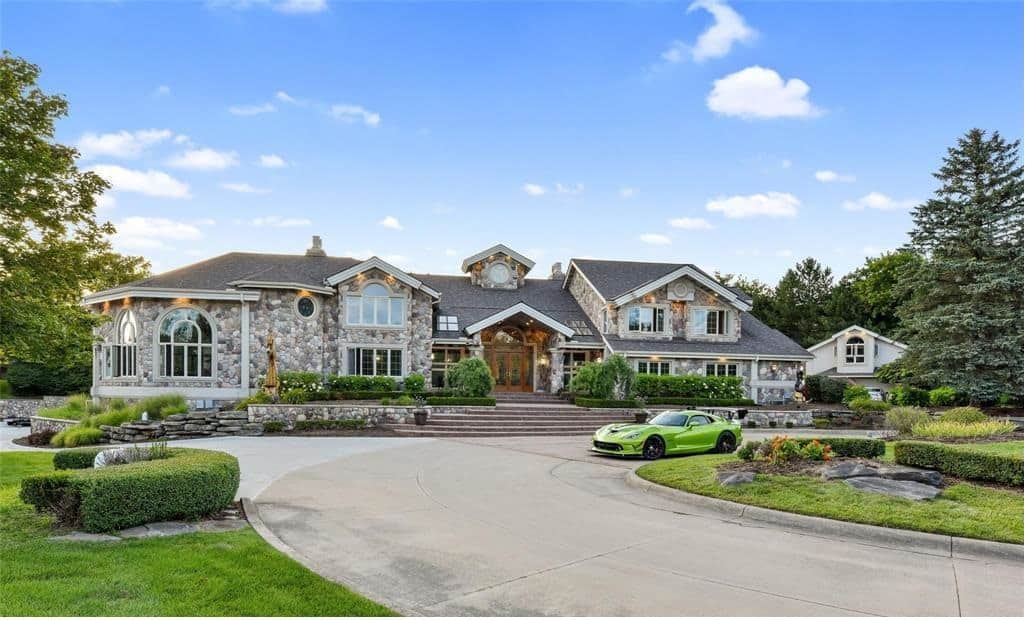 The well-kept tennis court also doubles up as a full-length basketball court with multiple light towers. 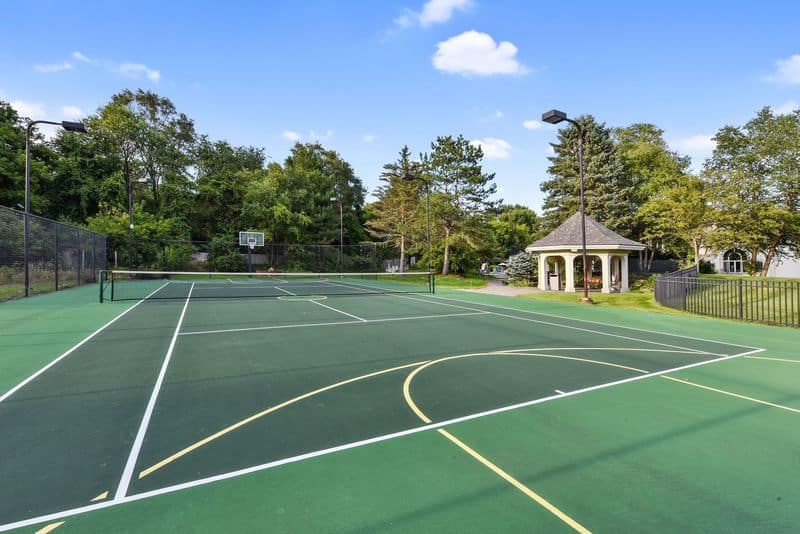 This comes in handy, so players won't be limited to the daytime only for games.

The Rochester mansion has a somewhat quirky blend of the country flair and a stark suburban interior theme.

This theme is further complemented by breathtaking design elements and top-quality custom materials. For instance, it has hardwood floors that extend throughout the main house to the guesthouse.

Large windows surround the living room for a well-lit space to usher you into a warm wooden theme and minimalist space. 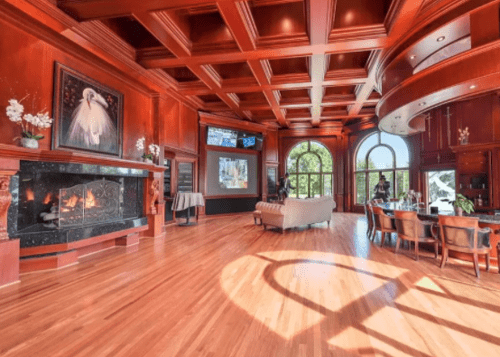 Eminem's exquisite minimalist taste is shown by the centered black marble fireplace that acts as the focal point in the room. 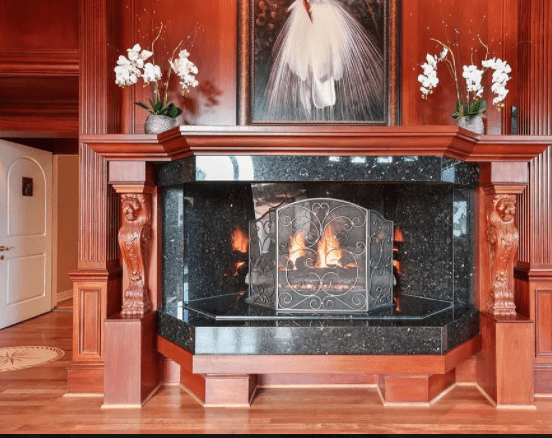 The living room area directly overlooks the walkway with manicured lawns and hedges. 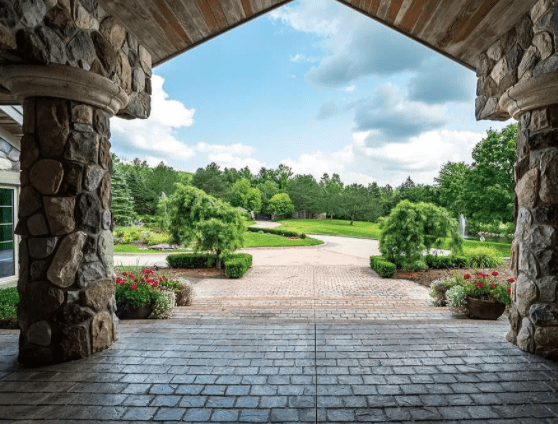 Eminem's house also has a classy custom wooden finish in the dining area. 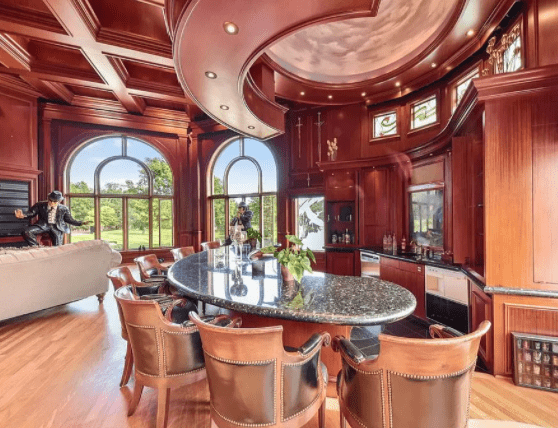 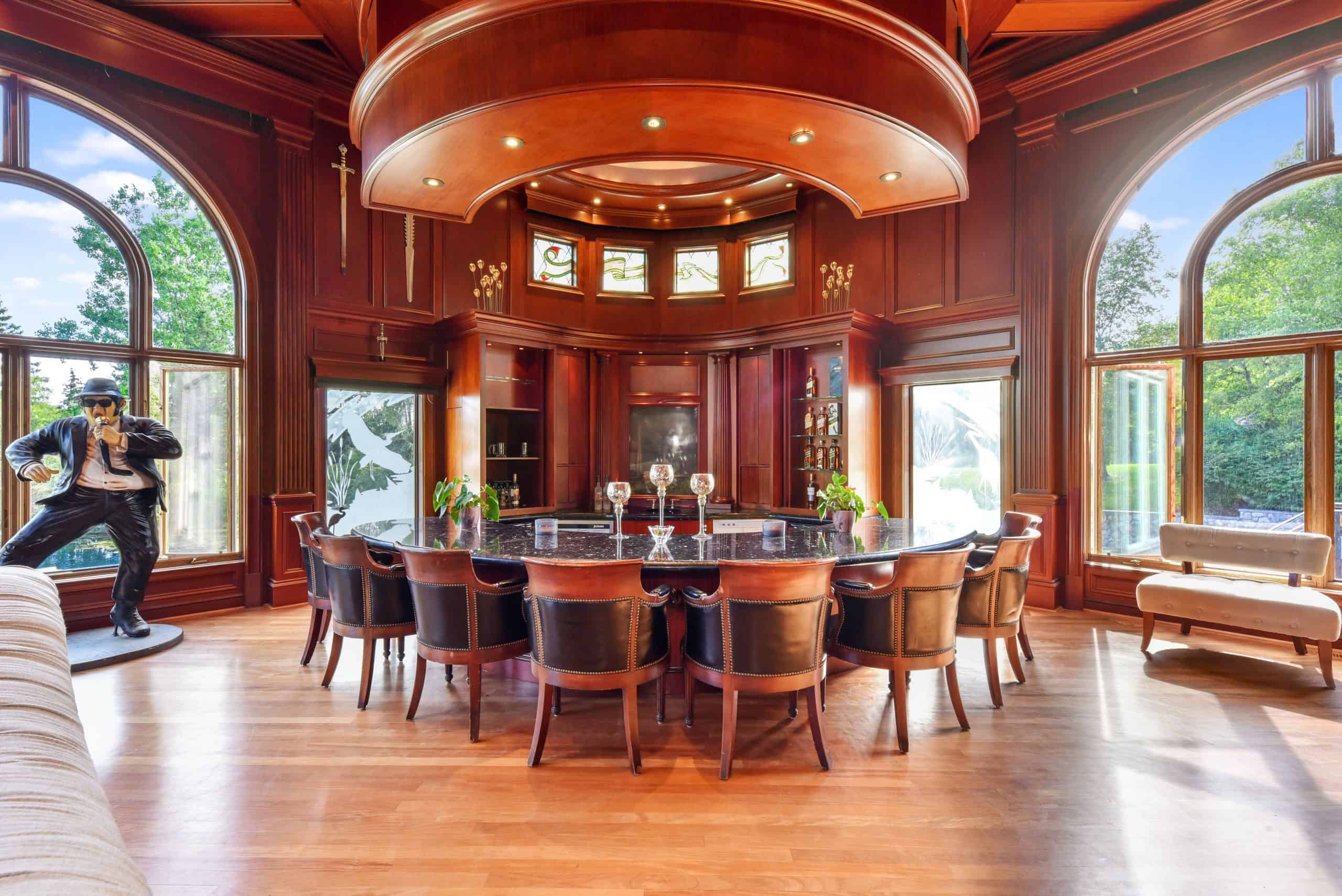 Eminem also had custom features like impeccable woodwork used throughout the billiards room, the liqueur bar, and the dining room. 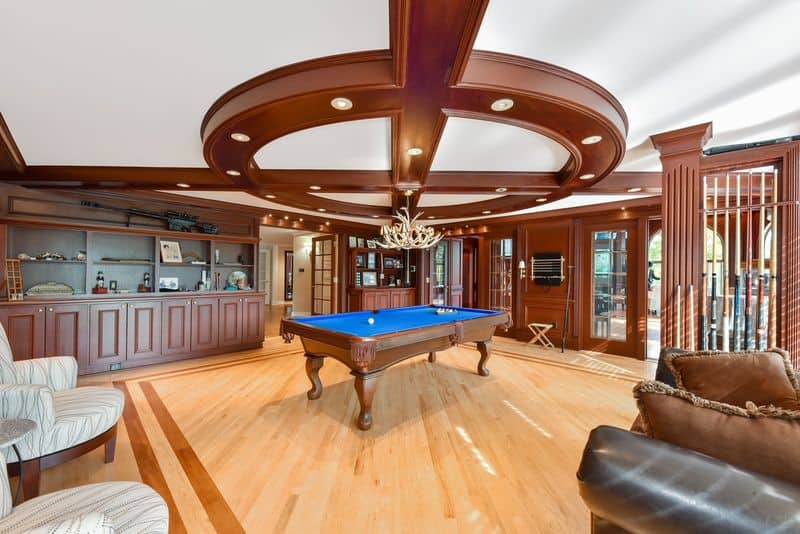 Eminem also included amenities such as a hot tub and steam room. 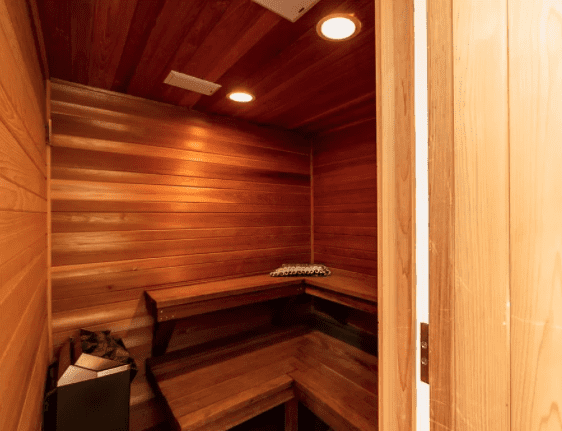 The main house has six bedrooms and nine and a half bathrooms which all take a modern contemporary but minimalist vibe. 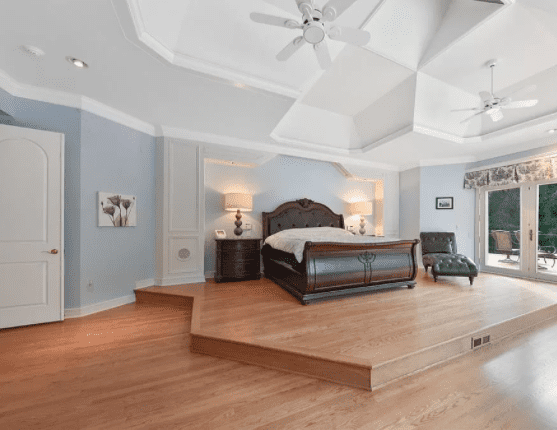 Each bedroom has an open view with large windows that invite the scenic view outdoors inside. 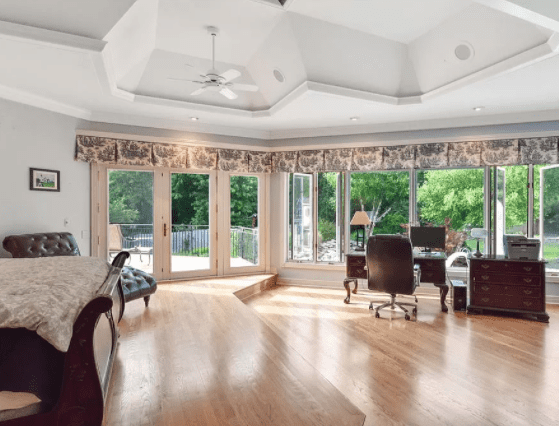 The bathrooms have a white marble theme that gives off a luxury feel. 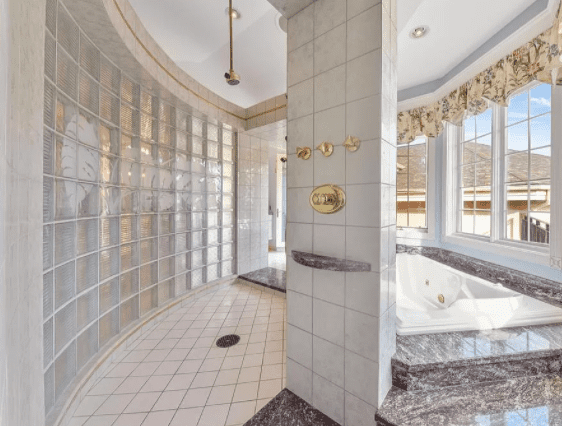 The kitchen is any cook's dream, with granite counters, traditional country oak finish on its floors, and modern cabinetry. 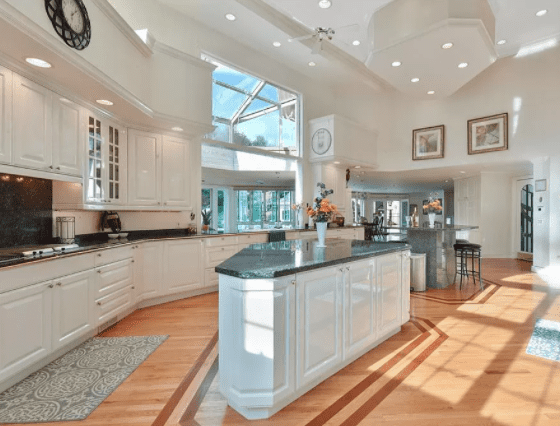 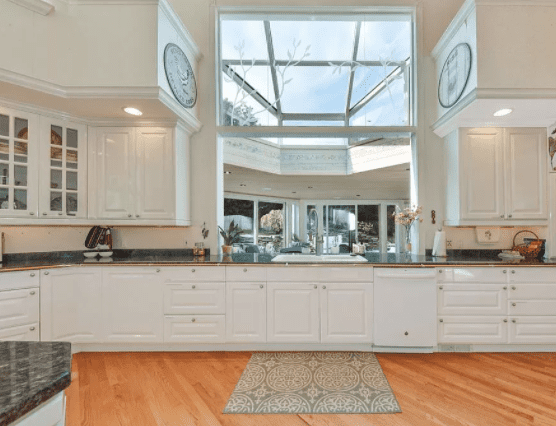 The guesthouse is a separate two-story residential space that is fully self-contained and quite lucrative. The mansion also has an entertainment cabin with an elegant kitchen.

A house this size would go for so much more on the West Coast, so it was a total catch for the amount Eminem bought it at. 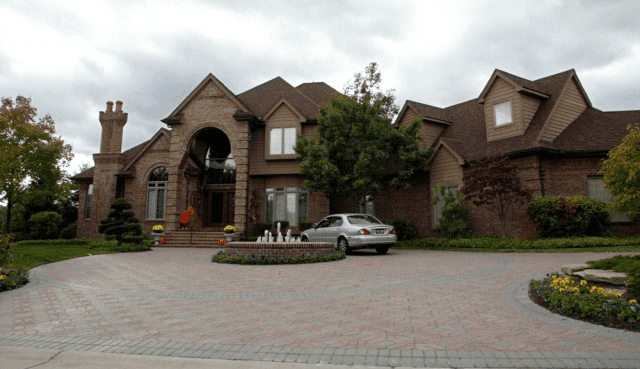 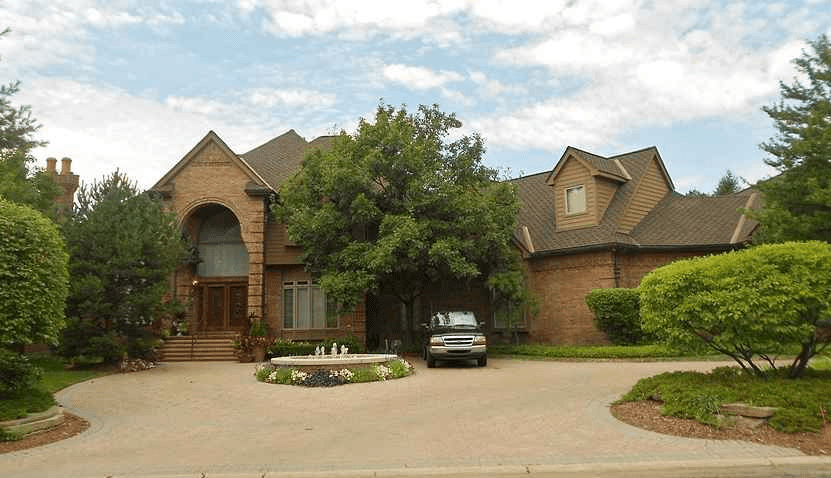 This mansion was built in 1996. Eminem currently lives in this Clinton Township mansion with his daughters, Hailie, Alaina, and Whitney. Eminem also lives there with his half-brother, Nathan. Before selling it, the Rochester Hills house served as his occasional getaway.

There is not much known about the interior of this home, but we know that the 7,464 square feet of space have four bedrooms and six bathrooms.

It has a heavily secured compound with a guard house right outside the main entrance. This is perfect if you're a celebrity trying to maintain your privacy.