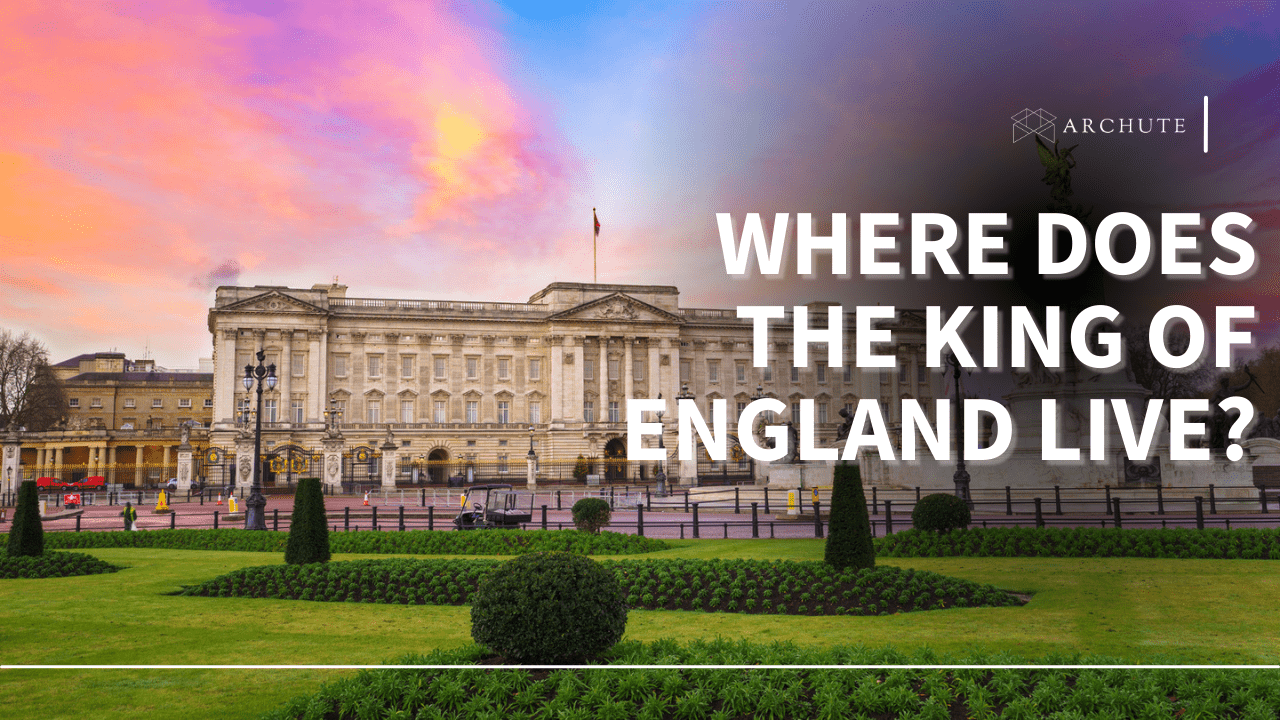 King Charles III is now the recognized new monarch of the United Kingdom following the passing of Queen Elizabeth II on September 2022. King Charles has an amazing portfolio of properties spread over England, Scotland, and Wales.

This is not a surprise, as real estate is royalty’s gift. Before adding Queen Elizabeth’s residences, including her favorite, Balmoral, where she passed away, the former Prince of Wales and Duchess of Cornwall, Camilla, now Queen Consort, had six estates of their own.

So, where does the King of England live? We have taken a deep dive and listed all the properties owned by King Charles. Read on.

Who Is the King of England?

The King of England was born on November 14, 1948, to Princess Elizabeth and Prince Philip. Charles was born in Buckingham Palace during the reign of his maternal grandfather, King George VI. His inauguration took place in 1969 after he was named Prince of Wales in 1958.

King Charles was appointed the new monarch of the United Kingdom after the passing of Queen Elizabeth II. King Charles III is the UK head of state, and although his powers are ceremonial and symbolic, he is politically neutral.

His magnificent real estate portfolio expanded, as a result, encompassing more land in England, Scotland, and Wales, which were both purchased and inherited. In addition, there were six estates owned by Charles and Camilla (now the Queen Consort) before the passing of Queen Elizabeth.

Where Does the King of England Live?

Buckingham Palace is one of the residences King Charles III inherited after Queen Elizabeth II’s death. It is the most popular royal residence in the United Kingdom, where he will be residing, leaving behind his long-term main residence.

Buckingham palace has a throne room with a pair of chairs called the Chairs of Estate. They are made from carved and gilded beechwood and covered in crimson silk damask.

The King Charles staircase is a grand affair, unlike the Queen’s, which was plain and domestic.

The white drawing room is among the most recognizable rooms as its where the late Queen Elizabeth II delivered her Christmas address. In addition, it serves as the reception room where the King and members of the royal family gather before any official occasions.

There is also a green drawing room which gets its name from the green and gold silk wall coverings installed as a suggestion by Queen Adelaide.

Originally, the flooring, walls, upholstery, curtains, and some accessories were all the same shade of green. More recently, a large area rug was swapped out with one that was ruby red.

Buckingham palace is known for its imposing scagliola columns in the bright royal blue color. Another great feature of the music room is the parquet floor of satinwood, rosewood, tulipwood, mahogany, and holly.

There have been multiple renovations over the years to match the different royal family member’s tastes. However, the royal residence still has many decor pieces in honor of Queen Elizabeth II and Queen Mother’s painting collections.

The Clarence House was built in the 1820s and includes five bedrooms, a Morning Room with personal photographs, antiques, and artworks, a drawing room with a central fireplace, and extra principal rooms, which have been used for receptions and official entertainment over the years.

In the Morning Room is a portrait of Queen Elizabeth, the Queen Mother, and above the door, you will find Henri Fantin-Latour’s Azaleas And Pansies, a still-life masterpiece from 1881. There are also Giltwood chairs by Thomas Chippendale and a late 17th-century longcase equation Clock by Thomas Tompion.

Clarence House is often accessible to the general public in August of each year if you want to stop by.

The Garden room, which has a view of a portion of the Clarence House garden, and the Queen Mother’s art collection are both accessible to visitors. There is also Leandro Bassano’s Noah’s Ark and a French writing desk above it.

Highgrove House is considered one of King Charles III’s favorite residences since it is where he spent his first day in private reflection after the Queen’s passing.

Prince Charles and Camilla Parker Bowles’ family home is Highgrove House, which is close to Tetbury in the English county of Gloucestershire.

According to his official website, King Charles III notes that he chose this location in Gloucestershire thanks to its easy access to most parts of Britain, including Wales and London.

Balmoral castle was initially bought as a holiday home by Queen Victoria, and it sits on 50,000 acres and has 150 buildings. It is privately owned and was developed by Prince Albert and Queen Victoria, and the King usually spends summer months on this estate.

The Crown Estate has a curved wooden door that gives a striking entrance to the castle. It is estimated at £155 million with 775 rooms, 52 royal bedrooms, 188 staff bedrooms, 19 staterooms, 78 bathrooms, and 92 offices.

It is located in Royal Deeside, Aberdeenshire, in Northeast Scotland, which means the area has mountains and beautiful scenery. The estate has picturesque climbing plants on exterior walls, making the property perfect for a postcard.

The King has significant connections to the area because he and the Queen Consort went on their honeymoon at the nearby Birkhall, which he already owned and had inherited from his grandmother.

King Charles has lived in Birkhall, Scotland, since 2002. But, then, it was Queen Elizabeth, The Queen Mother’s former residence, which she referred to as a “Little Big House” and is located on Queen Elizabeth II’s Balmoral Estate in Royal Deeside.

The Birkhall home has a beautiful entrance to the house and a large blue porch.

Birkhall is located on the Balmoral estate. The former Prince Charles and Queen Consort Camilla spend their summer breaks here and enjoy fishing and walking in the beautiful countryside.

However, the Birkhall wasn’t in the royal family’s possession until 1852, when Prince Albert got it as a wedding gift for his son, the future King Edward VII.

Since Birkhall is a private residence, there aren’t many images and information about this home.

Windsor Castle, also known as the Big House, has been a part of Britain’s royal heritage for over one thousand years, and its the oldest inhabited castle in the world. With the Queen’s death, King Charles inherited Windsor Castle.

The Windsor Castle walls look like they have been removed from the pages of a fairytale with intricate gold leaf and sculpted plaster. The lighting ideas are also impressive, with several chandeliers in ballrooms and hallways.

Bedrooms in the castle are daring, with the King’s bed chamber being a bright red room with a unique red damask paper that speaks of Windsor Castle’s historical affluence.

The huge Guiltwood canopy is framed with rich velvet hangings, and this room has gained notoriety for its innovative drapery and curtain designs.

Although most formal banquets are held in Buckingham palace, this Windsor Castle dining area has also seen important events and figures. The room displays aspirational paintings and incredible artwork accompanied by wood-carved walls.

As one of the largest rooms in Windsor estate, the Waterloo Chamber is meant for the British Victory at the Battle of Waterloo; no wonder the name. The room’s great features come with an impressive carpet, elaborate wall paneling, and an enclosed ceiling designed to mimic the inside timers of the great ship.

Unlike other residences owned by the royal family, this Norfolk country house is owned privately by the Monarch after King Edward VII originally bought it.

King Charles has been running the 20,000-acre estate since 2017 and has transformed it into a fully organic enterprise.

Sandringham house comes with a Grade II listing. It’s also where the royal family lives from Christmas until mid-February in most years.

Some parts of the house and grounds are open to the public with the lavish gardens, museum, and visitor center.

The Sandringham Estate also has Anmer Hall, a wedding gift to Prince William and Kate Middleton. They share their ten-bedroom countryside home with their children, Prince George, and Princess Charlotte.

Where Had the King of England Lived Before?

Kensington Palace is hidden in Hyde Park and the heart of London. It is minutes from Buckingham Palace and St James’s Palace, making it handy for easy family visits.

Once known as the royal commune, several members of the royal family have lived here, and it was also the childhood home of Queen Victoria.

The palace has an interesting and rich history from the 17th century. It came into the spotlight after Princess Diana and King Charles moved in after their wedding and lived with Prince William and Prince Harry.

Prince Charles and Queen Consort Camilla Parker Bowles reside in Wales at Llwynywermod. Following its 2007 purchase by the Duchy of Cornwall, the farmhouse underwent renovations by local Welsh contractors and artisans.

According to the Prince Charles website, Welsh materials were used for the project, and Welsh fabrics were used to decorate the inside. The couple stays at the accommodation on their yearly summer trip to Wales.

Llwynywermod interior features a beautiful reception room with grand high ceilings and exposed wooden beams. It has three bedrooms, and its bathrooms have cream walls and tiles. It also has a farmhouse featuring three cottages, a separate main house, and a Grade II-listed barn.

When King Charles and Camilla entertain guests, they set up their extensive wooden dining table and coordinate chairs with black leather backs.

As with almost all royal residences, its outside space is also picture-perfect. It is surrounded by 192 acres of rural land, including six English field maple trees originally planted at Llwynywermod and served as the avenue of trees for William and Kate’s 2011 wedding.

The Castle of Mey property, originally known as Barrogill Castle, is situated in Caithness on Scotland’s northern shore and was bought by the Queen Mother in 1966. King Charles inherited this residence from his grandmother, the Queen Mother, after she died in 2002.

Although Prince Charles doesn’t live here, he visits at least once a year. He and the Queen Consort stay there around late July and early August.