You're 'sliving' - heavy on the 's'- when you're living your best life and still 'slaying' it. At least that's how Paris Hilton likes to view it. Paris Hilton, the 41-year-old American entrepreneur, media personality, model, and recently turned DJ, has prominently made a name for herself as the embodiment of luxury. So, does the same apply to her private life and home? And where does Paris Hilton live?

Who is Paris Hilton?

It's all in the name. Paris Whitney Hilton is on of the great-granddaughters of the founder of Hilton Hotels, Conrad Hilton. She is also the daughter of Kathy Hilton and Richard Hilton of the Hilton family. She was born in New York and grew up in Bel Air and Beverly Hills, California.

Several decades on, Paris continually proves that she's more than that by excelling and striving to make a name for herself; as an American media personality, model, pop culture socialite, entrepreneur, and now DJ.

The Hilton fortune was worth $4.5 billion; however, Barron Hilton, Paris' grandfather, had 97% of his wealth donated to the Conrad N. Hilton Foundation charity. He only left 3% of his money to his eight grandchildren, 15 grandchildren, and four great-grandchildren. This amounted to roughly $135 million, and when evenly split, Paris was to get $5.6 million.

Paris has had her fair share of scandals and breakups, but she seems to have found her happy ending with her current husband, Carter Reum. Carter is famously known for founding the M13 Ventures. He is a venture capitalist, entrepreneur, and American author. 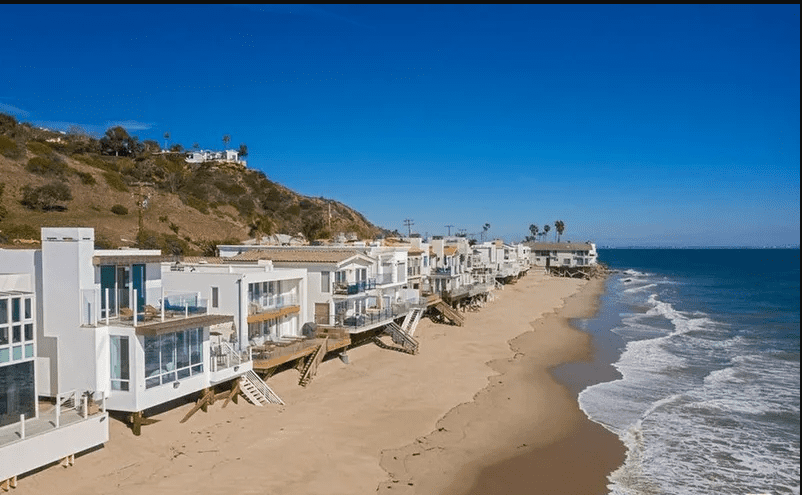 Like many celebrities, Paris and Carter have amassed real estate property like the beautiful mansion in Los Angeles. However, the couple bought this stunning beachfront Malibu home on La Costa Beach—the new celebrity hotspot —together in 2021 for $8.4 million.

They bought it from the late former chairman of Universal Pictures, Tom Pollock. The couple currently lives together in this lovely beachfront mansion in Malibu, La Costa Beach. Let's dive in- pun intended.

The Exterior of Paris Hilton’s Home Paris and her husband Carter Reum bought this lovely 3,000-square-foot new home on Malibu's beachfront in 2021. They bought it for $8.4 million, but it's currently estimated to be worth $11.1 million. It was originally built in 1955.

It has three bedrooms, three bathrooms, a lovely courtyard, a two-car garage, a spacious living space, and much more.

The exterior comprises large terraces, a walled garden, an oceanfront deck for barbecues and outdoor dining, more than an 800 Sqm beachfront lot, outdoor shower space, and an outdoor Jacuzzi. They also have direct access to La Costa's blissful beach.

This modern contemporary home is situated right on the bustling Pacific Coast Highway. However, it's well fortified using a navy blue wall from the world behind. Additionally, there are plenty of cameras connected to a top-notch security system. Inside, a lovely, maintenance-free landscaped courtyard complements the stark white exterior. The courtyard creates ample room for Yoga or other activities. The outdoor of this Malibu home has a concrete deck to make room for al fresco dining, casual lounges, or BBQ hangouts. There's a staircase directly descending from this deck to the beach. The property conveniently has an outdoor shower, which the couple can wash off after using the beach.

The house has undergone renovation since it was first constructed. Its interior is well done in glass walls and shades of gray and white, with salmon accents for a modern minimalist style. Imagine waking up to such an immersive ocean view. The entire house, from the living room to the primary bedroom, floods with natural light and ocean views thanks to the floor-to-ceiling windows spanning nearly 280 Sqm.

The house living space has an open floor plan composed of the dining room and living room with a fireplace. The fireplace is a great way to warm up the interior occasionally. The open-plan living room and adjoining dining area have wood and stone floors. One notable thing about this living room is its restored dark wood floors that create an interesting contrast with the crisp white sofas. The kitchen countertop is granite with smooth-rounded edges. It sits next to the dining area, which overlooks and leads to the outdoor deck.

The kitchen has a vaguely vintage transitional interior design, giving off a 90s-cum-early-2000s vibe. Like the rest of the home, it has lovely ocean views. Additionally, it's well equipped with top-quality stainless steel appliances, stunning granite countertops, white cabinets, and plenty of space. Paris has used her kitchen in her show “Cooking with Paris” as well. 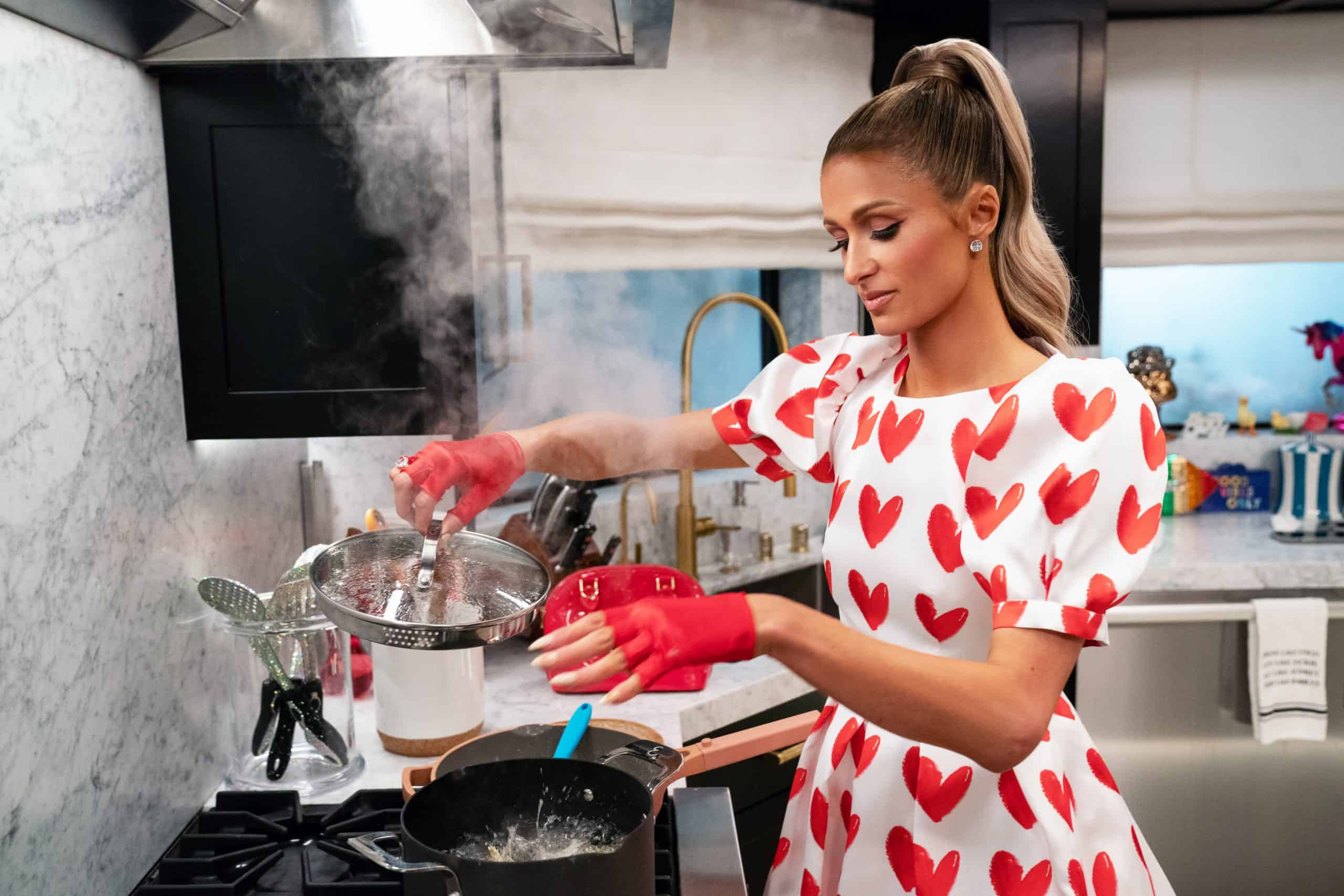 There are salmon-colored tiled stairs that lead upstairs. The first level houses the media room and laundry room.

There are three bedrooms, each with a balcony and fireplace. The primary bedroom suite has an extra fireplace, wooden floors, and a luxury-style stone-tiled bathroom. The main bathroom has a lavish built-in hot tub and dual vanities. 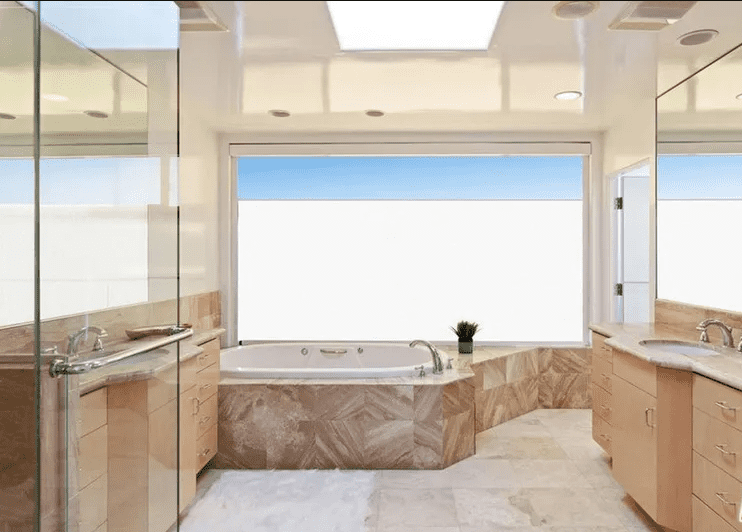 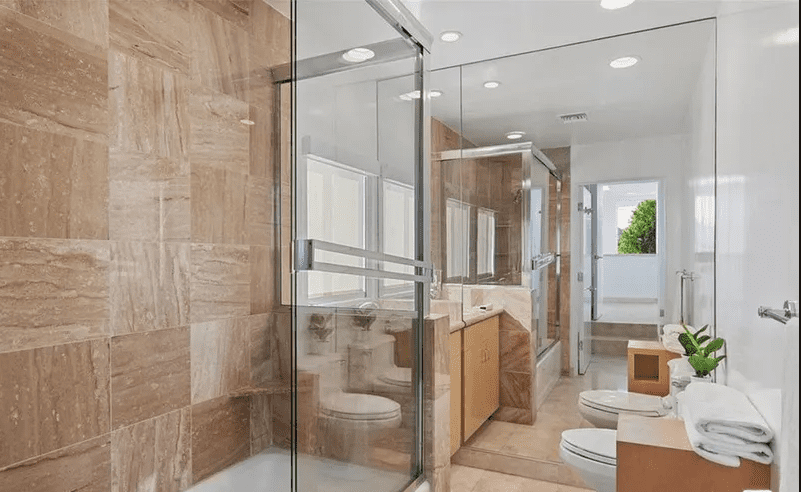 Overall, this is quite a lovely place to escape after a long day.

Besides this new Malibu house that the couple bought together, Hilton individually owns the property. For instance, she has her long-term residence in a gated community in Mulholland Estates, Los Angeles.

She acquired this stunning Mediterranean-style mansion in 2007 for roughly $5.9 million. Paris also owns a penthouse in New York City that she acquired in 2014 for $4.9 million.