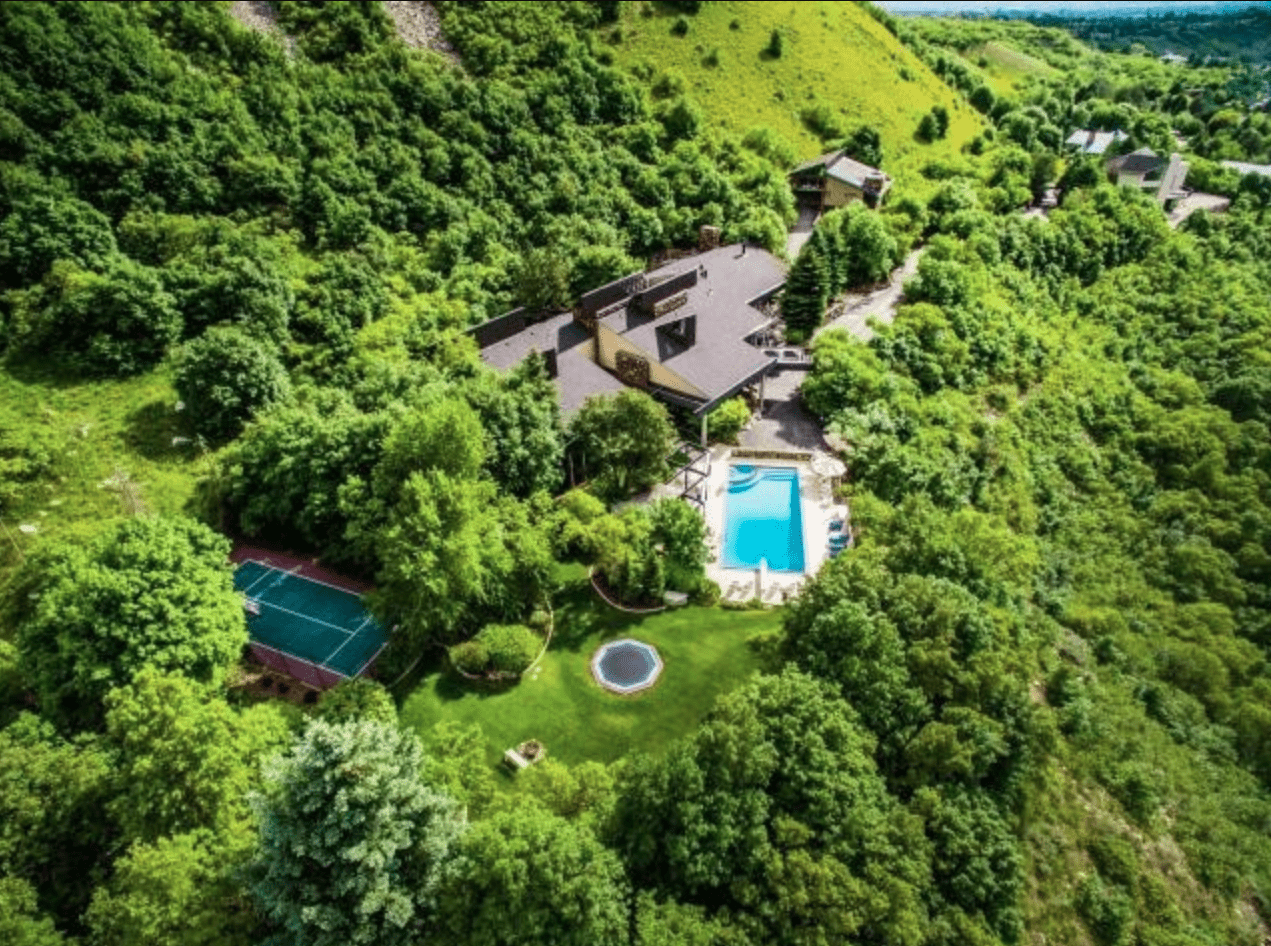 Where Does Post Malone Live? A Top Rapper’s Portfolio

Austin Richard Post, better known by his popular stage name, Post Malone, is an American singer and songwriter who rose to stardom in 2013. Malone is famous for blending different genres to create unique music, and he is also rightly famous for his unrepeatable variegated vocals. Having built a huge global fanbase, it is not hard to imagine many fans wanting to know where he lives. So, where does Post Malone live?

Post Malone currently lives in Utah. In addition, he also had rentals in Los Angeles and San Fernando Valley in, California. We have done quite some research to bring you more details about his homes, so keep reading for more. But first, here are a few details about Post Malone. 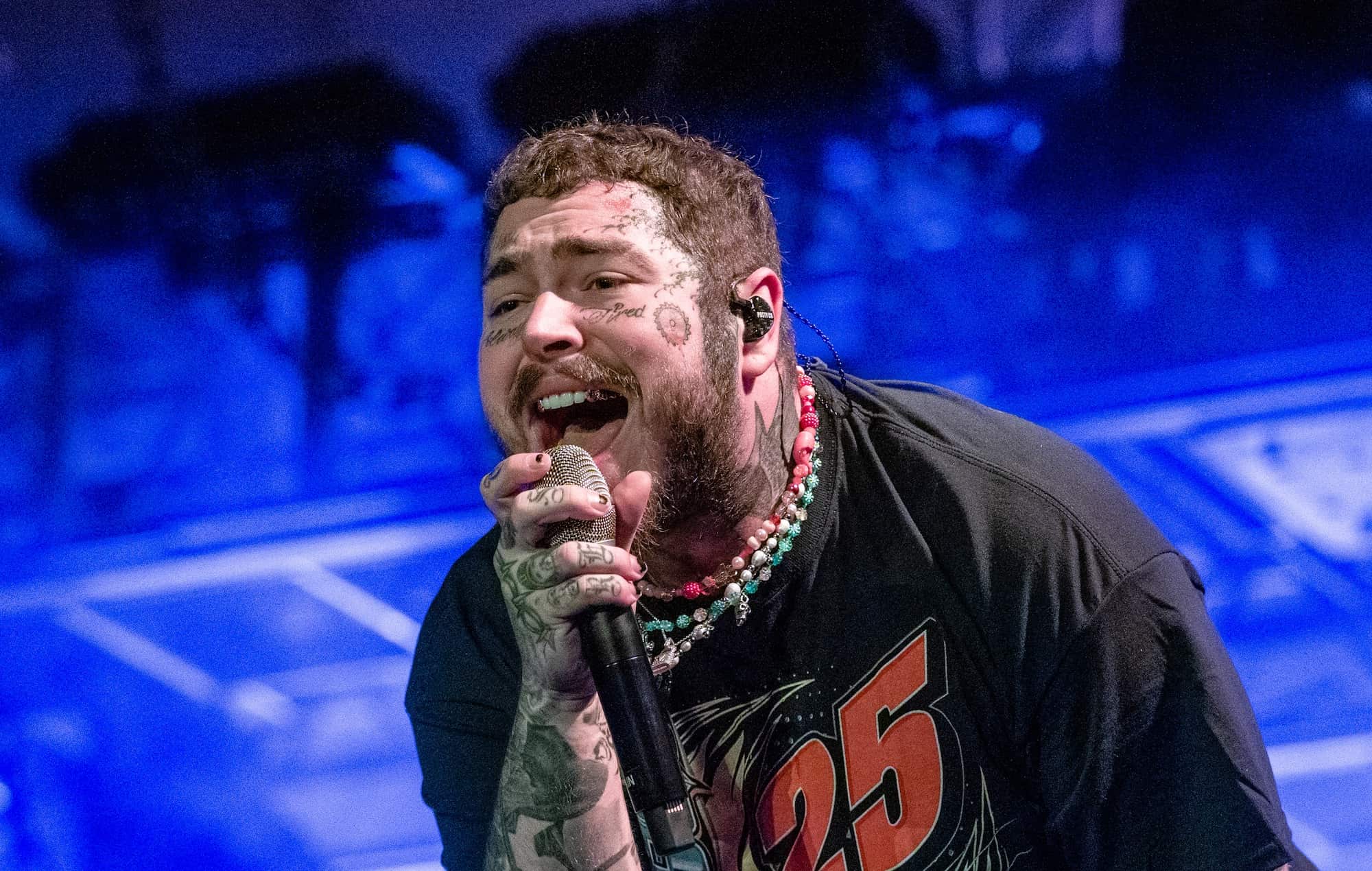 Post Malone is an American singer, songwriter, record producer, and rapper. He was born in Syracuse to a disc jockey for Dallas Cowboys, dad Rich Post and mom Nicole Frazier Lake. Born Austin Richard Post, he derived his stage name, Post Malone, by entering his birthname into a rap name generator.

Post Malone developed a liking for music from a young age. He notes that his DJ father introduced him to different genres of music, including hip hop, rock, and country. By age nine, Malone was already playing the guitar, but it was not until 2011 that he started creating music, and later gained musical recognition in 2013.

He released his first single, White Iverson, in 2015, and the song was an overnight hit, peaking 14th on the US Billboard Hot 100 and consequently gaining recognition from renowned rappers like Wiz Khalifa and Mac Miller. He signed with Republic Records a month after releasing the song and hitting one million views on YouTube.

Since signing with Republic Records, Post Malone has released many hit songs, collecting several awards and Grammy nominations along the way. In addition, he has also worked with renowned musicians like Kanye West, Young Thug, 50 Cent, and Justin Beiber, who he refers to as his close friend.

Since starting his musical journey, Post Malone has accumulated a huge net worth of around $45 Million, enough to buy some of the best homes in the country. So, let's discover the houses Malone owns or has lived in before. Post Malone owns a home in Utah that he bought sometime in 2018. The house is located in Salt Lake City, spans 13000 square feet, and sits on about seven acres of land. Malone bought the house for around $3,093,750 and currently lives there with his partner and child.

Malone has long been known to love Utah, having mentioned the state severally in his lyrics, interviews, and commercials, as well as proudly flashing his Utah driver's license severally. Unlike many other celebrities, Malone insists he wants to live a laid-back life away from the limelight. 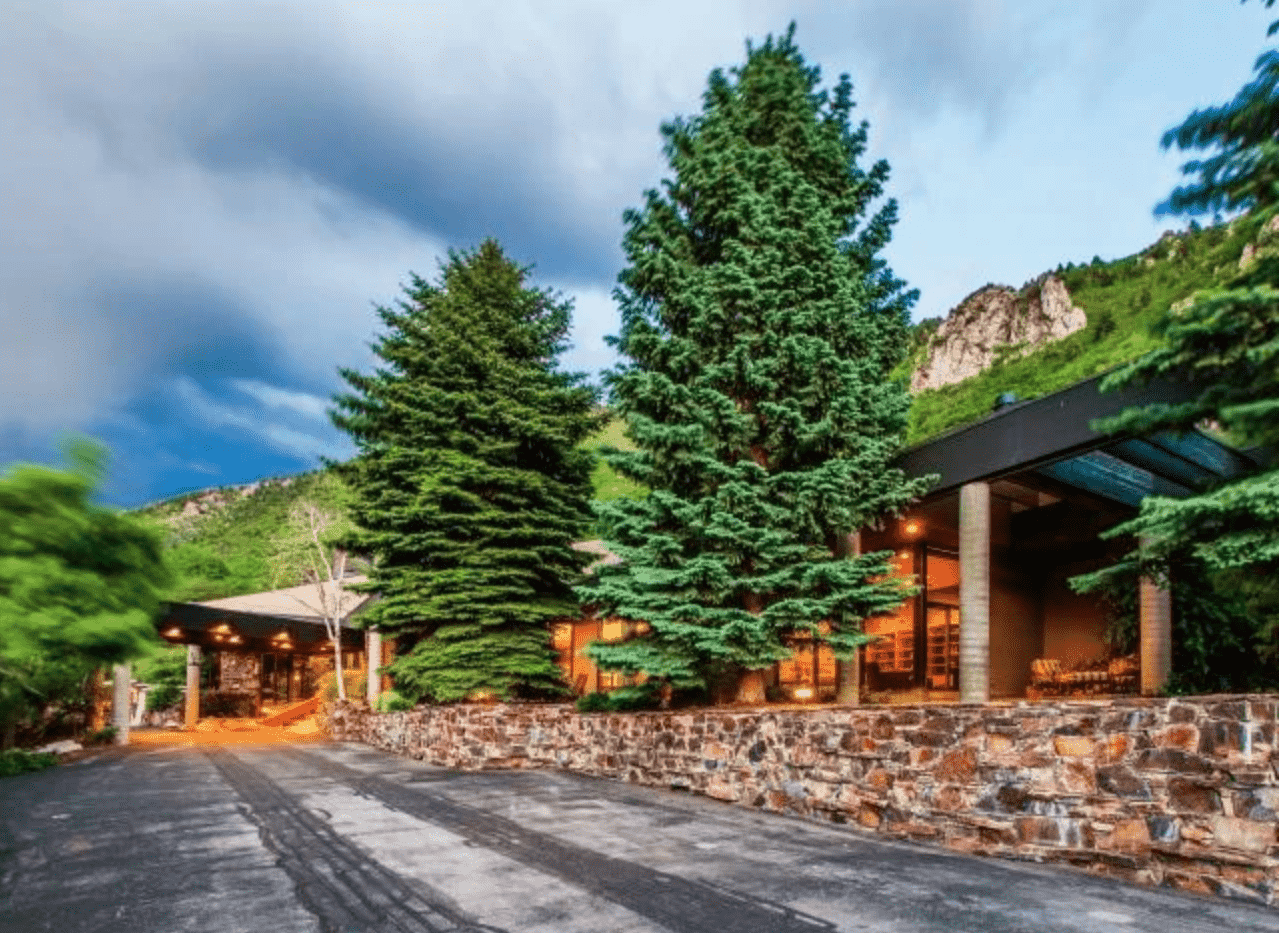 The home is perfectly situated overlooking the Salt Lake City skyline and with the perfect views of the State's beautiful mountain and canyon views. The house is quite secluded, with Malone terming it the Apocalypse House. 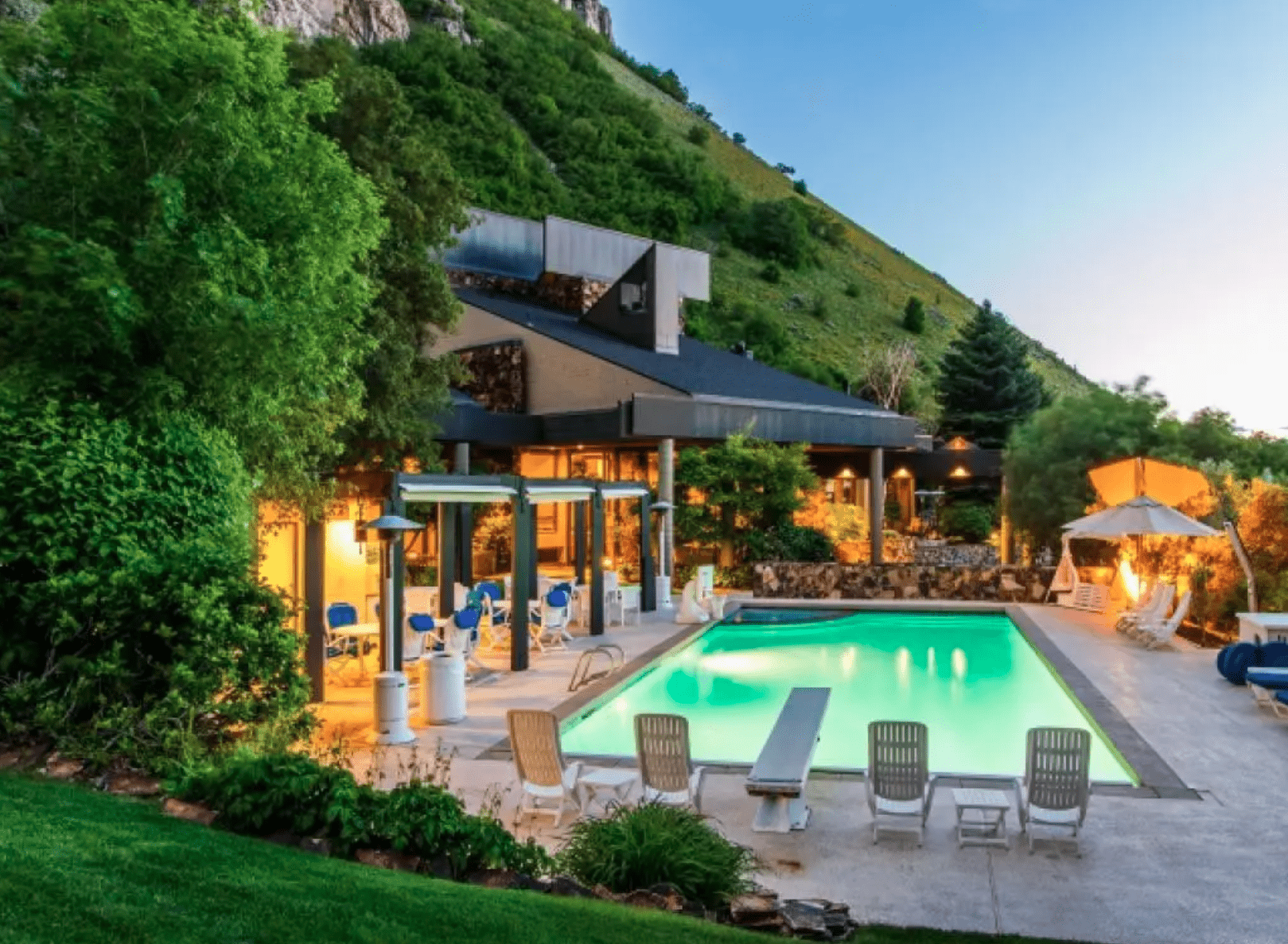 Post Malone's house has five bedrooms, seven bathrooms, and sports floor-to-ceiling windows in all quarters. This beautiful house was originally built in 1986, but it is believed Malone carried out several renovations to accommodate his private life and that of his friends.

The house sports a clean, spacious entryway, foyer, and living room area. It is also fitted with a gourmet chef's kitchen with high-quality appliances, including an inbuilt stove and a black dishwasher. The kitchen has a grey theme, and the wooden brown countertop invites a refreshing look to the room. 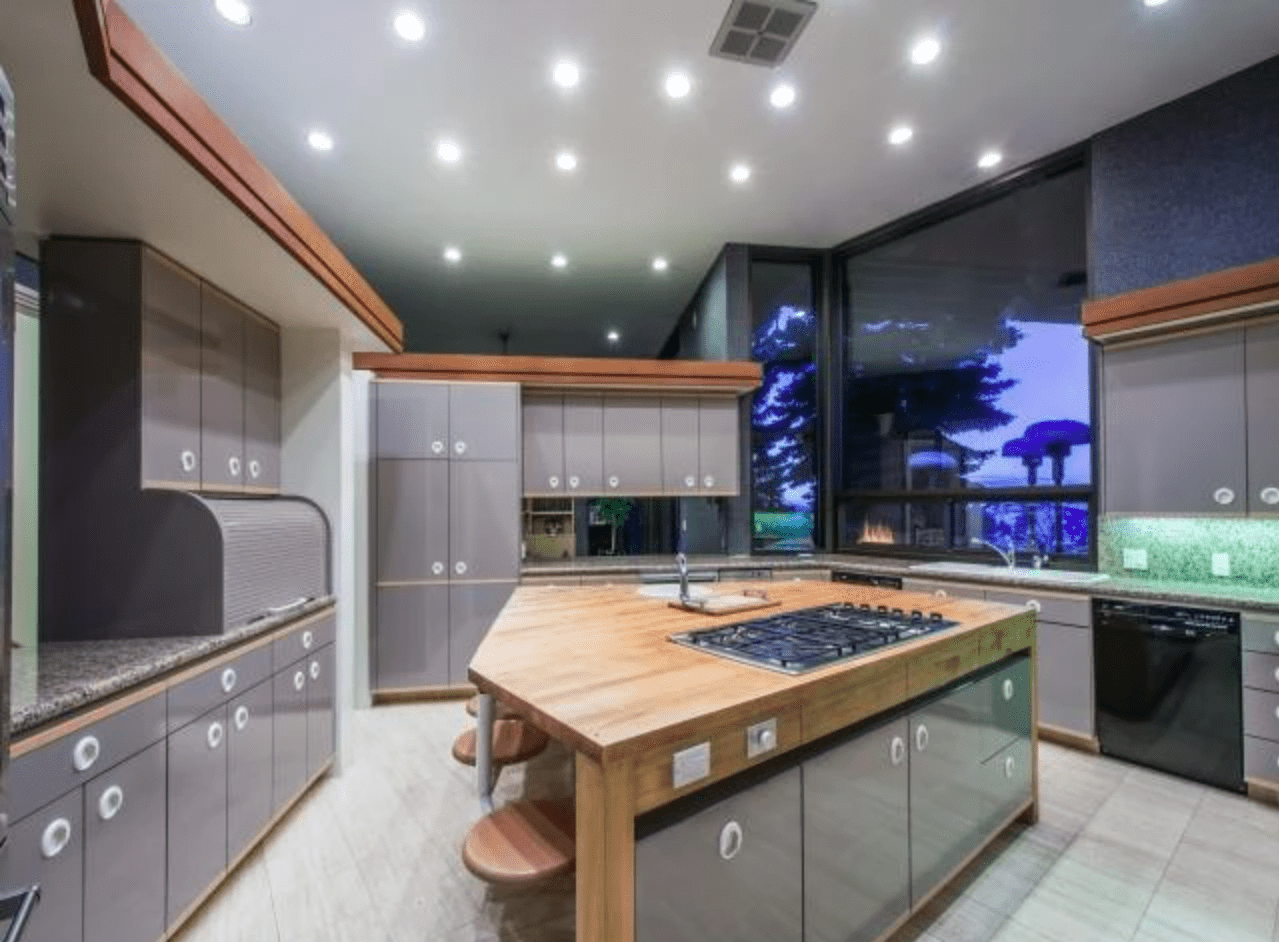 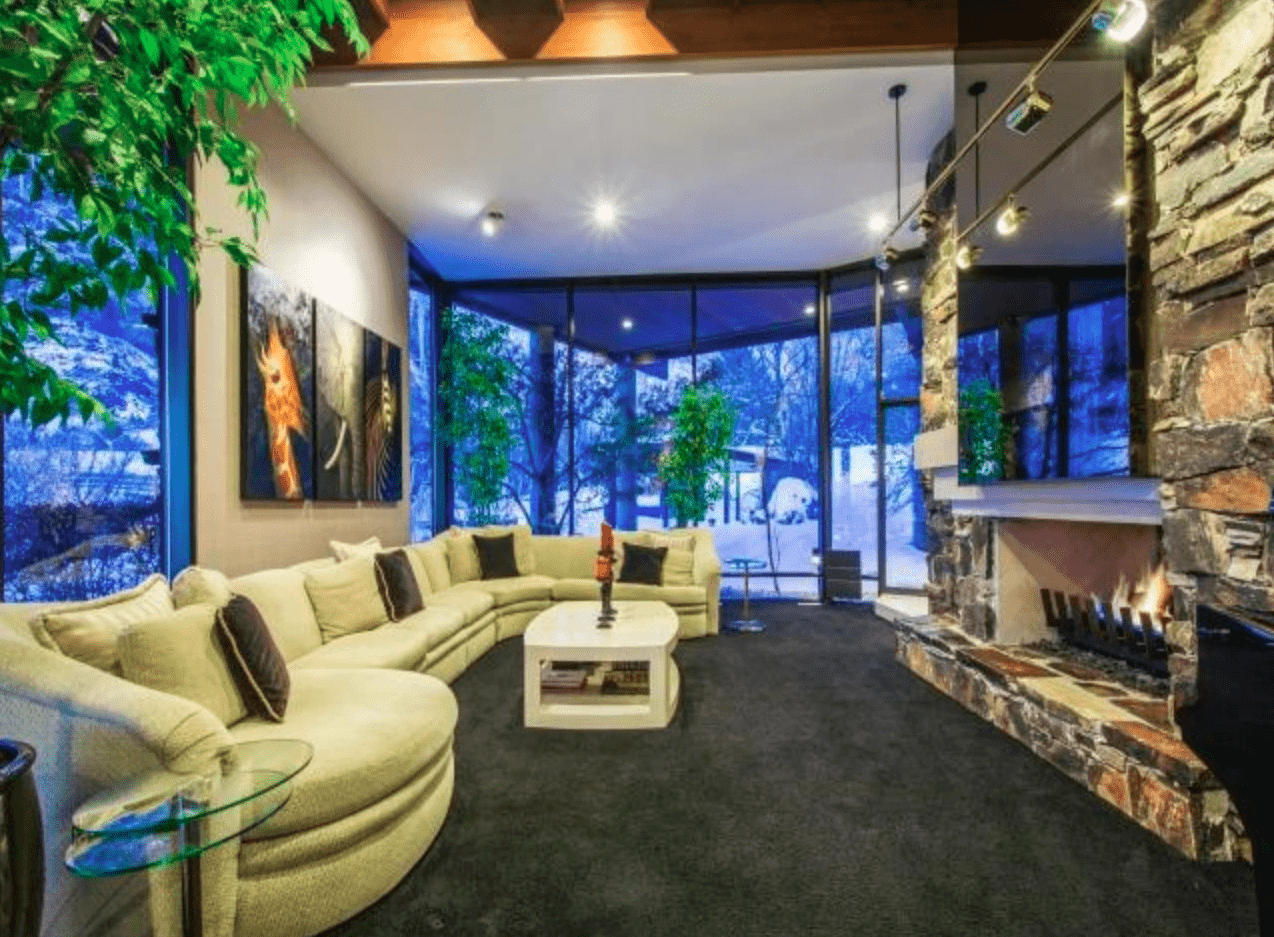 Elsewhere, the house also features a bar, a wine cellar, a home gym, and a separate workplace complete with a conference room. The outdoor area of the house is as impressive as the indoors. Firstly, a big outdoor fire pit is surrounded by chairs and overlooks the gorgeous canyons.

Then, there is a pool and a hot tub, plus an outdoor kitchen. Finally, the compound also boasts a basketball court ad separate guest quarters where Post suggested he'd install about 30 bunk beds for his pals. 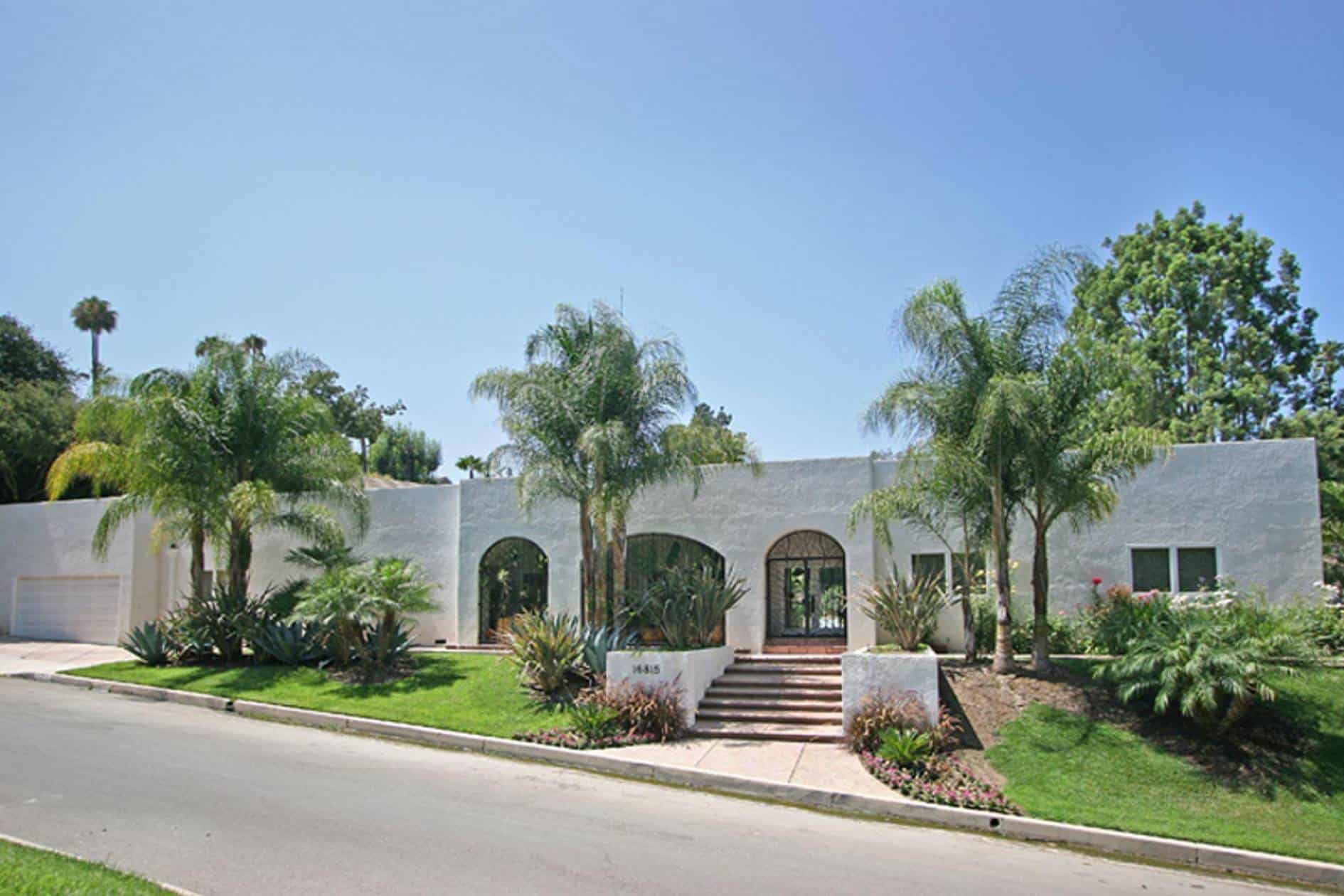 Post Malone lives in his dream Northern Utah home most days, but he moved there from a house in Los Angeles, where he had set shop for years for work purposes. He is believed to have rented a massive home for $12,000 per month from December 2017 to July 2018. 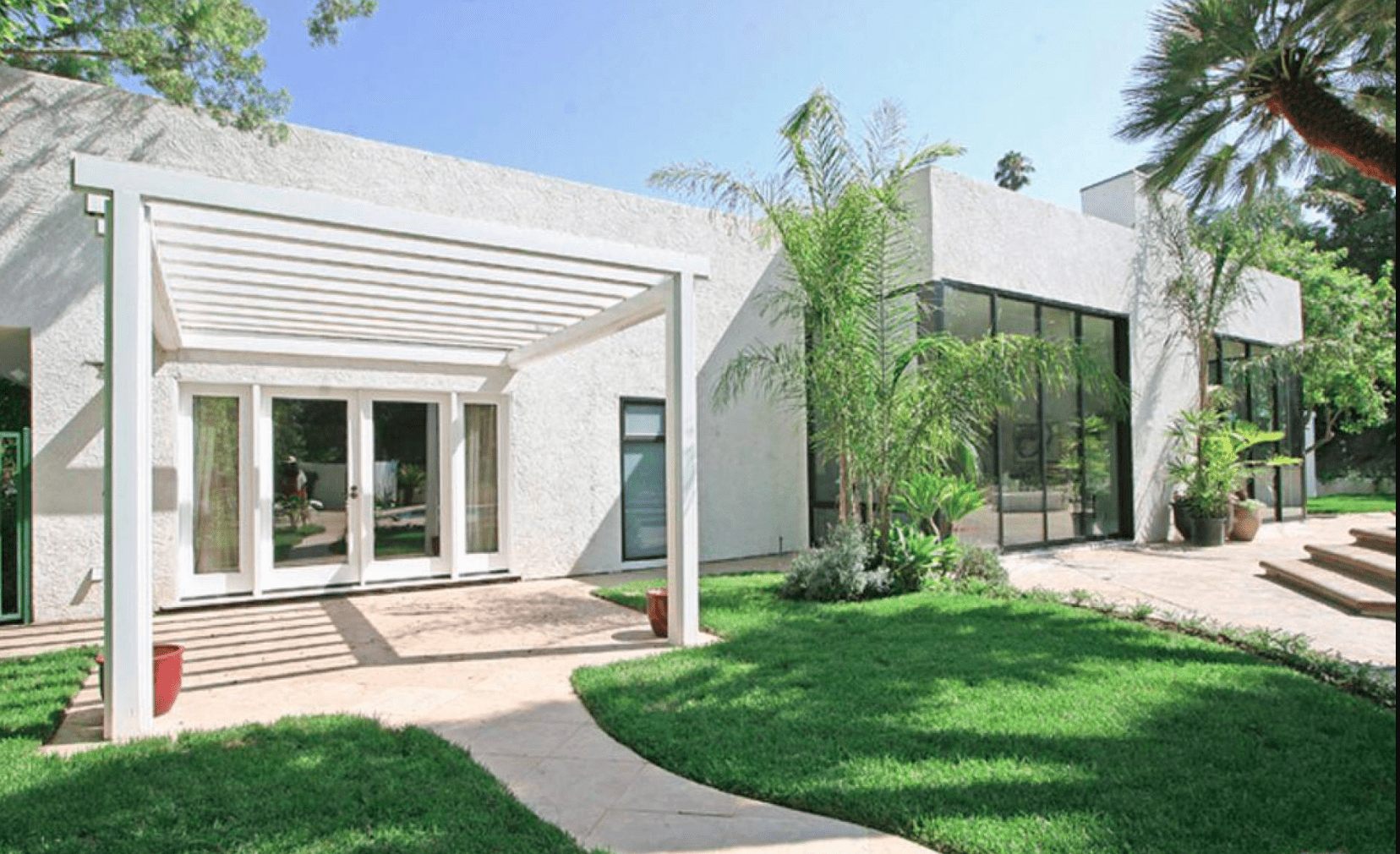 The house is located in San Fernando Valley, California, and is a 4,169-square-foot abode with 5 bedrooms and 4.5 bathrooms. This house was built in 1960 and sports a beautiful glass double-door entrance with green trees and fresh lawns for a truly welcoming site.

The entire home sits on 0.48 acres of land and sports clean exterior white walls and a massive swimming pool. In addition, there is a spa near the pool, an outdoor barbecue/patio area, and two parking spaces. 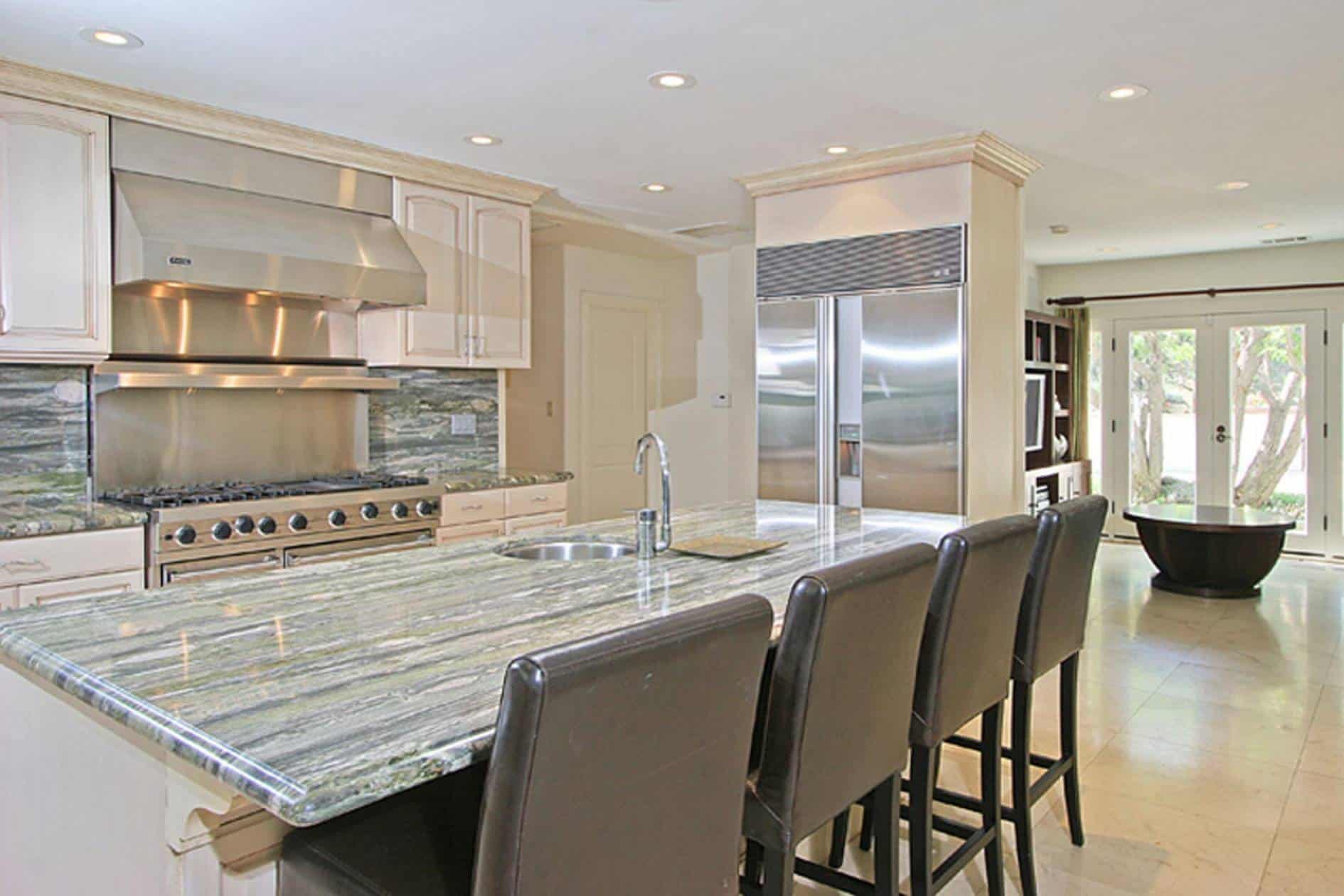 Inside is a modern gourmet kitchen with a Viking range plus granite counters. The open floor kitchen plan is visible from the dining area, which also sports modern furniture with a tall crystal chandelier. 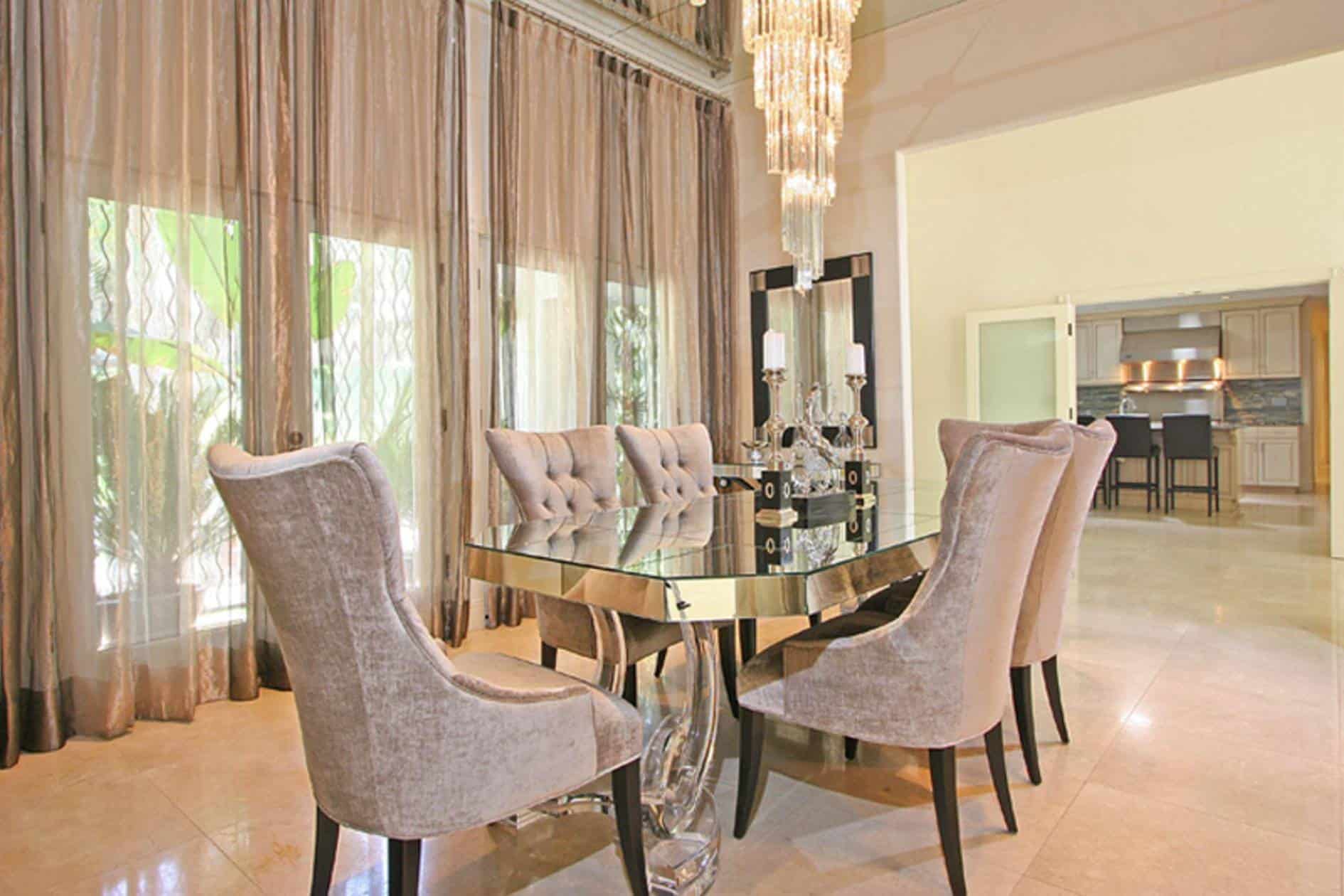 The interiors have high ceilings with white and cream wall paint. The sitting area features massive glass windows that keep the room bright, while a fireplace on one side keeps the room warm and homely. A look inside one of the bedrooms reveals wooden furniture, downlights, and a cream theme. 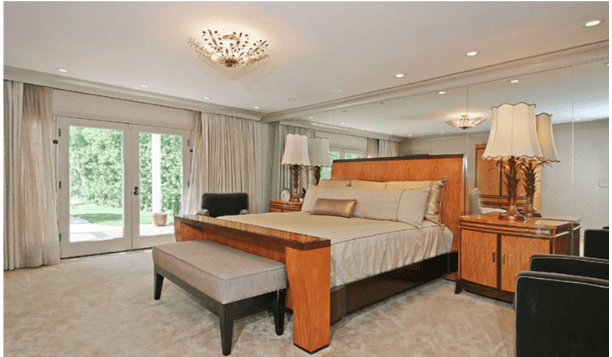 While Post Malone moved from this home in 2018, it made headlines in the same year when burglars invaded the house, believing the rapper still lived there. Even though they did not find Malone, the burglars still made away with $20,000 worth of cash and items. Beverly Hills is another area where most icons in the entertainment industry, including Harry Styles and Taylor Swift, own homes. So, it is no surprise that Post Malone also previously lived in the area, especially when his music career took off. He rented a modern home at 1201 Laurel Way that was later listed for sale in 2019, with a $26 million market rate.

It is a spacious 11,200-square-foot home with six bedrooms, seven bathrooms, and two half baths. The modern house features disappearing glass walls and sits atop a promontory, so residents get unobstructed views of Catalina Island, downtown Los Angeles, and the Pacific Ocean coastline. One of the most thrilling differentiae of this house is its primary suite which sits on the entire top floor. The spacious floor has a bedroom, private lounge, deck, and walk-in closet. In addition to the suite, this house sports a massive wrap-around pool with great views of the amazing sky and coastline. Other excellent house features include a home gym, an outdoor kitchen, a modern fireplace, a glass wine cellar, a movie theater, a guest house, and a secret Zen garden. The house's interior is modern, with very clean furniture, including the living room's white sofas, white walls, wooden, brown floors, and ceilings.

Two months before Post Malone was born, his father, Rich Post, purchased a three-bedroom and two-bathroom house in Baldwinsville, a village in the Syracuse, New York area. The two-story, 1300-square foot house sits close to the Seneca River and is still owned by Rich. The family lived here for 9 years until they moved to Grapevine, Texas.

Post Malone's second childhood home was slightly bigger than the first. It is a 1,685-square-foot house with three bedrooms and two bathrooms. 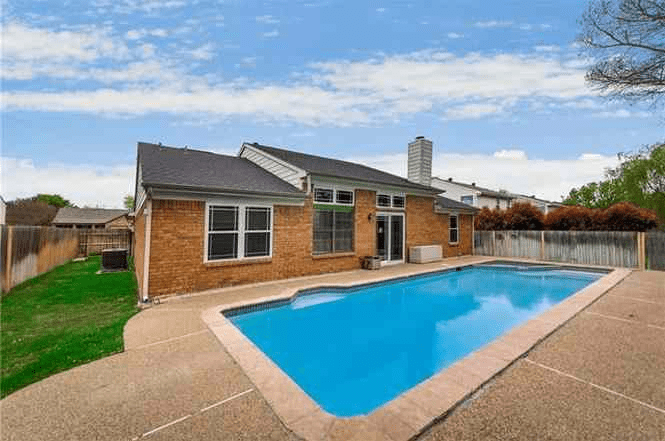 However, unlike the first house, the Grapevine home has a bigger parking space plus a modest swimming pool. Rich Post and Malone's stepmother, Jodie, sold the home in 2019.

Post Malone is one of the most talented and famous young artists globally, having entered the music scene in 2011, only to dominate it a few years later. With success, Malone amassed a lot of wealth that enabled him to rent some luxury houses before finally buying his dream home in laid-back Utah.

However, he came from humble beginnings in Syracuse, New York, and Grapevine, Texas, where he lived in modest three-bedroom and two-bathroom houses. Currently, he lives in his Utah mansion on a huge piece of land with top-class amenities, including an outdoor basketball court.